From £66,5009
There will only be 15 made, but is the GTS-R the final hurrah for the infectious Vauxhall VXR8? We've had an exclusive drive
Open gallery
Close
by Dan Prosser
22 August 2017
Share

The VXR8 GTS-R is the very limited-edition model that marks the demise of the V8-powered Vauxhall… probably forever. The VXR8 is really a rebadged Holden Commodore and, with Australian car manufacturing being wound down, the Commodore as we know it will soon be no more. If that wasn’t enough to kill off the VXR8, the Luton marque’s sale to PSA Group earlier this year would have done for the charismatic old brute anyway.

Vauxhall has been importing Commodores and sticking Griffin badges on them for a decade now and, before that, it did much the same with the Monaro coupé. So what we’re saying farewell to here - with Vauxhall’s most powerful car ever, no less - is 13 years of big power, V8-engined, rear-wheel-drive thugs. A sad day, indeed.

Just 15 GTS-Rs will be sold in the UK, so it will always be a proper unicorn car. That’s just as well because the £74,500 asking price - for a rebadged Commodore, remember - puts the car firmly in a territory that’s labelled ‘punchy’. A number of software and induction upgrades to the supercharged 6.2-litre V8 have lifted power by a very modest 11bhp over the VXR8 GTS, taking total output to 587bhp. Torque remains at 546lb ft. The VXR8 is a sizeable thing and weighs in at a rather chunky 1880kg.

Vauxhall quotes a 0-60mph time of 4.2sec and an electronically limited top speed of 155mph. A limited slip differential, torque vectoring by braking and enormous 410mm brake discs on the front axle are all there to rein in the monstrous power.

It's a limited-edition model, and that means limited chances to test it. We're the first publication to be given a run in the VXR8 GTS-R. So what did we make of it? 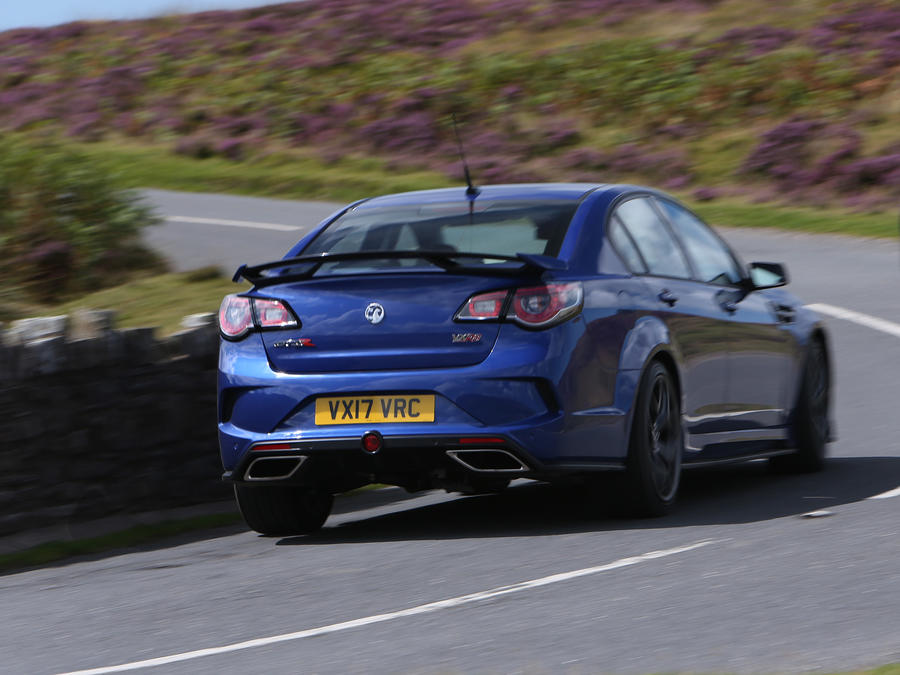 It’s completely unlike any other super-saloon, for starters. The more mainstream alternatives from the big German car makers all seem to favour four-wheel drive, twin-turbocharged V8s and paddle shift gearboxes these days, but the GTS-R adheres to a much simpler, more old-school formula. An automatic gearbox is available as an option, but this test car is fitted with a six-speed manual. The VXR8 is rear-wheel drive only, of course.

The cabin is certainly not befitting of a near £75,000 car, because many of the materials are plasticky and the fake carbonfibre trim on the dashboard is not at all convincing. But in terms of the more important stuff - seating position, the seats themselves, cabin space, visibility and so on - there’s very little to fault. The seats are big, plush comfy things that actually hold you in place very effectively.

In many ways, the GTS-R feels like a four-door GT car. Apart from the comfortable seats, the ride is quite accommodating, the drivetrain is effortless and the whole car feels very laid back, rather than being tightly wound or uptight. It would actually make an excellent long-distance machine.

When you twist the small knob on the centre console to select Performance mode, though, it becomes every bit the angry and exciting super-saloon the aggressive exterior styling suggests it is. The exhaust valves blow open so vocally at 4500rpm that it sounds as though the entire exhaust system has fallen off and the V8 boom that follows immediately after echoes for mile upon mile across the countryside.

The engine is a total monster, pulling through long gear ratios with an unrelenting force. That long gearing, incidentally, means the car actually finds very good traction - it isn’t simply a rampant wheelspin machine by any means. Dynamically, the car is much more game along a twisting moorland road than anything this big and heavy has any right to be. There's plenty of grip and a decent front end, but you do have to be patient with it. The body rolls in corners and heaves up and down over crests and compressions in a lazy and languid way, so you have to allow it to settle after one big input before it can deal with another.

Everything feels as though it’s wrapped in a layer of rubber. There’s a squishiness and a compliance to all the major controls and also in the way the suspension and steering operate. It means the GTS-R isn't an ultra-agile, super-responsive saloon like a Mercedes-AMG E63, but you can hustle it along a tricky road nonetheless. If you can match your driving style to the sort of pace it likes to flow along at, the GTS-R can be a huge amount of fun. 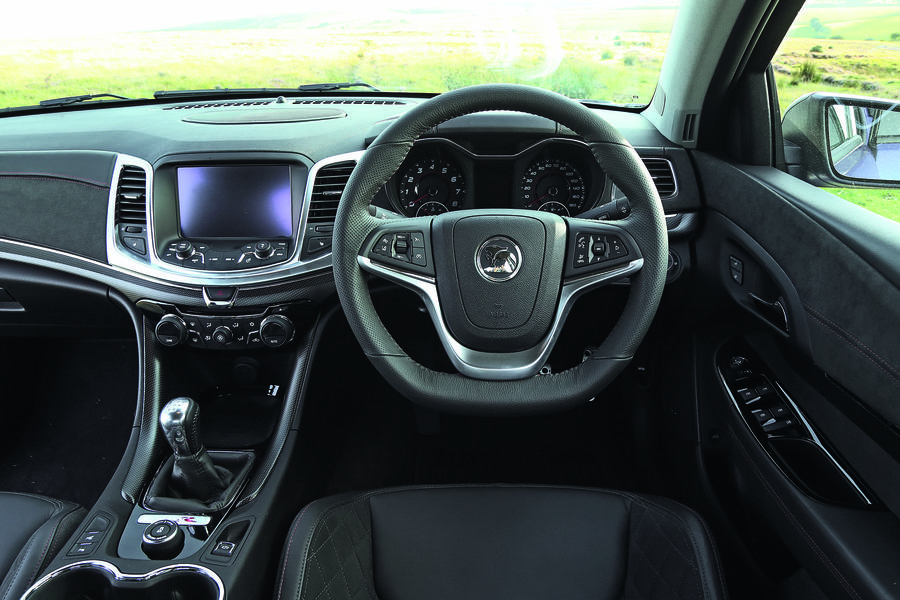 What the VXR8 GTS-R has on its side is character. The new BMW M5 will undoubtedly walk away from it across a moorland road, but it wouldn’t necessarily be more entertaining. There can’t be many people who are willing to drop £74,500 on something that looks quite so brash, but Vauxhall only needs to find 15 buyers. If you’re after a quirky and charismatic alternative to the super-saloon establishment, you should try very hard to be one of them. 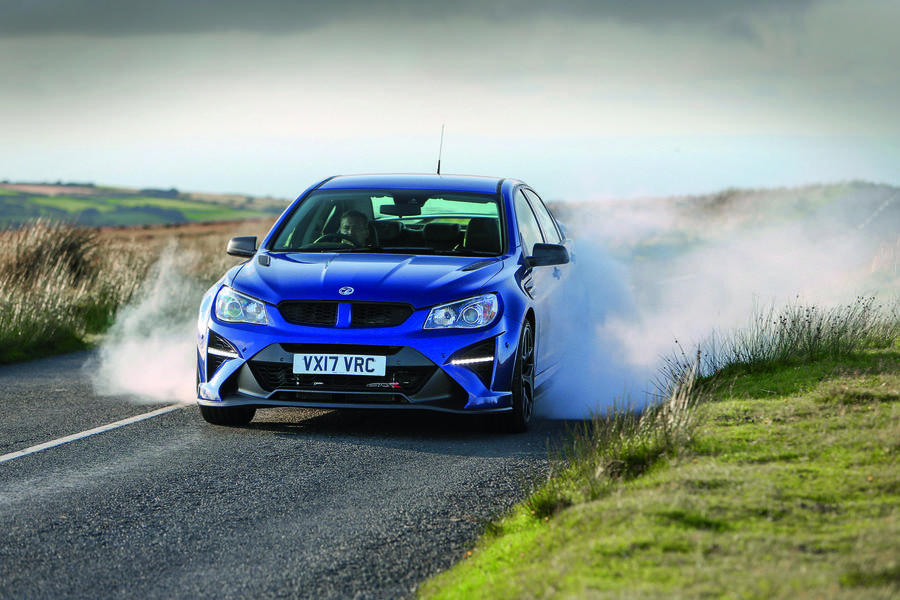 Four and a half stars?

Something tells me somebody got a bit carried away here. Better than the Germans when you factor in depreciation, fuel costs and badge appeal (for similar money)? Buy one with own your money? Quite.

Marc, interested to hear your comparison, it will be revealing to hear from an owner not a professional journalist about what the cars are really like. Hopefully you can see if there really is a hype bias. Although when I get a new car, it always seems better than the one it replaced as I have a natural bias for the new.

i would imagine it is difficult for journos to remain objective, as natural preferences will always creep in. I am sure they try to be balanced.

You guys criticized heavily the quality of plastics and infotainment system on the Alfa Stelvio as big shortfalls, enough to give it 3 ans 1/2 stars. This is a 75k car. Big boys territory.

I mean, that is quite entertaining... or pretty ridiculous. You choose.

I guess you could argue this

I guess you could argue this is a fairly unique model in the market and offers something genuinely different, so deserves to be judged in a different, slightly rose tinted way. The Stelvio on the other hand is a new model thrown in to a fiercely competitive sector so must be judged directly against it competitors. But I agree entirely that this publication in particular has been unfairly critical of the Stelvio. Reviews of it appear to have concentrated on the negatives and breezed over the positives, reviews of the F Pace have always been the complete opposite. Having recently owned an F Pace for 10 months and 17k, it's a car that cannot live up to the hysterical reception of this magazine has given it. We has a Stelvio on its was to us that has been on order for some months now. It will be interesting to get a direct comparison.
View all comments (8)