This is proof that the more traditional parts of the motor industry still have some serious catching up to do if they want their new EVs to be able to match Tesla.

The Performance is the ultimate version of the Model 3, for now at least, based on the existing Dual Motor model and sharing the same 310-mile battery pack. The significant difference is a punchier rear motor, which increases the total system output to 444bhp. Tesla claims that is good enough for a 3.3sec 0-60mph time, making it very nearly as quick as the fastest version of the bigger Model S.

My test car, driven in the US, was also fitted with the $5000 Performance Upgrade pack, which brought 20in wheels, Michelin Pilot Sport 4 tyres, lowered suspension and a higher top speed – 155mph against 145mph for the regular Performance.

Since my drive, Tesla has announced that it will include the Upgrade pack as standard in the US without charging any extra for them, meaning the Model 3 Performance now costs $65,200 - £50,000 at current exchange rates. 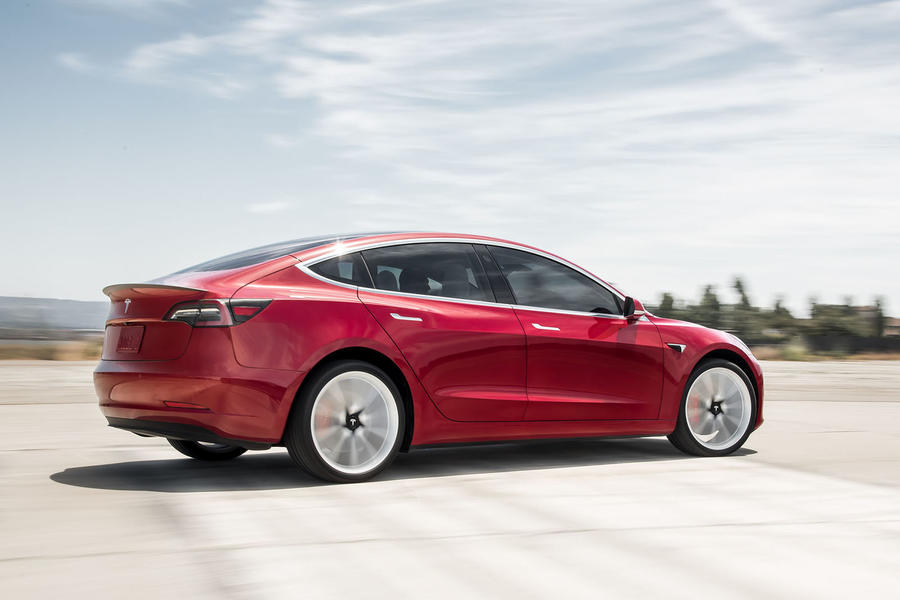 In a word, startling. I drove the Model 3 Performance just after experiencing the Dodge Challenger Hellcat Redeye for the first time and can honestly report that the acceleration of the Tesla is only fractionally less impressive than that of a supercharged 800-horsepower muscle car. But while the Dodge does its thing to a furious soundtrack, the 3 delivers its organ sloshing longitudinal G-forces without drama or apparent effort. The chassis can digest even stamped throttle starts without squeaking or slithering, and with no more noise than the whine of the electric motors.

Full bore starts are huge fun – it is impossible to experience one for the first time without muttering expletives – but they are far from the Model 3 Performance’s only trick. As we discovered when we drove the regular car for the first time earlier this year, the quality of engineering in the 3’s powertrain and chassis runs much deeper than the brand’s detractors would have you believe. The Performance is as impressive being driven gently as it is giving it all.

The speed of response is outstanding, illustrating the biggest difference between a brawny EV and an internal combustion performance car. The Model 3’s throttle response is effectively instantaneous and the lack of a gearbox means there’s no delay in the drivetrain: every throttle input is translated into immediate effect, acceleration arriving as quickly as your toe can move. Even a conventional car capable of matching the Performance’s 0-60mph time would never keep up on real-world acceleration.

On Michigan backroads, the Model 3 stayed impressively flat under hard cornering, although tighter sequences do make its considerable mass feel obvious: 1850kg on Tesla’s US numbers. Yet it always feels a measure more agile than the staid Model S when asked to change direction quickly, with some active torque management helping it to turn and hold a line effectively, if with little sense of driver involvement. The only thing that seemed to unsettle it was the combination of a big bump and a loaded-up bend, with a brief moment of indiscipline as the wheels unloaded. It was certainly the first time I’ve encountered power-on oversteer in a Tesla.

The rest of the Model 3 remains true to the brand's established values. Arrive in the cabin straight from a similarly sized upmarket model and the interior will feel minimalistic to the point of being empty. It certainly takes a while to get used to the delegation of almost all functions to the vast central touchscreen, even the glovebox needs to be opened via it. The more traditionally minded would probably appreciate a few more conventional buttons, not least of all for the heating and ventilation functions. But this is Tesla's way and – in the manner of the deliberate distinction that used to be made between Apple and Window operating systems – customers seem to like it. 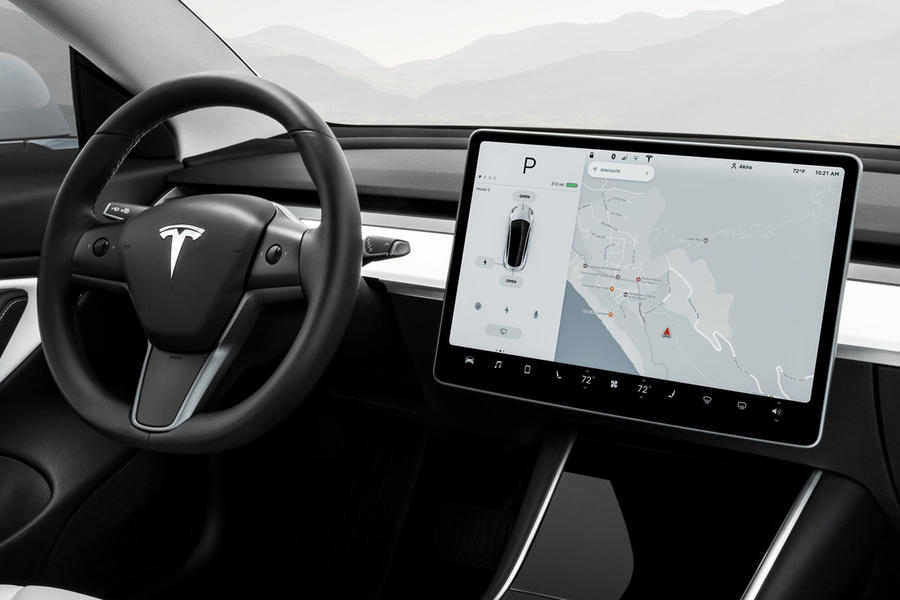 It's hard to write about any Tesla without falling into the seemingly unbridgeable chasm that separates the company's lovers from its haters, and which expects all reviews to share the same binary separation.

The Model 3 has yet to deliver on Elon Musk's promise of genuine affordability and the promise of $35,000 lead-in pricing; as the most expensive variant of what was meant to be the brand's cheapest car, the Performance might seem to be heading in the wrong direction.

But it is also a timely reminder that, as long-established OEMs ready pure electric models, the world currently contains only one upmarket EV maker with a proven track record of selling a significant number of cars.

Any rival wanting to beat the Model 3 is going to have to be very good indeed. 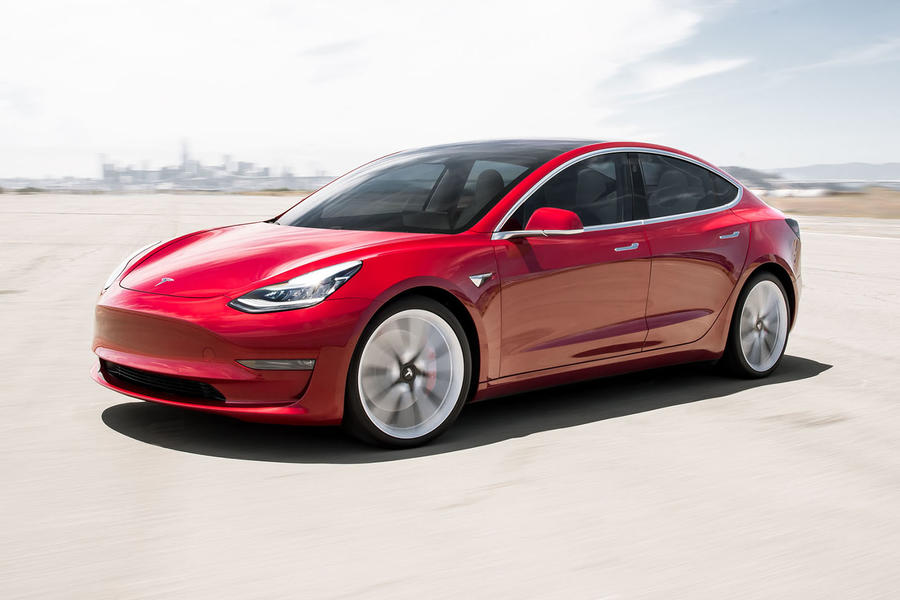 Tesla just gets better and better

Some mags in the US are timing these at 3.2 secs with different tyres. And even round a race circuit they're not that far behind top Alfa's Giulia.

As to UK devlivery times, well maybe this year but as they say somethings are worth waiting for.

Some mags in the US are timing these at 3.2 secs with different tyres. And even round a race circuit they're not that far behind top Alfa's Giulia.

As to UK devlivery times, well maybe this year but as they say somethings are worth waiting for.

"top Alfa's Giulia"...usual but even more unusually mangled English, devoid of sense, forethought and lucidity...what the **** is "devlivery"? TwIT, the w is silent, as you SHOULD be.

6 November 2018
I feel as though the Model 3 is the only car I'll need for at least another 10 years. It looks great, spacious, cheap to run, has perfect dimensions for UK roads, is rated as the safest production car ever made, and now it accelerates fast enough to make you feel sick. Top effort.

........not mentioned anywhere at all in this article, let alone a more nuanced disciussion of how it might be affected by different driving styles and the exercise of that performance.

Claimed 300 plus miles but

Claimed 300 plus miles but probaby around 240-260 in real world driving if the temptation to nail the throttle doesnt occur too often.

Claimed 300 plus miles but probaby around 240-260 in real world driving if the temptation to nail the throttle doesnt occur too often.

The 310-mile range claim is on America's EPA testing cycle, which is much closer to real-world than our NEDC or WLTP tests. 300 should be easy for light-footed drivers, 240 would be more representative of motorway/freezing/'spirited' drives.

Those are all with the standard 18" aerodynamic wheels, so knock off 10% if the car's equipped with 20"s.

Actually 310 miles is actually quite conservative and achievable even at motorway speeds (70MPH). It's much more real-world accurate than what other automakers are claiming, e.g. Jaguar i-Pace's range is around 30-40% lower than the claimed figure. At constant 45MPH (the way that Jaguar has apparently measured it) Tesla Model 3 can go ~400 miles non-stop.

Sonic, who has made that claim, and in what way is it the “safest production car ever made”?

Safer than a Volvo? It’s a bold claim and I’m asking a genuine question.

Maybe one of the safest would be a better term. Basically it received 5 stars in every test (12 or so I believe) conducted by the NHTSA in the states.

Sonic, who has made that claim, and in what way is it the “safest production car ever made”?

Safer than a Volvo? It’s a bold claim and I’m asking a genuine question.

Volvo - OMG they dies years ago - back when they made a model cvalled the Amazon. Today they are just another Chinese trinket. Please dont be silly and come into the future VOLVO is NOT and has NOT been the safest car for decades