From £29,0307
Endearingly capable and decently equipped Rexton would be a no-brainer with more spring in its step
Open gallery
Close

There’s no confusing this facelifted Ssangyog Rexton with its predecessor, is there? With a colossal chrome-clad grille that wouldn’t look out of place on a BMW designer’s mood board and sharp new LED headlight designs leading the visual refresh, the latest iteration of this seven-seat SUV is said to bring “more presence, more prestige, more strength, more safety, more style and more space”.

Under the skin, the headline enhancement is a 20bhp power hike from the 2.2-litre diesel engine, while the old Mercedes-supplied seven-speed auto ’box has made way for an eight-speed item from Hyundai Transys, said to weigh less and bring improved efficiency. There’s a new trailer sway control function, too, which we don’t really need to explain, and various modifications for the engine mounts and door seals that mean the Rexton now “boasts some of the lowest NVH levels in its class”.

Changes inside are more subtle, though a digital display is now fitted as standard and the centre console has been redesigned for a cleaner look and extra storage space.

The no-nonsense line-up comprises two trim levels: Ventura, from £37,995, and Ultimate, from £40,665. We drove the latter, which adds to the already impressive standard kit list with a larger 9.0in infotainment display, rear privacy glass and LED ambient lighting throughout the cabin. 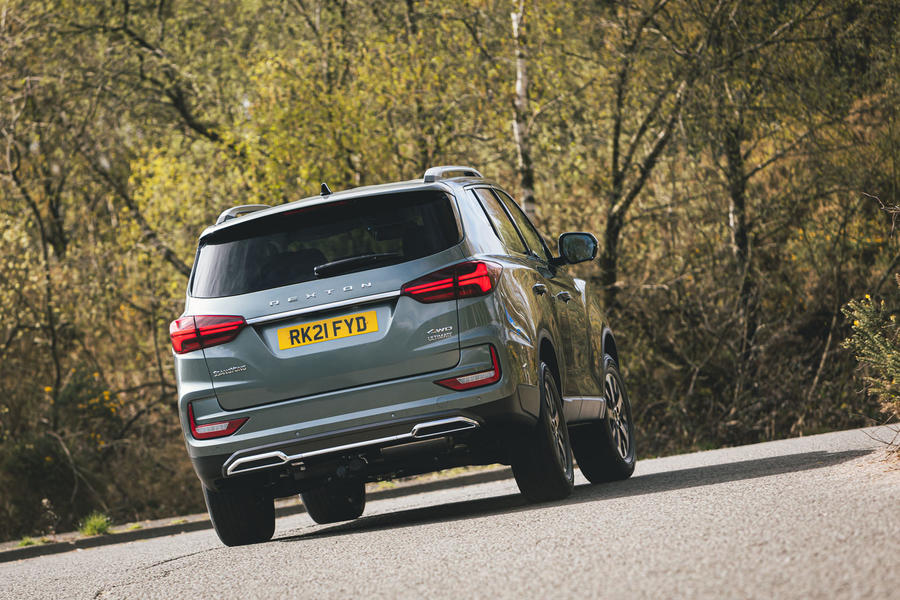 It remains among the largest SUVs on sale today, measuring 4850mm long by 1960mm wide and 1825mm high, and you feel every millimetre when threading it into supermarket parking spaces. But it’s not half as unwieldy as you’d fear when gawping up at its window line for the first time; expansive windows, chunky mirrors and slick, clear cameras at each end enhance visibility and promote low-speed confidence, and the lofty seating position allows a clear view over, say, hedges and into neighbouring buses. So far, so surprisingly usable.

But unfortunately, the Rexton is among the last of a dying breed of ‘proper’ body-on-frame SUVs, and while that’s good news for its rugged dependability and off-road competence, it also means it rides far less compliantly than similarly sized monocoque-bodied equivalents on Tarmac.

You know it can clear a speed bump at quite some pace without even breaking a sweat, but so severe will be the resulting jolt that you’ll approach the next one slower than you would even in a low-slung sports car. On pockmarked stretches of motorway, too, the firm suspension and noisy, chunky tyres quash any illusion of this being a cut-price Range Rover alternative, while the vague steering and high sides - susceptible as they are to gusts of wind - give the lane change collision warning a real workout.

More pleasingly, its torquey 2.2-litre turbodiesel – producing 20bhp more in this updated car – is agreeably unobtrusive until the upper reaches of the rev range, and provides ample grunt off the mark. Poise and pace, you understand, are not what we’re here for, but onward progress is not the clattering, teeth-grinding chore it might be in a similarly powered pick-up truck, for example, and with 33mpg showing after a 40-mile motorway schlep – it is rather less hard on the wallet, too.

The new gearbox is worthy of merit, too; it changes snappily and sensibly, never lingering too long on the cusp of a ratio – as can so often be a pitfall of these low-end-oriented diesel powertrains.

The Ssangyong’s plethora of cabin niceties – especially those that come with top-spec Ultimate trim – don’t lend themselves to the ‘hose-down and forget about it’ lifestyle to which this sort of utilitarian SUV is so often subjected, but they do help to give a degree of panache to what is otherwise a car that goes much bigger on practicality than it does prestige. The seats, for example, are of the nappa leather variety (ventilated and electrically adjustable, at that), there’s LED mood lighting and the dashboard padding is gratifyingly soft to the touch.

Add to that an infotainment offering far more intuitive and capable than a good few mainstream alternatives, and the fact that you could park a Toyota Aygo (lengthways) between each row of seats, and it’s hard to deny the Rexton’s appeal as a wholly usable, and even premium-feeling, family bus. Sure, there are a couple of quirks you might not find on, say, a Toyota Highlander (the controls for the dual-zone climate control seemed to be reversed on our test car, the Bluetooth simply would not play ball and the passenger seat adjustment controls are inexplicably mounted where only the driver could reach them), but nothing that would truly muddy the ownership experience. 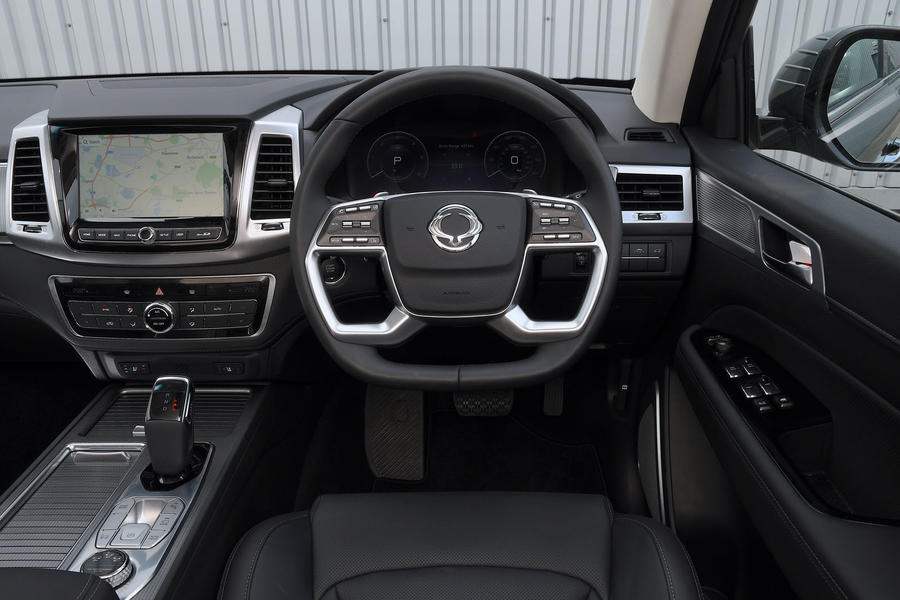 It’s difficult to work the Rexton out. On one level it’s a countryside dweller’s best friend, but on the other it’s priced closer than you’d expect to more refined equivalents, its remarkable bulk makes it tricky to negotiate tight rural lanes, and although its many concessions to modernity and – dare I say it – luxury are very welcome at this price point, they do rather confuse its positioning.

But of the few old-school, full-sized SUVs that remain on sale, discounting pick-ups, the Rexton is appealing in no small degree courtesy of its cavernous interior and impressive drivability. At the risk of courting controversy, I would suggest to those bemoaning the upmarket reinvention of cars like the Land Rover Defender and Mercedes-Benz G-Class that this is the capable, capacious, few-frills, 4x4 family tank you’ve been crying out for. Have at it. 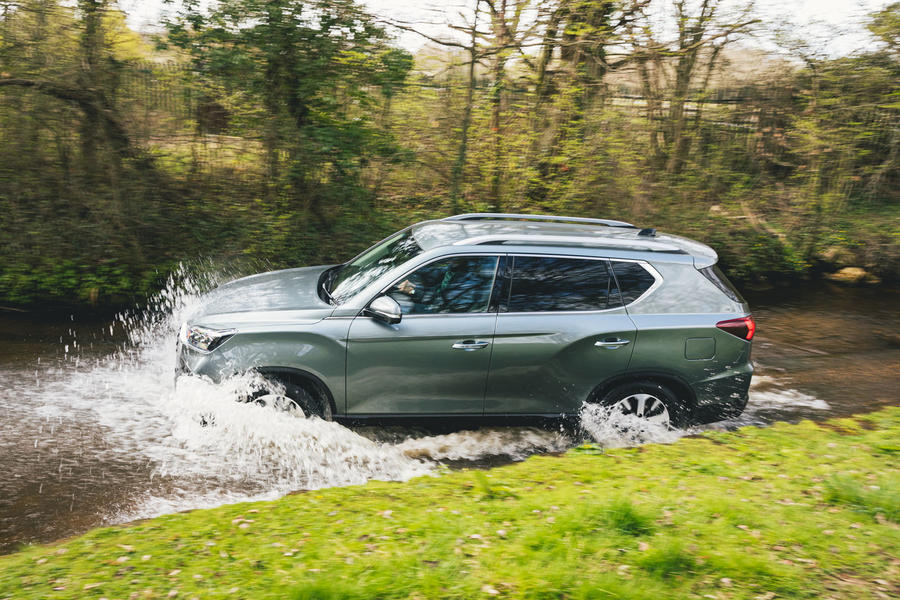 Log in or register to post comments
FastRenaultFan 12 May 2021
It's a great car for that price and a good looking car too that is also very good off road. I for one don't believe it would crash going over speed bumps. More chance of and Audi doing that. The ride in modern Audi's is terrible.
ianp55 12 May 2021

The Rexton is a meaty sort of 4x4 with a bags of interior room room plenty of power with off road capability and excellent build quality,if this is what you want the only other choice is the eternal Toyota Landcruiser which is now getting a bit expensive nowdays. Although the interior of the Ultimate model is quite appealing,personally I'd stick with the entry level EX manual version which at a fiver under £30K is splendid value,according to on the Ssangyong web site seven seats on this version is a no cost option as well.so yes if I was looking at this type of vehicle the Rexton would definitely be on my list.

@tommy, think the last one started around that price, but you are completely right. You can pick up non facelifted versions brand new for about that on Autotrader