If you look at the ingredients on paper, the Smart Fortwo Brabus cabrio can be made to sound quite tempting. After all, it’s a rear-engined, rear-wheel drive two-seater that’s available for less than £20,000. According to Smart, it’s ‘the urban sports car’.

It may have just 898 cubic centimetres to push it along, but power has been increased to a fairly healthy 108bhp. With a kerb weight of just 1040kg, that’s enough to give it a 0-62mph time of 9.5sec, although an electronic limiter calls time at 102mph.

To help cope with the additional 20bhp you get over a non-Brabus Fortwo, there’s sports suspension and steering, retuned electronic stability control (ESP), plus bigger wheels with wider tyres. As for gearbox, there’s no manual option, just a dual-clutch automatic.

If you’re expecting the boffins from Bottrop to have transformed the way the Fortwo goes, then you probably don’t have a very good grasp of the laws of physics. No matter how you tune something so short, tall and wide, a sports car it will not be.

Yes, the Brabus feels more planted than its cooking relatives, and it can be hustled round corners faster than most other road users would expect. Even so, you won’t be exploiting the car’s rearward weight bias and rear wheel drive. The ESP may have been recalibrated, but it still kicks in early and sometimes abruptly.

That said, its quick, if inert, steering and large amount of lock mean it’s great for darting around town and has a ridiculously tight turning circle. The Fortwo Brabus feels nervous at speed, however, with even small steering inputs having a big impact on the car’s trajectory; it’s also easily upset by bumps. 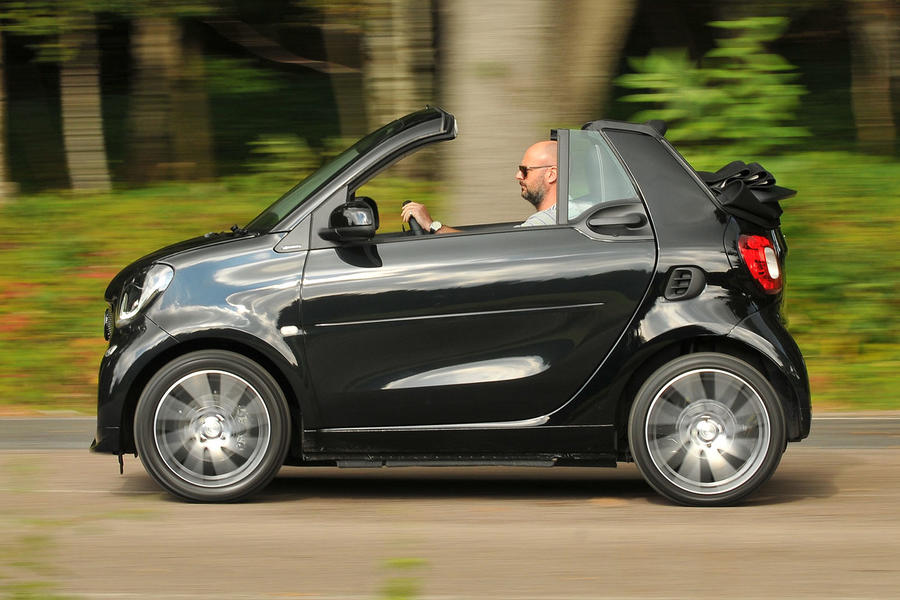 Not only do surface imperfections rock the car to and fro, they reveal a structure that isn’t overly stiff. Even with the roof rails in place, you’ll feel – and see – the steering column shimmy in your hands and the rear view mirror shudder. Take the roof rails out and, while it doesn’t get a great deal worse, it’s still a lot more flexible than the likes of the similarly priced Mini Cooper Mini Convertible.

As for pace, it’s quick enough to do quite well at the traffic light Grand Prix and can easily maintain motorway speeds. We could argue that something wearing the Brabus badge should be quicker still, but the thought of an even faster Fortwo is more than a little bit scary.

We suspect some revisions to the gearbox would make it more responsive. It may be significantly better than the automated manual found in previous Smarts, but it can still be sluggish to respond and doesn’t shift as quickly or smoothly as the best dual clutches. It’s better in manual mode, though. 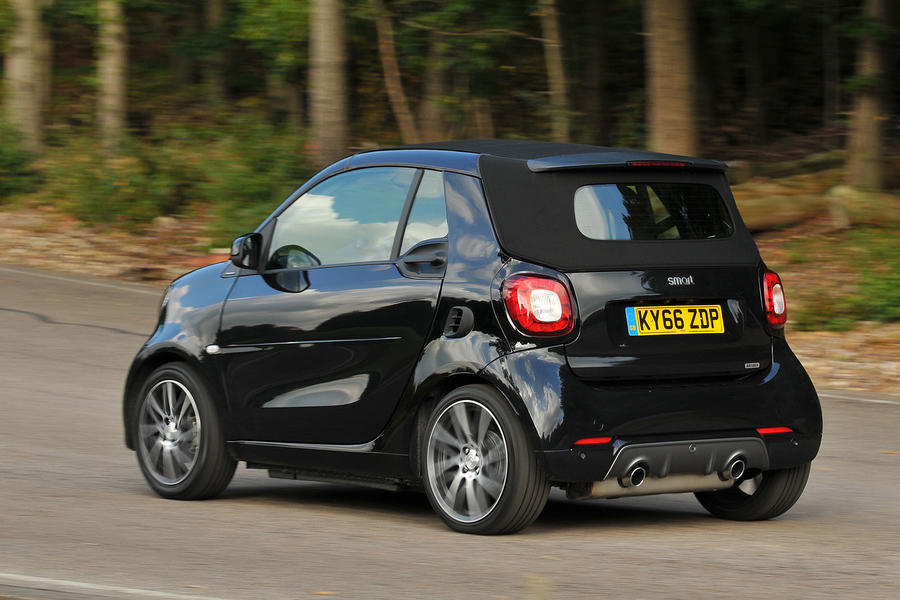 Inside, there are plenty of additional reminders that you’re in a Brabus Fortwo. Both the handbrake and gear knob are wrapped in leather and Brabus-badged, there’s a sports steering wheel and on xclusive trim level you get leather seats and a leather-effect dashboard.

At first glance, it looks funky enough, but further investigation reveals a lack of quality that seems out of place in such a comparatively expensive car. The gearstick and handbrake lever look rather like they've come from Halfords, there are too many hard plastics and the infotainment system can’t hide its Renault roots.

Getting the roof off can be as easy as pressing a button to retract or erect the canvas top with the roof rails in place. If you want more wind in your hair, you can unclip the roof rails relatively easily. The trouble is where to put them – they might fit in the boot, but you won’t have room for much else. Leave them at home and you risk getting wet. 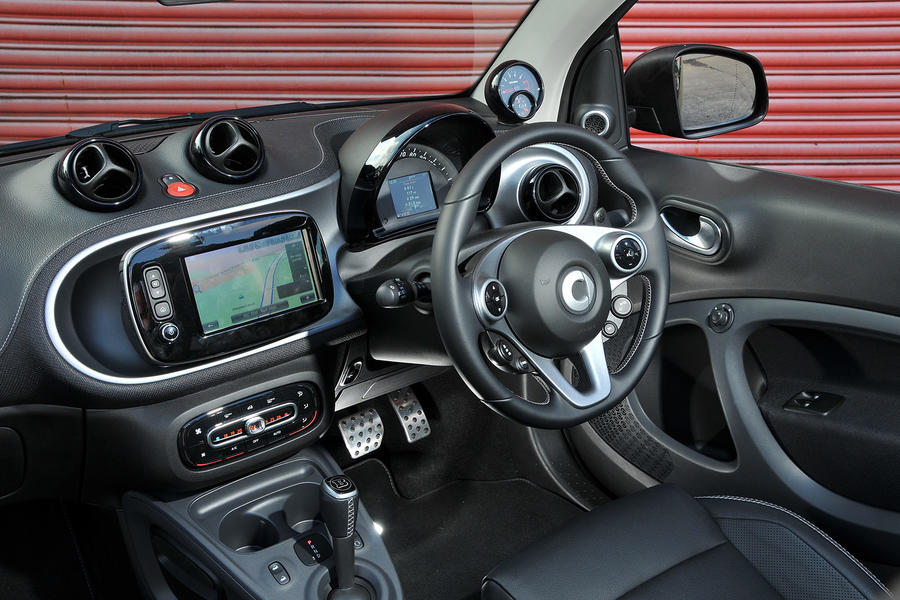 In the right environment, the Smart Fortwo Brabus can be quite a giggle. It’s noticeably quicker than the most powerful regular Smart, handles better and is just as manoeuvrable. Unfortunately, that isn’t enough to overcome the car’s numerous weaknesses.

At more than £18,000 for the standard ForTwo Brabus cabrio and in excess of £21,000 for the xclusive version, the faster, sweeter handling and more practical Mini Cooper Mini Convertible makes an awful lot more sense. Even better, the 1.5-litre MX-5 is more than £100 cheaper than the Smart.

Who on earth would buy one??

Also, the new model can't get away with sideways parking into small spaces - I've seen quite a few with parking tickets on the windscreen, so its USP is no longer valid! It is now an utterly pointless car and the latest front looks appalling, perhaps it should be named Thicky?

I'm a huge smart fan, had

I'm a huge smart fan, had many of them (although I think SmartTony has had more!), but this is stupidly expensive! If you must buy a fortwo cabriolet, buy the standard turbo version and put a couple of choice options, for a lot less than this
smarttony 18 October 2016

Even the exhaust tips aren't real - they're just for show, the real exits are on the underside of the exhaust!

It's just too expensive and doesn't even look very special, previous BRABUS versions had more exterior changes - looking at this thing side on it just looks like a side skirt has been ripped off.