Skoda may be an automotive synonym for utility but I guarantee this won’t be at the forefront of your mind when you clap eyes on the the new Octavia.

Still available in both hatchback and estate form, nothing aside from the introduction of hybrid powertrains has changed radically since the third-generation car, and yet the sharper creases, sharper lighting and surprisingly sharp silhouette deliver a car more striking in the metal than many of the Octavia's recently refreshed including the Volkswagen Golf, Ford Focus and Seat Leon.

Naturally, the new Octavia is also less expensive than its rivals, and the upcoming entry-level 1.0-litre TSI should drop below £20,000. Models equipped with the ultra-smooth Volkswagen-built 148bhp 1.5-litre TSI tested here aren’t quite so exceptionally affordable, but do still undercut most rivals.

And they do it despite the inclusion of Skoda’s new 10.25in virtual cockpit display, five USB-C ports, cruise control, light and rain sensors, two-zone climate-control, smartphone wireless (wireless for Apple CarPlay) and rear parking sensors as standard.

There is then the not-so-small matter of space. The Octavia uses the same MQB platform as its Golf cousin, only with the gap between the axles widened by 67mm. Slimmer seats (with dedicated phone pockets) then free up even more legroom in the back and the sloping hatch results in 600 litres of boot space, compared to a paltry-looking 380 litres for the others. So despite its sharp new suit, clearly the Octavia remains very much The Pragmatists’ Choice in this class. 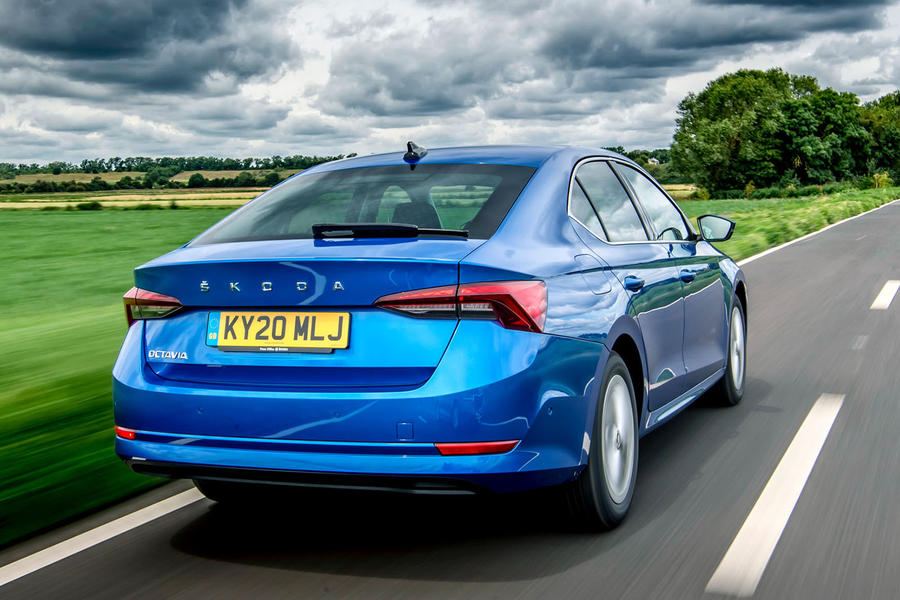 The price to pay is that this latest Skoda also remains far from being The Drivers’ Choice.

Glitzy scrollers on the steering wheel and slick touch-points elsewhere in the cabin – the door handles genuinely look as though they could have come out of a Type 57 Bugatti – demonstrate where Skoda has chosen to spend its money, and perceived quality is high.

More than almost any other, the brand knows its customer base, but this doesn’t change the fact that the steering and gearshift action are then wholly light and inert, almost to the point where it impinges the accuracy of your inputs. Turning into a bend can feel a little like that phantom extra step you weren’t expecting at the bottom of the stairs.

Like almost any modern hatch, the car can be hustled effectively and safely, and this petrol engine is willing, but the Golf is more assured on the move, the Leon marginally more involving and the Focus simply in another galaxy of satisfaction. At least the Octavia is noticeably refined at a cruise, where its well appointed, well isolated and airy cabin defies the low asking price, and where this 1.5-litre TSI returns more than 60mpg. TDI versions will do better still.

Aside from the insipidness of the driving experience, the sensibly sized Octavia is mostly vice-free and truly would, as the cliché goes, slip into anybody’s life with barely a ripple. But there are two irritations that need mentioning.

This is a now-familiar complaint with the last generation of VW Group wares, but the lack of physical switchgear for the infotainment irks. Simply, your eyes need to fully leave the road in order for your hands to make any meaningful adjustments.

The other complaint is minor, but on the standard passive suspension the Octavia can be brittle on poorer surfaces in a way that each of the other cars referenced in this review are not.

Skoda’s optional Dynamic Chassis Control dampers might improve matters, though strangely they’re not available with the 1.5-litre TSI or the 114bhp 2.0-litre TDI. Higher-ranking models fitted with multi-link rear suspension rather than this car’s torsion beam should also fare better. Go for both and it could well be a case of problem solved. 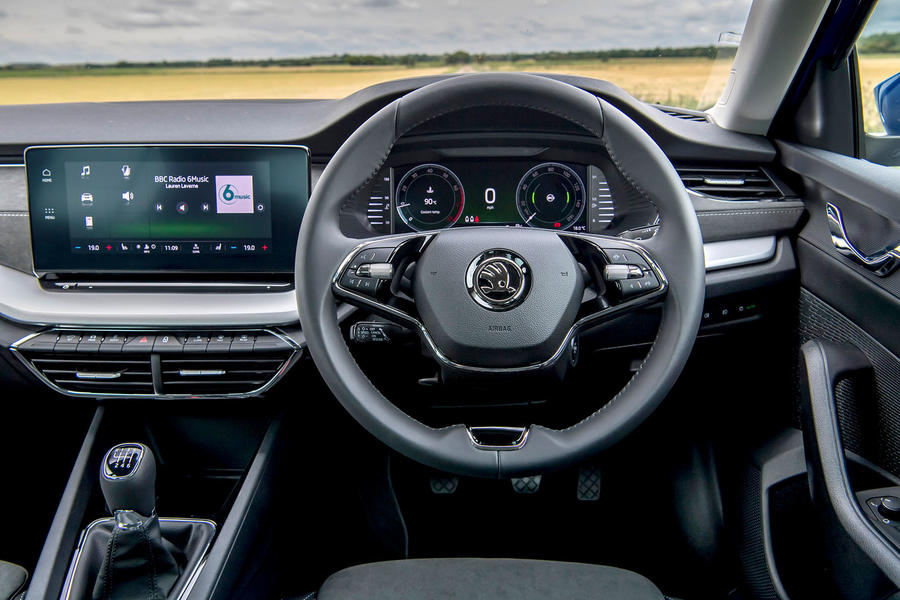 There are few surprises here. The Octavia is more spacious than before and, with mild- and plug-in hybrid models on the way, potentially also more frugal and versatile than ever, so long as you're happy to give up some boot capacity to make way for the battery pack. The optional seven-speed DSG gearbox may also suit the driving experience better than the manual tested here.

Equipment levels are also generous and, depending on your budget, it’s also possible to fit assisted-driving features, though the fundamental charm of the Octavia has always been founded on getting an awful lot of the car for not very much money. We'd stick to more basic trim levels, because the standard kit is generous.

The Octavia is an excellent tool-car, decently refined, and easier on the eye than ever. For most owners it will therefore feel like a four-and-a-half-star car. And yet, if you enjoy driving and want to feel some level of involvement, it’s more of a three-star car. Let's settle on something in between. 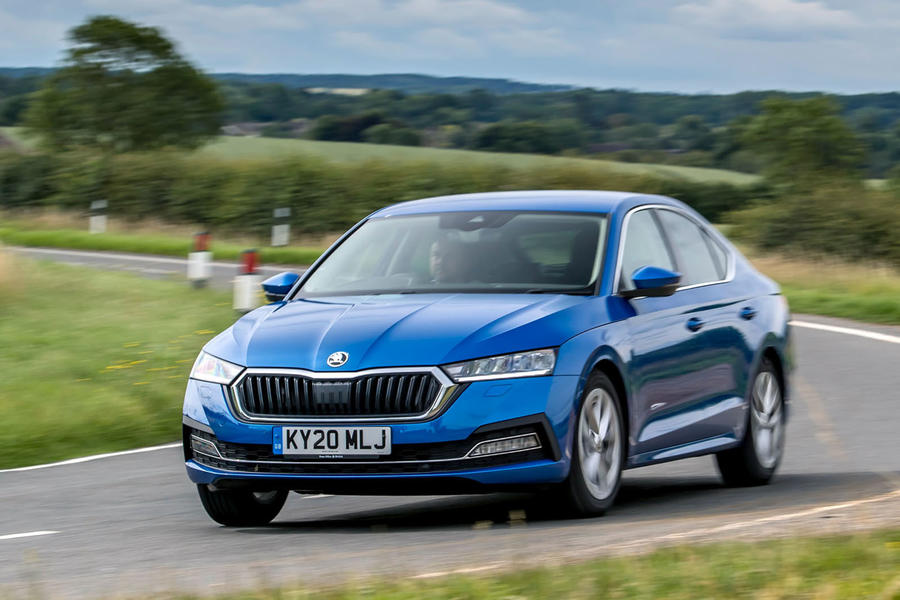 My current car's make/model/trim level has increased in price by 33% in the last 5 years. That's a lot more than inflation has increased over that time, and the model hasn't changed significantly enough during that time to justify that hike.

It's also why I'm still driving around in a 5 year old car rather than changing it every 3 years like I used to before prices got ridiculous, so the manufacturers are shooting themselves in the foot (car sales were declining long before Coronavirus arrived thanks to huge price hikes).

My current car's make/model/trim level has increased in price by 33% in the last 5 years. That's a lot more than inflation has increased over that time, and the model hasn't changed significantly enough during that time to justify that hike.

YES, why are modern cars overpriced??

totally agree gav , wages have not increased by 300% over the last 18 years so why are ‘new’ cars especially small and city cars in 2020 cars obscenely priced ?

Depressing south korean cars like the kia picanto has gone from a 5995 car to ten grand for a base model today. Can anyone think of any new car model that has not increased in price by insane rates over the years?

Can anyone think of any new car model that has not increased in price by insane rates over the years?

I thought you must have got that wrong so I had to check, and it seems I owe you an apology.  30 grand is indeed the starting point for a 370Z.  Considering the sort of cars it is up against that really is terrific value for money (relative to everything else on sale, that is!). Good spot!

Current Golf (8) and Octavia (4) have a different wheelbase. That was one of the main advantages advertised by VW Group for the MQB platform. Thought Autocar would know that. A lot of people here spending a lot of time writing about a car they seem to dislike so much...

Say what you mean, aye!

Overall the Octavia is an excellent tool-car, so to speak, and easier on the eye than ever, so for most owners it will feel like probably a four-and-a-half-star car. And yet, if you actually enjoy driving, and want to feel involved, it’s more of a three-star car, so let’s settle on something in between.
So Kind Of Don't Aquire, then.
SKODA
jason_recliner 29 July 2020

Overall the Octavia is an excellent tool-car, so to speak, and easier on the eye than ever...