A sprinkle of fresh intrigue for the Skoda Karoq crossover hatchback – and it probably hasn’t come a moment too soon. Skoda’s Nissan Qashqai rival has been on UK roads for more than a year now, but if you’re not entirely sure that you’ve seen one in the raw, that may be because this car looks quite a lot like more than one of its current Volkswagen Group, MQB-platform model relations (and, rather unhelpfully, there are an increasing number of those). By contrast, the Karoq’s immediate predecessor, the Skoda Yeti, was so distinctive that you could recognise one at a range of a couple of hundred yards, at dusk, and through gathering fog.

Enter the Karoq Scout, then: a more rugged-looking variation on the Karoq’s established theme, that comes with four-wheel drive as standard and a few other offroady-specialised touches; but which, more importantly, also adds some rufty-tufty bumpers and a few other styling flourishes to better identify the car within the melee of overgrown family hatchbacks to which our roads have lately become host.

Mechanically at least, the Scout is little more than an interestingly equipped, mid-spec Karoq. It’s available with either of the car’s upper-level four-cylinder, 148bhp petrol or diesel engines, and with a choice of six-speed manual or seven-speed twin-clutch gearboxes.

Four-wheel drive as standard means that both versions get all-independent suspension, although there’s no greater ground clearance here and no heavy-duty shock absorbers. Nineteen-inch alloy wheels wrapped with Bridgestone Dueler SUV-intended tyres do come as standard, as does Skoda’s ‘rough road’ package (which gets you some protective panelling for the car’s engine, underbody and wheel arches – although it, too, can be had as an option on other Karoq derivatives).

You can augment the specification of your Scout if you choose to, meanwhile, with either ‘dynamic chassis control’ adaptive damping, variable-ratio ‘progressive’ steering, or both (although our test car had neither). 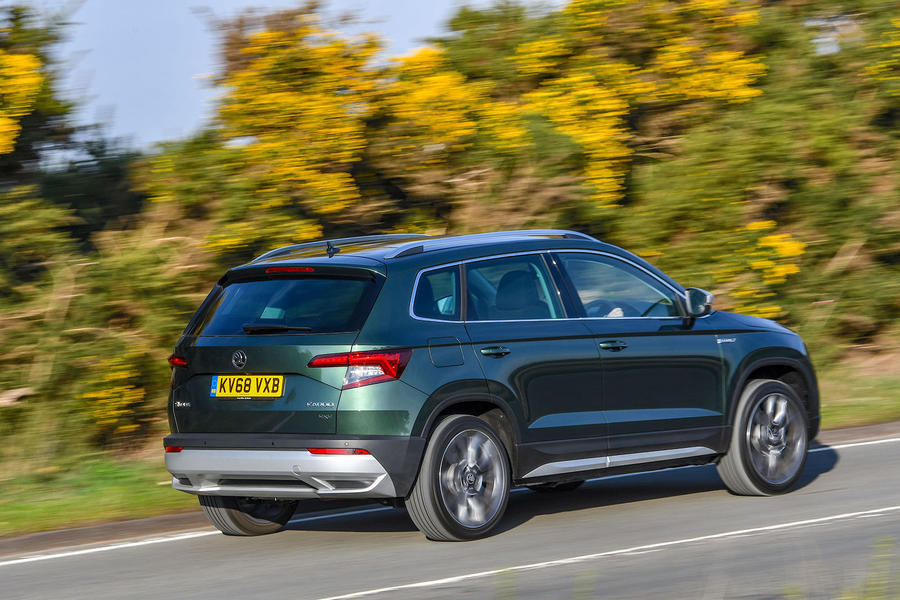 Surprisingly practical and functional; pretty comfortable and easy to use; and more than respectable to drive – although it’s not the most rugged, go-anywhere device for the money, nor is it particularly enticing on the road. That’s the short answer.

The Karoq Scout squeezes plenty of usable space into one of the crossover class’s smaller overall footprints. It gets Skoda’s ‘varioflex’ back seats as standard, which slide forward and backwards to trade boot space for passenger room, or can be removed entirely for maximum loading capacity.

Adults will find decent accommodation in the second row, with plenty of footspace under the front seats, reasonable leg room and good under-thigh seat support. There are air vents and a 12V power supply for those in the back seats, too, as well as usable picnic tables that fold out from the front seatbacks and are solid enough to support a laptop or tablet computer without depositing the same abruptly onto your groin when the car hits a bump. As far as second-row folding tray tables can be, they’re good ones.

In the boot, the Karoq Scout forgoes the option of a variable-height boot floor. It has got useful storage cubbies on both sides of the loading area, however, and very handy load-securing hooks on both sides also which slide fore and aft and can be used to keep shopping bags upright or to stop them from moving around. Take the back seats out entirely and you can accommodate up to 1810 litres of cargo in this car – more than you get in some SUVs that are considerably larger and more expensive – so it’d certainly make your monthly recycling centre visits more productive.

Just like the Karoq’s otherwise slightly dowdy and derivative exterior, the Karoq Scout’s cabin ambience is certainly the better for the addition of some extra decoration. Scout trim brings with it two-tone upholstery for the car’s comfortable and fairly widely adjustable front seats, and some slightly unconvincing though not unpleasant wood veneer for the door cards. You can pay extra for fully digital instruments and a 9.2in ‘Columbus’ touchscreen infotainment system if you want to, but our test car had neither and didn’t seem much the poorer for the omissions. The standard 8.0in infotainment set-up looks great and is easy to navigate, particularly so since it retains physical knobs for volume and navigation map scale, while the car’s analogue instruments are well-presented and readable. Perceived quality is mostly good, although there are some harder mouldings on the car’s lower transmission tunnel and door consoles that aren’t as pleasant on the eye or to touch as they might be.

Given that no mechanical modifications were made to the Karoq Scout’s suspension or running gear, it was always unlikely to rival a true off-roader in the mud-plugging stakes. That’s not to say it couldn’t tow a medium-sized caravan across a wet field, though, or make short work of a muddy rutted track or a snowy lane. These sorts of challenges represent the very toughest that life is likely to throw at a crossover SUV, after all – and the Karoq should handle them easily. With just under 180mm of ground clearance, it’s not a car to take over seriously challenging terrain; and, while it has suspension with enough travel to glide over an urban speed bump without obliging you to slow down much, it feels as if it’d run out of wheel travel pretty quickly over serious ruts and craters.

On the road, though, no mechanical modifications means that there are no ready-made excuses for this Karoq to be any less wieldy-handling, refined or easy to drive than any other crossover of its kind; and, by and large, it needs very few.

Without ever promising much in the way of driver satisfaction or threatening to set new dynamic standards for the crossover class, the Karoq Scout conducts itself just fine in everyday use. For outright grip level, handling accuracy and ‘goes where you point it’ directional obedience, the car is about average for the class – and so it feels pretty much as wieldy and agile as an average small family car.

A Seat Ateca, Volkswagen T-Roc or Toyota C-HR would feel keener and more poised through a corner, since the Karoq’s suspension makes for a slightly soft and overly permissive sense of body control that can become a touch problematic when the road surface becomes choppy. The Skoda also adopts a less settled motorway ride than some of its rivals, although ride comfort is fine on smoother roads and cabin isolation from both road and wind noise are both decent.

The car’s four-cylinder diesel engine can get disproportionately noisy at high revs and suffers with a shortage of throttle response below 1800rpm, but keep the rev-counter between 2000rpm and 4000rpm and performance is flexible and fairly stout. Once you’ve learned not to let engine revs drop too far, you could tow easily enough – although a slightly notchy gearshift wouldn’t sweeten the process much. Real-world motorway economy should vary from 40mpg to 50mpg depending on your cruising speed – which, again, is about average for a diesel crossover. 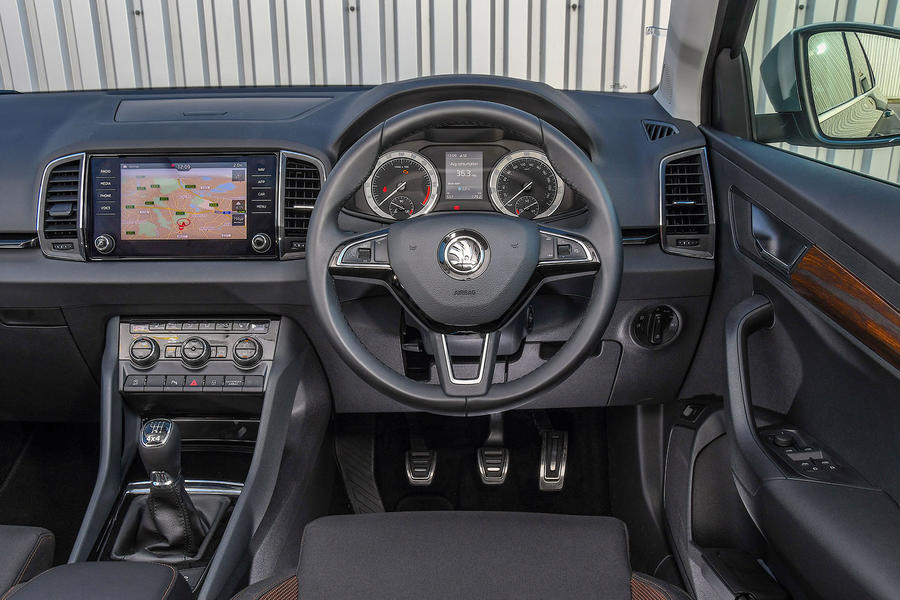 Even after its Country Life makeover, the Skoda Karoq isn’t a car with the charm of the model it replaces, and it’s much more likely to appeal as a functional and versatile compact family car ready for any occasion than because it does any one thing spectacularly well.

It’d make a dependable occasional off-roader but not a particularly rugged or capable one even by crossover class standards. Meanwhile, if you want the very best-looking, best-handling or most desirable car of its kind, you were never likely to consider it in the first place.

There is, without doubt, a sense of middle-of-the-road averageness and flavourlessness about this car that prevents it from standing out in an overwhelmingly large field of small SUVs. The Karoq’s impressive practicality and versatility can do little to compensate for that problem, and ultimately the Karoq Scout’s beefy bumpers and two-tone seats can provide limited respite from it either. 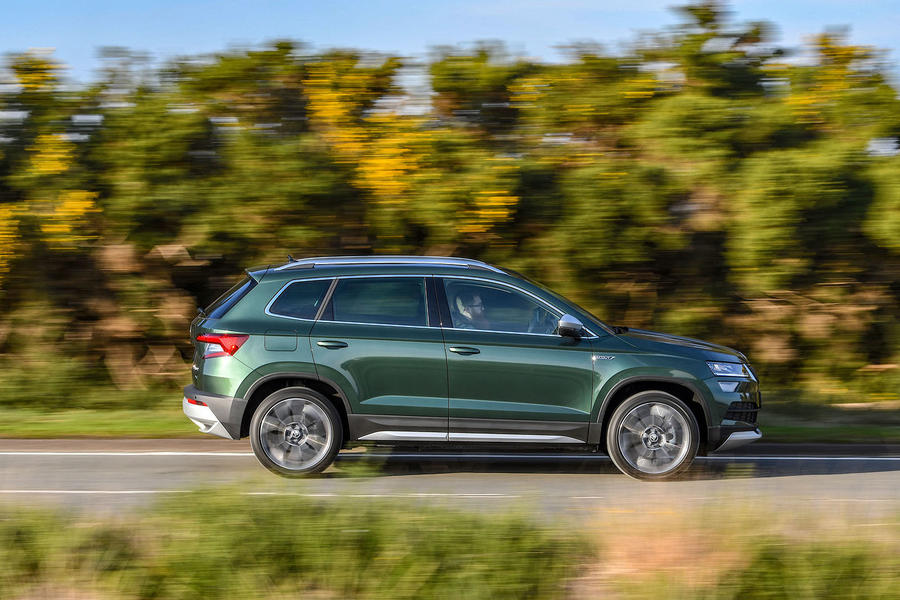 I don't think that Volkswagen are going to allow that anytime soon.

The reasons given for not buying one of these seem to be ones that would apply to most of its competitors though?