From £22,4108
The Yeti has morphed into the Karoq for its second generation, and this early drive reveals a solid, practical small SUV that could challenge the class best
Open gallery
Close

The new Skoda Yeti isn't actually a Skoda Yeti anymore. That's right, one of the last beacons of creativity in the naming of cars has gone out, replaced by a rough translation of 'car arrow' in the language of a tribe in Alaska, to give us the Skoda Karoq.

Skoda had a hit on its hands with the Yeti. It was an early arrival in the small SUV world, with enough quirkiness to mask its obvious compromises and shortcomings. It was likeable, a bit different, and sold well right to the end of its life.

Its replacement, the Karoq, is something altogether more conventional, not just because of its name. It's effectively Skoda's version of the Seat Ateca and upcoming Volkswagen T-Roc. It's grown slightly in size over the Yeti in all departments, chiefly for the benefit of interior passengers, and in true Skoda style ends up with a boot much bigger than that of its chief rival, the Nissan Qashqai. 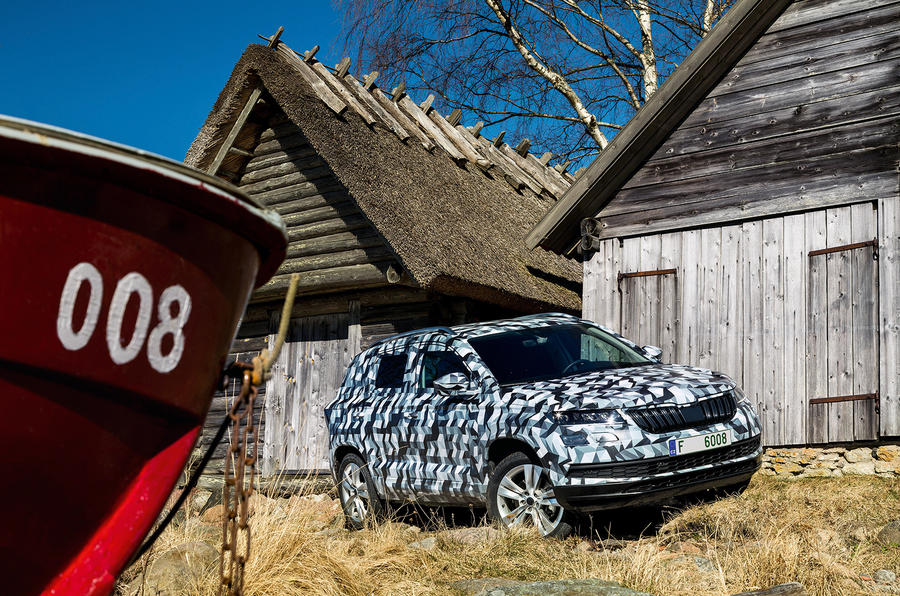 You can play a game of Volkswagen Group MQB platform bingo with a lot of the Karoq's spec. There are five engines in the range, all direct-injection turbocharged units with EU6 emissions compliance, ranging from a three-cylinder 1.0-litre TSI unit with 113bhp to a range-topping 2.0-litre TDI with 187bhp. Four of the five engines offered on the Karoq were not offered on the Yeti. Front-wheel drive and a six-speed manual gearbox are standard, with four-wheel drive and a seven-speed dual-clutch automatic gearbox offered with certain engines.

Hidden under the camouflage of the development car we've been granted an early drive in is a look inspired by the larger seven-seat Kodiaq in Skoda's growing range of SUVs. We'll get to see the finished package on 18 May.

It should be of no surprise that the Karoq provides a driving experience familiar from that of other MQB-based SUVs, albeit tuned to a more Skoda-friendly flavour. That means the suspension has a softer set-up than the Ateca, which manifests itself in offering a better ride than its firmer Spanish sibling at higher speeds.

It handles large compressions and long-wave undulations well, but soft does not always mean comfortable. The low-speed ride is inconsistent, with the car fidgeting on all but the smoothest of surfaces. Our test car was fitted with the standard passive dampers, which do a poor job of isolating occupants from scarred road surfaces. The fact that Skoda has sped up development of its optional Dynamic Chassis Control adaptive dampers to fix this issue is telling, and they should be available at the launch of UK cars, if not soon after.

The Karoq's softer set-up also means more body roll through corners. As for the steering, it's very light when left in the normal driving mode. Switching over to the Sport mode adds more resistance but it still feels over-assisted and remote. There is also noticeable suspension noise, which fast seems to be becoming a Skoda trait. 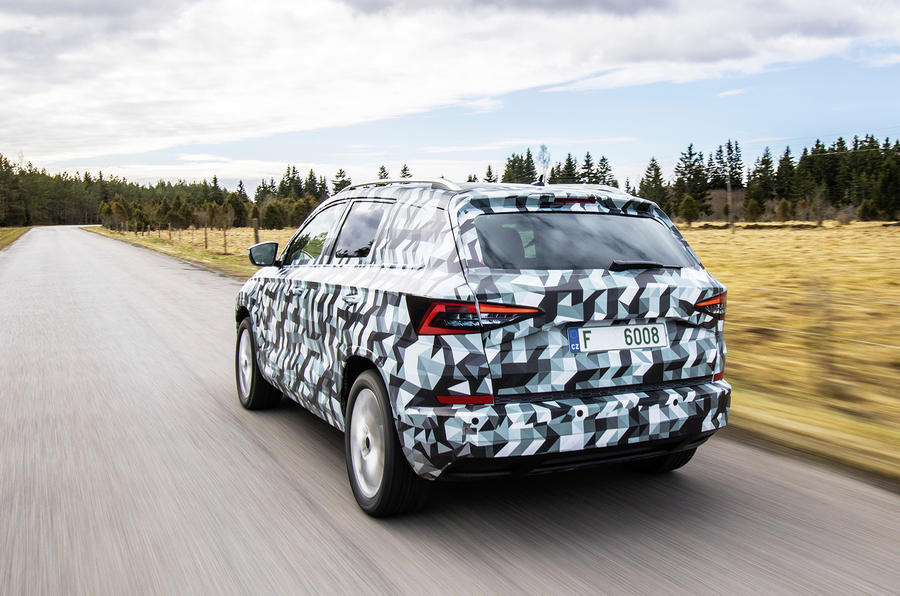 Our test car was equipped with the lower-powered 148bhp version of the familiar 2.0 TDI engine. It's wanting for little to suggest you'll need to trade up to the 187bhp range-topper. It's brisk in a straight line once you're over the initial hesitation of the optional DSG gearbox before it shuffles nicely through the gears. It's a very tractable engine, and impressively refined.

Some four-wheel-drive versions of the Yeti can also claim a mite of off-road ability. Selecting the off-road mode in the Karoq activates hill descent control and keeps the car in a low gear. It feels more capable off road than the Peugeot 3008 with a similar set-up, but it would be wrong to call the Karoq an off-roader with its limited ground clearance and wheel articulation. Conquering a muddy field it can do, though, and that'll be fine with its owners.

They'll also be very pleased with the Karoq's interior, which is one of its real highlights. The design has greater differentiation to those of its MQB siblings. The star is the addition of the digital instrument display known elsewhere as the Volkswagen Active Info Display and Audi Virtual Cockpit. It has made it into the Karoq as the imaginatively named Digital Instrument Panel, and shows key driving, sat-nav and infotainment information in the instrument binnacle. 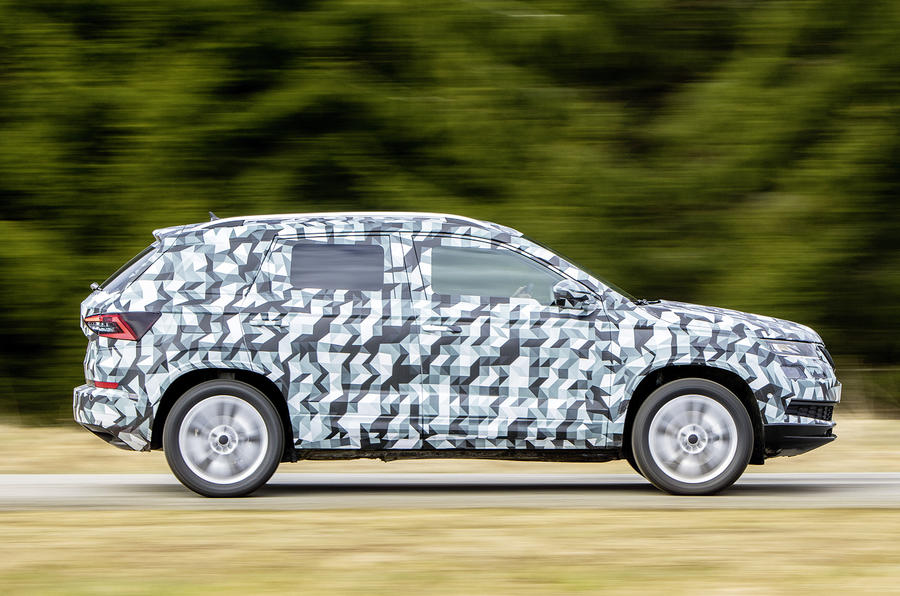 Elsewhere inside, the build quality is impressive, and the overall design and layout is inspired by the Kodiaq. This is a good thing.

Being a Skoda, rear space and boot space have been made a priority; the Karoq has lashings of both, with the storage space under the front seats a particularly nice touch. The removable Varioflex rear seats of the Yeti are carried over to the Karoq, and boot space is class leading, at 488 litres or maximum of 1810 litres in full van mode.

The Karoq is likely to prove a winner off the back of the fact it does the things that all other Skodas do well to make them a success: by being better value than its rivals and offering more space. The Karoq already ticks the spaciousness box, and the indications are from insiders that the Karoq will actually undercut the Yeti, coming in at a very competitive £17,770.

It's a shame some of the Yeti's originality has been lost - and not just in the name - but, firm ride aside, buyers are unlikely to find anything to be put off by. The MQB train rolls on.

With the Yeti gone, this is just badge engineering in the BMC style. Ateca, Tiguan, Koroq - Austin, Riley or MG 1100? Once they start down that road they will loose customer appeal.
Northern Giraffe 2 May 2017

The captur indeed is in the class below, but the Kadjar can be found for as little as £15k. Better than this ugly thing.
PeterMs 29 April 2017

Ok, I'll take on the VAG haters and assorted trolls. Thanks for the review. I am one reader who appreciates it and read it with interest. As the co-owner of a Yeti and a Fabia, I've been waiting on this. The important thing for me is that 1. It is a twin of the Ateca rather than the Tiguan, which is virtually in another category because of additional length and 2. It retains the Varioflex seats which I have found surprisingly handy. Skoda makes practical cars, usually enjoyable and economical to drive. The comments about soft suspension are a worry. Our Skoda's have hard suspension, which I prefer.
View all comments (14)