This is our first chance to sample the Skoda Karoq on British roads - albeit as a Czech-registered left-hooker. The Karoq is the smaller sister to the seven-seat Skoda Kodiaq, sitting on the same familiar MQB platform that underpins (almost) all of VW Group’s mid-sized products. As such, it is also a first cousin to the Seat Ateca and VW T-Roc, with more staid design than the latter but also much more practicality.

While the Karoq lacks the visual excitement of the T-Roc, it can offer both generous standard equipment and strong value for money. Our test car was in European ‘Style’ trim, but we’re told that this is almost identical to the top-spec British ‘Edition’. That means almost a full bingo card of kit as standard: leather trim, panoramic sunroof, power-operated tailgate, full LED lights and a power-operated driver’s seat. It also means Skoda’s full-spec Columbus infotainment system with a 9.0in touchscreen. The only difference between this car and a UK Edition is the wheels, our test car riding on 18s when the British car will have 19s as standard.

The 1.5 TSI petrol engine sits in the middle of the range and is expected to be the biggest seller in the UK. As tends to be the case with modern crossovers, it’s front-wheel drive (only the top-spec diesel Karoq will come with AWD), with our test car also getting the optional seven-speed DSG dual-clutch automatic gearbox. As such, it’s set to cost a very competitive £28,410. 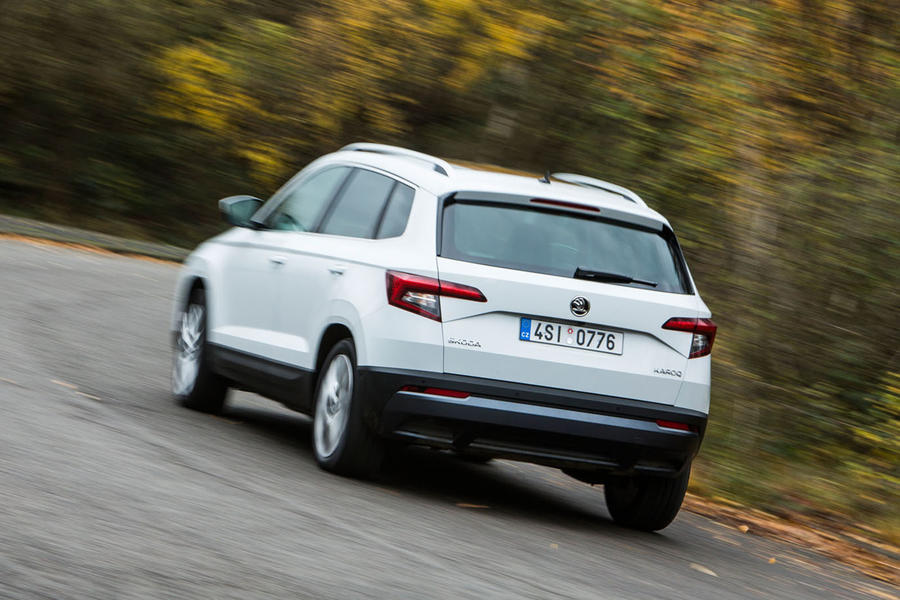 Satisfyingly sensible, the Karoq is unlikely to spike pulse rates, but it does everything will a relaxed competence that marks it out as an all-round talent. While it’s short on flash, the exterior design incorporates Skoda’s origami design language to a pleasing degree; our only area of criticism being the fake grille texture plastics at both ends – something the T-Roc also suffers from.

Cabin materials have been chosen for durability rather than premium feel, although some black gloss trim lifts the ambience, with intelligent design and good ergonomics. The display of the big infotainment touchscreen is rendered with an impressive crispness and responds quickly and intuitively to instruction.

Space is impressive, both up front and with adult-viable room in the back. More important for family use is the relatively low window line compared with more fashionable coupé crossovers, meaning kids will be able to see out. Top-spec trim means the adaptable Varioflex seating comes as standard – it’s a cost option on lesser Karoqs – and it’s well worth having.

While dynamics are likely to be lower down the priority list of potential buyers, the Karoq drives with a tidy competence and occasional flashes of enthusiasm. The 1.5-litre engine is tuned for torque and is happiest when asked to deliver relaxed progress, but it will rev to the 6000rpm redline when asked to do so and gives the Karoq a reasonable turn of speed when it does. There’s more than enough low-down urge to chirp the front tyres when pulling out of junctions, something the relatively abrupt step-off of the DSG gearbox seems to encourage, but once the car is rolling, shifts are delivered cleanly in both automatic and manual modes.

Cruising refinement is good, only slight wind noise from the tops of the doors disturbing the calm of the cabin at a rapid motorway pace. Ride quality impresses as well, albeit with the proviso of the car wearing the smaller, 18in wheels.

Skoda’s chassis settings tend to work well in the UK, and the Karoq has a well-damped compliance over choppy British tarmac. The softish spring rates make for body roll under harder cornering loads, but the steering is accurate and the Skoda is easy to place and holds on gamely up to the modest limits of its front tyres. It’s not a performance car, but it’s not a dull one, either, and the laid-back chassis settings work far better than the overly firm tune often attempted by wannabe sporty crossovers. 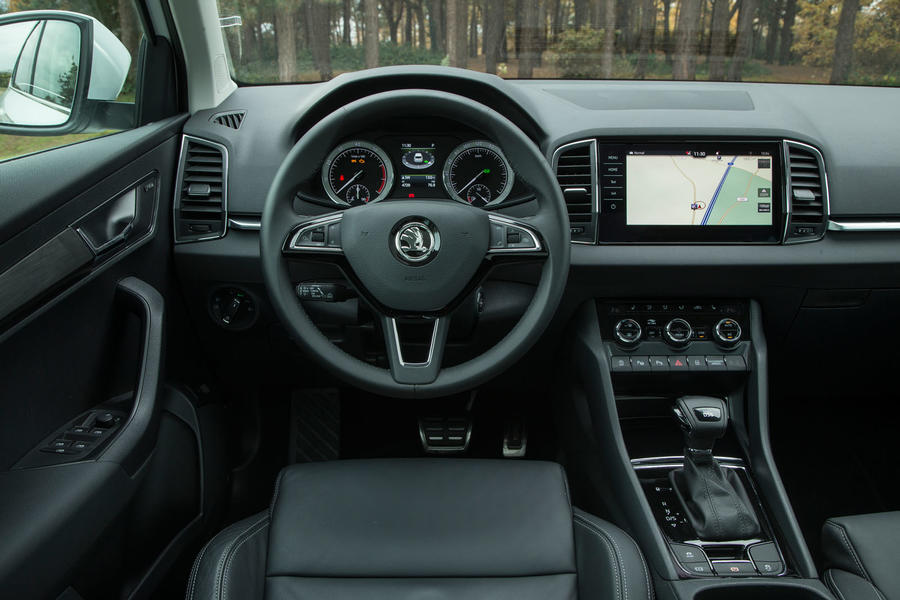 You'd probably be surprised if a Skoda didn’t offer strong value for money, but although most attention is likely to be won by the attractive lead-in pricing of the entry-level Karoq 1.0 TSI SE (£20,875, including respectable levels of equipment), the plusher versions offer a more compelling proposition compared with obvious rivals. While it’s possible to spend more on options – our car had radar cruise control (£330) and a £550 Canton speaker upgrade – the non-augmented 1.5 Edition feels generously equipped. For the money, you'll struggle to buy better in this ultra-competitive segment. 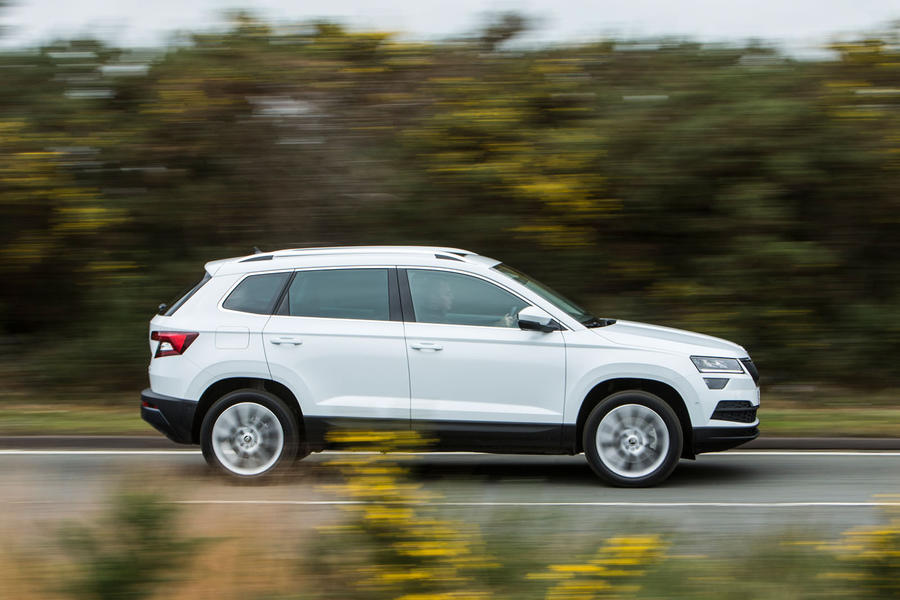 If this thing was a Ssangyong it would receive same styling reviews in line with what it deserves. The grille and the front and rear lights are hideous. Basically, the only items where they tried to be original and which differ from the Ateca (which is far from original itself). VAG does not know to be original. The T-roc is a good effort though. Another typical VAG product, completely bland but properly assembled and built and with good press. Unfortunately, it will sell a lot more than the Yeti did (at least in Portugal)...

If this thing was a Ssangyong it would receive same styling reviews in line with what it deserves. The grille and the front and rear lights are hideous. Basically, the only items where they tried to be original and which differ from the Ateca (which is far from original itself). VAG does not know to be original. The T-roc is a good effort though. Another typical VAG product, completely bland but properly assembled and built and with good press. Unfortunately, it will sell a lot more than the Yeti did (at least in Portugal)...

The benefits of a modern platform?

Granted, it's based on an old platform and has 4WD but it's still staggering that the Jaguar E-Pace, which competes in the same class as the Karoq, weighs around 500kg more (in D180 AWD guise) than the Skoda (and no doubt its VW Group stablemates based on the same platform). Unless the 1318kg quoted for the Skoda is incorrect?