Seat's new Ibiza, the fifth incarnation of the Spanish company's small-car line, is the starting point for the whole Volkswagen Group's next generation of 148bhp engine launched in the latest sub-Golf-sized hatchbacks. Outwardly, it builds on the crisp-edged design theme of the larger Leon and the recently-launched Ateca SUV, and underneath it shares a version of the Group's modular and versatile MQB platform, shortened for its new role and dubbed MQB-A0.

This means that while it's a tiny 2mm shorter than the previous Ibiza despite a much roomier cabin, it's also a massive 87mm wider to the point where it's treading on the toes of the size-class above. There's no three-door body style this time, and the former supermini has become a fully-formed family car.

That said, Seat is aiming the Ibiza at a young audience as it has done with previous generations. The company claims its customers are 10 years younger, on average, than those for most rival brands. So the Ibiza majors on connectivity, with FR and Xcellence models featuring DAB radio and a large 8in glass touchscreen to control Apple Car Play, Android Auto and Mirror Link. A powerful seven-speaker Beats audio system is available as an option across all trim levels.

Engines at launch are petrol-fuelled, three-cylinder, 1.0-litre units with 74bhp, or turbocharged TSI versions of these with 94 or 113bhp. The new 1.5-litre, four-cylinder, Volkswagen Golf – a lower-friction, better-breathing, slightly overbored development of the Group's 1.4-litre unit – joins the range later, as do 1.6-litre turbodiesels with 79, 94 or 113bhp. There'll also be an 89bhp TSI fuelled by compressed natural gas.

Trim levels start at Reference (S in the UK) and progress through Style (SE in the UK) to the twin peaks of the range, FR with sporting overtones and Xcellence with a chrome-accented tilt towards a luxury feel; there's no word on a Cupra just yet. Our first drive majors on the 113bhp TSI engine. 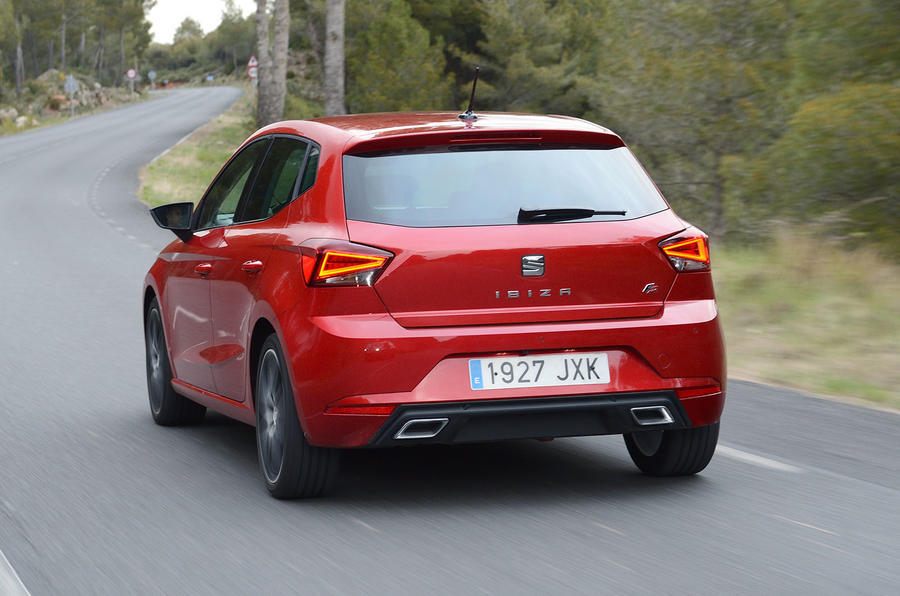 Triangular. That's one description. Seat's design department loves triangles, not least because, says design chief Alejandro Mesonero, they suggest motion and direction. So we see triangles in the full-LED headlights, the taillights, the door mirrors; and inside we find similar angularity around the door handles, the speaker grilles and the door-pocket openings.

The Ibiza is undeniably a good-looking car, with clean lines, crisp edges and a sense of tension. It's beautifully put together, with panels and components fitting tightly, and the dashboard with its bold band of black or body colour (depending on model), which incorporates the screen, strikes a great balance between visual simplicity and easy access to functions without having to wade through layers of menus. The instruments are clear and bold, too, with an Audi-like configurable-screen version to be offered later.

What could almost be a premium-looking cabin is kept in its place in the Volkswagen Group hierarchy by the hard surfaces where you might hope for soft ones: the dashboard top, the top sections of the door trims. But the textures are matt and they look expensive to produce, so a hint of premiumness does pervade. 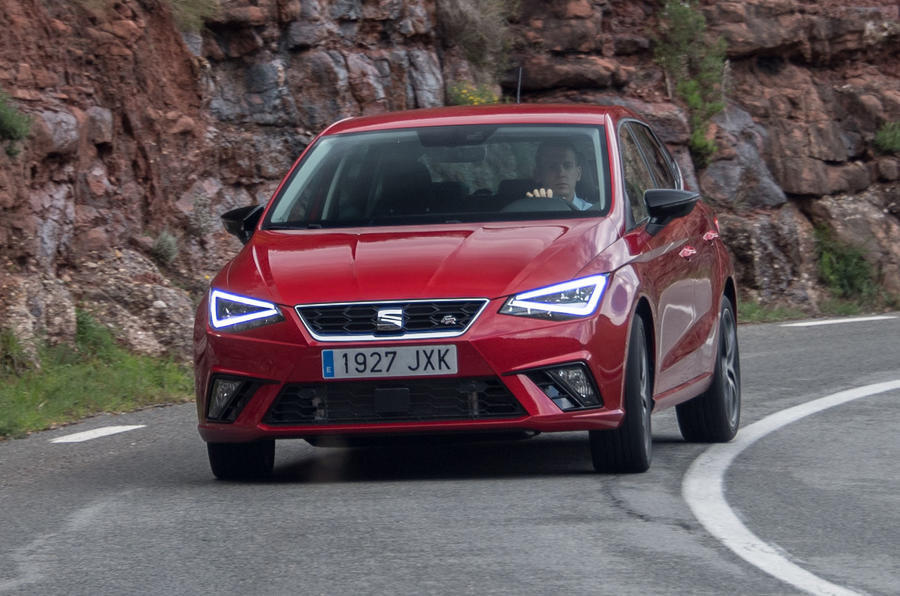 As expected from the dimensional increases which include a wheelbase stretched by 95mm to 2654mm, there's plenty of room in the Ibiza. Three adults can fit in the back without suffering too much, enjoying the 35mm of extra legroom, while the boot can swallow 355 litres of luggage, 63 litres more than before.

With the MQB architecture comes a significant rise, around 30 per cent, in torsional stiffness. Certainly the Ibiza feels rigid, rattle-free and all-of-a-piece on the road, and it combines a supple, quiet ride with precise pointability and a flat cornering stance. It grips well, the front wheels resisting understeer even in a succession of speedily-taken mountain bends, and the body's movements are always calm with just the right amount of damping. That applies to both the standard suspension and the slightly firmer settings found in the FR, which also firms its dampers a little more – so little that it's not at all obvious – when switched to Sport mode, which also adds resistance to the precise steering and eagerness to the accelerator response.

The three-cylinder engine's 148lb ft of torque enables it to pull a long-legged sixth gear, with an indicated 75mph showing just 2500rpm, but long motorway gradients defeat it and call for a downshift with the particularly slick gearchange. There's quite a lot of response lag from low revs, too, but once the turbocharger is up to speed the engine is an eager, smooth and tuneful thing. All told, the new Ibiza is an engaging car to drive – and a brief encounter with the 1.5-litre version, for which no performance figures are yet available, showed it to feel very keen indeed with a remarkable lack of turbo lag. 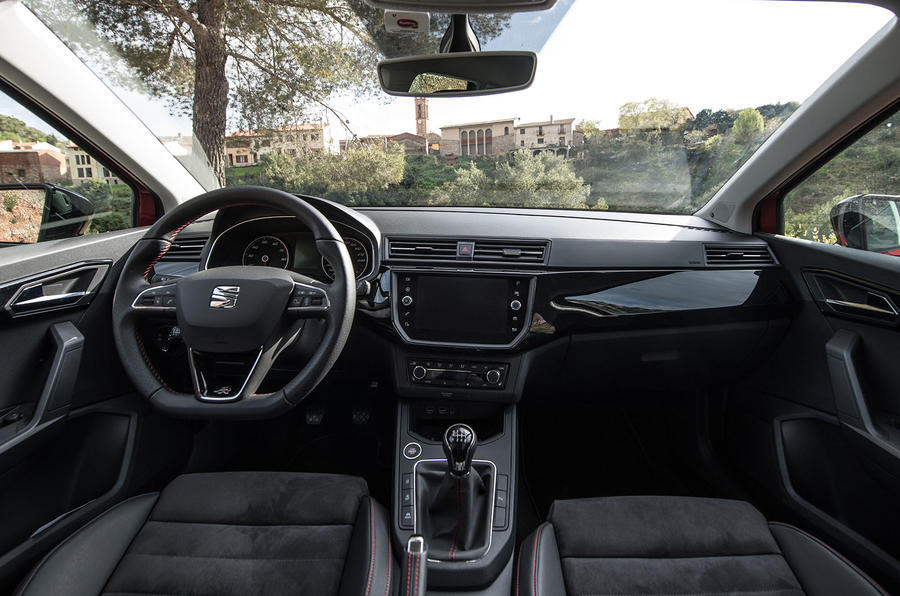 The Ibiza is quite a characterful compact hatchback, it's well equipped with the expected latest technology (Traffic Jam Assist, Front Assist and Adaptive Cruise Control are all available), and as ever with Seat, it offers Volkswagen Group quality at a lower price. Of the UK prices revealed so far, the lowest is £13,130 for the entry-level, 74bhp, 1.0 MPI rising to £16,630 for the 1.0 TSI 115 in FR guise. The highest UK price is £17,310 for the Xcellence 1.0 TSI with 94bhp. However, it can't be had with a 113bhp engine, but the FR can at £16,630. Orders will open in May for July delivery.

There's no estate-car version this time, its place taken by the Ibiza-derived Arona compact SUV due later this year. But if you favour a regular small hatchback, the new Ibiza is a very good one that's fun to drive, nicely finished and has all the toys. It's an unusually roomy one, too.

Everyone is doing that kick in the rear pillar...

I wonder if its something to do with crash performance? It looks like a more rigid design with metal reinforcing the tailgate aperture nearly all the way up. Also metal weighs less than glass...

Still - its a shame. A lot of hatchbacks look very samey now...

My Wife has just bought her ex demo 1.2Tsi Tech FR,and I have to say,compared to her previous Ibiza the FR isn't what I'd thought!,I think the suspensions a bit softer,the engine is a bit gutless between 2nd and 3rd low down,the steering lacks a feel and it's a bit light too,OK,so this is the mk6,but,build wise it is much better than the mk5 and it's quieter also,and the tech is good to
catnip 29 March 2017

It was reported that Seat

It was reported that Seat said the next Ibiza (this one) would take inspiration from the chunky original, and wouldn't be a Leon clone. I was looking forward to that....
View all comments (13)