From £16,5507
Megane hatch plays catch-up and gets the same plug-in option as the estate, with mixed results
Open gallery
Close

For anyone with a sense of deja vu reading this, do not adjust your sets. Yes, we have driven a latest-gen Renault Megane plug-in hybrid before, but that was the estate, back in September 2020. This time around it’s the hatch - quite why there has been such a delay between the two isn’t clear. Even Renault personnel are unsure as to the reasons why.

But let’s not worry about that - the car is here and is a boost for the ever-expanding numbers of plug-in hybrids. Chief rivals include the Seat Leon and VW Golf. This is bread and butter electrification territory - if ever the vast majority of the car owning public are going to be convinced to shift to full EV ownership, they’ll probably end up making the transition via something like a Megane PHEV. The C-segment still represents 40% of Europe’s car market, after all.

In this particular case, the Megane has a rear-mounted 10.46kWh battery powering a 49kW front-mounted synchronous motor. All that is mated to a naturally-aspirated 1.6-litre petrol, producing 89bhp, to give an overall combined figure of 158bhp. 0-62mph is completed in 9.4 seconds, while the eco figures run to 28g/km (equating to 11% BIK rate) and 30 miles of electric-only running.

The latter is good but not great. Kia’s Ceed will manage 35 miles between plug-ins. It’s only a small difference but one that does add up, if our experiences in living with a 35-miler Kia Sorento PHEV are anything to go by. As ever, ignore the Megane’s claimed mpg figure - we saw over 80mpg on a mixed route, which is impressive going, and shows how well modern PHEVs manage their battery/petrol usage. By using the B mode, to aid regenerative braking, we even managed to put some charge back into the battery, a rare occurrence in PHEVs. Charging the battery via a plug can be done in a minimum of three hours.

Elsewhere, as you’d expect, it’s very much business as usual on the Megane. The Renault corporate face is becoming a familiar one because it’s so similar across all the models, but that’s not a criticism. To my eyes, the C-shaped headlights help it stand out from the crowd.

Inside, the RS Line that we tested is dominated by the fully integrated, 9.3-inch portrait touchscreen (lesser models get a seven-incher). It’s an easy-ish thing to operate, even if it does without somewhere to rest your hand, while there are physical buttons for the climate control. All RS Line Meganes get the heavily bolstered seats and they feel as out-of-kilter here as they do on the regular petrol versions. Grippy, but just a bit too figure-hugging for an eco-focused hatch. 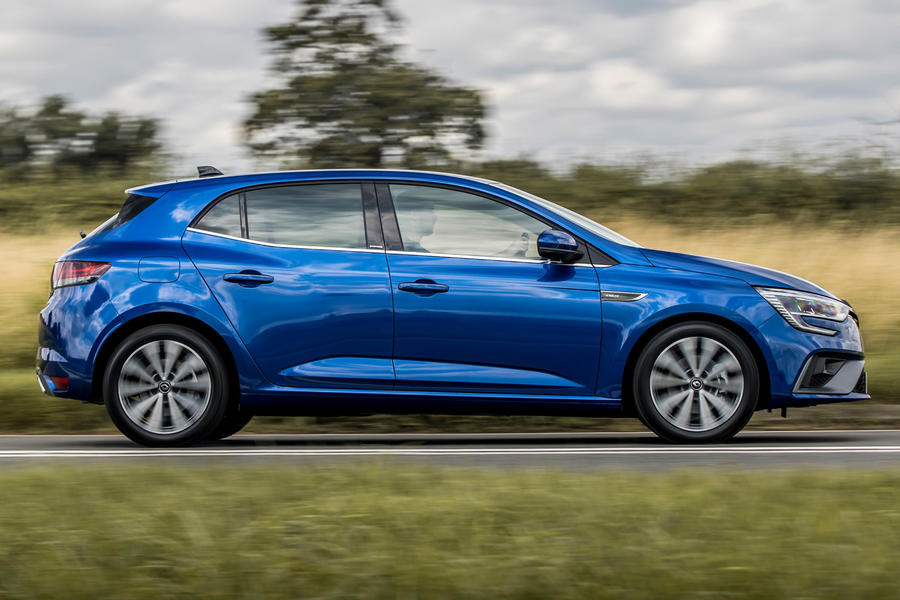 Given the mental map the front seats portray, it’s weird when you thumb the starter button and all you’re greeted by is the silence of the electric motor. This has a healthy 151lb ft of torque so the Megane is brisk out of junctions, even scrabbling occasionally for front-end traction. It’s also not slow during in-gear acceleration, pulling with plenty of punch.

But there’s a strange flat-spot in the power delivery halfway through the rev range. The Megane pulls healthily but then pauses, almost as if the engine and transmission are putting the kettle on and deciding whether they really do want to carry on accelerating. Once they’ve had a natter over the fence and put the world to rights, everything carries on as normal and you’re away again. But it’s an odd moment in an era where we’re getting increasingly used to seamless power delivery, thanks to modern turbos (albeit not here) and electric assistance.

The steering and brakes are numb but acceptable given where this car is aiming. The ride is better, with an ability to round off sharp edges and take the worst out of the Tarmac. Only cross-axle undulations unduly affect it, where the Megane starts to lollop and feel more unsettled. 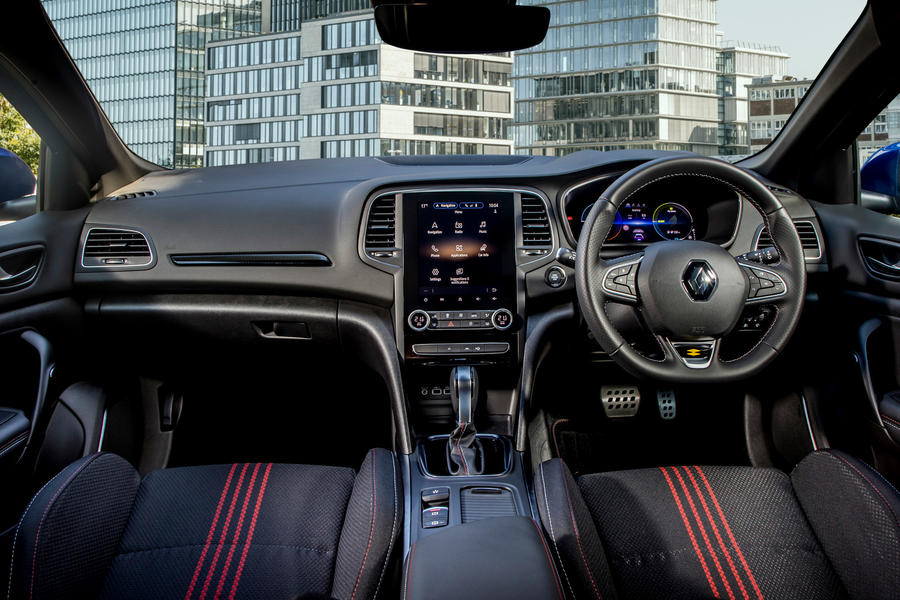 None of these criticisms are enough to condemn the Megane, but they do take the shine off what is in theory a decent offering. It’s competitively priced and is a good-looking thing, with enough on-board tech to make long journeys a painless experience.

Is that enough in such a competitive market? We’d argue not quite. 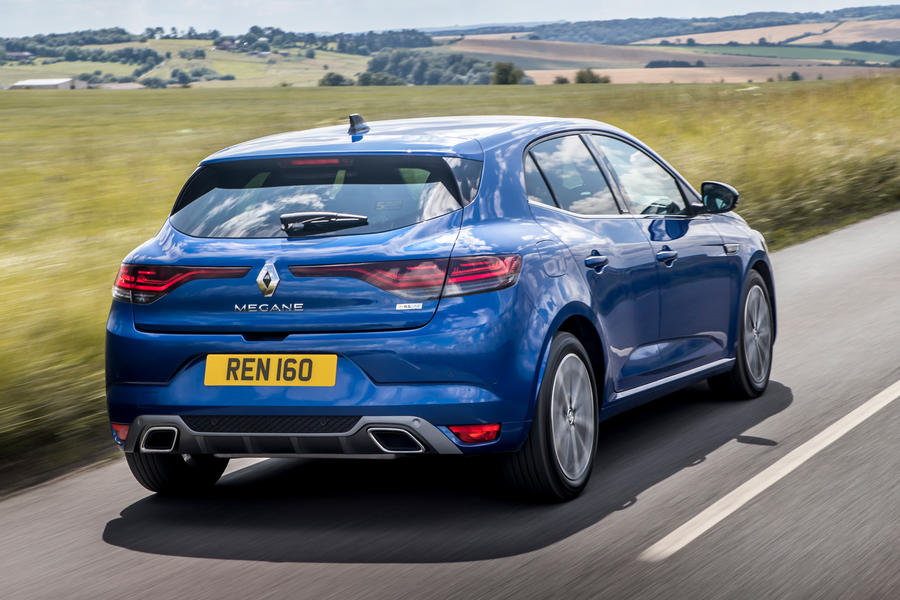 @v8 it's a phev and an electric zoe is cheaper, oh and phev's are not being banned in 2030. Better pick up the mike and stop ranting.

All electric cars are over-priced junk! It's stupid & un-sustainable legislation which is driving this idiotic government drive towards expensive electric vehicle ownership for the UK public, in order to avoid EU derived emissions fines - I thought we left the EU in 2020, so why are they still dictating what our emissions levels should be?! Do you know how much CO2 places like China or USA emit each day?! Electric cars are mostly impractical unless you just bumble to the shops and back each day - on longer journeys they are useless, it's quicker to go by public transport! We have just driven from Midlands down to Devon then onto South Dorset & back on 3/4 of a 50L tank of Petrol in a Toyota RAV4 hybrid, averaging 50-55mpg along the way - a 450+ mile journey! Under the current legislation these Petrol hybrid powered vehicles will be outlawed by 2030 in favour of all electric only vehicles - WHY?! It's just bo**ocks - these Petrol engined hybrid vehicles are the future, as they give better than diesel car economy with lower emissions & won't drain the national grid of all the power like electric vehicles will & then break down all over the place when they run out of charge - which is enevitable. Wake up & smell the coffee you decision making muppets! Drop the mike!

Cé hé sin 18 August 2021
The days when the average Autocar writer had much technical knowledge are sadly long gone, but the reason for the drop off in power as you accelerate is I think due to the unusual gearbox which allows the car to start in battery mode, switch to electric drive with the engine providing the electrons and then go to mechanical drive which requires power from the engine to be cut while revs are matched to enable a gear to engage without using a clutch.
View all comments (7)