This is the latest version of the Renault Mégane RS Trophy, a car whose continued existence we should celebrate however it’s been achieved in a European market that's increasingly hostile to so many performance cars.

Once so famously the cradle of the hot hatchback, the French car market has become one that, due to tightening emissions taxation, several hot hatch-centred performance brands are now avoiding entirely. You can no longer buy the Hyundai i30 N in France, and while you can still buy the Audi RS3, you will pay the equivalent of £23,000 in ‘malus’ emissions tax just to get it out of the showroom. Fancy a Ford Mustang V8? That will be £26,500, monsieur. Insert your own insultingly generic Gallic term of exclamation here.

For Renaultsport, whose biggest market is now its domestic one, the upping of the first-year tax burden on its Mégane RS to as much as the equivalent of £8000 will certainly be challenging. But for now at least, it's pressing on as best it can.

That means, although it may seem drastic to us Brits, they’ve deleted the manual version of the car for the latest model year. While the dual-clutch automatic may only be a handful of grams more CO2-efficient, in France that’s a difference that might effectively save people thousands.

The updated hot Mégane also gets new headlight and tail-light designs, a new infotainment system and a new instrument display, but no changes have been made to its mechanicals, save for the aforementioned gearbox deletion, and for one other: both standard RS and RS Trophy models now use the higher-powered 296bhp version of Renault’s 1.8-litre engine with its ball-bearing-born turbocharger.

One less reason to spend big on the Trophy version, then? Well, perhaps, but there are still others. After a simplification of the range, you now have to buy a Trophy to get the firmed-up Cup suspension; but if you do, you also get an active sports exhaust, 19in wheels, a Torsen slippy diff and a front brake upgrade, none of which are available on the softer-sprung RS 300. 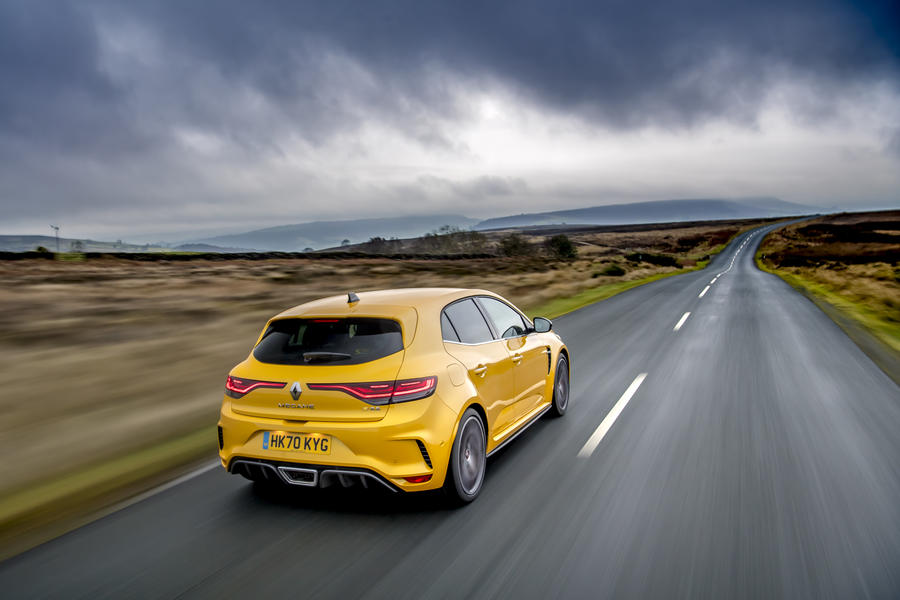 Renault’s material updates take a keen eye to spot, but among the most prominent are the new 9.3in touchscreen infotainment system (which has notably sharper graphics and a better laid-out home page and responds more quickly) and some more appealing heater controls. They do lift the ambient perceived quality levels a little, but there are still plenty of cheaper fixings and harder, lower-grade mouldings used in obvious places, while useful storage space around the cabin remains in slightly mean supply. Nobody ever asked for a half-sized glovebox or cupholders slightly too small and shallow to actually hold a decent-sized cup, did they? Sadly, we still get 'em.

The car’s driving position remains flawed, seating this slightly taller-than-average tester either too close to the pedals or too far from the other primary controls for optimum comfort. Apologies that these are all criticisms of this car that you may have read previously, but since Renault has failed to address so many of them, they seem worth repeating.

And we’re not finished with them yet, because the automatic car’s ergonomic failings continue to extend to high and unintuitively placed ‘manual’ shift paddles for the six-speed gearbox, and now that it’s EDC or nothing, that seems to annoy all the more. You shouldn’t have to move your hands from a-quarter-to-three on the wheel to reach a shift paddle, and on a car whose super-direct rack seems purpose-built to encourage such a fixed grip on the rim, you really shouldn’t.

The good news? Well, Renault’s optional bucket seats are comfortable and clamp your backside right where it needs to be. Four-seat passenger space is decent, provided that longer-legged drivers are prepared to bear the brunt of the car’s oddly shallow front footwells.

To drive, the Mégane RS Trophy’s highly strung character hasn’t changed, although I’m not sure that sampling it with a dual-clutch automatic gearbox improves the car overall. We should add at this point that we tested the car in chilly, wet conditions that, it would quickly become obvious to any owner, aren't its natural home. On a warmer test day, the tenor of all this might have been somewhat different. Still, we can only report as we find.

The boosty engine, firm ride, fast-paced four-wheel steering system and Torsen LSD can combine to make this car a hyperactive drive on tougher cross-country roads. It’s always lively, but its handling is particularly sensitive to bump, camber and disruption by tractive forces. On a wet road, the car swings from feeling really involving to quite suddenly become a bit wild and unruly and then swings back again as you probe away at its grip levels. Amid the wet and the mud and the murk, it’s very definitely an ESC-on kind of drive.

The way that the car is configured and tuned would make a great deal more sense – and for a lot more fun on a dry track. In any conditions, the Mégane RS Trophy is a livewire and likable for it. But in less-than-perfect conditions, its chassis is just a bit too reactive and direct. You’re too busy second-guessing it to be able to place the car intuitively on the road.

The four-wheel steering system, meanwhile, is definitely ready to lead you up the garden path a little when it’s working in its more aggressive settings, giving you much more apparent lateral grip on turn in and at the apex of a corner than there is available front-drive traction thereafter. That in turn can lead to some pretty scrappy and untidy corner exits for those who aren’t careful with the car’s thrusty feeling accelerator. Ditches and kerbs: you have been warned.

With an old-fashioned clutch pedal and full control over shift timing, you could better manage the car’s slightly wayward driven front axle in wintery conditions, needless to say. Even so, the Mégane’s six-speed EDC gearbox does make a credible fist of selecting the right gear at the right time if you put it in Sport driving mode. That it can be slightly slow to respond to one-off, paddle-born requests for a lower gear in other modes is its main bugbear, but if you’re simply driving from A-to-B in ‘D’, it works just fine.

If you’ve got it dialled up in Race mode, meanwhile, it works just as well, albeit without the tactile engagement that a good stick shift would offer. The Mégane RS’s manual change was never that good, but most keen drivers would still take an average manual over an average dual-clutch auto, and for very obvious reasons. 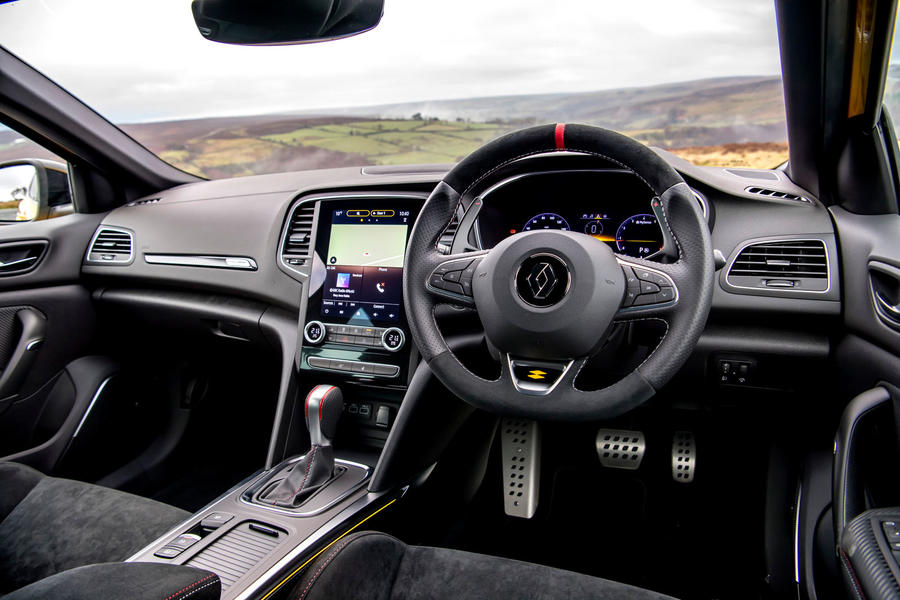 The removal of that manual gearbox option has done more harm to the driver appeal of this car than can be outweighed by Renault’s various model-year updates which, although welcome in some cases, fail to address plenty of the car’s shortcomings. As competent an operator as Renault’s EDC gearbox is, I think that fact would be apparent to any owner of an existing three-pedal Mégane RS Trophy who chopped in their car for the new one. To that owner, I would advise a cautionary ‘stick with what you’ve got’ approach.

If you’ve never owned a Renaultsport hot hatch, however - if the idea has ever held any appeal - and if any of what you’ve read above has made you realise that unless you act soon, you may never own a box-fresh one? Well, quite clearly, the opposite of caution may be necessary. Unless it adopts plug-in hybrid technology for its road cars, as Peugeot Sport Engineering is doing, you wouldn’t bet on Renaultsport having too long left, which isn’t a particularly cheery prospect for hot hatch devotees to contemplate.

And setting all sentimentality aside? Well, the Mégane RS Trophy is clearly anything but the most complete, versatile or usable hot hatch there is. The one in the car collection of my waking dreams might be put away for at least four months of the year, and it wouldn’t often transport passengers the rest of the time either, because they wouldn’t like it nearly as much as its driver.

When working though, in conditions and on a surface that suited it, I know it would be one of the most exciting front-driven packages made by any car company in the world. That much was true of the latest hot Mégane back in 2018 and remains so of the Mégane RS Trophy in 2021, two-pedal gearbox or otherwise; and one wet, chilly January drive on Midlands B-roads doesn’t change my certainty of it. 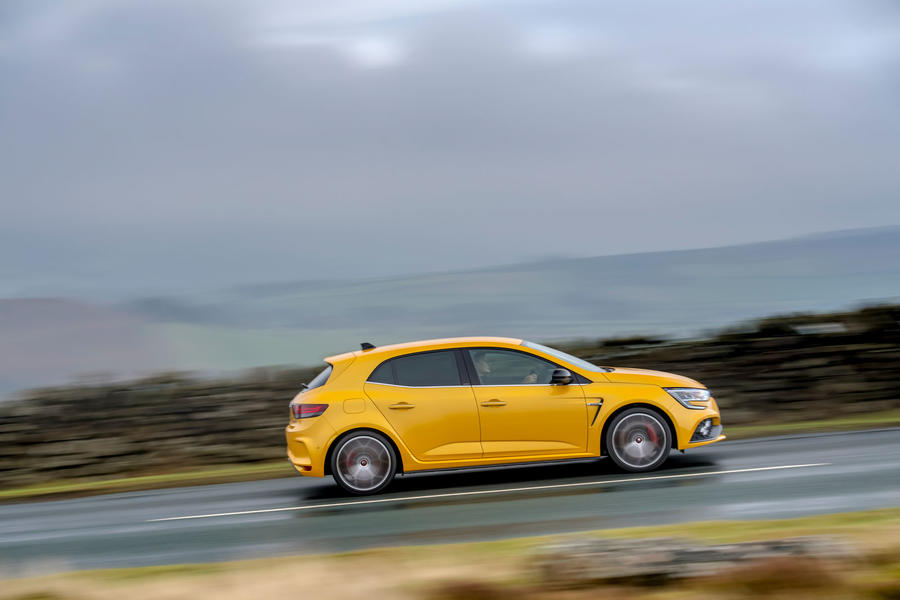 Would this car be any less flawed with a manual gearbox? NO. That's where Matt is wrong in this piece.

Would this car be any less flawed with a manual gearbox? NO. That's where Matt is wrong in this piece.

Maybe but we will never know as there is no choice.  It would however be cheaper, lighter and less complicated.

I take issue with this review that this car's main failing is its auto box. From TopGear's review that notion just seems a convenient fallacy.

Two conclusions, one Focus ST Manual, two thank the lord I do not live in France, sacrebleu.