From £28,9957
Softer Megane RS 300 a more liveable hot hatch than its Trophy sibling, but at the cost of outright engagement
Open gallery
Close

Just like its harder, sharper Trophy sibling, the entry-level version of Renault’s recently updated Mégane RS has been shorn of its six-speed manual gearbox.

If you've read Matt Saunders’ report on the Trophy, you'll know why. It makes for pretty depressing reading, so I won’t delve into it in too much detail here, but effectively it boils down to increasingly punitive emissions-based taxation in Renault Sport’s home country. A Mégane RS with a manual gearbox will cost French buyers more in tax than one with a six-speed dual-clutch automatic, so it has been dropped altogether. Sad news.

A modest hike in power and torque from the base Megane RS’s 1.8-litre four-pot petrol engine is something of a consolation, though; as is the arrival of new headlight and tail-light designs, an improved infotainment system and a redesigned instrument display. That motor now puts out 296bhp and 310lb ft instead of the 276bhp and 288lb ft it made previously and explains why it’s now called the Megane RS 300 (for 300PS, which is 296bhp) rather than the Megane RS 280.

Otherwise, it’s business as usual. You still get four-wheel steering and a set of rally-style hydraulic suspension bump stops. However, the firmer, more aggressive Cup chassis is now available on pricier Trophy models only so this revised Mégane RS 300 makes do with the softer Sport chassis set-up. 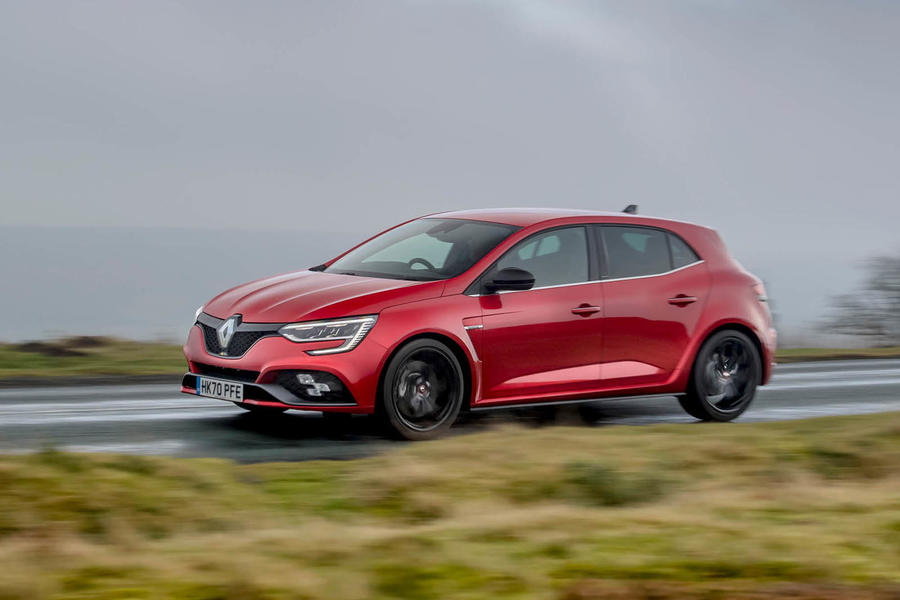 It undoubtedly remains the more usable Mégane RS. Where the Trophy can feel almost unrelentingly edgy and unforgiving on bumpier stretches of road, the base car breathes a bit more freely. It still feels meaningfully taut and controlled in its body movements when you’re travelling with a bit of pace on, but I’d wager you wouldn’t find yourself scrabbling for the keys to literally anything else when faced with a simple trip to the shops.

This is good news for those who plan on driving it every day - which most people undoubtedly will. The trade-off is that in gaining this extra level of pliancy and ride refinement, you lose a good deal of the bite that makes the Trophy models so exciting when the weather’s fine and you’re actually in the mood for a proper thrash. By opting for the RS 300, not only do you forgo the stiffer Cup chassis, but you also miss out on a limited-slip differential, beefier brakes and an active sports exhaust.

You do notice this in tighter, more technical corners. Tip it in and the Renault’s four-wheel steering still makes it feel really agile and willing to rotate, but it just doesn’t sink its teeth in with the frenzied eagerness I remember from the earlier Cup chassis car.

The wet, recently defrosted Oxfordshire B-roads I was driving on will have contributed to this impression, but even in such rubbish conditions, lateral grip levels still felt relatively high. Still, you’d get on the throttle early thinking you’d be able to power out and instead be met by an underwhelming response as the Renault scrabbled to put its power down. It’s not that you’d push into dramatic understeer: you just end up exiting a corner slower than you thought might.

The 1.8-litre engine remains as boosty as ever, and on slippery roads, it can spin its front wheels quite freely when that lump of torque arrives. A lighter touch on the throttle can be handy here. Anything too brutal and you can coax a violent amount of axle tramp out of the Renault.

The six-speed dual-clutch ’box is reasonably well mannered when left to its own devices, but it can be the slightest bit sluggish in its responses when you’re really on it and shifting manually. I was never a massive fan of Renault’s manual transmission, but the greater tactility of a three-pedal set-up certainly suits the character of this car far better.

There are a couple of weird ergonomic issues, too. The paddles, for instance, are too short to use comfortably with your hands on the wheel at a quarter to three. If you scroll through the drive modes via the button on the centre console, you lose whatever you had displayed on the infotainment screen previously. There’s also not quite enough reach adjustment in the steering column, so you have to perch over the pedals if you want to bring the wheel in close to your chest. Nothing major in the grand scheme of things, but together they frustrate. 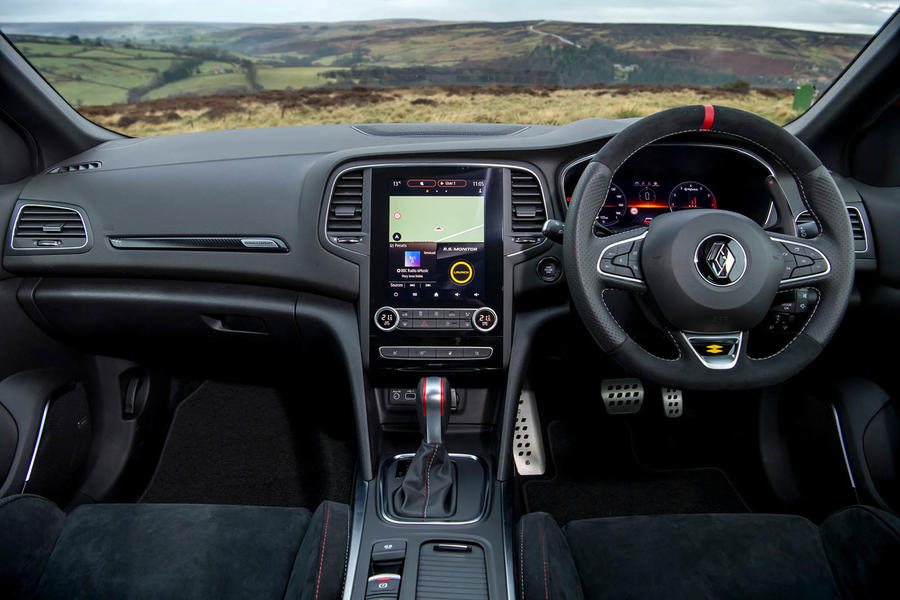 It wouldn’t be at the top of my list if I was in the market for a hot hatch. It might be more liveable with than its Trophy sibling, but I’m sure it wouldn’t be anywhere near as thrilling when the conditions were perfect and the roads were clear.

Some might appreciate that more sensible balance and there’s certainly merit in taking such an approach. But other hot hatches are just as usable day to day, yet arguably even more exciting, involving and dynamically accomplished than the Mégane. The excellent Honda Civic Type R and Ford Focus ST spring to mind, to name but two. 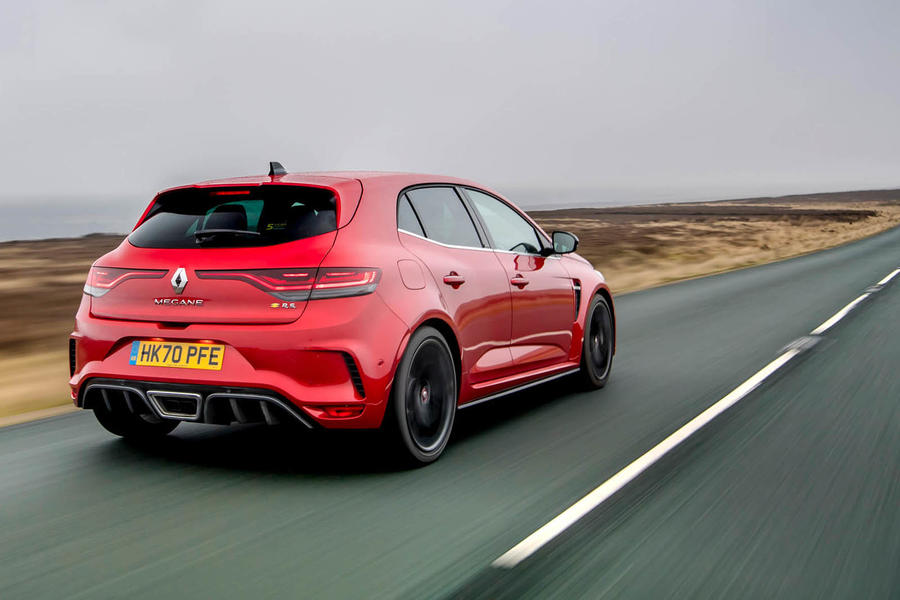 Shame you can't get away from the family car look. The previous model RS looked far more special.

My 80yr old neighbor has a Megan's in the same color,and, at a quick glance, you swear they looked the same, that's Renaults problem with the Megan's, it's not different enough.

My 80yr old neighbor has a Megan's in the same color,and, at a quick glance, you swear they looked the same, that's Renaults problem with the Megan's, it's not different enough.

And a golf GTi etc is different enough from another golf? Isn't that their appeal, that they are performance versions of a standard car, people bemoan the spoilers on a type R as too much and love the conservatism in a golf GTi, so would have thought this Megan's to be spot on. I agree that it looks less appealing than the coupe they had previously but it is still a good looking car, but all the manufacturers are doing R line GT line etc that give the opportunity to have the hot hatch look on a more frugal family friendly model.

Andrew1 1 February 2021
Oh, no! No manual? I wanna have control! Let's get back control of our gear changes.

Oh, I can use the flappy paddles? And it costs me less? And it changes more efficiently? That can't be true, it's project fear.