From £15,7357
Electrified, plug-in hybrid version of the successful Captur could be just what Renault needs to elevate its popularity even further
Open gallery
Close

The Renault electrification programme is gathering a head of steam, and has reached the Renault Captur. On the passenger car front, the all-electric Renault Zoe supermini has been the competent and really quite pretty face of this campaign for the past decade or so; while the Renault Kangoo ZE went on to become the best-selling commercial EV in Europe by the end of 2019. The dinky Renault Twizy made for a fascinating support act, too.

Now, though, Renault has broadened its portfolio of electrified vehicles to include powertrains that the man on the street might deem to be more accessible. So there’s a hybrid version of the RenaultClio supermini; a new plug-in hybrid Renault Mégane Sport Tourer estate; and this, the new Captur E-Tech PHEV.

Based on the Renault-Nissan-Mitsubishi Alliance’s CMF-B platform, it makes use of a normally aspirated 1.6-litre four-cylinder petrol engine, which is paired with a 49kW electric motor and a smaller integrated starter-generator. These draw their energy from a smallish battery that’s housed beneath the rear passenger bench, and which has a usable capacity of 7.5kWh for a WLTP-certified electric-only range of 30 miles.

Plugged into a dedicated home wallbox (which Renault currently provides free of charge via BP Chargemaster), its battery can be topped up from 0-100% capacity in around three hours. Drive is directed to the front wheels via a specially developed multi-mode dog-clutch gearbox that has six forward speeds.

The system has a fairly modest combined output of 158bhp. Renault doesn’t specify a system output for torque, but individually the petrol engine develops 103lb ft at 3200rpm, while the electric motor produces 184lb ft. On paper, performance isn’t particularly electric, then; the Captur PHEV can accelerate from 0-62mph in 10.1sec, which is three-tenths of a second slower than the plug-in Renault Mégane with which it shares its powertrain. 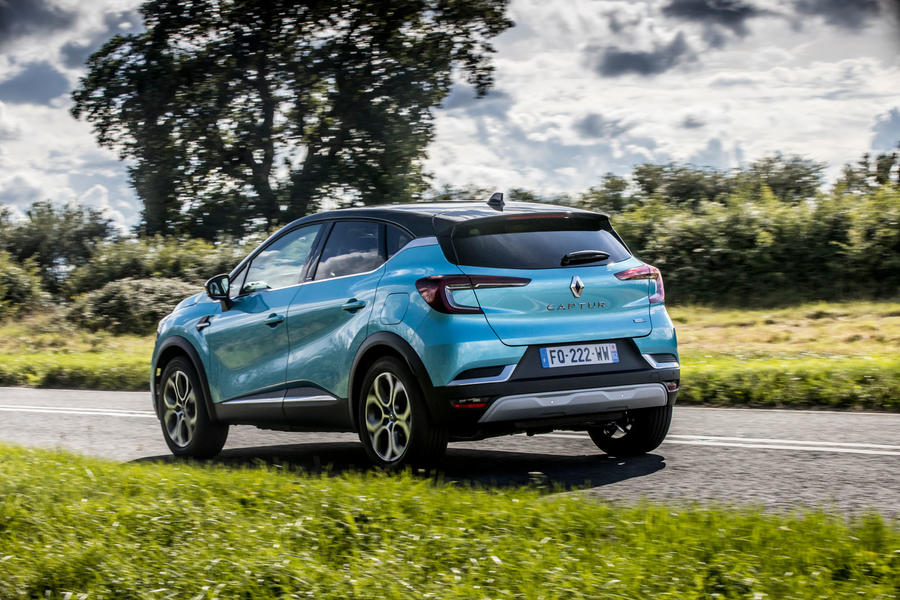 Our test car was a European-spec left-hooker but was nevertheless representative of what we’ll get here in UK when deliveries begin in October. Like the Renault Clio supermini, the Captur’s cabin packs plenty of chic design appeal, and a fairly liberal application of soft-touch moulded plastics on the dash and doors helps to improve tactile appeal. A few of the switches feel a bit flimsy, and the gear selector is as rattly in its housing as ever, but on the whole the Captur impresses.

A sliding rear bench helps out with second-row leg room, so while the back of the Captur doesn’t exactly feel cavernous, there’s decent enough space for an average-sized adult to sit comfortably. Head room is a bit tight, however, and boot space takes a slight hit compared with its non-plug-in range-mates. Where the ICE cars have up to 422 litres of seats-up luggage capacity, the PHEV makes do with 379 litres.

On the road it retains the firmer, more controlled set-up that is arguably the most significant point of difference between first- and second-generation models. The result is a crossover that’s keener-handling than before; one with decent grip, stability and a steering rack that’s intuitively weighted and offers an appealing amount of response just off centre.

But there is a trade-off. With a heightened level of lateral stiffness its body control through faster bends is impressive, but it does make the Captur prone to some jostle and fuss when the road surface underwheel isn’t particularly uniform. This is most noticeable at lower speeds, and particularly around town. Provided you stick with a smaller wheel choice, the Ford Puma feels like the more fluent-riding - not to mention sharper-handling - compact crossover, but it must be said that the Captur does a decent job of softening the blow of sharper secondary impacts.

Still, the Puma isn’t available with a plug-in hybrid powertrain, so the Captur claws back a fair amount of appeal here. The Renault’s set-up is, for the most part, a reasonably strong one. As is the case with the new plug-in Mégane, refinement under load is very impressive. You can hear the four-cylinder motor buzzing away as the revs climb, but at all times it remains a distant, muffled drone that never becomes too overbearing.

Throttle response at lower speeds is good too, and the electric motor provides snappy acceleration between 20mph and 30mph or so. Less impressive is the manner in which the Captur responds when you keep your foot on it. Once the initial surge of electric propulsion expires, you’re left in what feels like an accelerative limbo until the petrol engine spins up fast enough to take over proceedings. Sure, you’re not stuck there for an eternity, but that noticeable falter does mean overall acceleration isn’t quite as linear as you might have hoped it would be.

Still, at the more urban-friendly speeds this Captur is no doubt expected to spend the majority of its time, performance is decent enough. It’s just a pity that it’s not matched with a ride that offers a little more in the way of pliancy in such environments. 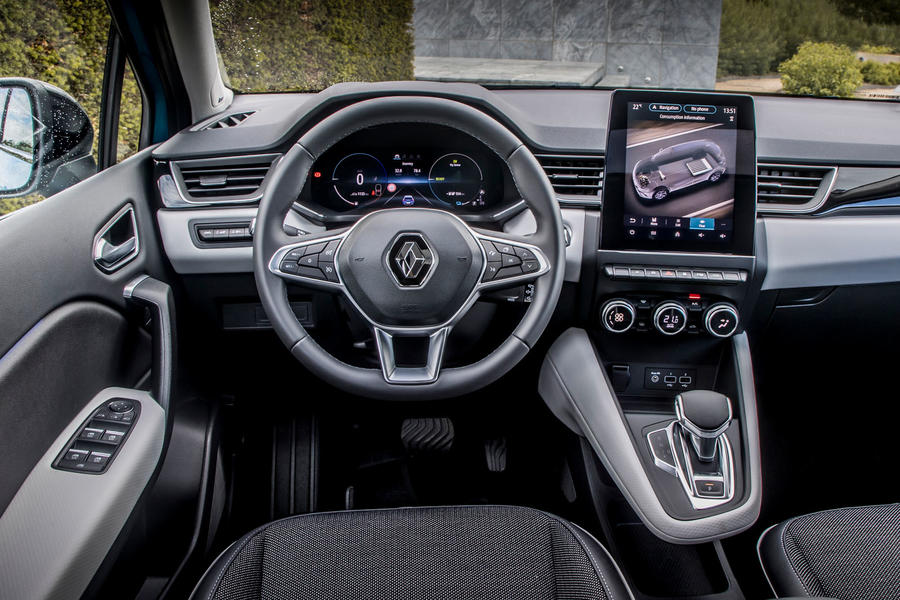 The concept of a plug-in compact crossover is still a relatively new one, so for now the Captur E-Tech PHEV remains an uncommon proposition. The likes of the Kia Niro PHEV and Mini’s plug-in Countryman are arguably its closest conceptual rivals, with the former priced from £30,265 and the latter from £32,980 versus the Renault’s £30,495 list price.

And against those competitors, the Renault wouldn’t be a bad pick. It’s the obvious value choice next to the Mini, while its powertrain is smoother than that fitted to the Kia and its cabin packs more visual pizzazz too. That said, the Captur won’t travel quite as far as the Niro on a single charge (the Kia has a WLTP-certified electric range of 36 miles), but it nevertheless falls into the same appealing 10% benefit-in-kind tax bracket.

If it rode with just a touch more compliance, and accelerated over larger increments with a bit more in the way of linearity, the Captur would be a clear-cut contender for class honours. As it stands, though, it’ll have to settle with being a good choice in this emerging market, as opposed to a great one. 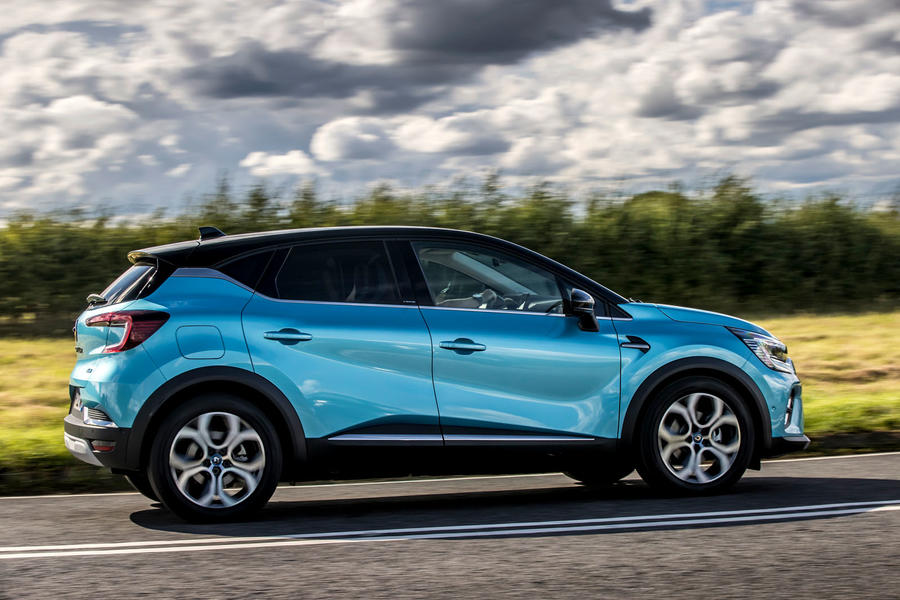