From £38,810
Share review
The Porsche Boxster S is an astonishing car. Faster than ever but just as capable on the handling front.
Share
Open gallery
Close

The new Porsche Boxster – codenamed 981 – represents a clear break from the past. A combination of new detailing, a more cab forward silhouette, larger wheel houses (to accept optional 20-inch wheels), distinctive air vents and a rear wing integrated into the tail lamps give the new Boxster a more striking appearance than ever. New underpinnings boasting wider tracks and longer wheelbase provides it with a more confidence stance.

Its mid-engined layout remains, but it retains its architectural links with the latest 911. Porsche wants models to have as much commonality as possible.

Underneath its new lightweight body, the thoroughly re-engineered roadster shares much of its front end structure with the 911, including its MacPherson strut front suspension and all-new electro-mechanical steering.

Inside, the Boxster and 911 share much of their interiors. The new cabin looks and feels modern. The centre feature is the rising centre console. Housing an armada of switches, it also shortens the distance between the gear stick and steering wheel.

The wider, taller and more supportive seats are positioned lower than before and the added space is obvious. With a 60mm longer wheelbase, cabin length – and seat adjustment - has increased. Tracks widened by 36mm and 6mm front and rear have led to a slight increase in width.

Porsche still offers two naturally aspirated horizontally opposed six-cylinder engines. The 2.9-litre, multi-point fuel engine has been replaced by a 2.7-litre unit with direct injection. Power has increased by 10bhp to 261bhp at 6700rpm, 300rpm higher than before. Torque grows by 7lb ft to 206lb ft on a 400rpm wider band of revs between 4500rpm and 6500rpm.

The Boxster S driven here retains the same 3.4-litre unit, shared with the 911 Carrera. Revisions to the induction and exhaust liberate another 5bhp, taking power to 311bhp at 6700rpm. Torque remains at 265lb ft, but is available across a 200rpm wider range from 4500 to 5800rpm.

A six-speed manual is standard. Porsche expects the optional seven-speed dual-clutch gearbox to be more popular. It has a new electronic control unit for faster shifts and can operate in manual and automatic modes. The gear shift rocker switches still frustrate though. Get the optional shift paddles. You won’t be disappointed.

The classic flat six in the Boxster S is as responsive and memorable as ever, but feels more mature. There is added throttle response, considerable thrust and a stronger feel through the mid-range.

The new Boxster S has a power to weight ratio of 236bhp/tonne, or 230bhp/tonne with the optional dual clutch gearbox. That marks an improvement of around a third over the old car. Porsche claims a 0-62mph time of 4.8sec for the dual clutch-equipped model – a reduction of 0.2sec. An improved 0.30 drag co-efficient sees top speed increase to 172mph.

There is still a choice of normal and sport modes. The latter enhances throttle mapping and traction control. The electro-mechanical steering, with speed sensitive assistance, is better even than the 911’s – superbly weighted, eager to self centre and direct. The new car is as agile as ever, but its longer wheelbase and wider track aids stability. The front is particularly calm compared to the old model, with less bobbing at motorway speeds.

Its defining factor is still its cornering ability. Crisp, balanced and fluid turn-in from the newly configured chassis and a level of traction unmatched in its class endows the Boxster with a high level of athleticism.

Porsche says the Boxster can achieve 1.2g of lateral acceleration on standard wheels and tyres. It resolutely resists understeer and there is no premature intervention from the standard Porsche Stability Management system.

The ride while firm, is terrifically controlled if not quite as cosseting as some rivals. A new suspension mounting system helps reduce tyre noise, making it a vastly improved long-distance companion.

Porsche Torque Vectoring is offered, but only in combination with Porsche Active Suspension management. In itself, PASM isn’t a must-have as the standard setup is so flexible. The standard steel brakes are bang on the money: progressive, high on feel and full of strength.

On first acquaintance, the new Boxster is brilliant and continues to remain one of the world’s most entertaining road cars. With an extravagant new look, classy interior, added accommodation, improved performance, engaging handling and improved comfort, you could argue - at the risk of upsetting the legion of 911 fans - that it is now the most complete model Porsche produces.

What a cracking-looking car! Love the side vents and the rear's profile, and the Boxster's headlamps make all the difference - IMHO the front-end looks less flat and awkward, nor do the headlamps seem too far apart, compared to the new 911. Overall the Boxter's now much more handsome than the 911 drophead - and its engine is in the 'right place'.

And it's capable of approx 35mpg on a long-run! (IME, a car's official combined mpg actually equates to real world touring mpg).

Who, apart from badge snobs and snap-oversteer fetishists, would choose a 911 convertible instead of a Boxster?

[quote Autocar]New look[/quote] You mean "new wheels". The rest is as before. Since its inception the Boxster hasn't changed at all, the same as the 911. People on the street know this, bought and paid for minions like Greg Kable and Autocar appear not to.

Really struggling to see the 'extravagant new look' but as with the previous car, it's preferable to a 911 to me. New one sounds good to drive but I'm still waiting to be convinced by electric steering. Maybe this is the car to do that. One objection though, it uses the same engine as the base 911. Only here they restrict it to 311bhp, the 911 gets 345bhp. An 'RS' boxster, even if it only had the slowest 911's 345bhp, would be the best car porsche makes. And that's why they're never going to make it. What a croc!

[quote The Special One]You mean "new wheels". The rest is as before. Since its inception the Boxster hasn't changed at all.[/quote]

You mean "new post." The rest is as before. Since your "inception" your posts haven't changed at all.

[quote 6th.replicant]Who, apart from badge snobs and snap-oversteer fetishists, would choose a 911 convertible instead of a Boxster?[/quote] As a 911 devotee, and looking for a replacement vehicle later this year, this is likely to appear in my garage before the 911 cab. It's half the price in the US, but with 8/10ths of the 911 experience? And its specification is equal to or exceeds that of many of the earlier 911's I have owned. As a day to day driver in a sunny climate, I can't help but feel this is a better value proposition than the 911. Looking forward to the test drive.

Genuinely bowled over. Think it looks fab in every respect. And the detailing too is great - take a look again at that close-up of the door handles flowing into the side flanks. Definitely now on my register as one to get my mitts on just as soon as a chance comes along.

[quote Autocar] you could argue - at the risk of upsetting the legion of 911 fans - that it is now the most complete model Porsche produces.[/quote]

.... until the next Cayman comes along.

In reality though, rose tinted specs aside, the Boxster S from any generation has been more complete than it's equivalent 911.

As good as this car is though, like the new 991 911, it too also appears to have lost a little of it's character over the old model.

[quote TegTypeR]As good as this car is though, like the new 991 911, it too also appears to have lost a little of it's character over the old model.[/quote] Would you care to elaborate on that 'Teg'. Not saying I disagree, just not seeing whatever it is you see?

[quote The Special One][quote Autocar]New look[/quote] You mean "new wheels". The rest is as before. Since its inception the Boxster hasn't changed at all, the same as the 911. People on the street know this, bought and paid for minions like Greg Kable and Autocar appear not to.[/quote]

Yup, you're absolutely correct - the new Boxster looks no different... 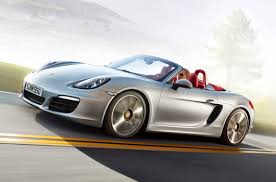 Nice looking car! - Not sure I'd have ever had said that about a Porsche. Not normally my cup of tea.