8
Is the Targa-topped 911 still a poseur's Porsche? We sample the Targa 4S – in distinctive Heritage Edition trim
Open gallery
Close

The Porsche 911 Targa 4S Heritage Edition isn’t so much a limited-run model as a Porsche 911 trivia quiz rendered in metal. It’s replete with brilliantly conceived design details and flourishes that, while individually subtle, add up to a very conspicuous whole.

The first of four planned special editions from Porsche Exclusive, the firm’s bespoke division, celebrating the sport car’s history, it’s focused on the 1950s and 1960s, through homages to the 356 predecessor and first-generation 911.

Porsche buffs will revel in trying to spot every reference, such as the Cherry Red paint, gold trim logos, the original Porsche font, the 1963-era badge, beige interior trim, black brake calipers and a special badge for the rear lid. Even the production run of 992 units is intended to cause knowing nods from those who know their 911s.

According to Porsche Exclusive director Boris Apenbrink, basing the first Heritage Edition model on the 4S version of the Targa rather than the Coupé or Cabriolet is because the folding top version is “the most emotional derivative in the 911 range”.

That’s perhaps another subtle, knowing nod to another long-held 911 convention: that the Targa is the 911 of choice for those whose prioritise style over outright driving dynamics, due to the inherent dynamic compromises in replacing a section of roof with a folding Targa top. Which is what we're here to find out. 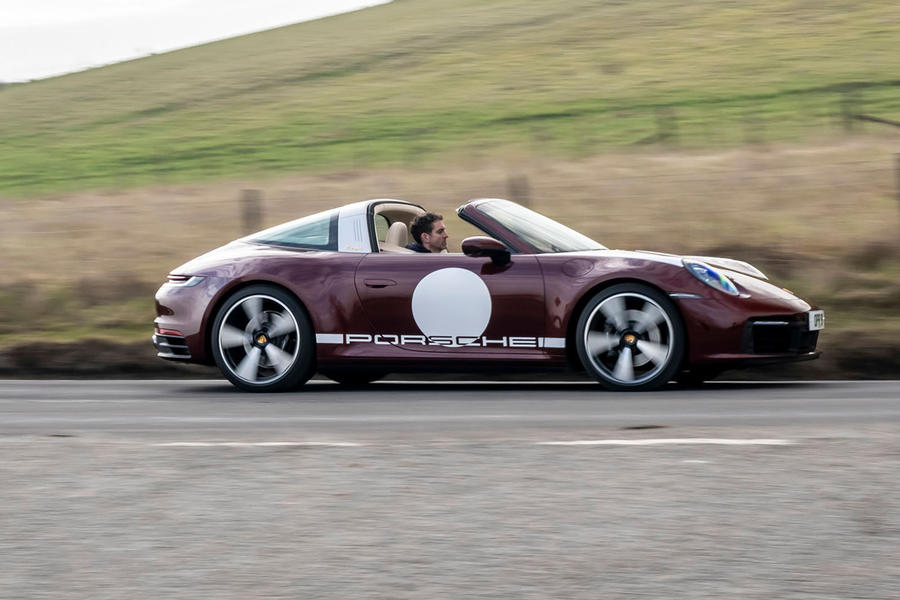 You’d never accuse a 911 of being particularly subtle, especially in Targa form, but with its Cherry Red paint – actually closer to burgundy – racing door stickers, gold logos and other accoutrements, this Heritage Edition has the ability to turn even the most docile passer-by into an amateur smartphone paparazzo.

At £136,643, the Heritage Edition costs £26,918 more than a regular Targa 4S. That extra outlay won’t buy you any more performance, and since the value of style is inevitably subjective, the goal of this test is to judge the merits of the Targa 4S cloaked beneath those special details. And particularly, to consider the inevitable compromises inherent in a Targa-top 911: compromised rigidity, greater weight and a higher centre of mass.

We’ve previously sampled the latest Targa 4S on British roads in European-spec, left-hand-drive form, but this is our first outing in a UK-spec right-hooker. Porsche is clearly aware of the Targa’s reputation as the less dynamic 911 bodystyle and, with this 992 generation, has put a focus on reducing any handling deficit between it and its Coupé sibling. And, taken in isolation, the Targa 4S is impressive.

On both A-roads and bumpier British B-roads, the ride is on the firm side, but not so much that it would become tiring over extended distances. And it’s rewarding and engaging to drive, with sharp, direct handling that helps to build confidence. Exactly as you’d expect from a 911, really.

That twin-turbo flat six remains responsive and brisk. The peak output of 444bhp comes at 6500rpm, with maximum torque available between 2300rpm and 5000rpm. It allows for rapid, confident and hugely satisfying progress, even if you never try to challenge the claimed 0-62mph time of 3.8sec.

And while the PDK ’box might not offer the full engagement of a manual, it is incredibly well tuned to the engine, changing gear exactly when you’d want it to in automatic, and hugely responsive when controlled via the paddle shifters.

As with other versions of this generation of the 911, the engine isn’t quite as sonorous as you’d like if you’re not troubling full throttle, a situation that isn’t even remedied by lowering that Targa roof to let in the elements. It’s not a major criticism but it is a little disappointing, especially given the styling theatre created by our Heritage Edition test car.

Conversely, although roof up or down there is a reasonable volume of road noise present in the 911’s cosseting, comfortable cabin, it’s not as wearying as some drop-tops of its ilk.

Returning to the subject of that Targa top brings us to the inevitable comparison with its 911 brethren. And it won’t be a surprise to read that the Targa 4S isn’t quite as sharp, focused or exciting as the fixed-head Coupé. And, as our previous experience showed, for those prioritising driver engagement, the lighter and slightly cheaper 911 Carrera S Cabriolet might be a better roof-optional choice. 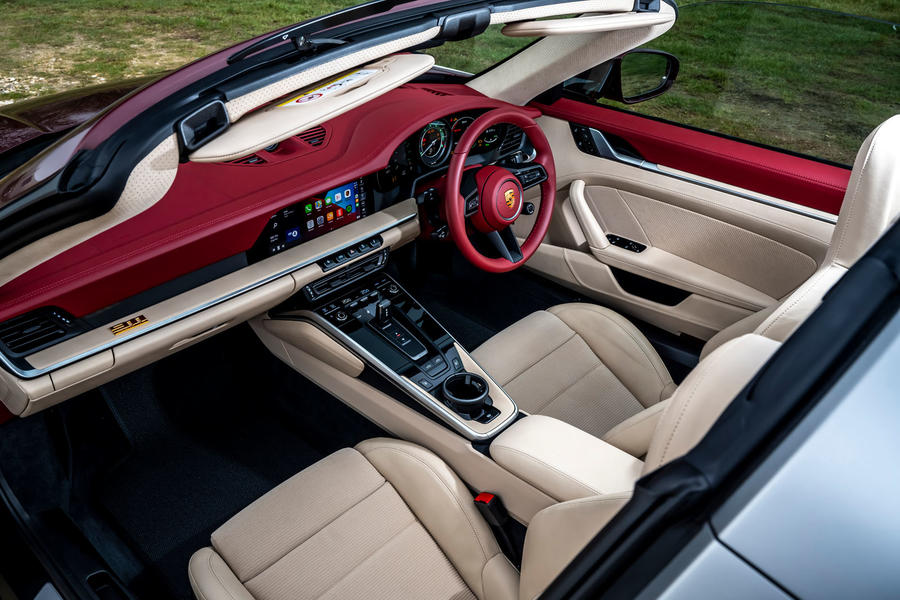 But, as we've explained previously, there's always a challenge and a compromise when it comes to speccing a 911. And there is, undoubtedly, a definite appeal to the style and substance of the Targa 4S. If you do hanker after a fast Porsche convertible that blends both style and substance, it’s a compelling choice - and given how rare opportunities to access the full performance potential of a 911 on UK roads are, the trade-off in absolute dynamism is relatively slight.

That’s for the standard £109,725 Targa 4S, anyway. Whether the Heritage Edition is worth an extra £26,918 depends on your budget, your love of 911 history - and how prepared you are to attract attention wherever you go. 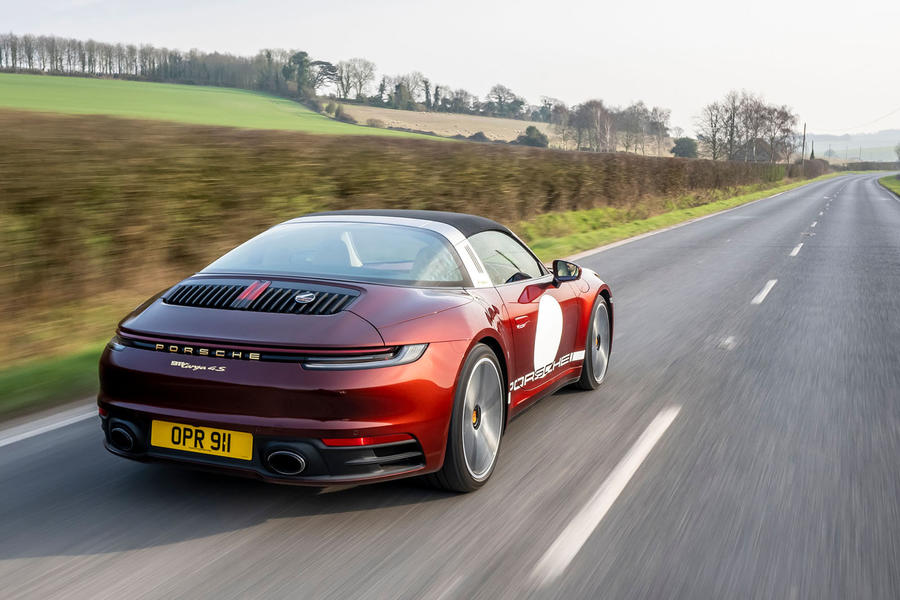 Love everything about the Heritage Edition of the 911 Targa except the price point.  Presently I own a 2018 Targa 4S and before that I had a 1984 911 Targa.  So I would call myself a Targa-man.  The exterior color choice is dynamic while the interior color leaves me a bit perplexed since I would not have put the two color choices together, but that is just me.  The other combinations look stunning so I am definitely in the market to upgrade.  Keep me interested as you always have but never eliminate this model.

Always beware of the limited edition. It usually means that the model is not selling well and needs a bit of a push in the market.

si73 12 March 2021
Gold badges and Maroon dash aside, I love the look of this, I like the colour and wheel combo which you can probably get for £26k less with the standard targa S, however look at the size of the thing, it's massive, especially when compared with previous 911s. I've been looking at 993 onwards side images with a driver, to see how much bigger around the driver this looks, and it's amazing how the driver seems to almost disappear in this car compared with 993, 996 and 997 generation cars, the 991 looks very similar. So I can't imagine the latest 911s being as particularly easy to thread down narrow UK b roads as previous generation cars.
View all comments (7)