8
Oh so versatile on paper, but does combining Targa body and GTS chassis ask too much of the 911?
Open gallery
Close

Of the endless 992-generation Porsche 911 variants, the 191mph Targa 4 GTS is the one you’re least likely to see.

For another, and GTS-grade or not, most people pining for an open-air 911 experience will gravitate towards the Carrera Cabriolet, the current iteration of which suffers no notable drawbacks stemming from the loss of the coupé’s solid roof panel and doesn’t require coming to a standstill to lower or raise the roof (part of the Targa’s artful deck extends beyond the car’s footprint mid-action, so necessitates stopping).

Most of all, though, you might question the wisdom of giving the heaviest, most touring-flavoured model in the 911 line-up a GTS makeover intended the make the car feel more focused and aggressive. That said, the Targa doesn't get the 911 Turbo-derived PASM Sport suspension that's intended for very hard driving and is found on the coupe and cabrio GTS derivatives. The setup lowers the ride-height 20mm from standard and features helper springs at the rear, which are designed to ensure the main springs remain seated after instances of maximum extension. The Targa GTS does with the regular PASM suspension, which drops the body 10mm.

Elsewhere, the 3.0-litre flat six's uplift in power, from 444bhp to 473bhp, is of course welcome as part of the GTS overhaul, as are the staggered, smart (21in at the back, 20in at the front, Turbo S design) centre-lock wheels, plus the Turbo-grade cast-iron brakes. 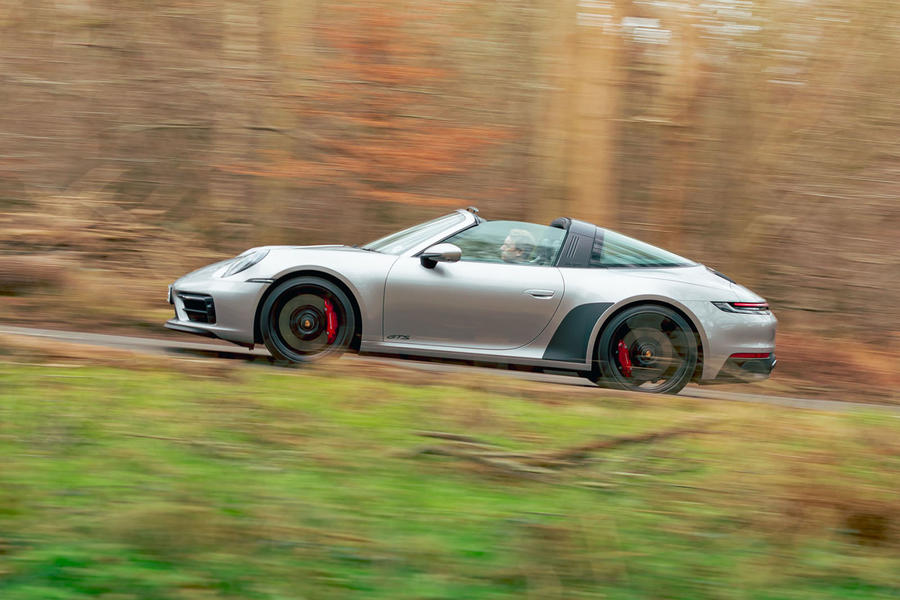 No doubt, the Targa 4 GTS is an immensely desirable car, and any criticism as regards the concept of pairing the Targa with GTS running gear is going to come down to splitting hairs.

It also succeeds as an object. The curved pane above the rear axle and the punnet-handle hoop (dark for GTS, rather than the regular silver) are an attractive pair, and the predatory stance is just so. This example, in GT Silver and with the 18-way adaptive sports seats, comes in at almost £140,000 but in fairness feels at least as special as any Aston Martin Vantage Roadster or Audi R8 Spyder. To these eyes, silver-painted wheels, rather than black, would really set it off.

The extra-vocal GTS exhaust is welcome, too, and the difference is appreciable whether you’ve got daylight shining directly into the cabin or not. The temptation to unleash the engine and get up to the 7500rpm redline is that much greater in the GTS not only because of this more aggressive edge to the exhaust note but because the revs seem to build more quickly and freely during the final 1000rpm or so compared with the less powerful but mostly identical units in the regular Targa 4 and Targa 4S.

Overall, this is also clearly as capable as the Targa gets, with unbreakable traction, nigh-unbreakable grip, plenty of accuracy and pretty outrageous reserves of composure even on more inhospitable British B-roads. Able to hit 62mph in 3.5sec, with commensurately rapid in-gear performance, it's also faster than anybody needs, with a deliciously crisp dual-clutch gearbox playing its part. It is a stunning powertrain with a chassis to match, but is also happy enough bumbling along at 1600rpm.

The committed stuff, however, is done through ever so slightly gritted teeth. The regular Carrera GTS coupé weighs 140kg less than the Targa 4 GTS, and you can feel the benefit of that in every direction change and compression. It earns the GTS hardware, revelling in it, and puts the added control to better, more discernible use. The heavier Targa is always working harder, and enjoying itself less, and in general becomes less natural and joyful as you push on. What this car really wants to do is sit back, enjoy the weather and cover good ground in speed and style but without overexerting itself. 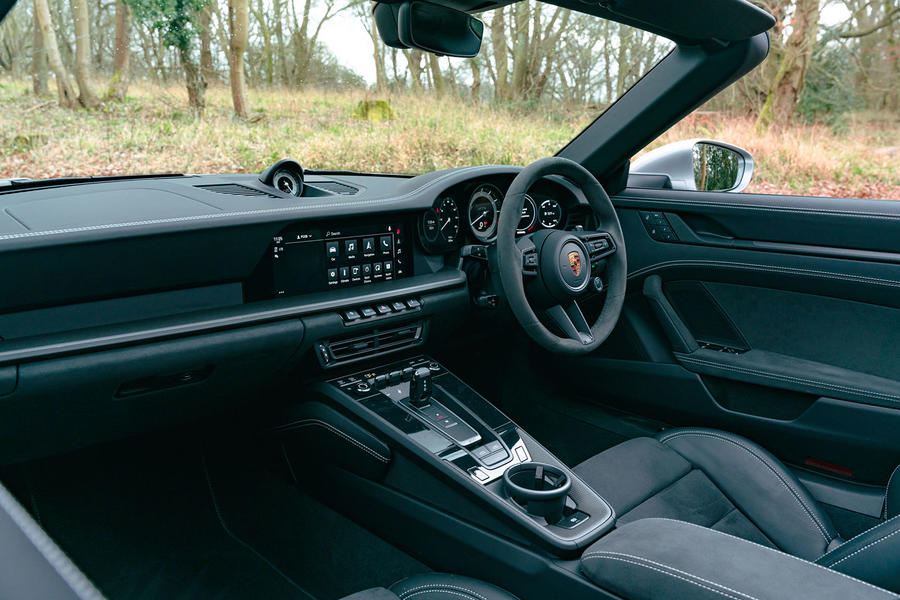 Which is exactly what you should let it do. I’d save the £11,000 it costs to have the Targa 4S ‘upgraded’ to GTS specification (accepting that the GTS package includes many usually optional elements of equipment as standard, and this some ways represents good value) and instead spend the money on indulging the regular Targa’s debonair soul with the perfect colour and trim options.

Because while in the past the GTS package was something of a parts-bin special, for the 992 generation it exists as something more individal – something, say, 35% of the way between a Carrera S or 4S and the full-blown 911 GT3. This state of affairs doesn't suit the Targa so well because Targa and GT3 sit at opposite ends of the 911 spectrum, related in DNA but very different beasts. 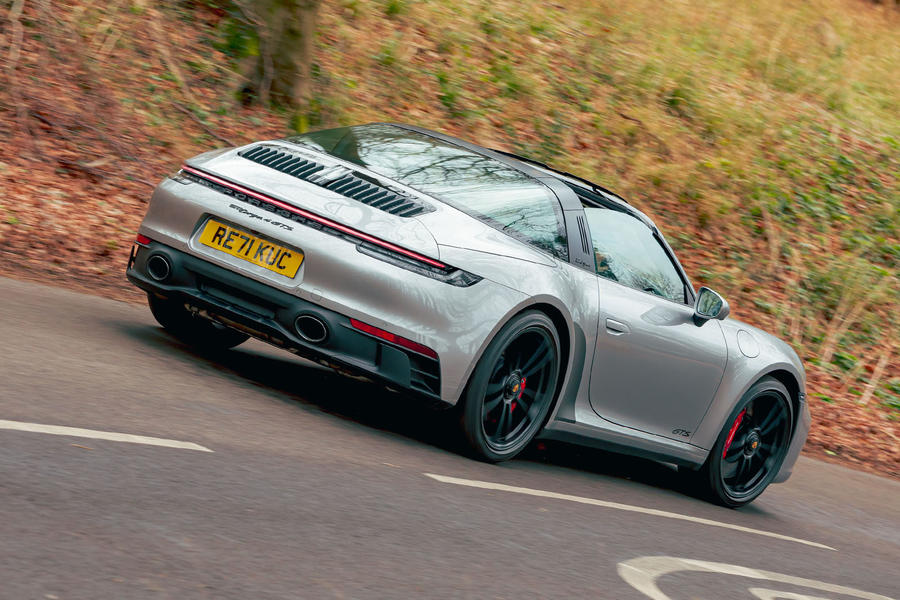 Targa does not have Turbo derived suspension. No helper springs lol and not an option.

Anton motorhead 22 April 2022
No mention of front end bobbing. Has that been completely eliminated in the latest versions of the 911? Anyway, I would prefer a Cayman/Boxter any time. They are smaller, better looking - to me, more than fast enough and have their engines in the right place.
Boris9119 21 April 2022

It reads like you really wanted to diss it, but doing so would taint Autocar's relationship with Porsche, so you tried to sit on the fence. I say tried, because any serial Porsche owner will now that.

If it seems like I'm sitting on the fence it's because this isn't a simple black-or-white, good car/bad car kind of review (nothing unusual about that). Fundamentally the 992 is an extremely good performance car so there's lots to like, but it's just not at its most convincing in Targa GTS form, for the reasons outlined. Nothing to do with our relationship with Porsche, as you know.