From £42,8979
The fastest four-cylinder Cayman is rampantly quick, but it lacks an element of old-fashioned fun
Open gallery
Close

This GTS is the most hardcore version of the Porsche 718 Cayman money can buy – at least until a GT4-badged variant arrives from Porsche Motorsport, probably at some point later this year, with six howling atmospheric cylinders taken from the 911 GT3.

True to GTS form – this, remember, is a nameplate also established on the 911, Cayenne, Macan and Panamera model lines – it’ll set you back a little more than the mid-range Cayman S but comes with the full complement of optional equipment you might consider signing for anyway.

This includes the Sport Chrono Package, the Sports exhaust, PASM dampers and a mechanical limited-slip differential. There’s also a brilliantly unfussy steering wheel of just 360mm in diameter and, in the case of our test car, a gearlever that denotes the presence of a manual transmission. A PDK dual-clutch automatic with an additional seventh forward ratio is optional. Either way, you get that differential in the driven rear axle.

Features you can’t get on lesser Cayman models no matter how much you’re prepared to spend come in the form of reprofiled front and rear aprons, which respectively tout blacked-out intake blades and a subtlety larger diffuser, and further dark accents dotted around – notably within the LED headlights and tail-lights. If Porsche’s intention was to present this as some sort of baby supercar, consider it a job well done. 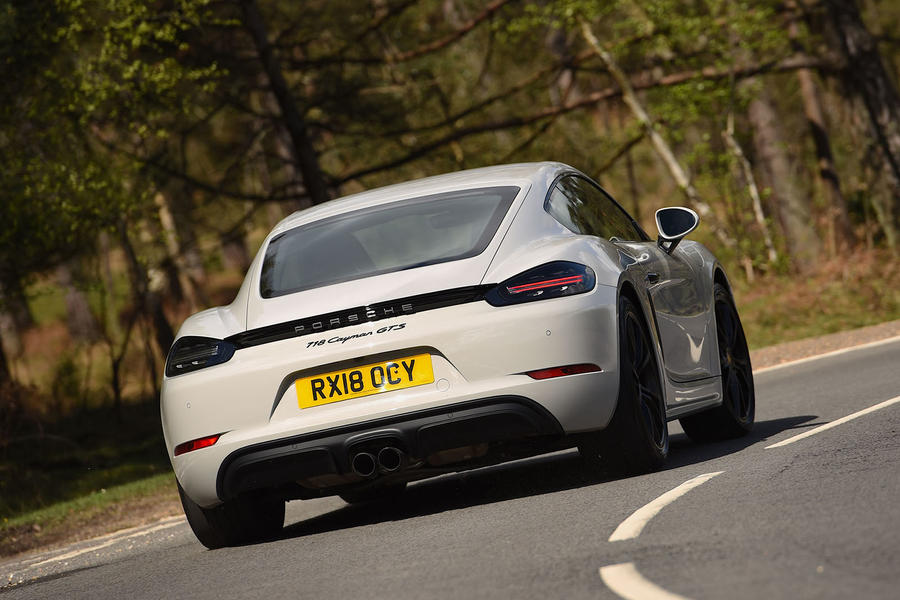 Before we discuss the process of driving this unusually tactile mid-engined coupé, you need to establish how you feel about a four-cylinder sports car that costs £76,000.

Granted, our test car's figure is some way in excess of the GTS's £59,886 base price and is chiefly down to its superbly crisp composite brakes (£5117), the perhaps overly firm embrace of its optional bucket seats (£2316), a fashionably ordinary exterior hue known as Crayon (£1658) and crystal-clear LED headlights that adapt their gaze for oncoming traffic (£1397). Nevertheless, for many that kind of money should still bequeath at least half a dozen pistons.

Not that this 2.5-litre boxer engine has ever wanted for raw performance, and for this application a new intake duct and ‘optimised’ turbocharger raise its output to 361bhp – 14bhp over the £51,850 Cayman S. For manual cars, the 0-62mph time remains at 4.6sec, although top speed is nudged up to 180mph – not bad for the baby of Porsche’s sports car line-up. PDK models have an identical top speed, but such an absurdly quick ’box shaves 0.3sec from the sprint to 62mph.

Torque of 310lb ft represents a negligible increase (PDK models tout 317lb ft), but that it arrives at 1900rpm and only begins to fade away at 5000rpm gives the GTS the breadth required to take apart just about any stretch of road you care to fire it down, not to mention vast day-to-day usability. This despite the fact that its six gear ratios could still do with being a little more closely acquainted with one another, particularly as the markedly oversquare four-pot likes to spin out all the way to its 7500rpm redline.

That’s a small niggle, though, because this car’s chassis is world-class. All GTS models get PASM adaptive dampers that drop the ride height 10mm, although our example’s Sports suspension (£168) doubles that. Given the 20in wheels on which this car sits – borrowed from the 911 Carrera S – that might give cause for concern, but on British roads you’d never really suspect the presence of pruned springs. Traction, meanwhile, is immense.

The Cayman GTS's jive is characterised by the near immediacy with which the body’s vertical movements remain in step with the road and the sympathy of the interchange from bump to rebound. It feels considerably tauter than the equivalent 911, but with only a small trade-off in pliancy – something that makes the absence of any significant jostling in the suspension all the more miraculous.

The electromechanical steering also deserves special mention – it will feel breathtakingly precise to the uninitiated, and with such an unflappable platform from which to operate lends the driving experience a purity uncommon even for mid-engined machines. There’s a notable absence of inertia as the nose flatly darts through direction changes, which is an impressive as it is perturbing if you enjoy – depend on, perhaps – explicit weight transfer to feel you’re getting the most out of a chassis. 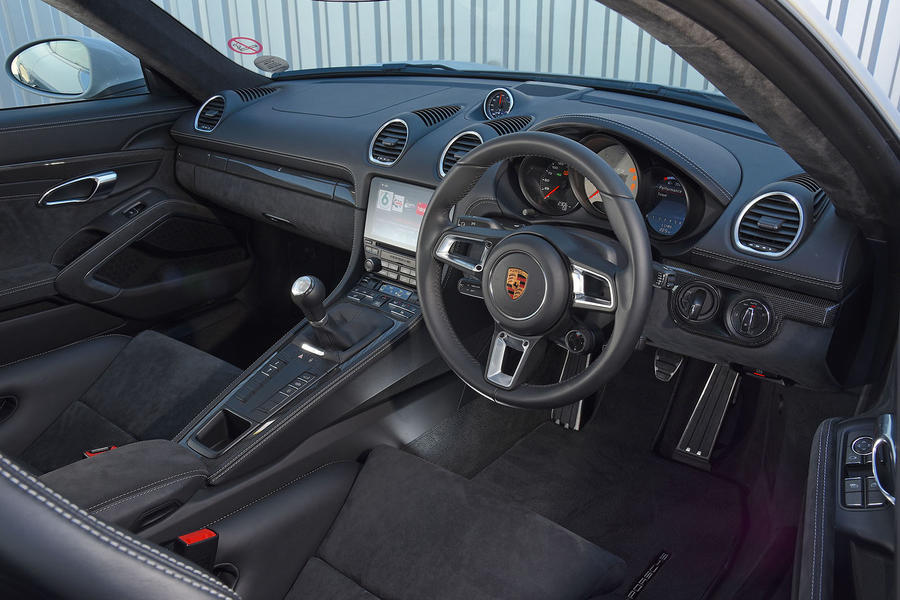 If your criteria are technical prowess and sheer point-to-point pace, it’s easy to conclude that this is the best of the 718-generation Caymans and consequently yes, you should buy one. The GTS is rampantly quick if you’re willing to diligently work the tight gear throw of this six-speed manual 'box.

But perhaps it lacks an element of old-fashioned fun and reward. Maybe the chassis modifications of the GTS have moved its envelope of adjustability a fraction beyond what’s possible – well, what’s legal or, indeed, ethical on the public highway. Too much stability, on both throttle and brakes? Many will consider it so.

Is, then, the Cayman GTS a five-star car? As something so stupendously proficient it may very well be, even allowing for an engine note that isn’t as distinctive as we would like. But that’s a verdict we’ll derive from the incoming full, exhaustive road test. 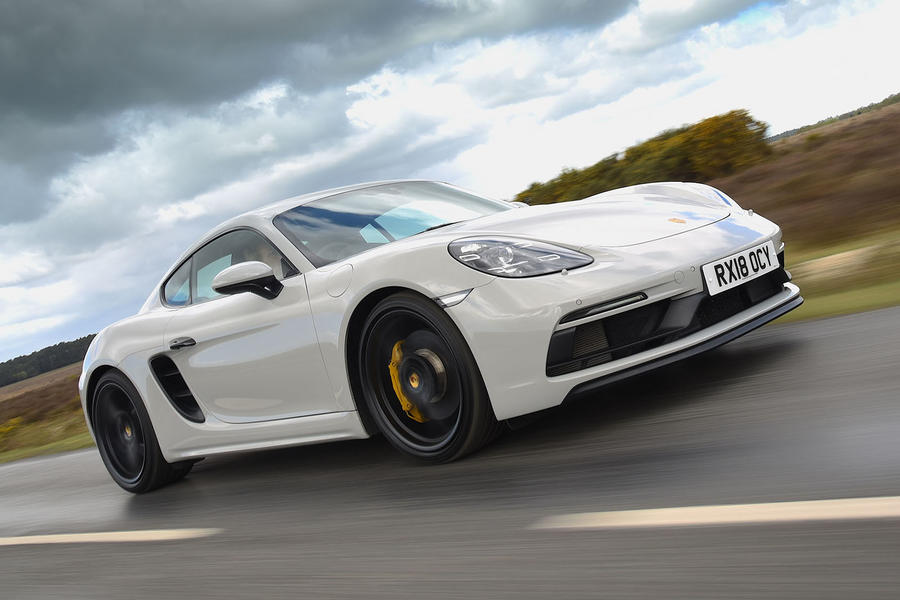 Porsche should abandon those

Porsche should abandon those engines and the turbo on Carrera.

£1700 to finish it in a non-colour! Porsche marketing is becoming even more arrogant extortion of the brainwashed fools. A shame, because it’s diluting the engineering excellence of the brand.