From £44,7589
Porsche's drop-top sports car already had a strong driver focus, but the Boxster T goes further - and is all the better for it
Open gallery
Close
by Dan Prosser
25 February 2019
Share

Take one entry-level Porsche 718 Boxster, load it up with all the tastiest hardware from the options list, then season with exterior decals, fabric loops for door pulls and contrasting grey mirror caps.

The 718 Boxster T’s recipe is a straightforward one and there are no comprehensive re-engineering works to speak of. But just like the 718 Cayman T previously reviewed, those apparently minor revisions are enough to make the Boxster T a substantially more involving roadster than the car it’s based upon.

On top of a standard Boxster the T gets Porsche torque vectoring (which includes a limited-slip differential), Porsche active suspension management with a drop in ride-height, Porsche active drivetrain mounts, Sport Chrono (incorporating a customisable driving mode and an intermediate setting for the stability control) and 20 rather than 18-inch wheels.

You could specify all of that on a basic Boxster, but it’ll turn out more expensive than the £53,006 Boxster T. And whereas ticking the box for Porsche Active Suspension Management will lower a Boxster by only 10mm, the Boxster T sits 20mm closer to the road.

With bigger wheels and a lower ride-height the Boxster T looks aggressive and poised. Within the cabin you’ll find an Alcantara-trimmed steering wheel, smaller in diameter than a standard Boxster’s helm and exquisite to hold, and possibly even a large cubby hole where the infotainment system would ordinarily be (you can choose to have the stereo and touchscreen left in at no extra cost).

The turbocharged flat-four engine is just as you’ll find it in a basic Boxster, meaning 296bhp arrives at 6500rpm with 280lb ft of torque ready from 2150rpm. Equipped with the seven-speed PDK transmission, Porsche quotes a 0-62mph time of 4.7 seconds and a 171mph top speed.

The 718 Boxster and Cayman T follow last year’s 911 Carrera T. With no more power but all the right chassis hardware, the 911 Carrera T had a sharper edge than a basic 911 Carrera as well as its own character. The mid-engined cars now set out to do the same thing. 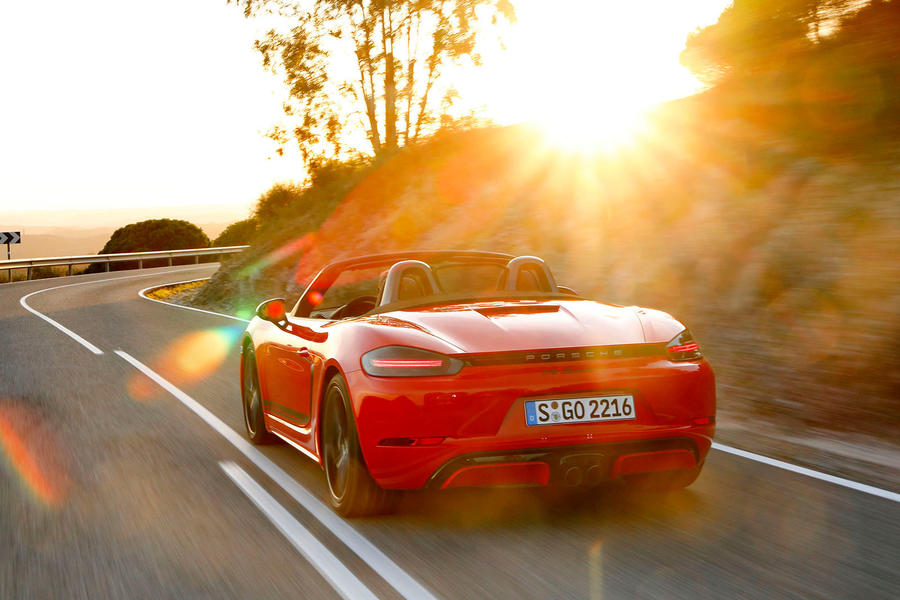 The standard Boxster is already a very capable two-seat sports car, but that 20mm suspension drop means the Boxster T feel appreciably sharper in bends. It finds its set the instant you turn into a corner, rather than taking a moment or two to transfer its weight onto its outer two wheels.

In fact, finding fault with the way the Boxster T’s chassis behaves along a winding road is close to impossible, for it deals with bumps in the road surface brilliantly, its keeps the mass of the body in check over crests and through undulations, the damping in heavy compressions is faultless, and once into a corner, the balance of the chassis is absolute.

If there is one word that sums the Boxster T up, it’s confidence. You feel completely assured pointing it at speed through sequences of bends, but while the car is so competent that it seems it’ll never bite, it manages also to be involving and fun to drive. The steering is very good, too, being both uncannily accurate and also perfectly judged in terms of weighting and speed. The standard cast iron brakes are faultless in road use.

It may have a less compromising brief than a standard Boxster, but the Boxster T would still be perfectly useable every day. Its ride quality is sophisticated and pliant, the cabin quality is very good and there’s even plenty of storage space in the front and rear boots. All that lets the Cayman T down is its coarse and unrefined soundtrack, particularly when the engine is worked especially hard.

Although this model shares its 2-litre turbo engine and uses the same standard-fit sports exhaust, the Boxster T sounds far more agreeable. The Cayman’s coupé roof almost certainly amplifies the exhaust note that works its way into the cabin, because in the Boxster T it doesn’t sound anything like as rough. This car is a lot like the Cayman T, almost indistinguishable to drive along a twisty road - it just does without the coupé’s single big weakness.

Though its turbo engine doesn’t have the same soaring character as the long since departed normally-aspirated flat-six, it is actually very good in objective terms. It needs 2800rpm before it does anything whatsoever, but beyond that it’s very punchy, mid-range torque is enormous and it even pulls hard all the way through 7000rpm. The twin-clutch transmission is very good, although it does hunt around a little in auto mode, but for this sort of car a manual is surely the more appropriate transmission.

Whichever gearbox you favour the Boxster T is a supremely impressive sports car. It is no better or worse to drive than the Cayman T for having a roof that can be dislocated. In fact, the option of lowering the hood perhaps makes it the more appealing car overall (although you do lose a useful storage compartment above the engine bay). 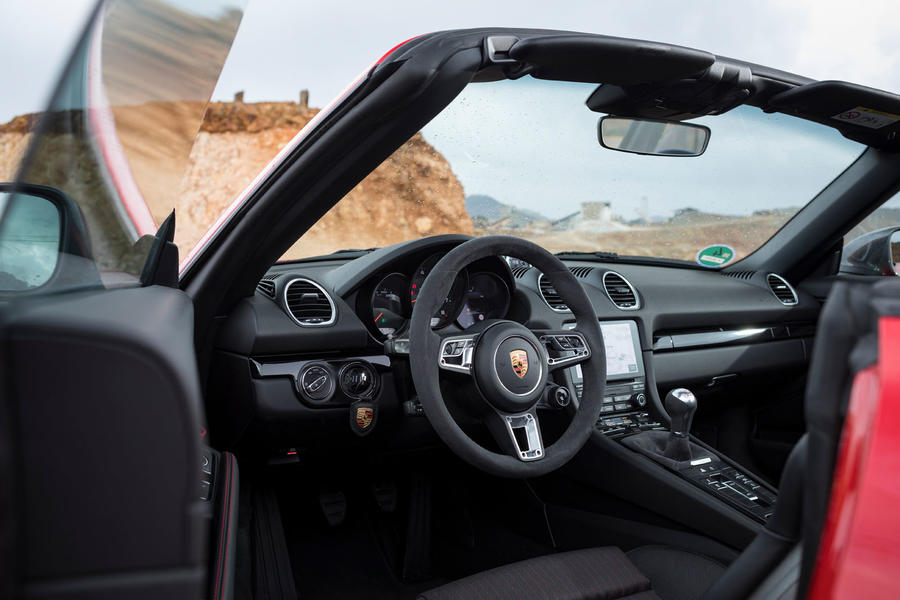 It was only the Cayman T’s coarse soundtrack that really counted against it. Not so afflicted, the Boxster T is an even more convincing machine.

At £53,006 it is close to £2000 more expensive than the fixed-roof model, but that seems like a small price to pay for its sweeter soundtrack alone.

If what you’re after is a driver-focussed drop-top sports car, the 718 Boxster T should not only be on your shortlist, but right at the top of it. 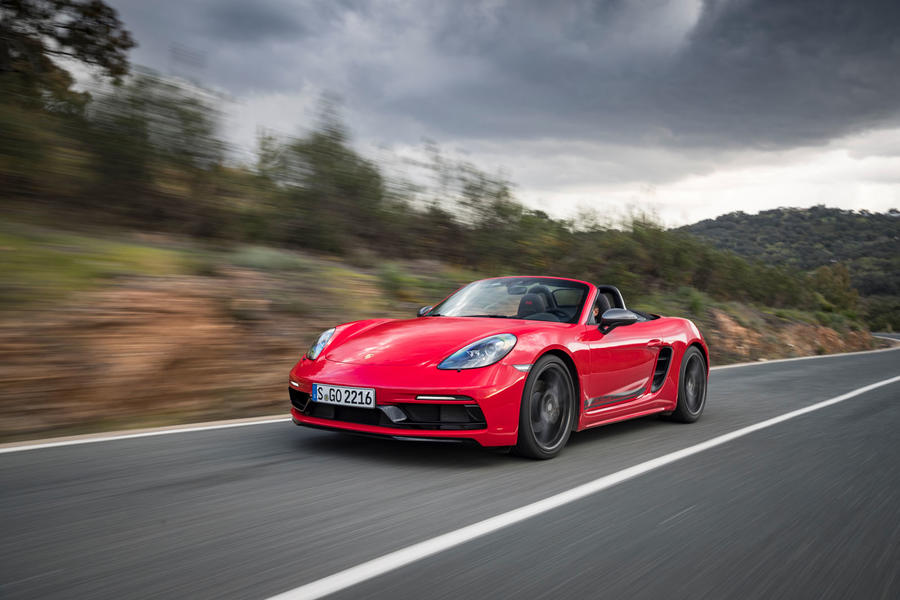 Coming soon in the GT4, the good news is there will be substantially more GT4 this time around, maybe even enough for everyone given the demand has a habit of evapourating once the sniff of a quick profit is lost. Only downside is the price hike. At an invite customer clinic here in the USA recently the Porsche North America glitterati were indicating around $100k before options, thats nearly $20k more than last gen which was with hindsight admittedly underpriced. A current 718 GTS runs more than the first gen GT4, so these numbers sounded perfectly plausible to me. With soft prices here in the USA on the first gen GT4, that's the value in my book.