The expanded, more sensible estate version of Peugeot’s rakish compact saloon, which gains in rear storage space but creates debate as to whether the switch in bodystyle has improved or diluted the 508’s distinctive design.

A modest 40mm lengthening and 17mm taller roofline has pushed boot capacity to a commanding 530 litres, up from 487 in the fastback, with split-fold rear seats raising that figure to 1780 litres.

It is tested here in top-spec GT trim and with a petrol engine in its highest state of tune, which is available only with an eight-speed automatic gearbox. The 221bhp 1.6-litre turbo four-pot will likely be a rare sight on Britain’s roads, as Peugeot expects diesel models to make up the bulk of sales.

It rides on 19in wheels, like the more mainstream 1.5-litre diesel GT Line we tested recently - but unlike that car, this SW comes with adaptive dampers as standard. GT cars also receive a leather interior, electrically adjustable front seats, a Focal premium sound system and adaptive cruise control with lane keep assist.

A few options ticked, including a panoramic sunroof and night vision system, pushes the asking price of our test car north of £41,000 - putting the SW firmly among top-flight mainstream rivals, and is nipping at the heels of more premium names like the Volvo V60 and Audi A4 Avant. 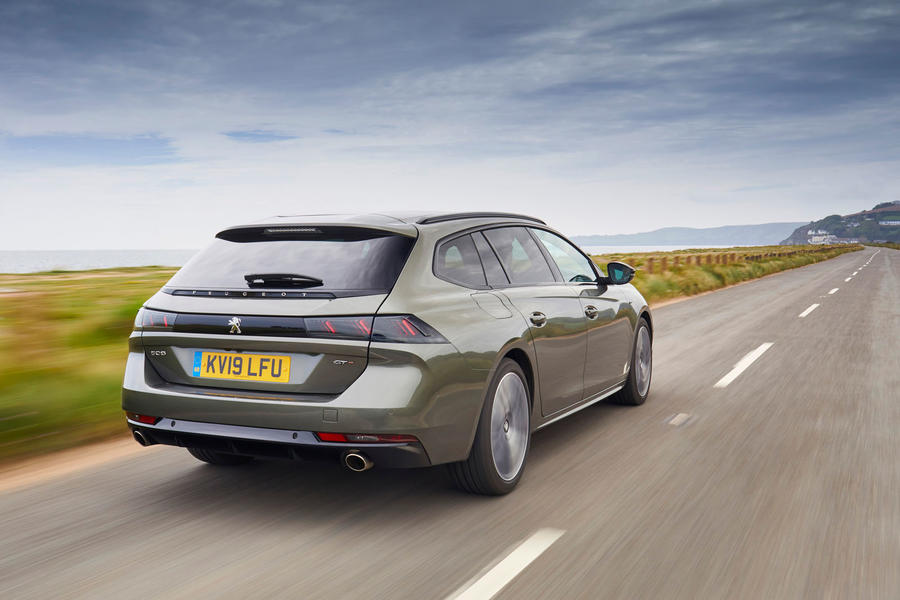 No more spacious than the saloon for front-row passengers, though a generally high level of trim quality makes it a pleasant place in which to sit. Soft-touch materials cover most surfaces, and you have to go hunting for scratchier ones.

The leather seats may have been given the nod by German comfort campaigners Aktion Gesunder Rücken, but they place you slightly higher than you’d expect given the slick exterior styling, and the prominent headrest forces a more upright position than some will like.

Rear passengers will appreciate the increased head room, though with the underlying platform unchanged from the saloon, there’s no extra leg room to be found. Adults may need to tuck their feet under the front-row seats, but kids will be perfectly at home here.

The real gains are in the boot, which has a flat floor and no lip for easier lifting. The loading sill is usefully low, it’s long enough for larger loads without needing to bring either the through hatch or the split-folding seats into play, and the smart tailgate (standard on GT trim cars) lets you wave a foot to open it rather than fish for keys.

Peugeot’s i-Cockpit creates a driver-focused cabin, with the now-signature small steering wheel leaving ample room to see the 12.3in digital instrument cluster. It’s a high-resolution screen that’s filled with useful information, though perhaps isn’t quite as customisable as other fully digital systems. The 10in widescreen infotainment screen isn’t quite as crisp, and is noticeably blocky when displaying the rear-view camera, but does play nicely with both Apple CarPlay and Android Auto.

The compact steering wheel is incredibly light, which initially feels at odds with the sheer size of the car, but it gains weight nicely at speed. Steering is responsive enough, though the lane keeping assist function can be a little too keen to force you back towards what it deems the middle of a lane.

The 1.6-litre petrol engine delivers more assured progress than the entry-level diesel model we tested previously, managing 0-62mph in 7.4sec, but seems happy to use a significant portion of the rev range to achieve it. The reluctance of the gearbox to shift up under a moderate throttle does little to limit the somewhat coarse engine noise, either.

Even in comfort mode, it held onto cogs for longer than expected, and while Eco mode helps keep things under control, it does nothing to mitigate the noticeable road roar. Column-mounted paddle shifters are a little on the small side, should you wish to take charge, and a manual mode hands back some control. Either way, an average touring economy of 39.8mpg is merely adequate - longer-distance drivers and fleets will almost certainly be better served by the BlueHDI 180 diesel.

Those hoping that adaptive dampers would offset the effects of the 19in alloys will be a little disappointed. While stable at city speeds, vertical body control remains lacking, thumping over potholes and proving somewhat bouncy in the Comfort setting, but not all that locked down in Sport. This mode certainly firms everything up, and it hangs on well in corners, but doesn’t deliver the precision you’d hope for given the amount of jostle experienced in the cabin when travelling at speed. A shorter ride in a version with 18in wheels showed only marginal gains in terms of comfort, too, though compared with fixed damping and larger wheels, things do show signs of improvement. 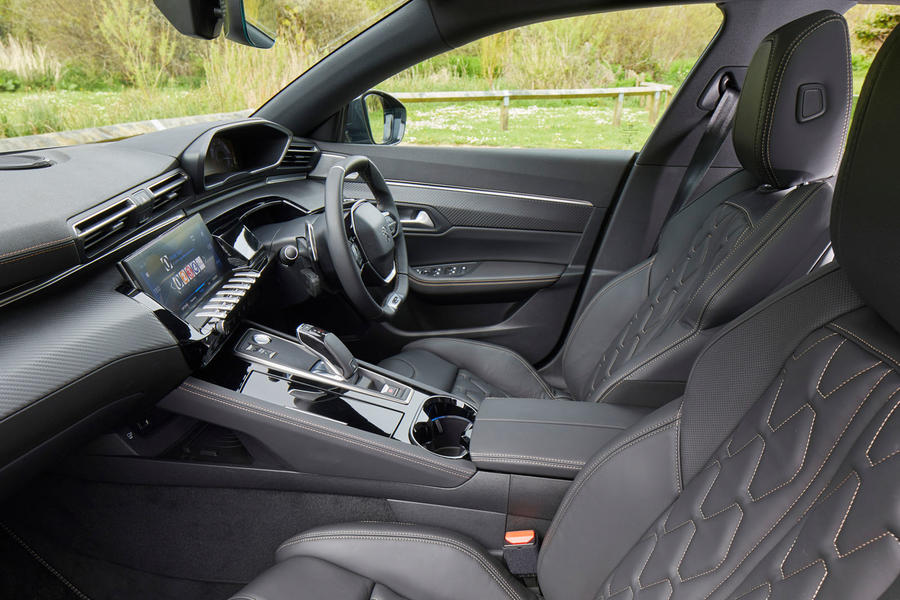 Those already swayed by the 508 saloon’s head-turning styling and tech-laden cabin will find much to like in the SW’s increased load space, but it remains middle of the pack in terms of ride comfort and dynamism.

Adaptive damping only goes so far on both fronts, leaving the talents of the more powerful petrol engine a little underutilised. For a significant portion of customers, we expect the high-end diesel would be the pick of the range. 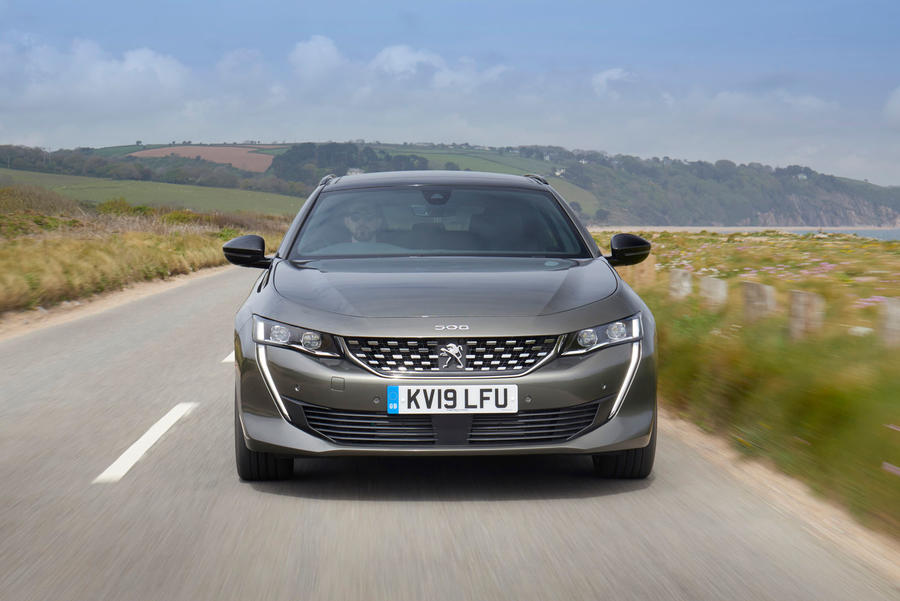 Download mp3. i also love mp3 download and i like getting latest mp3 downloads.. so this is the better part i love to see and i love album zip downloads also in this recent times

this is nice so i download mp3 .. i also love mp3 download and i like getting latest mp3 downloads.. so this is the better part i love to see and i love album zip downloads also in this recent times

this is nice so i download mp3 .. i also love mp3 download and i like getting latest mp3 downloads.. so this is the better part i love to see and i love album zip downloads also in this recent times