The Peugeot 5008, which is no longer a people-mover, as you may have noticed. That may seem odd, considering it’s a car whose reason for being is that it has seven seats, where its sister car, the 3008, does not. Now the 5008 is an SUV – albeit an SUV that won't ever be available with four-wheel drive.

But be that as it may, whichever three letters are used to describe the new 5008’s particular niche, or Peugeot’s reason for repositioning it, what matters is whether this is a good seven-seater. And, after first inspection, we’d say that it is – although perhaps not the very good one they’d have you believe.

The car goes on sale in the UK in June, in a range that mirrors that of the shorter 3008. It will be offered with a choice of petrol turbos engines making between 128bhp and 163bhp, and 99, 118, 148 and 178bhp diesels, most of which can be mated to a choice of six-speed manual or six-speed torque-converter automatic gearboxes. Rated CO2 emissions do a lot to recommend the car and will mitigate the effect of what are likely to be fairly expensive prices when they’re announced later this year for company car drivers. Generous equipment levels will have the same effect, of course. 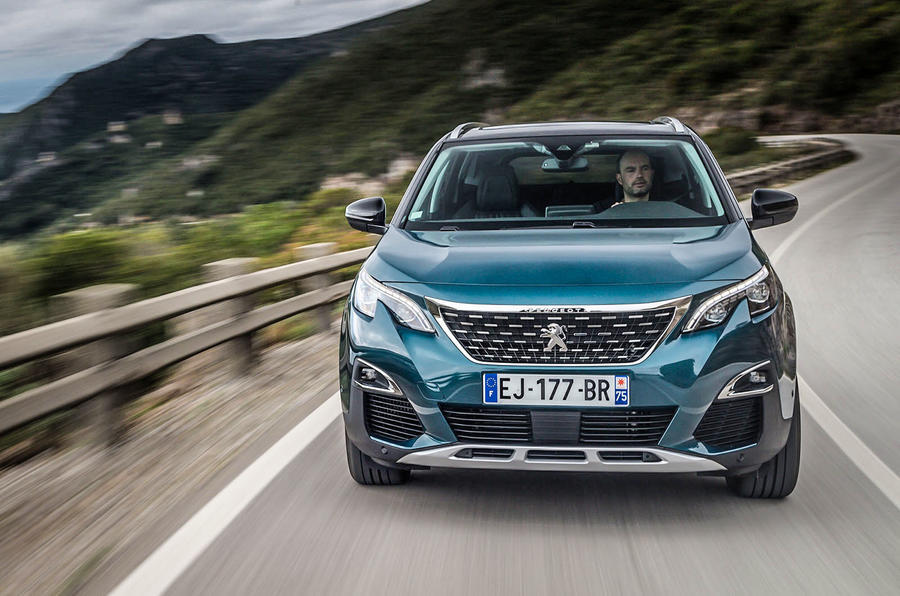 And for anyone disappointed by Peugeot’s decision to leave out a conventional four-wheel drive system here, it makes amends with an option called Advanced Grip Control, which bundles multi-modal traction control and a hill descent control system with Continental ContiCrossContact hybrid on and off-road tyres.

There are clearly bigger and more expensive large family cars you might buy, so the 5008 has to strike a perfect compromise between fairly compact and manageable exterior dimensions and well-packaged occupant space. It does that well enough, with notable strong suits and a few hiccups.

The car has three individual second-row chairs, each offering plenty of leg room on account of the 165mm that has been added to the platform’s wheelbase as part of the 5008’s making. Each chair folds, slides and reclines into various positions, and each has its own ISOFIX child seat anchorages, thumbs up for that. But to sit in, their cushions feel a bit hard, flat, short and slim, and second-row head room is quite poor if you option your car with Peugeot’s panoramic glass sunroof. Avoid that and head room in both the first and second rows is much improved, alhough it’s well worth noting that with top-line GT-trim cars, you’re stuck with glass roof. 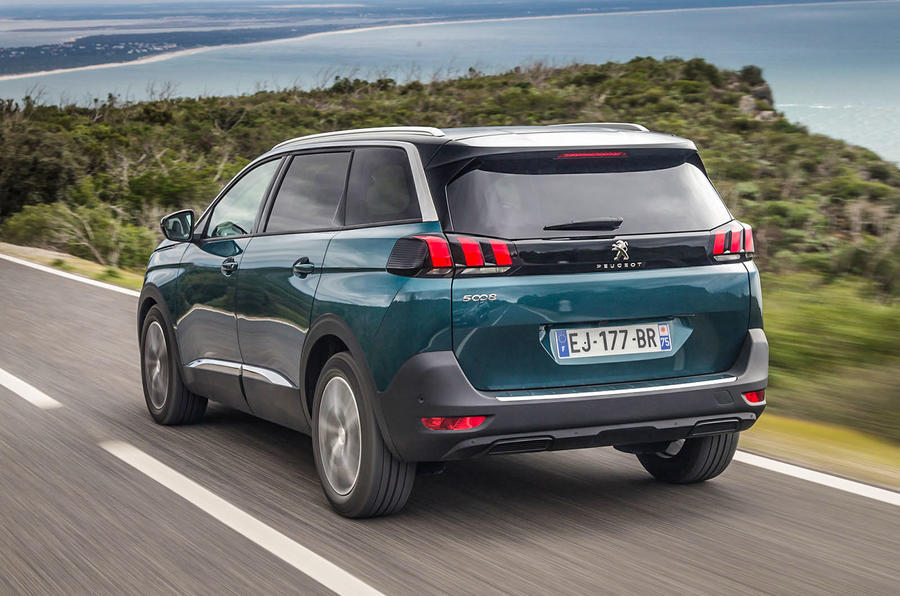 The 5008’s third-row seats aren’t really big enough for adult passengers, but they’re still typically useful for this type of car. On the plus side, they’re easy to fold and can even be removed, liberating up to 1000 litres of boot space behind the second row. In the minus column, those rearmost seats don’t have childseat anchorages and the 5008’s front passenger seat doesn’t either, so carrying a small army of kids in this car might not be as straightforward as it might have been.

The 5008’s driving environment gives with one hand to take away with another, just as the 3008’s does. The fascia is quite striking, stylish, richly finished and apparently well-constructed, while the standard flatscreen digital instruments are definitely a stand-out feature, giving you plenty of choice about what information you want in front of you. The layout of the controls, however – the high seat, downsized and low-sprouting steering wheel, high-set instruments – remains strange and unintuitive even so many years after we first encountered the iCockpit concept on the current 208 supermini. Peugeot’s argument is that its customers love the layout, and that familiarity makes it seem less odd – but it hasn’t yet become that way for us. 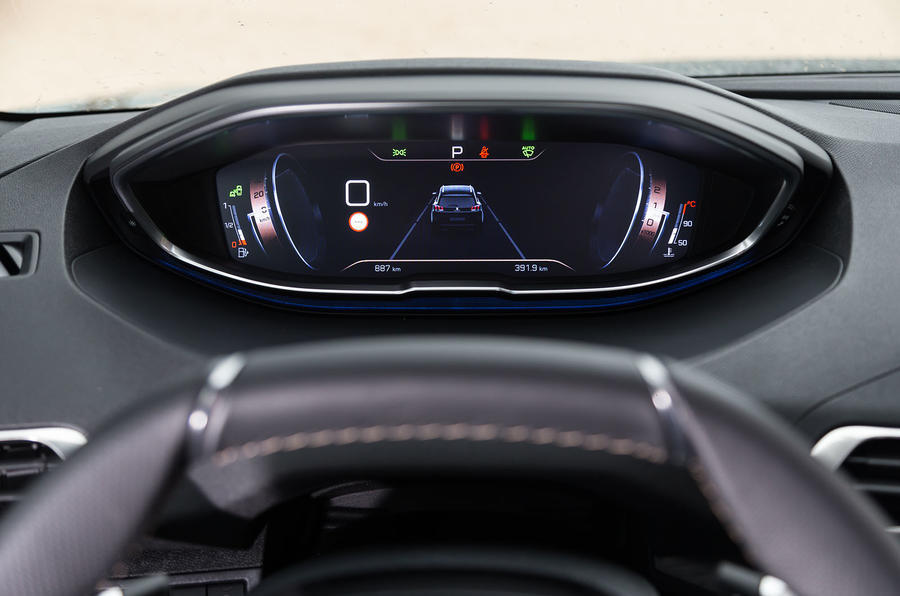 To drive, the 5008 is competent, secure-handling and comfortable for the most part, its suspension settings conferring a fairly gentle, compliant ride when the road surface is good. Over testing undulations, the car’s vertical body control becomes a bit loose and wallowy, while broken, sharp-edged asphalt can bring the occasional thump and crash from the arches. A Nissan X-Trail probably has a broader-based comfort level.

The Nissan’s carefully metered handling and steering would also beat the 5008. The Peugeot's handling is precise enough and well controlled through bends, if a little remote and bothersome thanks to a contrived, over-direct and elastic-feeling steering system, and the wheel becomes overly light and particularly troubling at town speeds.

Peugeot’s 2.0-litre BlueHDi diesel engine seems a good match for the 5008’s mass and has better refinement and tractability than the 1.6 diesel we tested in the new 3008 just a few months ago. The shift quality of the six-speed manual gearbox left a bit to be desired but doesn't prevent the powertrain being pleasant to engage with at all times except when you press the car's obligatory Sport button, which adds uncalled-for speaker-generated noise to the engine's soundtrack and blights the pedal response with over-sensitivity in the first inch or so of travel.

The upper mid-range diesel engine makes for a perfectly decent and mostly competitive overall driving experience from the 5008, although not one that recommends it nearly so well as its smart styling or classy interior.

There are a few too many caveats necessary – no four-wheel drive, flaws in the car’s practicality showing, likely ambitious pricing and slightly muddled and misconceived handling – to be able to recommend this car unconditionally. Still, we can’t deny that the 5008 is one of the more desirable seven-seaters to have come to market lately and, together with the VW Touran, Renault Grand Scenic, Skoda Kodiaq and BMW 2 Series Gran Tourer, it promises to make family life on the road much more pleasant in 2017 than it was just a couple of years ago.

Agree. By all accounts, this seems a pretty $hitty review. To be clear, not the car, for which I'll have to read about in another publication, but the review.
Cleverzippy1 16 February 2017

So you've got the satnav

So you've got the satnav screen up, how do access the temp controls without navigating through a myriad of touchscreen menus and keeping your eyes on the road?
michael knight 16 February 2017

Cleverzippy1 wrote:
So you've got the satnav screen up, how do access the temp controls without navigating through a myriad of touchscreen menus and keeping your eyes on the road?

More clever than the twit who

More clever than the twit who designed this. You still have to reach down to select the right menu and then reach up to select the desired temp. What's wrong with simple rotary controls? Technology for technology's sake.
catnip 18 February 2017

Cleverzippy1 wrote:
More clever than the twit who designed this. You still have to reach down to select the right menu and then reach up to select the desired temp. What's wrong with simple rotary controls? Technology for technology's sake.

Yes, and try that on a bumpy road. I'm not the VW group's greatest fan but I was pleased to read a comment from Seat's interior designer saying that climate controls don't belong on a touchscreen. The traditional 3 dial rotary control set up can't be beaten for ease of operation and therefore safety.
Marv 16 February 2017

Does it bode well for Vauxhall's Grandland X?

Hi Matt, since the Grandland X is going to be based on this platform (not sure how much the Vxl/Opel engineers will change) do you think it bodes well as a product for Vauxhall and the buyers they appear to be targeting?
View all comments (8)