From £18,1908
Mini did a superb job with its latest hatchback, but will removing the roof ruin things? We drive the latest Convertible on US roads to find out
Open gallery
Close

Imbued with the latest Mini styling cues, the third-generation of the modern day Convertible boasts an instantly familiar but arguably more mature appearance than the model it replaces. It’s a much more confident looking car with an improved stance, especially on the optional 205/45 R17 tyres worn by our test car.

Along with the more contemporary appearance, there’s also a newly developed fully-electric cloth hood, which opens in 18 seconds at speeds of up to 19mph. As before, the multi-layer structure folds and stows in an exposed position above the boot at the press of a button, heavily obscuring visibility to the rear when opened. With integral header rails, it also features a sliding function that allows you to semi-erect the roof when you don’t want the full alfresco experience.

Among the safety enhancements that compensate for the lack of a fixed roof are a reinforced windscreen frame, roll bars that extend from behind the rear seats when sensors detect a possible rollover, more substantial strut braces across the suspension towers front and rear and stiffing within the sills.

The larger dimensions bring added versatility to the interior. Climb in and you discover an overall increase in space up front. It remains snug, but there’s noticeably more shoulder room and larger footwells than before. It’s in the rear, though, that the more significant increase in accommodation has taken place, the width of the rear seat having increased by 34mm and, crucially, there is now an added 36mm of leg room.

Luggage carrying capacity, never one of the Mini Convertible’s great strengths, has also increased by 35 litres to a larger-than-ever 215 litres with the roof in place and 160 litres with it lowered. As before, the rear seats receive standard split-folding backrests, but the inherent properties of the high-strength steel UKL platform, including a stiffer rear bulkhead, allow for an 8mm wider through-loading facility for easier stowage of longer items.

Given how aggressively it is marketed at the lifestyle set, you would be forgiven for not taking the Mini Convertible that seriously, but it is also a highly engaging car to drive in the right conditions.

The adoption of the larger turbocharged 2.0-litre four-cylinder provides the Convertible Cooper S with an additional 9bhp and 20Nm, which hardly sounds like much until you drive it. Along with the subtle increase in overall power and torque, the new powerplant also provides a noticeable improvement in tractability and refinement over its predecessor, a smaller turbocharged 1.6-litre four-cylinder unit.

Whether tooling around town or charging along deserted country roads, you’re aware of the increase in performance. There is enhanced response and urgency at low revs along with stronger flexibility and vigour through the mid-range.

This new engine is also significantly smoother and pulls to its 6300rpm ignition cut out with a great deal of verve on a loaded throttle, providing the new open top with a fittingly zesty on-road character. Additionally, it boasts a sweeter exhaust note with less induction blare and a more alluring timbre that builds in intensity as the revs rise but is never overbearing.

The new Mini feels every bit as quick as its official 0-62mph time of 7.2 seconds suggests, offering up sharp off the line acceleration with significantly less torque steer than the old model.

The standard six-speed manual gearbox uses less forceful springing and slightly shorter longitudinal travel than before, allowing you to confidently guide its rather long lever between the closely stacked gates with ease even at high engine loads. The blip function negates the need for heel and toe downshifts, allowing you to rush up to a corner before grabbing a lower gear – at which the electronics automatically provide a blip of the throttle to settle the car upon turn in.

Dynamically, there’s a lot to like about the Convertible Cooper S. The chassis receives its own unique tuning with individual spring and damper settings. Our test car also featured the optional Mini driving modes, which provide the choice between Sport, Mid and Green modes for steering and throttle mapping, as well as sports suspension with dynamic damper control.

Around town it is nippy and highly manoeuvrable. Press on along more challenging roads and it proves highly capable with impressive grip and outstanding balance. Its breadth of abilities has clearly improved, making it a more rounded and desirable car than ever before.

The electro-mechanical steering is light and quite responsive at lower speeds, and it weights up well and provides a nice direct feel off centre. There’s a hint of body roll in tighter corners, but it is nicely controlled and never builds to uncomfortable levels, making the new Mini a real joy to hustle along. There is some odd steering bump and torque steer to contend with when you’re really on it, although it is never short of charisma or involvement.

Being fairly limited on suspension travel the ride sometimes becomes a little harsh and can lack small bump compliance when you’re running in Sport mode. But select Comfort and you experience greater absorbency and, thanks in part to the longer wheelbase, an altogether calmer feel to its progress.

This all makes the new Convertible a much more convincing proposition and a lot less wearing to drive than its predecessor over longer distances. It’s not really a car for intercontinental journeys, but you can now jump in and drive it for hours on end without any concerns about its overall refinement.

Happily, the effects of scuttle shake are rarely felt. A small degree of flex and the odd tremor through the body is evident over nasty transverse ruts. On the whole, though, the open top Mini feels taut and well braced by open top standards. Wind buffeting is also well controlled when running roof down and there is noticeably less suspension noise over pockmarked roads. 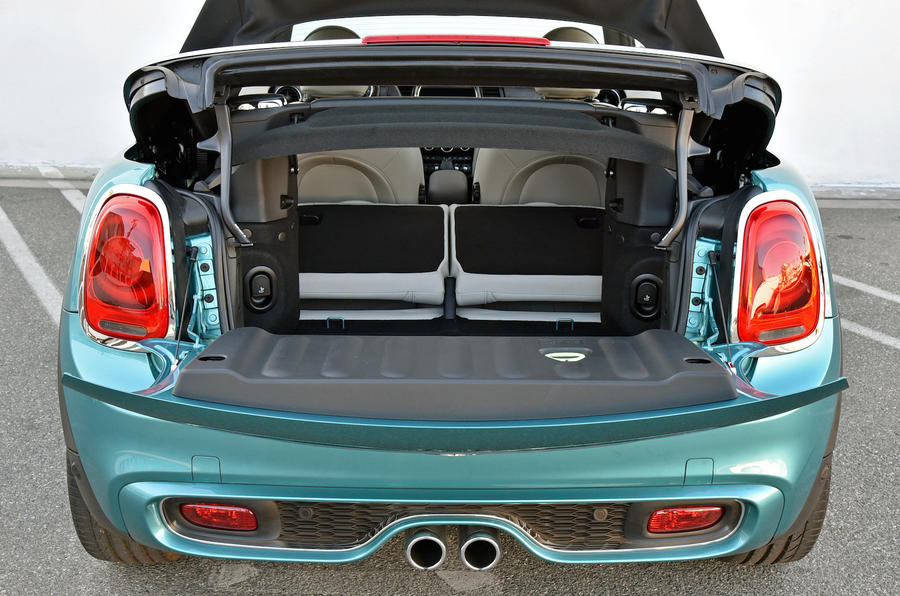 Mini has done an excellent job in turning its third-generation three-door hatchback into a fast and engaging two-door convertible. Reservations about the quality of some of its interior fittings aside, it is a significant advance on its popular predecessor, sales of which reached 165,700 in the six years it was on sale. But with a price that is £3590 more than its hard-top sibling, its ability to go topless comes with a handsome premium.

As well as providing smoother and more urgent performance qualities, the new open-top Mini also boasts enhanced handling and overall refinement. It may be pitched more at those more concerned with their particular lifestyle than outright driving qualities, but it manages to cater to both in equal measure. 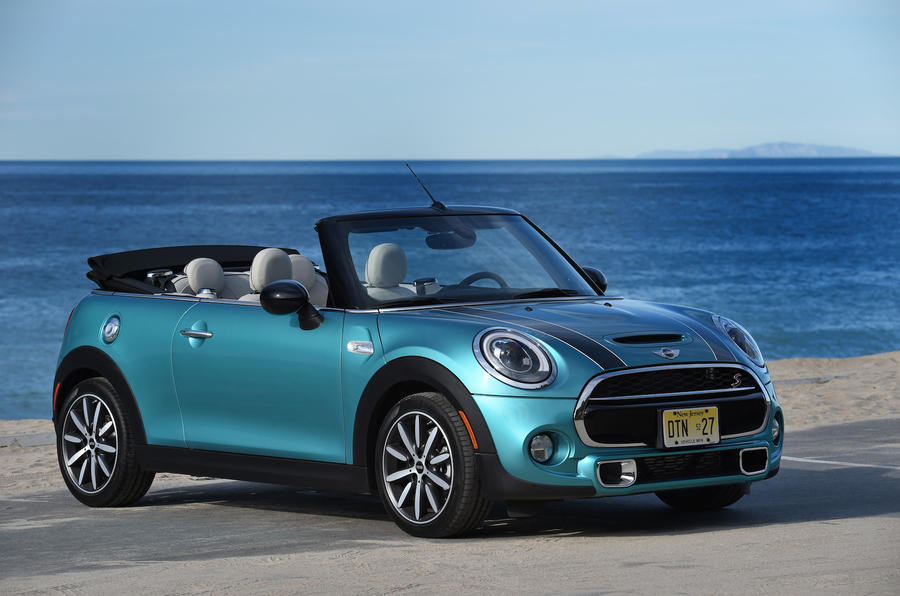 Based around parent company BMW’s versatile UKL platform, as used beneath all of Mini’s more recent models, the new Convertible also has a 28mm longer wheelbase, at 2429mm, along with tracks that are up by 42mm in length at the front and 34mm at the rear – all of which gives the car a much larger footprint than ever before.
unquote................ so excuse me for asking Sir Issi would be scared to death looking at this jumbo jet. If you want SMALL as in MINI dont buy one - Toyota IQ or Smart or Kia all have MINI's
Will86 17 February 2016

Is it worth the extra?

My parents have a 2015 Cooper with the panoramic sunroof. Open the roof and drop the windows and you get a surprisingly open air experience. Ok its not as alfresco as the Convertible, but its £3k less and comes with fewer compromises.
StuM82 17 February 2016

How come this has the same number plate as the M2 you reviewed, Autocar?
View all comments (6)