The changes lower down the model range are more modest, focused on sharpening the car's showroom appeal with some well-chosen cosmetic tweaks inside and out, plus some extra equipment and some choice options.

Even so, you’ll have to be a keen Clubman fan to notice the changes here, which include a larger and more cohesive one-piece grille, reprofiled bumpers, subtly tweaked door mirrors, LED foglights complete with distinctive halo running light surrounds and the natty Union Flag LED tail-lights. That’s about it, apart from some new paint colours and new alloy wheel designs; our Exclusive test car - there are also Classic and Sport trims -  was fitted with some rather attractive 18in rims.

Overall, the Clubman is still a slightly blobby and awkward shape, but it looks classier and more resolved in this standard guise than as the slightly try-hard JCW.

Inside, it’s pretty much as before. There are some new trim materials and the option of more chest-beating Union Flaggery, this time stitched into the headrests, but it will be familiar in all other respects to owners of the older car. On the plus side, that means it all looks rather good and the sense of solidity and quality is hard to fault.

And while the Clubman isn't the most spacious family hatchback, there’s enough room for most and those novel tailgate doors open to reveal a fairly useful 360-litre boot.

Of course, the ability to personalise your Clubman is seemingly endless, so it’s no surprise to find there are now a few more options. Not only are there the aforementioned wheels and paints but also a number of exotic leather trim finishes, plus adaptive matrix LED headlights are now available for the first time. As ever, it’s possible to get extremely carried away; our seemingly lightly optioned car's list price had ballooned from £24,850 to nearly £35,000. Yikes.

Under the skin, the Clubman is largely unchanged, with the Cooper essentially getting the same 134bhp turbocharged 1.5-litre three-cylinder petrol engine as before. As standard, this drives the front wheels through a six-speed manual gearbox, but our car had the optional seven-speed dual-clutch automatic. 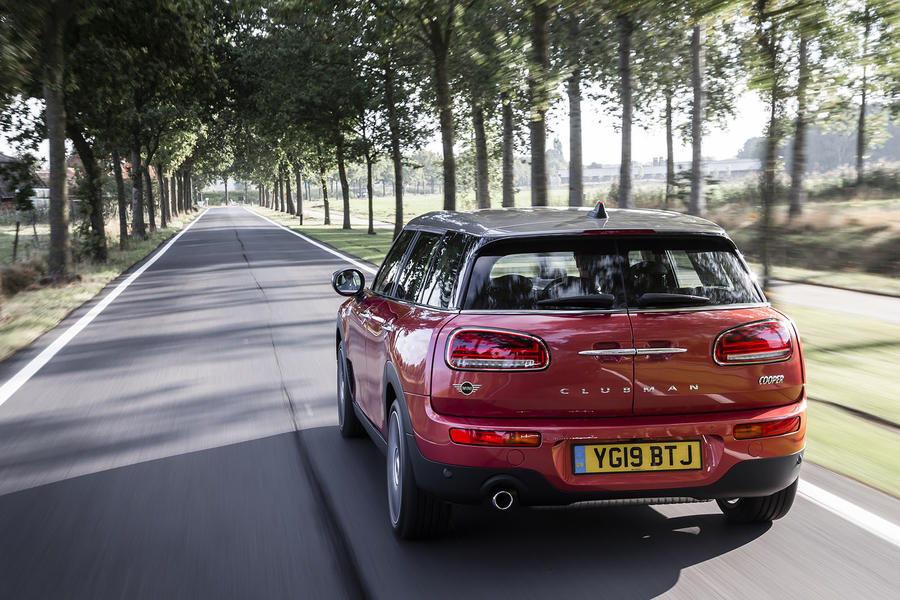 It seems unkind to say it, but if you’ve driven the previous Clubman, there will be no surprises here. This is still a car that doesn’t quite fit into the traditional C-segment family hatchback mould, aiming to be a stylish and fun alternative to mainstream models, and in some respects it achieves that. Perhaps more pertinently, it’s the relatively modestly engined Cooper that proves itself to be the sweetest model in the line-up.

Despite the sporting connotations of the Cooper name, it's no fireball, being brisk rather than quick. Its three-cylinder engine revs a little lazily, but it’s smooth enough and emits a pleasant growl when extended, plus there’s a decent seam of low-down torque that allows the gearbox to short-shift up the ratios yet still make decent progress.

However, the DCT is a mixed bag. It can get a little wrong-footed at low speed, jerkily shifting between ratios as you pull out of a junction or onto a roundabout. It’s quick and slick the rest of the time, while manual changes are operated the ‘right’ way around - pull the lever towards you for upshifts and push away for downshifts, motorsport style. The latter action also gives you a nice throttle blip to smooth progress.

The Clubman drives much as before in the corners, which isn't surprising, given no changes have been made to the chassis. The steering is quick and meatily weighted but suffers from some kickback and the merest hint of torque steer. Still, the car turns in quickly and feels like it wants to rotate around your hips, with the rear axle keen to share the load. You’re aware of the mass, however, and it’s not long before the tyres start squealing and the front edges wide – although breakaway is progressive and the nose can be brought back into line with a small lift of the throttle.

This isn't a car that flows through corners like, say, the Golf or Ford Focus. It feels flightier than that, with the darty steering and firm suspension delivering a more hyperactive driving experience, as if it’s trying to hard to prove it’s a Mini at heart. Still, if you’re in the mood and the road is right, there is some fun to be had.

The ride is no better than before, certainly on 18in wheels, fidgeting and hopping over poorly surfaced roads, with the suspension occasionally getting thuddingly vocal over really broken asphalt. On the plus side, it settles down on smoothly surfaced motorways, while refinement is pretty good, with low levels of wind and mechanical noise. 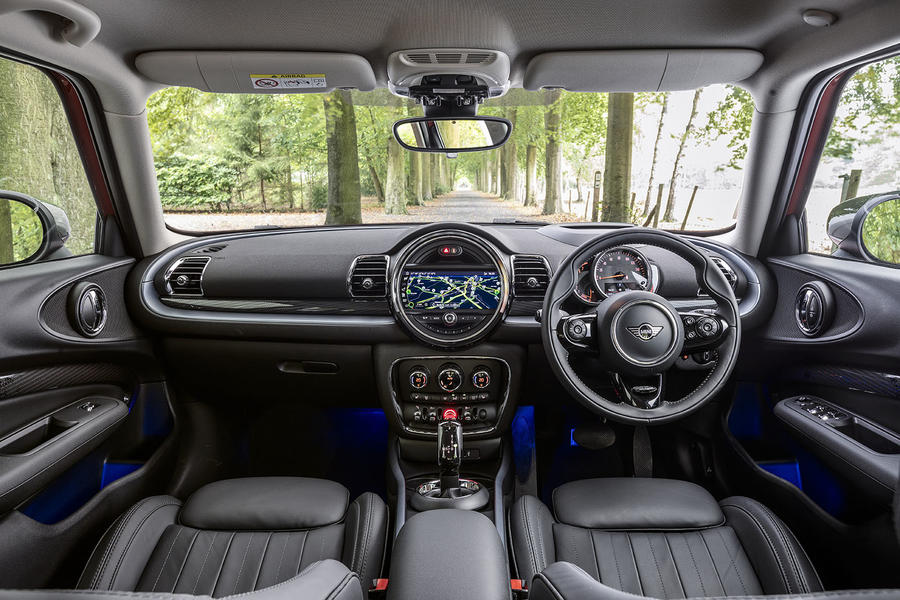 If you weren’t going to buy the previous version of the Clubman, there’s nothing here that’s likely to persuade you to change your mind. Not only does it lack the practicality of the Golf but also that car’s all-round polish and poise.

Yet a Mini isn’t a car you buy with your head, and for some the Clubman’s combination of character, style and endless personalisation options, all with a sprinkling of family-friendly versatility, will be enough to seal the deal. And if you do want to take the plunge, the Cooper’s reasonable price (before options) and more rounded dynamics make it the pick of the range. 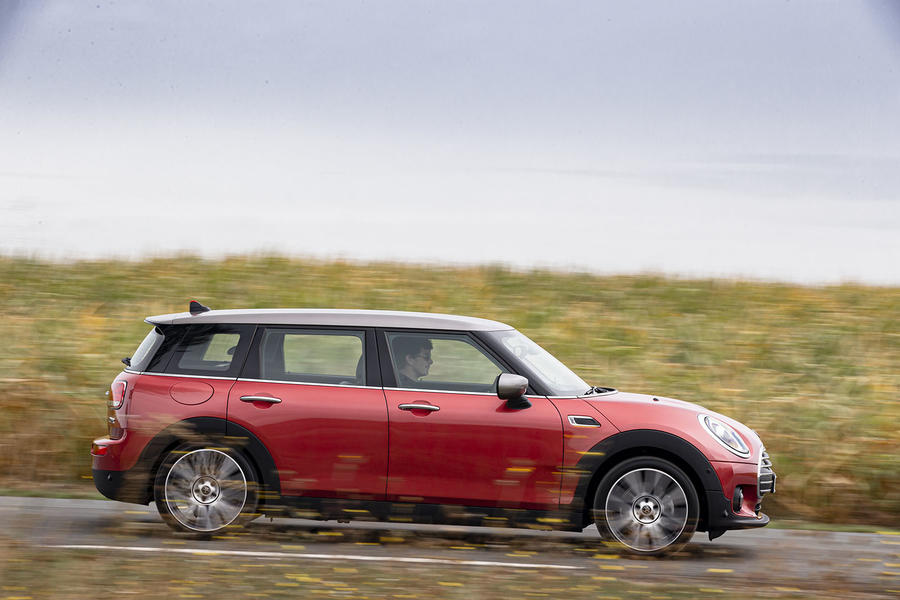 When is Autocar going to sort out its comments section. Load of spam on here. Get rid.

When is Autocar going to sort out its comments section. Load of spam on here. Get rid.

I'm not sure I'd call the new

I'm not sure I'd call the new grille more cohesive, but I think the union flag rear lights work better here than on the less subtle MINI hatch. I probably wouldn't buy one, but I'm glad this Clubman exists: It makes the motoring landscape more interesting, rather than everyone just buying another Golf or SUV.

Yes, there's now an unfortunate bit of a wide-mouthed frog about the front of the car now!

Yes, there's now an unfortunate bit of a wide-mouthed frog about the front of the car now!

...they make the frog look as though someone's 'gone in dry'.

One wonders who signs these things off.