From £23,6507
It may be surefooted, but we find it hard to recommend the Mini Cooper S Clubman All4 over its front-wheel-drive sibling
Open gallery
Close

The Mini may not have pioneered front-wheel drive, but it has long been associated with that layout. A compact A-series engine stuffed sideways into the nose of the little Austin gave plenty of space in the cabin and predictable handling to boot.

Of course, the introduction of the controversial Mini Countryman (ignoring the wacky twin-engined Mini Mokes of the past) changed that with the introduction of optional four-wheel drive. You can now add another model to the all-paw family: the Mini Clubman.

Only available on Cooper S and Cooper SD models, the car remains front-driven most of the time, only sending power to the rear wheels in certain situations. It isn’t just a reactive system, though; the Clubman can predict when drive is needed at the back and push it rearwards before there’s any slip from the front. 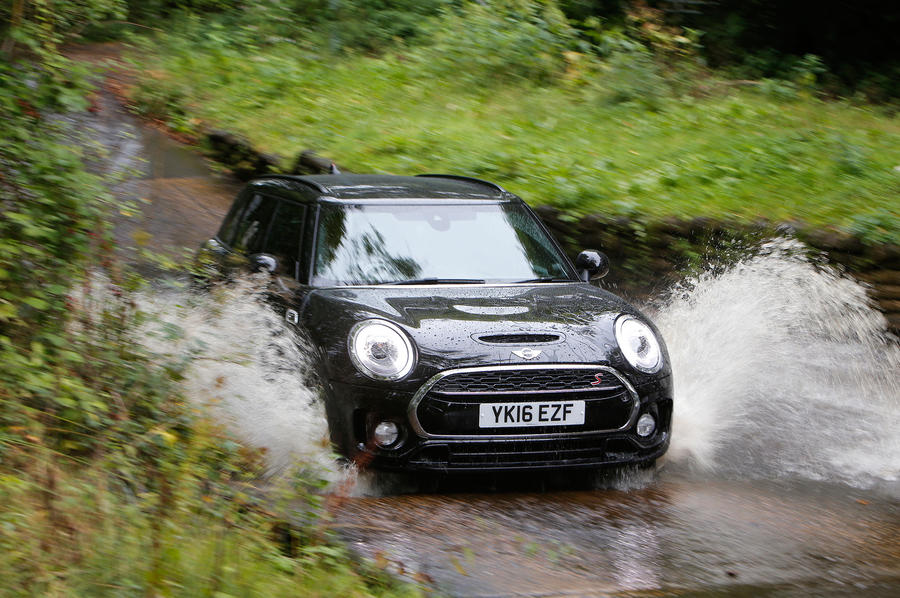 We’ve already tried the diesel abroad, but here we’ve got the petrol Cooper S on UK roads. Under the bonnet is the same 189bhp turbocharged 2.0-litre motor that you get in the regular Cooper S. Thanks to the four-wheel drive, it’s quicker from 0-62mph by 0.2sec.

Typically, it remained largely dry during our time with the car, so we can’t comment on how it deals with particularly slippery roads. What we can say is that pulling out of damp junctions can be done confidently and without drama.

In this situation, you can certainly feel the back axle getting stuck in to keep the Clubman feeling neutral. It’s the same story when accelerating out of slower corners, the car resisting power understeer better than an equivalent front-driver. 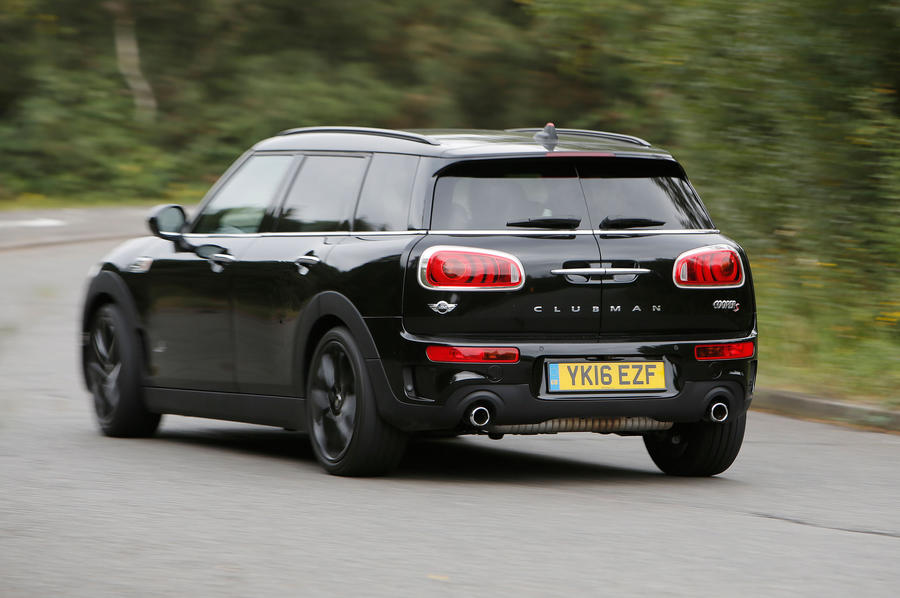 Does this make it more involving or exciting? No. Even with all of the electronics off, a neutral cornering attitude is the best you can hope for under power. For the most part, though, it feels much the same as a normal Clubman, with quick – if largely numb - steering with decent weighting and a ride that copes with B-roads well.

Although big bumps can sometimes catch it out, the Clubman exhibits good body control with an ability to smooth out the majority of scarred surfaces. You’ll still feel the topography of the road, but it’s rarely uncomfortable.

The engine gets the Clubman up to speed effectively, delivering a pleasant rasp in the process. It isn’t the kind of unit that you’ll savour every last rev with, however, and we’d argue that a little bit more power wouldn’t hurt, either. 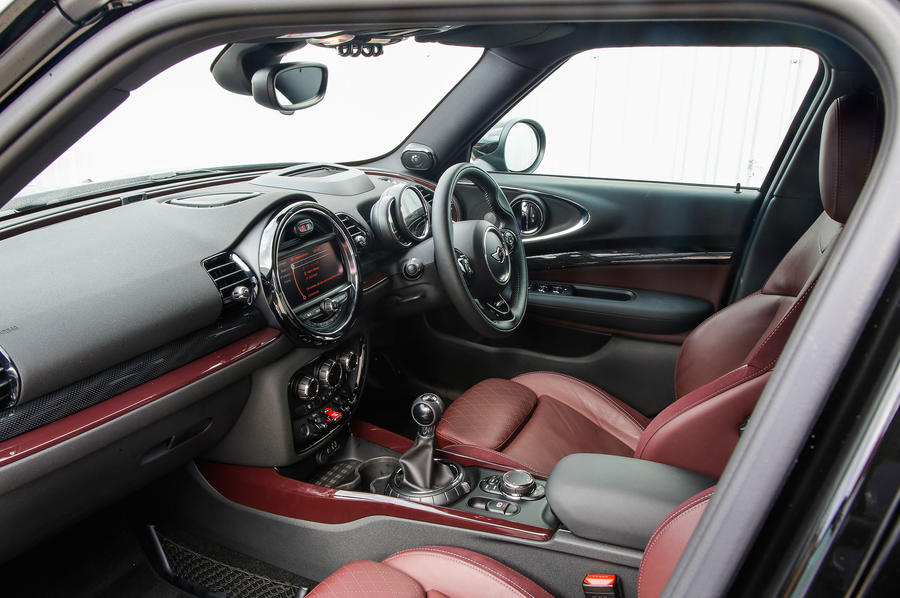 A six-speed manual gearbox is standard and, while not intrusive, is a little rubbery when compared to the best stick shifts out there. If you don't want to change gears yourself, there’s an optional eight-speed automatic that improves performance, emissions and fuel economy.

Ah yes, emissions and economy. The additional weight and resistance of the prop, rear diff and other assorted oily bits adds 15g/km of CO2 and worsens fuel economy by nearly 5mpg. At least boot capacity doesn’t take a hit.

The interior feels of high quality and is certainly funkier than the equivalent Audi or BMW. It’s comfy, too, although there is a lot of road noise and a fair bit of wind noise around the windscreen and A-pillars. 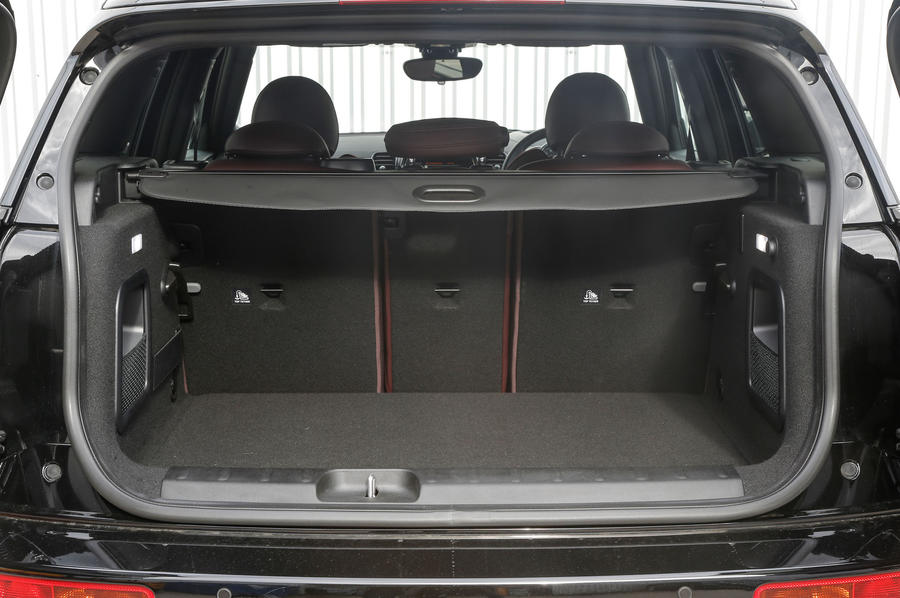 Overall, our verdict may prove to be a familiar one when it comes to mass-market front-drive cars converted to drive all four wheels. There’s no doubting the worth of the additional traction if you live in the outer reaches of Scotland or down the end of a muddy farm track, but how many people that actually do see a Mini Clubman as a viable choice?

The problem is that for most people, a wet road or occasional grass car park will be the most treacherous terrain they are likely to encounter. Yes, there is more traction in bad weather, but it doesn’t justify the higher list price, more expensive tax and poorer fuel economy.

If you’re tempted by a Clubman – and we can certainly see the appeal – ask yourself if you really need the All4. If it could get you out of a sticky situation on a regular basis, then we see the point; if not, stick to the two-wheel-drive car.

Seriously... when is someone going to call them out on this.

Why is a big car called a Mini?

Seriously... when is someone going to call them out on this.

Why is a big car called a Mini?

Below the recent review of a different variant I posed the question of whether given the name it would be a good idea for them to make a small one.

Several years ago I was following a Mini across the Kessock Bridge and was struck by the fact that its rear view seemed noticeably bigger than the hatchback in the lane alongside it, a Toyota Corolla I think it was. And they've only grown larger since. Perhaps Maxi would have been a more appropriate name to revive.

I'm sure they're a good quality car, they're not bad looking (though the first (of the modern versions) was better) and they have a reputation for holding their value, but it's too big to qualify as a small car, and the practicality is uncompetitive against medium hatchbacks.

I'd see it as a better option, and a true successor to the original, if it were a little smaller than an Aygo.

"Under the bonnet is the same 189bhp turbocharged 2.0-litre motor that you get in the regular Cooper S. "

Don't you mean the *standard* or *normal* Cooper S?

"Under the bonnet is the same 189bhp turbocharged 2.0-litre motor that you get in the regular Cooper S. "

Don't you mean the *standard* or *normal* Cooper S?