The original Mercedes-Benz GLA was an undoubted success from its launch in 2014, with sales that touched the one million mark worldwide. But with all the marketing nonsense that surrounded it stripped away, the high-riding hatchback was in essence not much more than a rebodied version of the third-generation A-Class, and the claim to it being a genuine crossover was somewhat empty in terms of pure function.

This new one is different – and all the better for it. Developed as part of an eight-strong Mercedes compact car line-up, it has been given the necessary design and engineering scope to evolve into a much more rounded and talented rival to the Audi Q2 and BMW X2.

While the mechanical similarities to its lower-riding sibling remain, a whole host of unique touches help not only to provide the second-generation GLA with a more standalone character but also to instil it with the inherent qualities to make it more appealing on many fronts. Before we get into the finer points of the way it drives, though, we should consider its altered form.

Styling is always subjective, so we’ll sidestep judgement on the new GLA’s bolder appearance. What you should know, however, is that its dimensions have changed: length has been reduced by 14mm to 4410mm, while width extends by 30mm to 1834mm and height is up by a considerable 104mm at 1611mm without the optional roof rails. By comparison, the Q2 measures 4191mm long, 1794mm wide and 1508mm high, while the BMW X2 stretches to a respective 4360mm, 1824mm and 1526mm.

Don’t think the reduction in length has greatly reduced its versatility, though. With a 30mm-longer wheelbase at 2729mm, its interior has actually grown in size, notably in the rear, where it’s now considerably roomier than before.

At its launch, the new GLA will be offered with two different four-cylinder petrol and a single four-cylinder diesel engine across seven different models, although not all are planned for sale in the UK.

The entry point is the front wheel-drive GLA 200, which uses a turbocharged 1.3-litre petrol unit sourced from Renault and delivering 161bhp and 184lb ft. It’s joined by the initial range-topping GLA 250, in front- and four-wheel-drive guises with a turbocharged 2.0-litre petrol engine making 222bhp and 258lb ft. 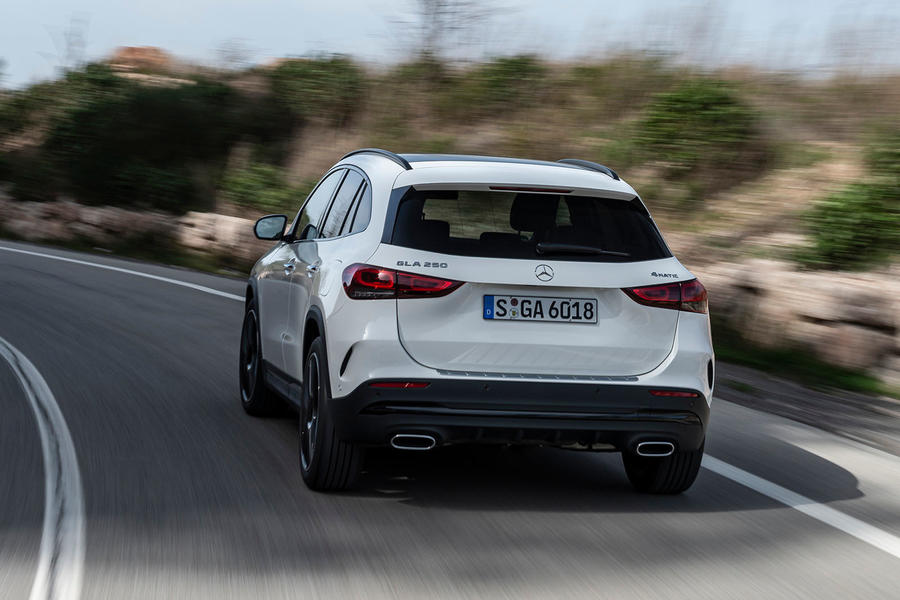 It’s the top-of-the-line GLA 250 4Matic we’re in here, and the similarities to other recent new Mercedes models can’t be denied. Inside, the dashboard, controls and free-standing digital display will be familiar to anyone who has set foot in the latest A-Class hatchback, A-Class Saloon, B-Class, CLA, CLA Shooting Brake or GLB.

Our highly equipped test car featured optional 10.2in twin displays along with a multicolour head-up display unit in place of the pair of standard 7.0in displays, giving it a rather upmarket air that’s further accentuated by Mercedes’ latest multi-function steering wheel and lots of brushed aluminium-look trim.

So configured, it’s all fittingly premium in look and feel, and with the latest in conversational voice recognition and touchscreen functions within easy reach of the steering wheel, it’s quite intuitive, too. The response from the infotainment system and MBUX operating system is particularly impressive, making it easy to set commands on the go.

Befitting the GLA’s crossover positioning, its front seats are mounted 140mm higher than those in the A-Class hatchback. In combination with its increased ride height, this provides the GLA with a more commanding driving position. The added height within the body also brings a 22mm increase in front head room compared with the first-generation model. It’s an agreeably airy and relatively spacious driving environment by class standards.

The rear gets a fixed seat as standard but, as with the latest B-Class and the new GLB, there’s an optional bench with 140mm of fore and aft adjustment and, crucially, 116mm more rear leg room than before. Longer door apertures with less intrusion from the rear wheels arches also ease entry to the second row, although rear head room has been reduced by 6mm, due to the new GLA’s more heavily sloping roofline.

Despite the decrease in overall length, Mercedes has managed to squeeze an extra 14 litres of load volume into the boot, which, with a capacity of 435 litres, now offers 30 litres more than the Q2 but still 35 litres less than the X2. 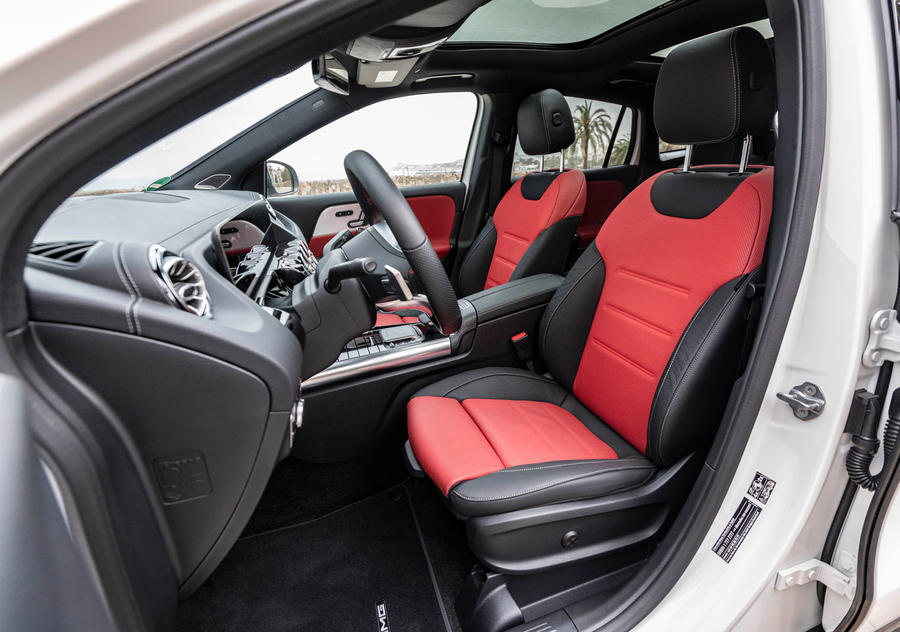 Out on the road, the GLA 250’s engine provides solid performance. It never feels quite as refined as the 2.0 TSI unit used by the Q2 nor as smooth in nature as the engine that powers the X2 xDrive20i. But with little obvious lag and a good deal of low-end torque, it endows the junior Mercedes crossover with purposeful off-the-line and midrange acceleration, as reflected in its claimed 0-62mph time of 6.7sec.

Scrolling through the various driving modes alters the acoustic qualities quite markedly. In Comfort, the exhaust note is nicely subdued and distanced from the cabin. Switch into Sport, though, and it becomes instantly more determined in nature, with a raspy timbre under load and the odd crackle on a trailing throttle serving to engage enthusiast drivers.

The action of the gearbox, which can be controlled via steering wheel-mounted shift paddles, is quite decisive on upshifts. However, it’s sometimes caught out as you step off the throttle in automatic mode, leading to the odd less-than-smooth downshift as you brake to a halt for traffic lights. With quite long gearing, it also helps endow the GLA 250 4Matic with a reasonable, if not outstanding, combined fuel economy figure of 40.9mpg.

It’s the chassis and the improvements that Mercedes’ engineers have brought to the ride and handling that really stand out, though. The basis for this is the updated MFA platform, which brings increased rigidity and stiffness, as well as a decision to provide all new GLA models with a suspension featuring a combination of MacPherson struts up front and multi-links at the rear, together with optional adaptive damping control.

Along with the 30mm increase in the wheelbase, the tracks have also been widened by 36mm at the front and 46mm at the rear, giving the new GLA a larger footprint than its predecessor and, in combination with increased volume to the wheel houses, the ability to offer a wider range of alloy wheel sizes, from the standard 17in up to 20in.

To this, the GLA 250 4Matic adds a reworked multi-plate-clutch four-wheel drive system with electromechanical instead of the earlier hydraulic operation, as well as fully variable apportioning of power to each axle depending on prevailing grip levels. In Comfort and Eco modes, the drive is distributed in a nominal 80% front, 20% rear split, while in Sport mode it’s set up to deliver a more rear-biased (30% front, 70% rear) apportioning of drive. In Off-road mode, it offers and evenly balanced 50/50 front/rear split.

The on-road character alters quite a bit depending on the driving mode, giving the new GLA a broader range of qualities than before and the sort of cross-market appeal it is going to need to launch a greater challenge to its premium-brand rivals.

The weighting of the electromechanical steering is quite light, but there’s precision to its action, even if it fails to impart much in the way of genuine road feel. Despite its raised ride height, the GLA 250 4Matic also manages fine body control and engaging agility. Quick directional changes are met with progressive movements and excellent levels of grip. There’s a sheer ease to the driving that makes it very appealing from an everyday point of view.

With a good degree of spring travel and the optional adaptive damping the ride is fairly compliant, even with the largest wheel choice and 225/45 R20 Bridgestone Alenza tyres of our test car. Road noise is also well isolated from the cabin. In fact, overall refinement has been greatly improved, making for more enjoyable long-distance travel.

The G in the GLA name stands for the German word Gelände, meaning terrain. And having experienced the new GLA away from the bitumen, we can vouch for the limited off-road qualities of 4Matic models, which come as standard with a so-called Off-Road Engineering Package.

The new GLA model is never going to take you deep into the jungle or the desert without the benefit of proper off-road tyres and mechanical differential locks, but the ability of its reworked four-wheel drive system to vary the amount of drive to each axle, together with a downhill speed regulation, a unique Off-road mode that alters the intervention of the anti-lock braking system, multibeam LED headlights with an integrated off-road function and a moderate amount of ground clearance, does help it go places few prospective owners are ever likely to consider. 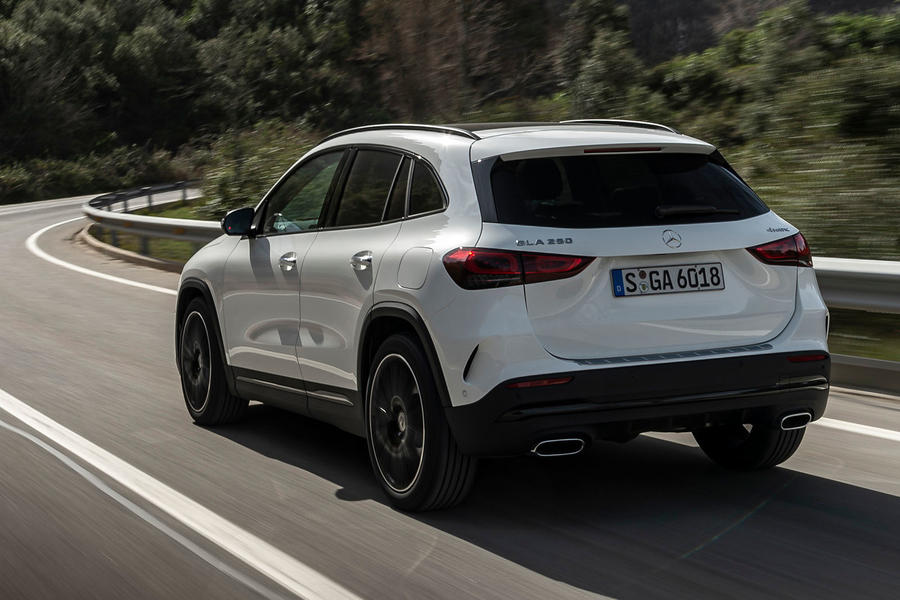 Mercedes must be complimented on the new GLA. It’s a far more rounded and complete car than its predecessor, with greater dynamism and maturity to the way it drives, a considerably richer and roomier interior and improved levels of versatility and quality throughout.

However, we suspect the ownership experience will hinge greatly on the drivetrain. In fourwheel-drive GLA 250 guise, it’s convincingly powerful and punchy, with distinct sporting qualities. But we’ll need to spend time in more affordable front-wheel-drive models before we can say if the new GLA has truly hit the target. 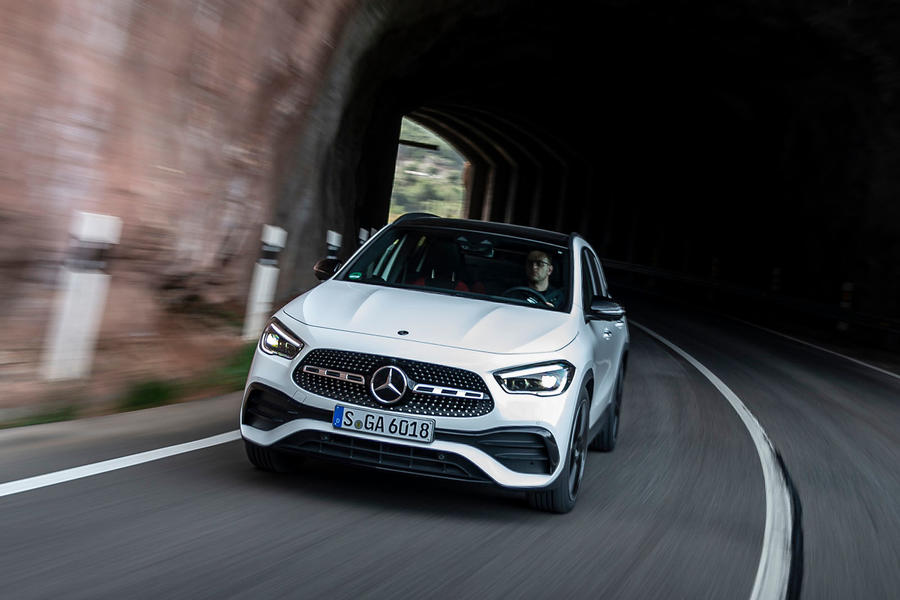 It's a slow thinker, a slow mover and a dead beat brain. Waiting for the usual tripe regarding, why didn't they build this model this way from the beginning?. What a FOOL you are. Fool.

It's a slow thinker, a slow mover and a dead beat brain. Waiting for the usual tripe regarding, why didn't they build this model this way from the beginning?. What a FOOL you are. Fool.

I hope you get banned. You are nothing but a troll.

I was rather hoping the shit

15 April 2020
I was rather hoping the shit stain was dead, unfortunately not.

15 April 2020
The Q3 is a handsome car, but interior quality really has taken at least one step back from the first gen. The X2 just looks awful, especially the rear lights and the naff plastic cladding.
Between this and an XC40 i think i'd prefer the more classic/ subdued looks of the Volvo, but I can see this selling like hotcakes. That interior really is a standout ( For now. Apparently pretty much everybody else is coming up with something way too similar in the next couple of years. Another win for the Volvo imo )

15 April 2020
So is this not an X1/Q3/Ateca/Tiguan/E pace/XC40 competitor , all of which appear to be larger and more practical . Why pick the less practical sister cars of some these cars to compare it to? Having said its sometimes difficult to know .

The first gen GLA was a

The first gen GLA was a horrid thing but bafflingly popular. But - as with the A class - Mercedes seems to have turned it into something quite nice and desirable.

What about the Xceed

15 April 2020
I know the KIA is not 'premium' but surely worth a mention amongst the Q2 and especially the X2. Maybe not with this engine but the smaller engine definitely worth a comparison with. The equipment and build quality far Xceed the others