From £35,2058
Sleek new E-Class Coupé delivers in spades on refinement, equipment and luxury, if not quite so much on outright agility
Open gallery
Close

This is the new Mercedes-Benz E-Class Coupé, which sits between the smaller C-Class Coupé and larger S-Class Coupé. Far more than just a rehash of its seven-year-old predecessor, this new sleek two-door has been thoroughly engineered in a move that closely aligns it with the latest E-Class saloon, both structurally and mechanically.

Gone is the old C-Class platform that underpinned the previous E-Class Coupé. It has been replaced by Mercedes-Benz’s new MRA (modular rear architecture) platform, which brings about an increase in dimensions; length has increased by 123mm up to a total of 4826mm, width has extended by 74mm to 1860mm and, with the standard steel suspension, ride height has also increased by 32mm to 1430mm.

In a move that also endows it with greater levels of interior space, the E-Class Coupé’s wheelbase has also been extended by 113mm at 2873mm, while the front and rear tracks are up by 67mm and 68mm respectively, at 1605mm and 1609mm, over the old model, giving it a substantially larger footprint than before.

The new E-Class Coupé is offered with three engine choices in the UK, with one diesel and two petrol units ranging in power from 191bhp to 328bhp. The model driven here is the £40,135 E 220 d Coupé. It runs Mercedes-Benz’ latest aluminium-block turbocharged 2.0-litre four-cylinder diesel engine (which is fully EU6 emissions compliant thanks to a selective catalytic converter and urea injection system), producing 191bhp @ 3800rpm and 295 lb ft @ 1600rpm. 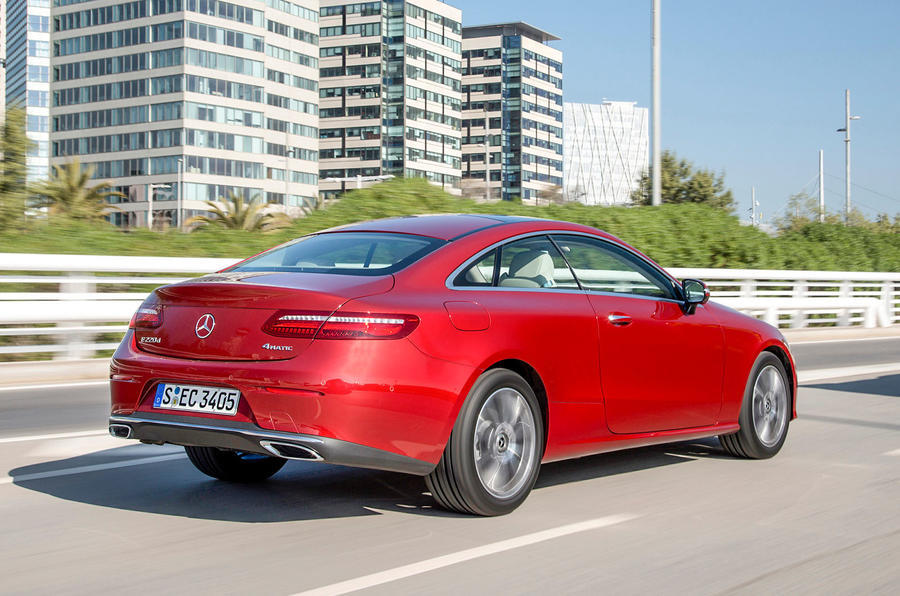 All models come fitted as standard with a nine-speed automatic gearbox. The E 220 d Coupé and E 300 Coupé are rear-wheel-drive, while the E400 4Matic, as its name suggests, has Mercedes’ optional four-wheel drive system, which provides a nominal 45% front, 55% rear apportioning of drive.

In combination with the Dynamic Body Control and Air Body Control suspension, the E-Class Coupé also gets Mercedes’ Dynamic Select system, which allows the driver to alter the dynamics characteristics with four driving modes: Eco, Comfort, Sport and Sport Plus. 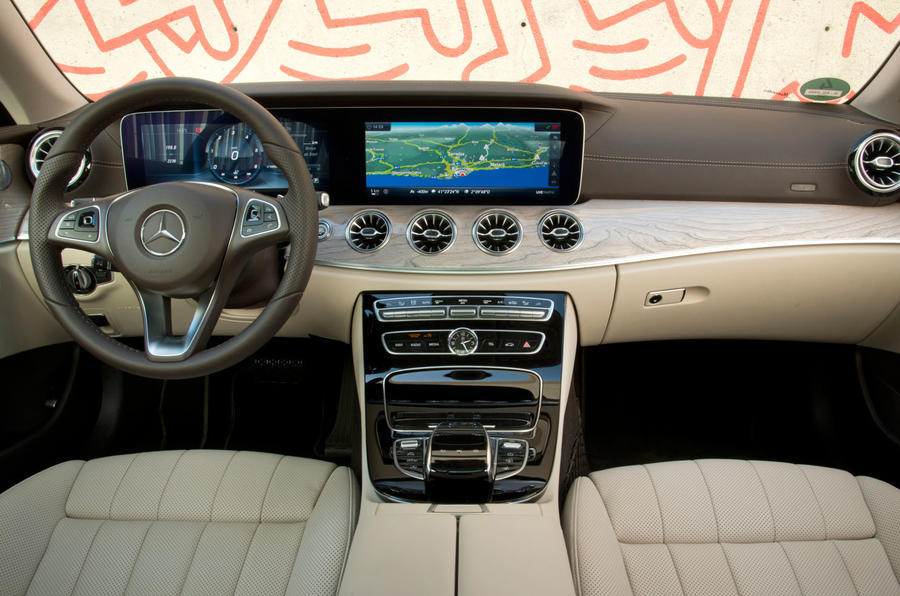 Really rather good. It's far more appealing from a driver’s point of view than the previous E-Class Coupé and more engaging than the current E-Class saloon. That said, this E 220 d model isn't overly eager, either in its performance or its actions. Rather, it delivers a respectable turn of speed and a good sense of involvement in a calm and collected manner that will no doubt appeal to the sort of customer Mercedes-Benz is targeting with this car.

Thankfully, its engine is more refined the iron-block unit of the old E 220 d Coupé, and its automatic gearbox has been upgraded from a seven-speed unit to a nine-speed one.

Step off is smooth and, with a good deal of torque low down in the rev range, impressively responsive. Gearshifts are crisp and reasonably rapid, even under full throttle. Together with a 23bhp hike in power, the more closely stacked gear ratios result in a 1.1sec reduction in the 0-62mph time of the old E 220 d Coupé, at 7.4sec.

The new E 220 d Coupé also proves wonderfully relaxed and serene at motorway speeds. A word of warning, though: with a 16-litre reduction in fuel tank capacity, down to 50 litres, range can’t match that of the proceeding model, despite a 4.9mpg improvement at a claimed 70.6mpg.

From a dynamic standpoint, the E-Class Coupé does everything you’d expect. There’s an appealing completeness to its chassis engineering and it is hugely competent over a whole variety of roads. However, when coupled with the optional 4Matic four-wheel drive system, as fitted to our test car, it is not exactly gushing with verve, nor is it quite as entertaining as Mercedes-Benz would perhaps have you believe. 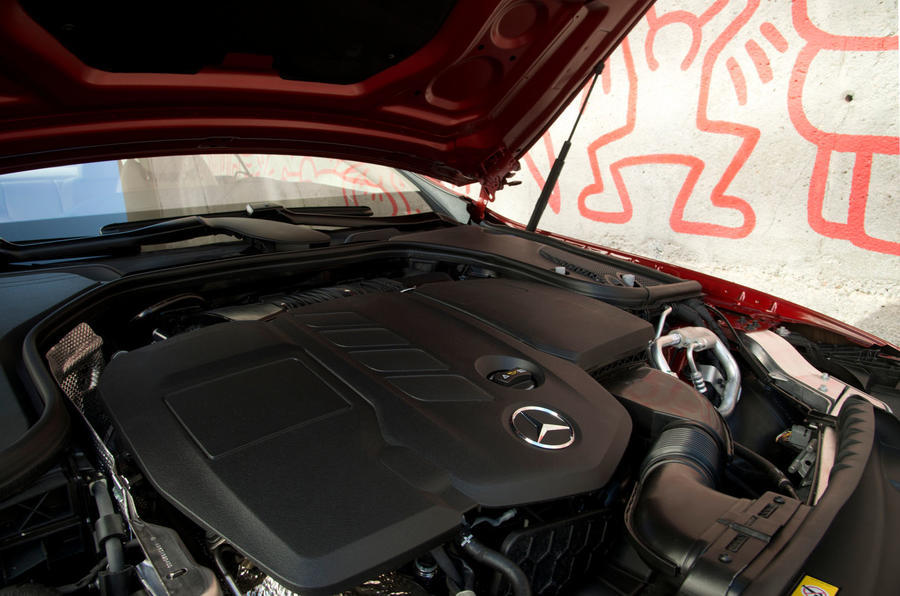 Grippy properties ensure there is always plenty of purchase. When you turn in to corners, the car feels willing, and the weighting of its steering builds up nicely to provide a good deal of resistance as lateral forces increases. However, the electro-mechanical set-up is clearly tuned for relaxed handling properties, being rather less direct than one might expect in a car with such overtly sporting overtones.

The optional Air Body Control suspension (along with optional 19in alloys here) does an excellent job, too. There is an obvious degree of body lean when you push hard in corners, but overall body control is very good, ensuring the car is well tied-down and never ponderous.

The ride is also mostly good, delivering impressive compliance and absorbing imperfections around town without too much bucking or shudder through the car's body. However, where the E-Class Coupé really excels is out on the open road, where it delivers settled and comfortable qualities at speed that make it a wonderfully capable proposition for long-distance journeys.

Meanwhile, the interior looks great, and is far roomier than before, especially the rear, which can now accommodate two adults in far greater comfort than the old E-Class Coupé could.

The design of the interior leans heavily on that of other new E-Class models, but it has a number of bespoke touches, including newly designed air vents, automatically extending feeder arms for the front seatbelts and some model-exclusive trim panels. You can optionally have two 12.3in displays, one for the instruments and one for the infotainment system, with the latter being operable either via touchpads on the steering wheel or a rotary dial controller and a touchpad on the centre console. 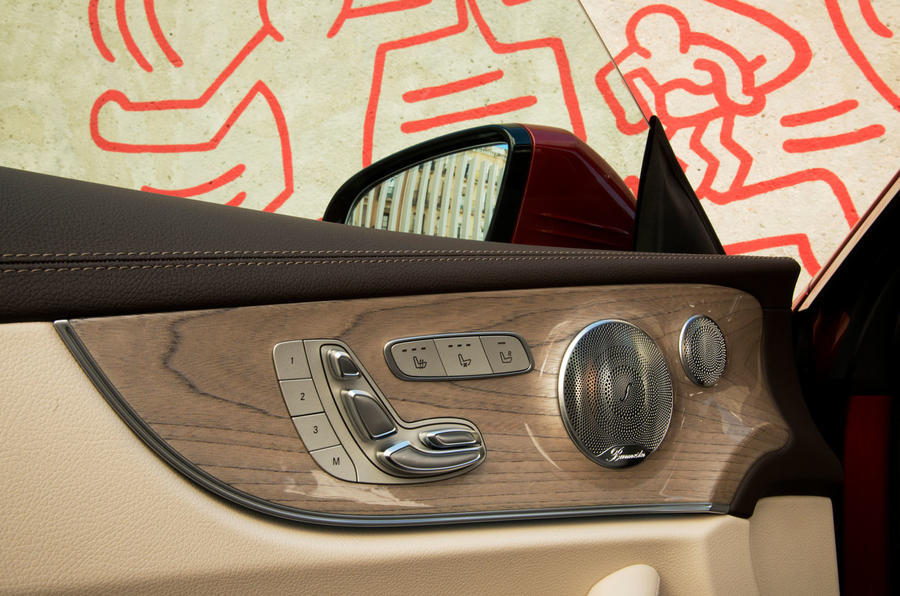 If you’re looking for a stylish yet roomy diesel-engined coupé, the new E 220 d Coupé should definitely be among your considerations. It's highly accomplished and a big advance over its predecessor on many levels, and you can’t doubt its style or quality, which are both very much at the root of its appeal. However, just don’t expect the last word in performance or, when fitted with the optional 4Matic four-wheel drive system, ultimate driver involvement.

Bit bling. Reminds me of some questionable night clubs with all that LED/neon-a-like lighting.
rdsreference 11 March 2017

Sums up the problem with German interiors? Without Ratan Tata The British luxury car market would be dead. German interiors have always been some of the best available if not at the least the best quality for fit and finish. Although the Scandinavians of late are giving everyone a run for their money thanks to Geelys deep pockets. The best car in the world is still the S class in real terms anyway. The new E class interior given the correct choice of materials is one of the best if not the best out there. The Velar is a prototype it's very interesting no doubt but the capacitive touch screens probably won't work in 5 years time. But isn't that just expected, Watch this space.
Saucerer 10 March 2017

Sums up what is wrong with German interiors

The interior of this particular E-Class coupe simply sums up the problem with German interiors and why they just can't do luxury properly or design an interior that looks inviting or exquisite. Here, we have a two tone dashboard using hideous colours, separated by a bit of wood trim that looks more like beech laminate flooring. And at the bottom the centre console remains glossy black, looking completely at odds with the rest of the colour schemes. And then that screen, common with all E-Classes, just looks like an afterthought as is not what you'd call integrated, while the unique air vents looks like they've just been thrown in afterwards. And this is not a problem that just affects this E-Class coupe, or even Mercedes in general, the same can be said for any Audi, BMW, Porsche or VW interior, they just can't do luxury or style, and it's just not the materials and colours, but the basic archirecture and use of screens, buttons and their designs. They so need to see how JLR do it and comparing this particular E-Class' interior to that of the new Velar unveiled last week sums it up, the Range Rover is exquisite and will look great in any colour and trim, the Merc's does not.
View all comments (8)