From £142,3658
Share review
Mercedes-AMG’s V8 sports car gets a hardcore chassis makeover but remains usable and enjoyable on the road, even if it has still not quite made it into Porsche RS territory
Share
Open gallery
Close

This is Mercedes-AMG’s new top-of-the-range GT super-sports car, and its latest attempt to turn the front-engined two-seater into the sort of hardcore driver’s car to force its way into a buying conversation that might also involve the Ferrari Pistas, McLaren Longtails and Porsche GT3 RSs of this world.

It’s a lofty ambition, particularly given that the GT hasn’t so far suggested that it has quite that sort of dynamic potential in its various other forms. The only other AMG sports car that has ever really approached it was the SLS Black Series. But given that AMG boss Tobias Moers seems hell-bent on proving that anything Porsche can do Affalterbach can do every bit as well, you’d imagine he won’t be satisfied until he’s earned a seat at that particular table (where, presumably, all are of fixed-back, integrated-headrest design, and the whole set-up looks not unlike the dugout at Real Madrid).

Mercedes watchers suggest that this won’t actually be the ‘ultimate’ version of the GT, with a Black Series derivative of its own secretly scheduled as an end-of-run special. But while certain aspects of the GT R Pro’s specification seem to leave notional head room for such a car, others make you question how much of it really does exist.

It gets an integrated half-sized roll-cage also, which increases the rigidity of the chassis along with some new carbonfibre underbody bracing. And it also gets entirely rigidly mounted rear suspension, where it’s only partially so in a regular GT R. 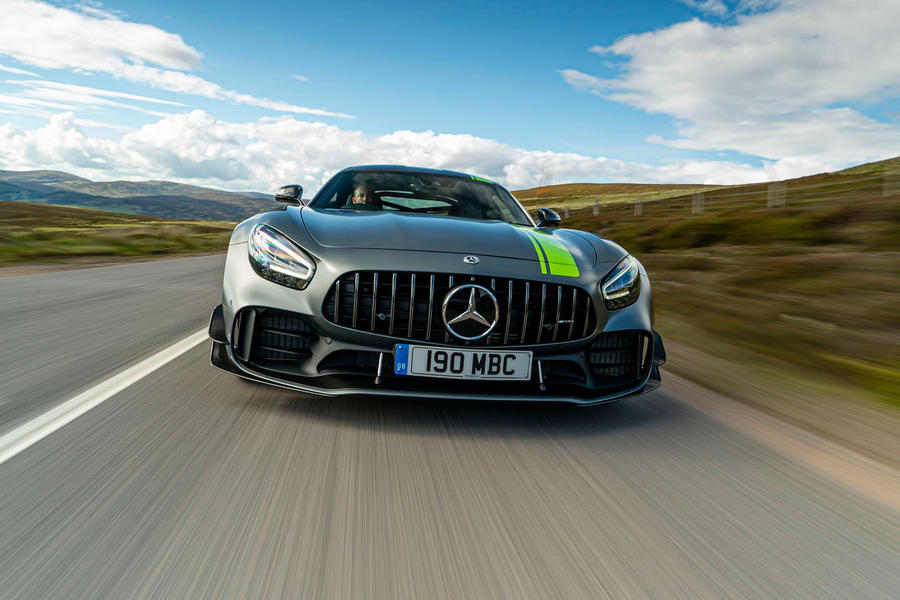 Sounds like a recipe for disaster on craggy UK B-roads, doesn’t it? Actually, it’s anything but. Regrettably, we didn’t have the chance to drive the GT R Pro on track (although we did at Hockenheim earlier in the year) and didn’t have the opportunity to explore every adjustable facet of that configurable suspension either. Although the rebound adjuster knobs for the latter are accessible enough, getting to the controls for compression, preload and anti-roll settings means getting the wheels off. And sadly there’s no trolley jack in the glovebox.

However, in what I could at least see was a mid-range suspension setting leaving room to both stiffen and soften should you wish, the GT R Pro deals with normal roads and everyday driving encouragingly well. It feels at once more rigid and all-of-a-piece than other GTs and also more settled and composed over bumps. That new suspension has dialed out much of the restive pitch-sensitivity and aggressive firmness from the GT’s close body control.

The car’s ride has that noisy-yet-ever-taut, expensively engineered feel that’ll be familiar to the owners of Porsche RS cars and track-intended Lotuses among others. It thumps a bit over Catseyes and sharp edges, and it bristles over high-frequency inputs and at town speeds – and in neither case would you call the upshot entirely comfortable. It’s the rear axle that’s the noisier of the two, mostly because the car’s standard half-cage bridges the rear suspension towers and it allows every input a direct audible route into the cabin. But then roll-cages do that.

There’s some suppleness to proceedings over longer-wave undulations taken at decent ground-covering speed, thankfully, and first-rate initial damper response so that, despite looking so short-on-travel given how well those lightweight forged rims fill the arches, the car’s axles don’t seem so most of the time. I spent a while wondering, in fact, whether the GT R Pro might even be the best-riding GT I’ve driven. In some ways, not least because it’s not a particularly high bar, it might be.

If the car doesn’t quite qualify as a bona fide world-class track car, then, it’s not for the want of dynamic composure or body control. The car’s powertrain isn’t short on dramatic charm or any-rpm speed and response. You can wind up the V8’s crank to the far side of 5000 and marvel at its angry theatrical fervour; or – unlike in some smaller-engined rivals – you can leave it in a high gear and pick up speed easily from low revs. Either way, this is a very fast car with a bit of multi-faceted character about it. The transaxle gearbox can engage a little abruptly at low speeds if you use the sportier driving modes, but left in Comfort it can be smooth and predictable, and always shifts quickly in manual mode.

It’s the slightly hyperactive feel of the car’s handling – specifically, the steering – that might provide the dynamic stumbling block. Like all GTs, the GT R Pro sits you a long way from the front axle, and tries to make up for that with the added off-centre agility conjured by the car’s variable-ratio steering box and active four-wheel steering. The trouble is, the trickery doesn’t help – and so the notional distance imposed by those often-unpredictable systems ends up being as much of a problem as the physical distance between your backside and the front of the car.

You just never quite feel entirely comfortable or fully in tune with the car’s handling responses – something the added lateral purchase and agility possessed by the GT R Pro’s chassis probably exacerbates a little. Every time you venture beyond a quarter turn of lock, around a roundabout or T-junction, the rate of gain in the steering gear somehow takes you by surprise. There’s useful weight and feel to the rack initially, but it begins to go missing in some dynamic modes as you add speed and lateral load.

And what it all amounts to is that, in the sorts of moments and scenarios where the character of the very best driver’s cars tends to crystallise and their abilities begin to shine, the GT R Pro remains a handful. It’s a more competent car up to a point, but still a hard one to predict at times, and to fully put your faith in. 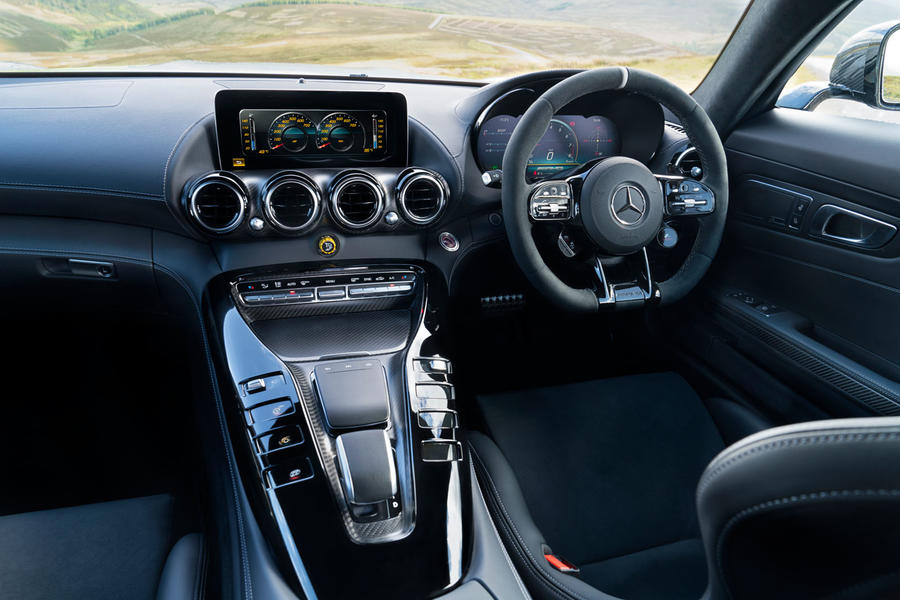 Those who simply want the very best of the Mercedes-AMG GT crop certainly should. Affalterbach may have started with a rough diamond here, and it may also be taking its time in the polishing, but the GT R Pro represents clear progress for the car, and for the brand, in a number of ways.

Track-ready, front-engined V8 hotrods don’t come any more purposefully engineered, or much more dynamically convincing, than this. If you happen to think modern track-day supercars have become too tame and too easy to drive, the AMG’s slightly naughty handling character may be exactly what you’re looking for. Thanks to some very effective electronic stability controls mostly, it’s also a car you could use on the road, in a variety of conditions, and still really enjoy it.

Does it finally put the AMG GT into Porsche RS, Ferrari Pista and McLaren Longtail territory, though? I haven’t driven it on track, remember – and it’ll take a proper back-to-back circuit test to be sure. But on this evidence, I wouldn’t quite expect so. Those rivals just have this uncanny, almost supernatural drivability at the limit of grip, delivered through supreme pace and stability, or supreme tactile feel, or otherworldly handling adjustability – or a mix of all of the above.

They’re lighter and naturally keener. And they inspire incredible confidence right when you need it, which the GT still doesn’t seem, to me, quite ready to equal, however much mechanical grip it may be developing or speed it may be capable of carrying.

Confidence: that’s the final piece of the puzzle, Mr Moers. Not grip or power or downforce or yet more trick electronics. Just confidence. Perhaps there is room for that Black Series after all. 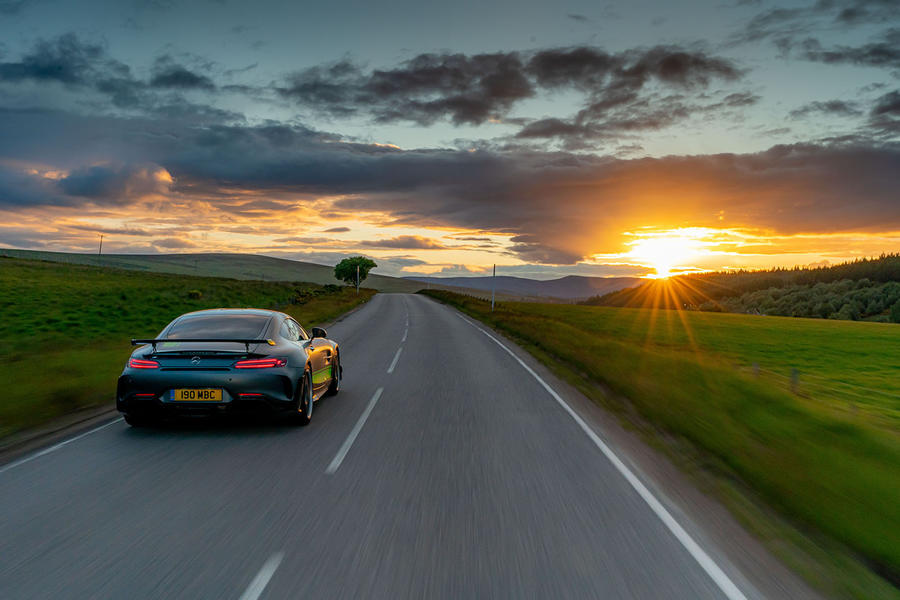 I.M.H.O it is hideous

The styling is so awkward and could think of dozens of nicer cars to spend £100k to £200k.

Agree its no looker.

What do you want?

You buy what you like, not what an article tell you....