The CLA 45 S Shooting Brake is the sort of special car that comes along when a manufacturer follows its nose for longer than is normal or, perhaps, sensible.

The road that led to the creation of this expensive and unbelievably quick junior AMG estate began when Mercedes introduced the third-gen A-Class in 2013. It was a different car from the imaginative, original A-Class. The body had morphed into more customary two-box proportions and, as for the powertrain, rather than sitting obliquely beneath the front footwell in an ingenious feat of packaging that didn’t compromise safety, it now rested above the front axle, as with every other hatchback.

It was sad to watch the likeable A-Class fall to convention, but the new layout meant Mercedes could put into production an idea it had only ever dared toy with for those precariously tall early cars. That idea was to build an entry-level AMG that could fire the brand headlong into the hot hatch wars. And AMG being AMG, when that car arrived in the form of the A45, the 355bhp developed by its hand-built 2.0-litre engine really was, for a while at least, ‘world-beating’. And outrageous.

At the same time, Mercedes also took the opportunity to re-body its reinvented A-Class. The sleeker Mercedes-Benz CLA saloon was born and it spawned an all-new shooting brake with added practicality and, in the eyes of many, added desirability. The arrival of AMG derivatives then gave us one of the most curious and rare-groove cars on sale at any price point in the form of the original CLA 45 AMG Shooting Brake of 2015. It felt forged in the mould of the V10 BMW M5 Touring and Ferrari FF: fast but useful and quirky, even though, with limited space and route-one handling, it never appealed as much as it could or should have.

That car has now been revamped, AMG permitted to reprise the 45 recipe, only with more power and technology. There’s absolutely no mistaking the new car, either. In 2020, the CLA 45 S comes replete with almost comical motorsport-style canards, four 90mm exhaust pipes and AMG’s new 2.0-litre M139 meisterwerk powerplant unusually swivelled 180deg. It means the turbo now faces backwards, vacating space for a generous, Corvette-esque intake duct at the front along with better aero. The M139 also delivers 415bhp and 369lb ft and accelerates the car to 62mph in 4.0sec, making the CLA 45 S Shooting Brake quicker on paper than both AMG’s own V8-engined C63 Estate and even the Audi RS4 Avant. And now I suspect I’ve really got your attention. 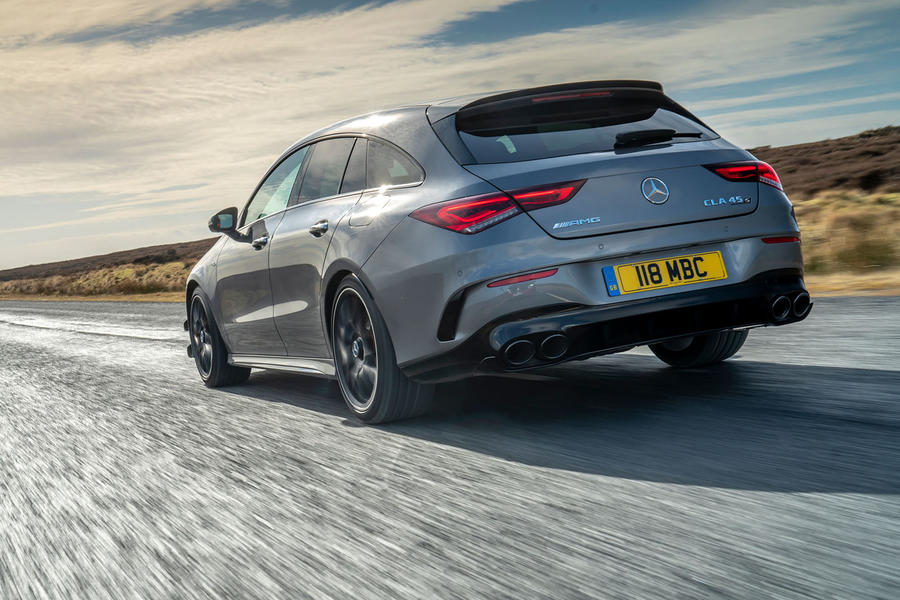 Out-sprinting the Audi really does guarantee mad pace, doesn’t it? The AMG is of course lighter than its rivals from the class above, although at 1705kg it’s also some 90kg heavier than before. Some of that extra mass derives from the new AMG Torque Control rear axle that, as in the Mercedes-AMG A 45 S hatchback with which this hottest CLA shares so much DNA, uses electronically controlled clutch packs built into the differential.

At its most extreme, the set-up can siphon all of the available torque – half of what the engine is making at any given moment – to either side, and the car has all too many modes through which the driver can influence the behaviour of the system. On track, it means things can get quite lurid, although in the car’s most conservative modes, you’d never guess it had this in its locker.

At the front, you have the same limited-slip differential (LSD) found in the A45 S, which also donates its electromechanical steering, dual-clutch ’box and adaptive suspension. It’s a similar story inside, so if you like the bright, prominent screens and slightly chintzy details of the A-Class, you’ll like it in here (not least because, in the AMG, more of the trim is actual metal). If you don’t, you’re unlikely to be so understanding of the fact that AMG’s serious bucket seats eat into the regular CLA’s already limited rear leg room and head room is only adequate.

More concerning for the Shooting Brake’s appeal as family transport is the fact that the rear door grabs jut out just where the passenger’s leg will want to go. Along with the fact that neither seats-down carrying capacity nor the aperture of the boot opening is as generous as you’ll get with fully fledged performance estates or even the outgoing Volkswagen Golf R Estate, it means the Merc is slightly compromised from the outset.

So it’s an imperfect tool, but if you merely want an A45 or CLA 45 saloon with added practicality, you’ll have few complaints: the Shooting Brake beats both hands down for space, and the ski hatch is also useful.

On the move, the car again does an A45 S double act in that it can be a picture of docility one moment then reveal dizzying performance and capability the next. This duality borders on the freakish. During normal, fast-ish road driving, the CLA 45 S rides confoundingly well in its most languid damper setting. Rarely does it crash onto its bump stops and rarer still does it fall prey to those fleeting but heart-stopping losses of composure you get with estates when the big body wants to go one way and the chassis another.

The steering response is also clean but surprisingly meaty, the car easy to place and dry grip levels mammoth, even if in the wet you can break traction at either end with surprising ease. That this pumped-up engine will also do 38mpg on the motorway and everywhere you go possesses easy drivability – even with its big turbo, huge output and satisfactorily peaky power and torque curves – is exceptional.

Rotate the mode dial and it’s difficult to envisage too many cars in any class that could keep up with the CLA 45 S. Despite its identical wheelbase, the CLA has greater track widths than the A45 S but is still conveniently proportioned and stress-free on B-roads. Although the engine sits fractionally ahead of the front axle, you’d also swear it was tucked under the dashboard, such is the way the car flatly ferrets through direction changes. Admittedly, the CLA doesn’t generate quite the same sense of wrist-flicking agility as the A45 S, or the almost total front-axle stability of an RS4, but what it will do is lean generously on its rear axle if driven in the required manner.

You won’t necessarily achieve true power oversteer, but there are easily unearthed moments where the CLA does an excellent impression of being rear driven, and the sense of balance this brings. In short, it does fun better than expected – more so in the wet. 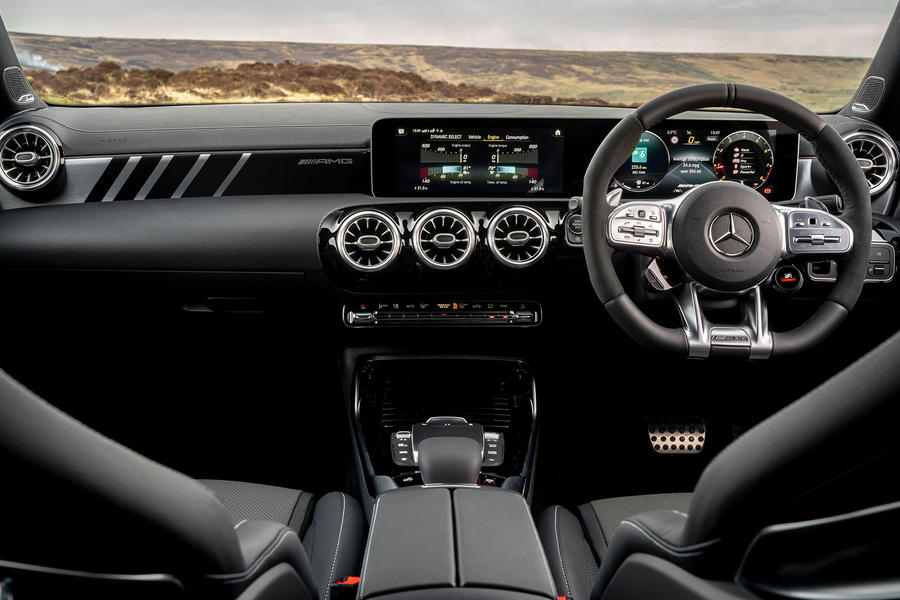 So why only four stars? Ultimately, the electronics-flavoured handling sits in the faintly artificial no man’s land between fiercely nose-led hot hatch and something more mature and elegant dynamically, such as the C63 Estate. The CLA 45 S Shooting Brake is also expensive and ergonomically found wanting.

There is therefore an uncomfortable feeling you might actually get greater enjoyment out of something more normal, more sensible and perhaps not quite so special. Something as comparatively ordinary even as an LSD-equipped BMW 330i Touring. 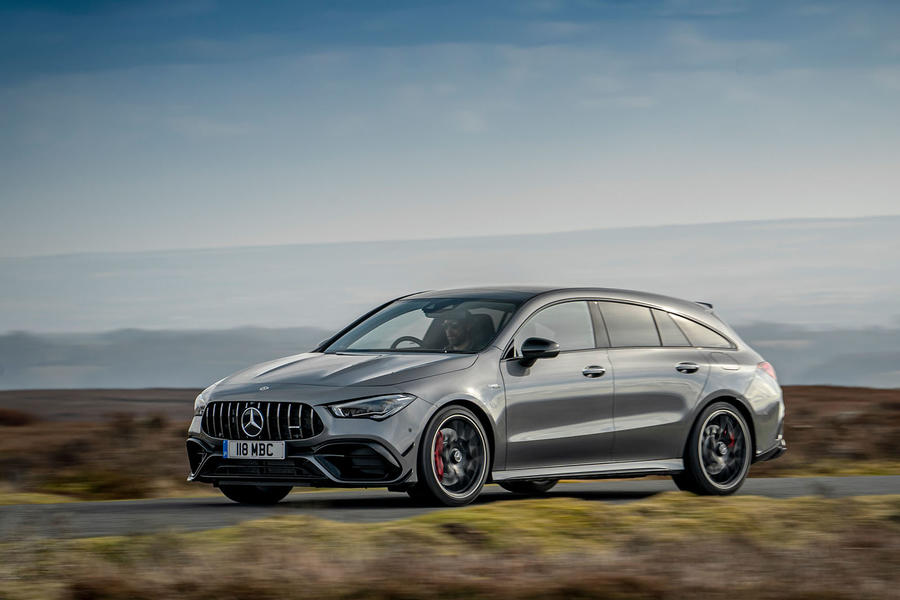 ... and in profile, it would look like a banana on wheels!

Is "Shooting brake" German for: "impractical estate car due to style over substance"?

The sloping rear end looks as though the only things you could put in the back, are a pair of shotguns!

(Are Mercedes hoping people will look at the car and think: "That's a Purdey looking car!"? - I'll get my coat!)

Some will buy it and then re-sell it at a loss...

A colector's car, this is not!

And who designed those 'Starship Entreprise' air-vents? They looked fine on mid-seventies Datsuns but on a Merc in 2020?