From £165,4208
How does the McLaren GT shape up on a proper cross-continent journey and on the UK's uniquely challenging roads?
Open gallery
Close

This is McLaren’s take on a GT car, which means it’s a very different proposition to a traditional grand tourer.

In fact, as we’ve already found out, it’s quite a bit different from the time-honoured template of a continent-crossing, leather-clad cruise missile. With its mid-engined layout, extremely quick-witted handling and shattering performance, the GT is more supercar with extra spoonfuls of civility than the more typical sybarite with sporting pretentions.

This is no bad thing, of course, and there are many out there who will revel in a car that serves up 95% of a 720S’s searing straight-line pace and wrist-flick agility but is also relatively easy to live with. Yet for all that, our only test of the GT has been on the launch event in the south of France, which concentrated its driving route on the serpentine roads that wriggle their way through the hills above St Tropez. To truly judge a GT you need a sterner challenge, such as driving the length of France and then onto the UK, where its ride comfort in particular would be sorely tested. Which is exactly what we did next.

Before that, it’s probably worth a quick recap. McLaren says the GT is a stand-alone model but, in terms of price and performance, it fits somewhere between a 570GT and a 720S. Around two-thirds of the car is new, with much of the changes being found in the virtually all-new sheet metal (and carbonfibre) body. Until the Speedtail arrives, the GT is the longest car the brand makes, while the extended glasshouse, powered rear hatch and long nose all hint at the GT’s more practical and usable remit.

The interior is an exercise in contemporary luxury, all beautifully stitched leather and varying types of real metal finish - the knurled infotainment knob and perforated Bowers & Wilkins speaker grilles are particular highlights. There’s also that large 420-litre luggage compartment at the rear, complete with its hard-wearing, Nasa-specification lining. McLaren channels air from the side pods under the boot floor to keep it cool (no more than 40deg C, they say, which is hardly cool), but on hot days and in slow-moving traffic, any items stored at the very rear over the exhausts do get a trifle warm.

Under the sleek and elongated body is a new version of the familiar carbonfibre tub, while slung between the axles is a 4.0-litre V8 that features bespoke pistons, a higher compression ratio and smaller, quicker-acting turbos. Added together, it results in 612bhp at 7500rpm and 465lb ft at a heady 5500rpm - although much of the muscle is available from around 2000rpm. There’s an adaptive sports exhaust that aims to be less bombastic on start-up, while extra sound-deadening promises to soften the edges of the flat-plane crank’s occasionally industrial overtures.

Much of the suspension hardware is familiar, but with softened spring rates and the first stand-alone use of the firm’s algorithmically orchestrated adaptive dampers - we’ve seen them on the 720S, where they work in combination with the interconnected suspension. There’s more soundproofing here, while the steering has been tuned to sacrifice some shimmy and chatter in the name of refinement. 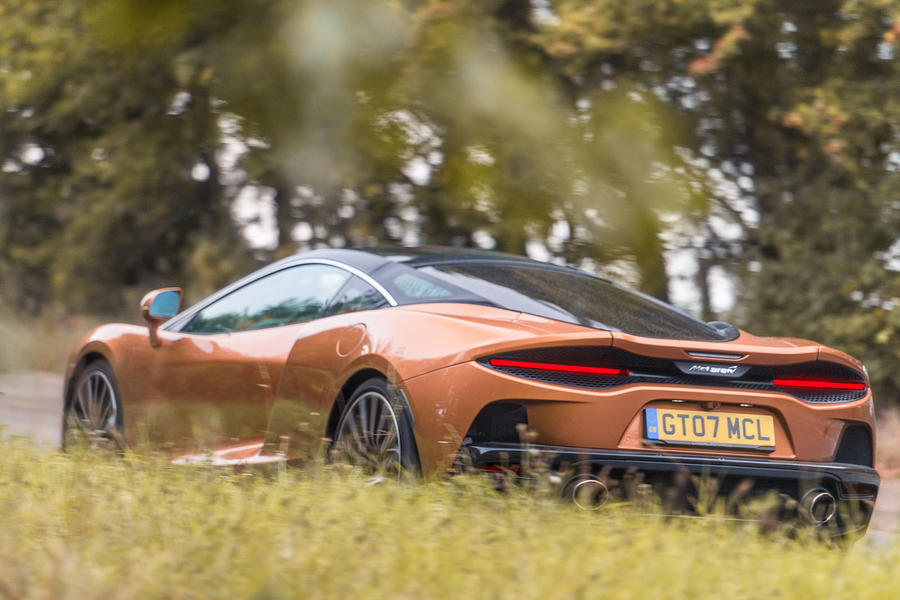 If you love driving above all else, then this is the GT for you. No matter which way you slice it, as a device to pick apart rolling and twisting roads, the McLaren leaves its heavier and more traditionally engineered rivals looking like drunks with two left feet. In terms of grip, balance, poise and agility, the GT takes some beating.

Yes, the steering is calmer, but it’s still quick and full of feel, while the rest of the car appears to rotate around your hips in precise relation to the amount of lock you wind on. Better still, the slightly softer suspension (in Comfort and Sport, at least; Track is still too firm for the road) and less aggressive turbo lag allow you to start manipulating your line through a corner, both on and off the throttle.

However, this is all expected of a McLaren, as is the searing performance, but what about its GT credentials? On the long drag back to the UK, it proves more relaxing than you’d expect. No, it’s not nearly as supple and soothing as a Bentley Continental GT, but it’s more effortless than you’d expect, especially for a car that’s so sharp in the mountains. On the smoothly surfaced French autoroutes there’s decent suppleness, while the Pirelli P Zeros seem not to get overly vocal, even over coarser surfaces.

Expansion joints cause the odd slap and a wriggle of the steering, plus there is some wind rustle from around the door mirrors and A-pillars, but otherwise it’s remarkably restful, helped in no small part by the extra padding on the seats and the relaxingly recumbent driving position and improved visibility - although the view immediately rearward through the mirror and deeply tinted glass is far from perfect. 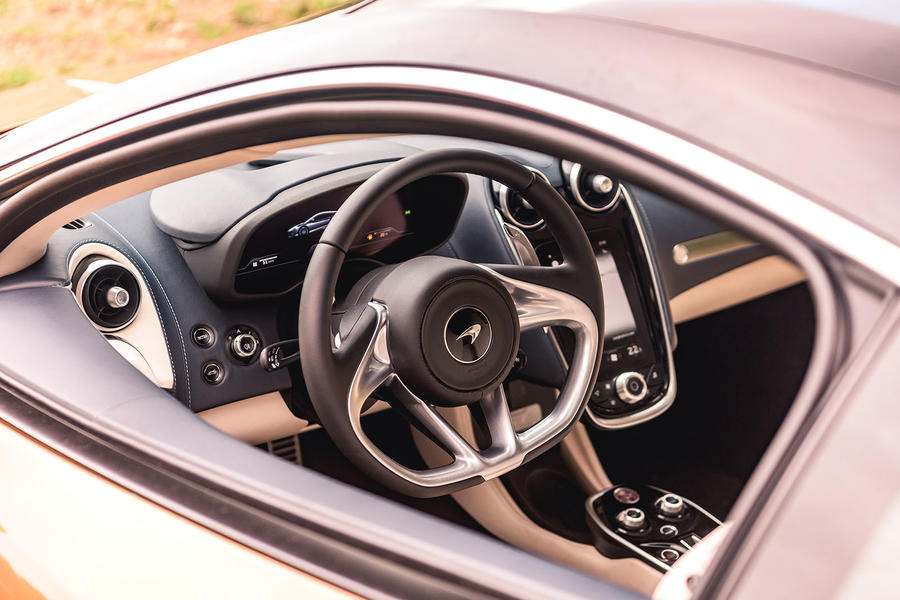 If there’s a criticism here it’s the engine, which is remarkably hushed on a light throttle but can get boomy when under load. Oh, and at around 70mph it’s spinning at just below 2000rpm and ostensibly off boost, meaning it doesn’t have quite the instant, elastic energy you expect of GT when you want to get going after being baulked. However, once the turbos spool up, it gathers speed with a frenzied alacrity. And remarkably it also returned nearly 35mpg at a steady and Gendarme-friendly 85mph cruise.

Yet the real test is found on the other side of the Channel, where the roads aren’t as well maintained and consistently surfaced. And it’s here that the McLaren proves to be less effective as a cosseting GT. The UK’s lumpy patchwork road network exposes the GT’s dislike for sudden sharp vertical movements, the car crashing and thudding where a Bentley in particular would simply pummel the road into submission.

The McLaren’s at its most uncomfortable on pockmarked urban streets, where the combination of slower speeds and sunken drains and potholes results in jarring, stiff-legged and noisy progress, with the extra sound deadening losing the fight against the harmonic and resonating properties of the stiff carbonfibre structure.

Go faster and matters improve, the suspension seemingly working better with more serious loads being transmitted through it. Only on motorways can the issues return, with some concrete sections really causing the tyres to kick up a seriously vocal fuss, while particularly nasty expansion joints send a shudder through the cabin and some kickback through the wheel. 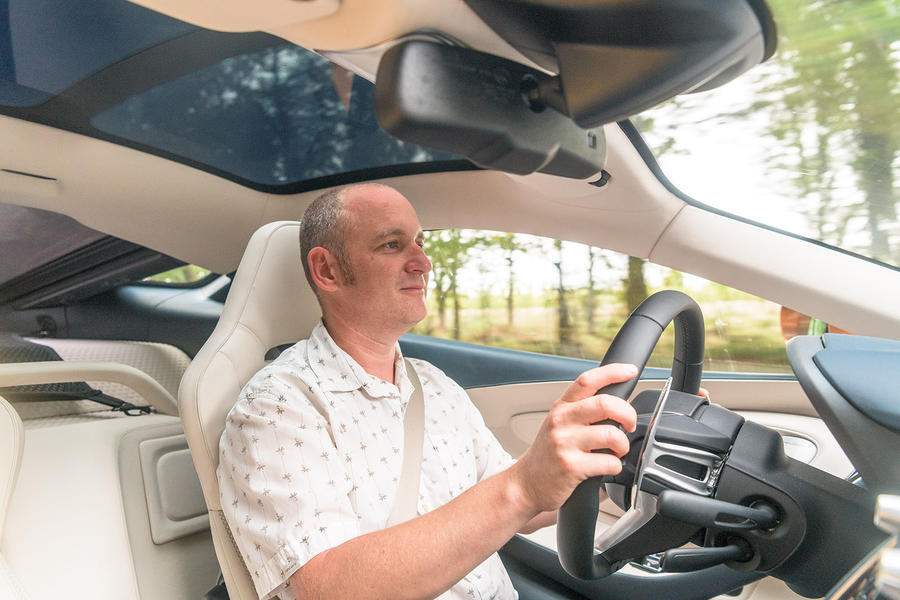 There’s no doubt that, judged by some traditional GT standards, the McLaren falls short, particularly in respect of its occasionally brittle ride and the noises that accompany it, particularly on poorly surfaced motorways.

Yet in most circumstances and on most surfaces it can do the long-distance thing in surprising comfort and refinement, while the extra versatility of that large rear boot means you can carry more than many rivals, as long as you’re not planning on carrying frozen goods any great distance. It feels good inside, McLaren’s take on luxury being to give the interior a real sense of occasion.

So how to class the GT? Well, for a McLaren it’s as refined and usable as they get, and for many this will be enough. But there is enough genuine civility on display here to make this a surprisingly easy companion to live with day to day for those who would normally give the firm’s cars a wide berth.

While there’s certainly a shortfall in comfort and refinement compared with true GTs, it’s nowhere near as big as the vast gulf between these slightly cumbersome machines and the scalpel-sharp and invigorating McLaren when the road gets interesting. I guess it all depends on your priorities. 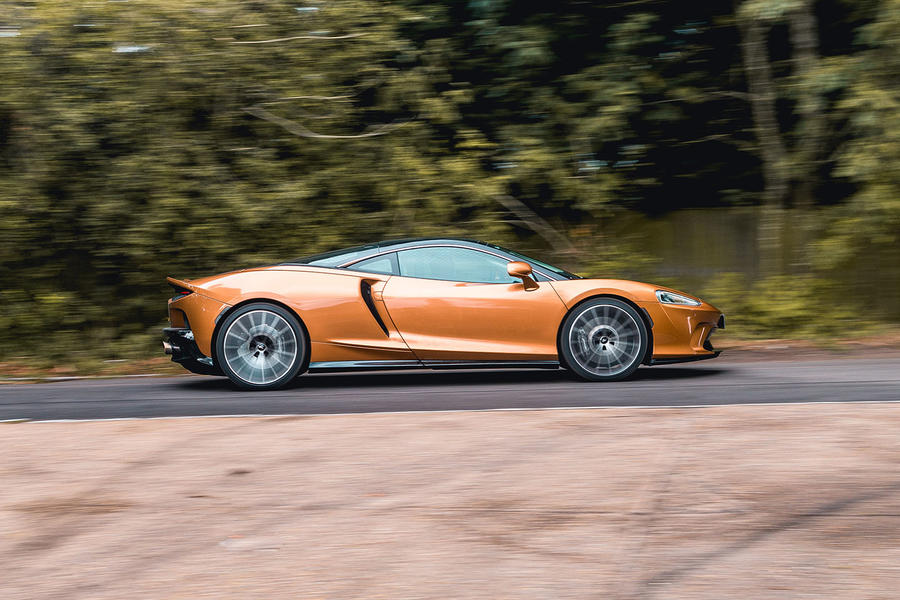 What about the range?

How can this be a GT when it needs to stop for fuel every 200 miles? A Golf Diesel would be quicker on a long journey!!

How can this be a GT when it needs to stop for fuel every 200 miles? A Golf Diesel would be quicker on a long journey!!

Where do you get the 200 mile range from? I think it  will do a fair bit better than that, especially on a cruise.

I don't get it either

So, McLaren's (apparently ground-breaking, according to them) take on a GT is one which doesn't ride all that well, lacks room inside, isn't very refined, and has compromised luggage space (the contents of which it'll cook for you).  Why would you buy this over a Bentley etc?  At this price point I'd wager the customers have enough money for a proper GT AND a proper sports car...

The car of power

A McLaren or a Ferrari or a Lambo, for road and track? Whatever the choice you'd need a daily driver and something for those longer weekend hauls to Scotland, the West Country and/or definitely the Continent. And now you don't: one car to rule them all.