From £165,4209
Woking’s most user-friendly car to date is still a McLaren first and foremost, and a GT more in name than behaviour
Open gallery
Close

McLaren says this is a new kind of grand tourer. A lighter, more dynamic, more, er, McLaren-y kind of grand tourer. It exists because the 570GT didn’t quite hit all its marks. It was gorgeous, rapid and more practical than the 570S, but the feedback from the punters was that they wanted a car like that but even more so. And the GT is the result.

It's anything but a softened-off, reskinned and renamed 570GT. It has its own bodywork, its own specification of carbonfibre monocell, the 4.0-litre engine from the 720S – albeit with smaller turbochargers and high-compression pistons – and the Proactive Chassis Control suspension also developed for the 720S. Its steering, brakes and stability system all have a bespoke tune, while Pirelli has provided a new P Zero tyre with a compound that has a broader envelope of ability, particularly on wet roads. 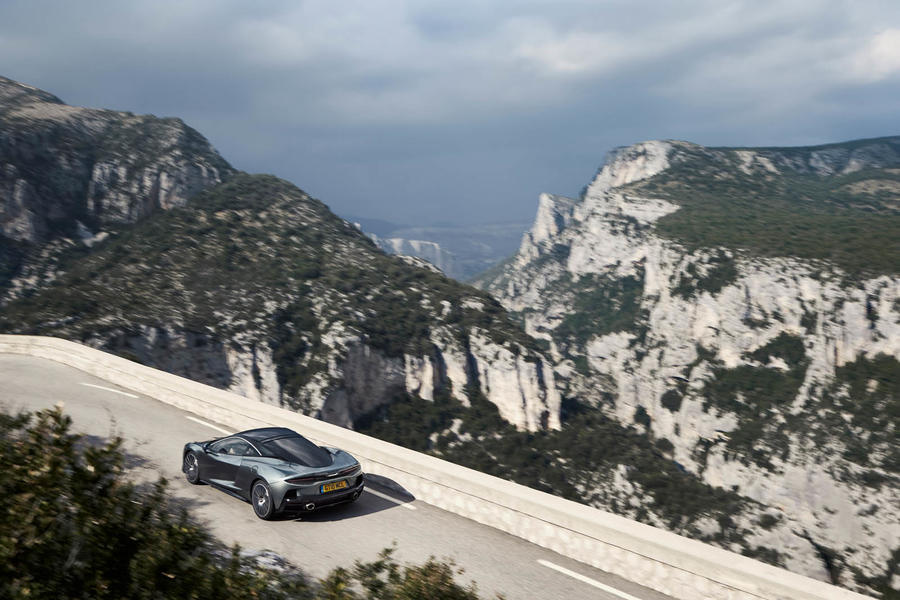 The engine has been lowered to provide more luggage space, while the ride height has been raised so that, with the nose lift, the GT will get over the same speed hump as a Mercedes-Benz C-Class. Inside, there’s a new instrument pack and sat-nav five times faster than the previous version. Yet the price is a surprisingly modest – by McLaren standards – £163,000. Perhaps that’s why the company expects it to account for 25% of sales. And no, there's no Spider version in the current product plan, which extends up to 2023. The GT is a standalone model.

Yet despite the fact that 60% of the parts on this car are new, it feels neither like a new kind of McLaren nor a new kind of grand tourer. It feels like a McLaren. And I have no issue with that.

Interior quality has taken a big step forward over the 570GT, but there’s no more room for you, even though there’s now 570 litres of luggage space – segment-leading if you forget the stuff people carry on the back seats of 2+2 rivals. It feels cosy and intimate in here, not expansive and luxurious as you’d find in a traditional grand tourer like the Aston Martin DB11 or Bentley Continental GT. 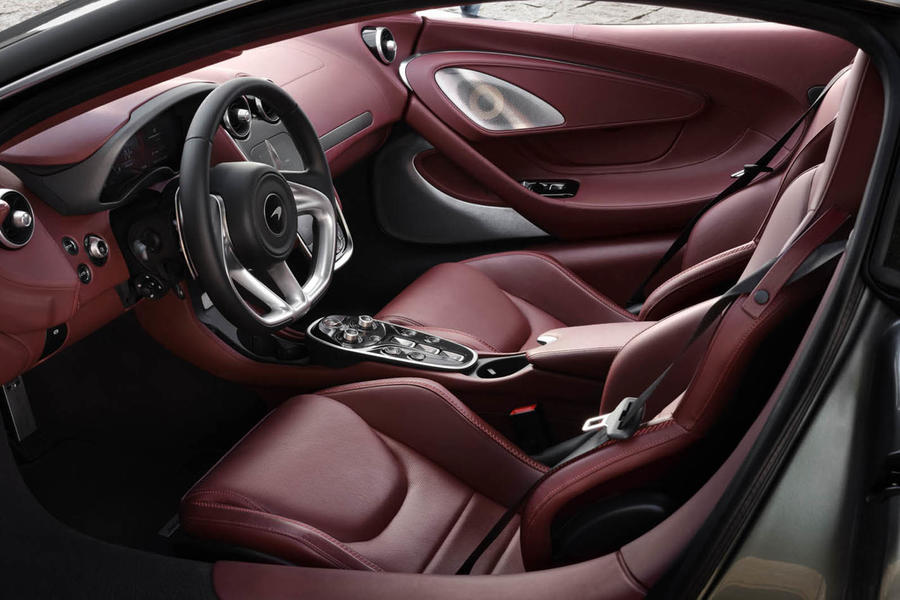 The engine is no quieter but uses sound-deadening material and exhaust tuning to sweeten its voice, yet it still sounds sharp and urgent. If McLaren wanted the rumble and thunder you’d more traditionally associate with a grand tourer, it would have needed to fit a cross-plane crankshaft, which would have been a ballsy move for sure but perhaps more in keeping with the brief. Even on part throttle in top gear with the exhaust valves closed, you're aware of the V8's raw-sounding presence.

And the GT still drives like a McLaren. Yes, the power arrives earlier, the torque curve is flatter and there isn't the insane top end of the 720S, but this is still a sharpened stiletto of a motor, standing in stark contrast to the broadswords wielded elsewhere.

Nor do you need the traditional ‘slow in, fast out’ approach to corners you’d usually employ in a conventional grand tourer of far greater heft and with its engine ahead of the driver. You can still carry enormous speed in the GT, and in the highly unlikely event you find yourself needing to replot a course mid-corner, you can rotate the car minutely with your right foot alone, or with the exquisite and still-hydraulic steering, in a way that would simply not be possible in an weightier, less agile Aston or Bentley.

Indeed, if you go looking for those commodities you’d seek in a supercar and that are the first to be sacrificed by conventional grand tourers (grip, poise, feel, traction and so on), you’ll find the full complement alive and well inside the elegantly extended shape of the GT. Were it to come across any one of its ostensible rivals on a wide and empty road, the McLaren would drive out of sight with embarrassing rapidity. 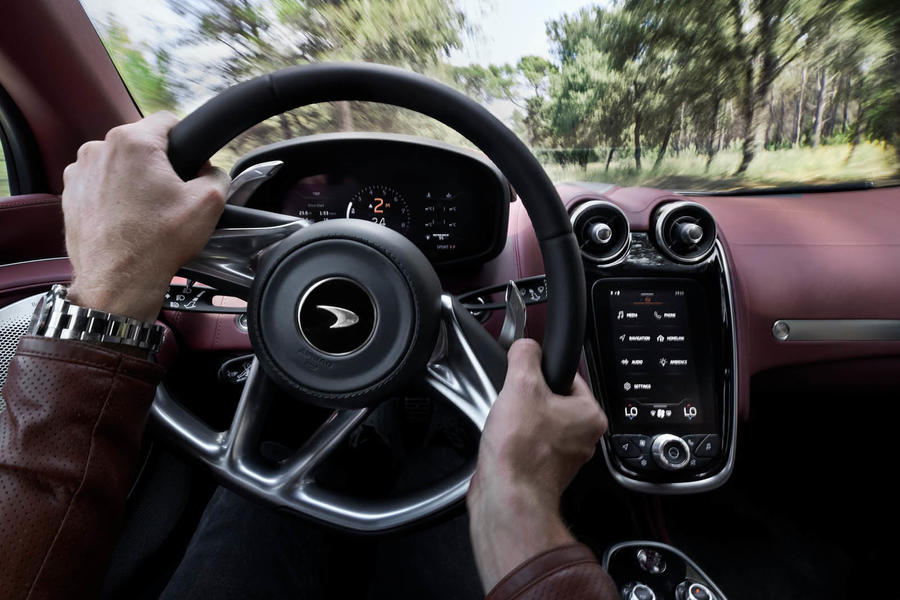 Which leads me to conclude that this car’s sole substantive problem is its name. Despite all that luggage space and the exquisite ride delivered by its oh-so clever suspension, the GT looks, feels and drives like a supercar, albeit one that's uncommonly easy to live with and use.

Actually, while I don’t think it’s going to tempt many Bentley owners, those McLaren customers who said they wanted an even more luxurious, practical and comfortable 570GT are likely to be delighted by the GT; McLaren has not only listened to what they said but acted accordingly. Likewise, people in the market for a car as broadly defined as the 720S but at a significantly lower price point might well be tempted.

McLaren will now surely wait until it has the feedback on the GT before building another that sits more comfortably within the confines of that definition. The rumours of a 2+2 McLaren grow stronger every day, and I suspect it's that car and not this that will be McLaren’s first true GT. In the meantime, forget the name and focus on the enormously able and likeable car beneath. It would have been far more accurate to call it the McLaren Pragmatic Supercar but, I fear, somewhat less catchy… 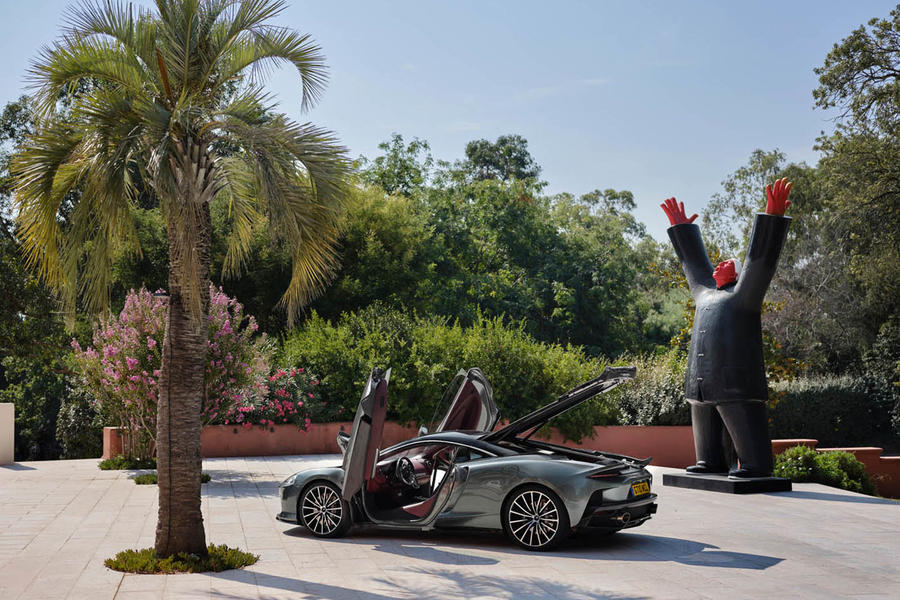 I don’t care what they call it or how they want to position it, it looks just like all the others, which you may or may not like. I don’t. The constant stream of “new” models means that while you order the latest, it probably won’t be by the time it arrives.

And they rust, oh lord if they get rotten quickly.

This is a car which is not adding anything - really, really anything - to modern times. Something deja vu.