From £22,9358
Sweet handling and a plush interior help the stylish new Mazda CX-30 stand out as it touches down in the UK
Open gallery
Close

This new Mazda CX-30 could just be the best-looking compact SUV/crossover on sale today - depending on who you talk to, of course.

That it’s a looker doesn’t come as much of a surprise given that it’s based on the striking new 3 hatchback, and that Mazda has really had form on style since the introduction of its Kodo design philosophy. Its looks are important, too, because Mazda reckons the CX-30 is set to take on the likes of the ever-expanding, style-led, upmarket set of compact crossovers: the Audi Q2s and Lexus UXs of this world. On this evidence, the CX-30 is off to a flying start - particularly in Soul Red.

It arrives in the UK with a starting price of £22,895, a choice of two petrol engines and either a front-driven or all-wheel-drive set-up. The 118bhp SkyActiv-G represents the range entry-point, while the more powerful 178bhp SkyActiv-X sits above it. Both feature Mazda’s 24-volt mild-hybrid architecture.

But while the 120bhp version is the cheaper of the two, it’s the slightly pricier (roughly £1500 model-to-model) Skyactiv-X that’s expected to take the lion’s share of UK sales - some 70%, to be precise. 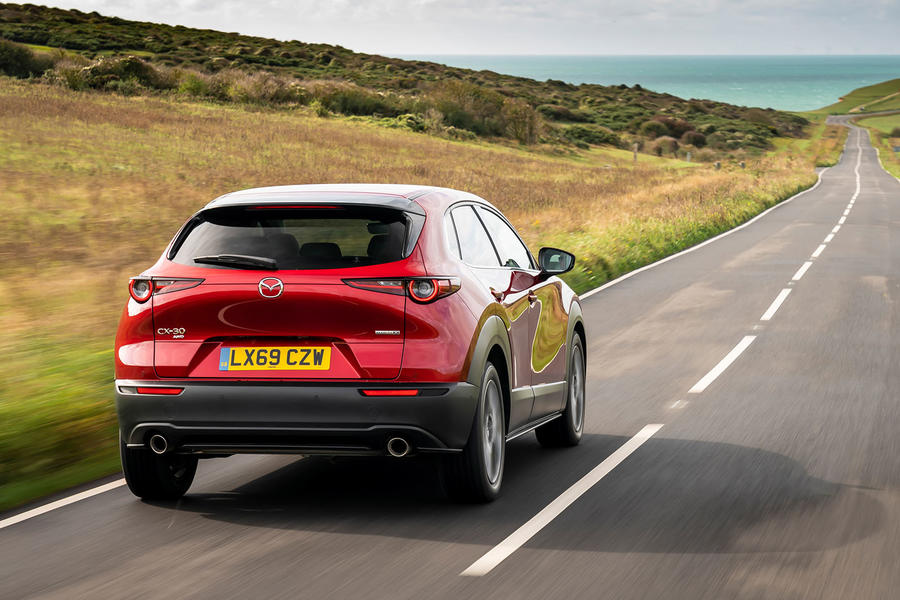 Having driven both engines back to back, it’s easy to see why the SkyActiv-X is angling to be the favourite here in Britain. The 118bhp engine is by all means a sweet little unit - being both responsive and refined - but it also feels a bit gutless.

There’s very little torque low down, and any episodes of meaningful acceleration are always preceded by a need to frantically row your way down through the ratios on the standard-fit manual 'box. The fact that it’s a tactile, slick operator does help you forgive the engine’s lack of punch, but the need to constantly downshift does grate when you want to perform a swift overtaking manoeuvre on the motorway.

By comparison, the SkyActiv-X immediately feels far more muscular. There’s more readily available torque through the mid-range, and the rate at which it picks up pace is much more reassuring at open-road speeds; but as with its less-powerful counterpart it’s still not too keen on being revved all the way out. It’s also worth a mention that - next to some of the more conventional turbocharged engines you might find in its rivals - it still doesn’t feel quite as keen to get to work.

Still, in typical Mazda fashion the CX-30 marks itself out as one of the sweeter-to-drive cars in its class - despite Mazda itself claiming that it’s not really supposed to have too much of a sporting edge. Nevertheless, the weight of its steering is very well judged and impressively precise, while its front end changes direction with a dash more spriteliness than is normal in this sector. Body control is fairly tightly controlled too, while ride comfort is good enough to escape serious criticism. It certainly errs more towards the firm side of things, and isn’t immune to thumps and bumps, but it generally feels nicely settled and composed, and isn’t overly susceptible to agitation.

Interior space isn’t too flash, though. Those sat in the rear will find headroom is merely ok, while taller adults will inevitably have to straddle the front seatbacks to fit comfortably. Bootspace only comes in at 422 litres, which isn’t bad but not necessarily outstanding either. A Volkswagen T-Roc, by comparison, has 455 litres.

That said, like its 3 hatchback compatriot, the design appeal and material quality of the CX-30’s cabin is very impressive. It’s a clean, minimal aesthetic, and one that helps mark the Mazda out as one of the classier cars in its class - even against the likes of the BMW X2 or Audi Q2. 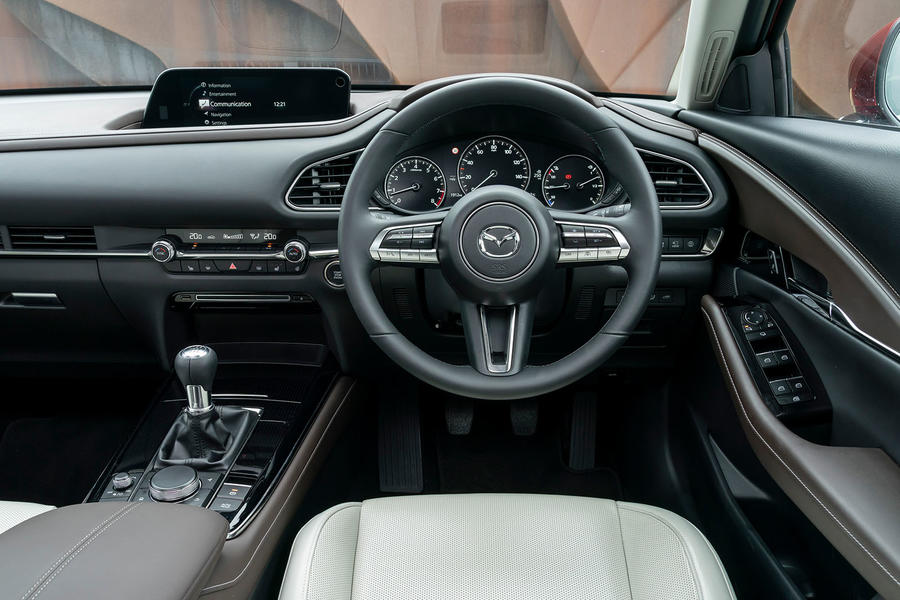 With the CX-30, Mazda has launched a genuinely impressive alternative to the likes of the more humdrum crossovers that seem to be so very popular in this day and age. It might not be perfect, but if it was between this and a Nissan Qashqai… Well, I know which of the two I’d go for.

It’s easily one of the most entertaining cars to drive in its class. Even when driven at a moderate pace it has a sense of integrity about its controls and the way it moves that helps elevate it above the current crop of largely mundane, tedious family crossovers. And for that alone, it deserves a nod of approval. 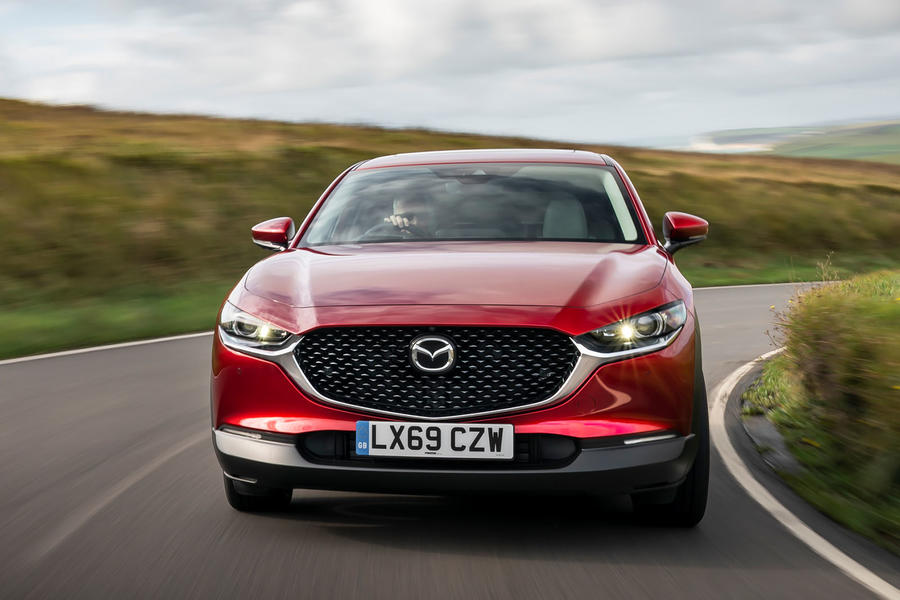 The cynic in me wonders

The cynic in me wonders whether Mazda made such a dogs dinner of the new 3's styling to push buyers towards this model, which of course they can charge more for. The extra light and visibility are very welcome, and VW should study this dashboard for how to make a safe, easy to use environment for the driver.

Paul Dalgarno has a good point

I bought a Mazda after reading favourable reviews from car magazines, but it was the worst car ownership experience I've had in over 30 years of driving. Of course I test drove the car first, but didn't compare it to as many rivals as I should've, and took it for granted that the statement in car magazines that Mazdas are reliable was true - but it wasn't for me, far from it.

Mazdas seem to always get high ratings when briefly tested in isolation, then when tested alongside the competition are religated to mid-table mediocrity or worse.

I went to a sneak preview of a new VW model a few years back with a rival motoring publication where an intern working for them told me that favourable reviews were given to car manufacturers splashing more cash on advertising. Yet another publication mysteriously rated the new Renault Clio above the current class leaders recently - but also splashes Renault advertising, even for their vans, within their car reviews and news.

The moral of the story is to try every car for yourself and read actual owner reviews in order to make the best decision possible.