From £23,1408
After a mid-life update the Mazda 3 hatchback gets new styling and technology. With this 2.2-litre diesel fitted it's a compelling choice
Open gallery
Close

A mildly updated version of the Mazda 3 hatchback and a rival for almost everything else in the C segment. Mazda names the Kia Ceed and Hyundai i30 as the cars it most wants to compete against, but in truth the 3 is taking on everything from the Ford Focus to the Skoda Octavia.

Until now, the 3 has been well received. We like its interior space, economical diesel engines and agile handling, but with the car having been on sale since 2013 - and the next-generation 3 not due until 2018 - updates were needed to keep it competitive. 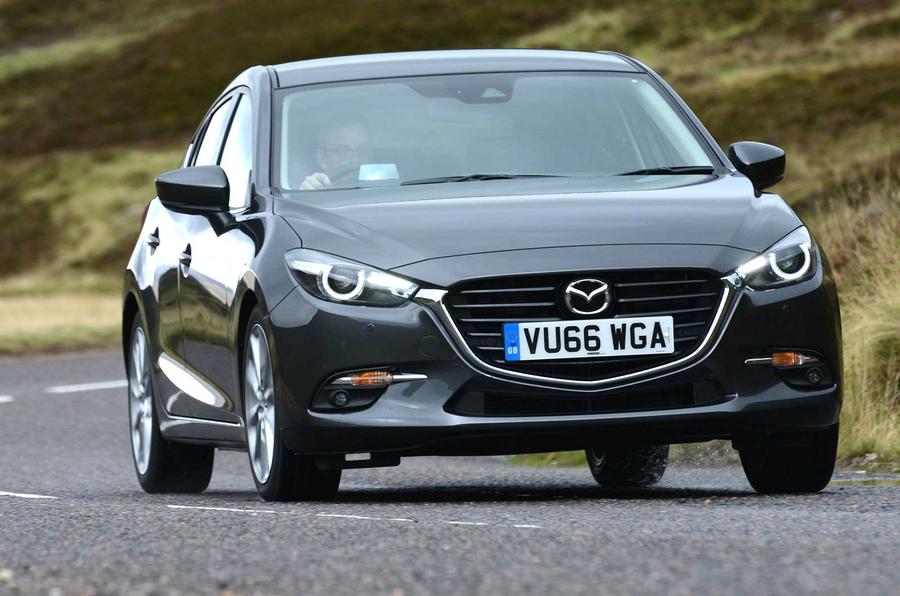 Changes to the car's styling are minor, including a new grille to put the car more in line with the CX-3 and facelifted 6 saloon, new LED headlights and a revised rear bumper, but it's in the chassis where most of the work has been done. Mazda's G-Vectoring Control (GVC) system is new here, although it already features in the 6. It delivers minute and imperceptible variations in engine torque to the front wheels, allowing the 3 to corner with more stability and reducing the need for mid-corner steering inputs from the driver. It's also claimed to improve ride comfort for passengers by reducing mid-corner lateral forces.

Also new are various interior upgrades: there's a new plastic trim around the window switches, larger door bins, a full-colour head-up display on Sport Nav models and a new leather steering wheel. Mazda has also done away with its mechanical handbrake in favour of an electric version.

The beauty of peak torque arriving at just 1800rpm is that this 2.2-litre diesel rarely feels out of puff. In fact, it feels plenty faster than its 148bhp peak power output would have you believe - especially considering its claimed 0-62mph sprint time of 8.1sec. That's partly due to a new turbo lag-reduction system called Transient Control. It means there's less waiting for the turbo to spool up and deliver power and give that delightful surge from low down in the rev range.

Mazda admits selling its GVC system to customers will be tricky, because if it's working as it should you won't be able to detect it. That said, the 3 feels keener to turn in to bends than before and once settled sticks to its line. On Scotland's undulating Highland roads it felt generally composed, engaging and grippy, although at speed the inconsistently weighted steering let it down. It also rides well on most surfaces, and only on really broken roads do you feel it shudder through the cabin. We couldn't detect any of the improved passenger comfort Mazda had talked about, though. 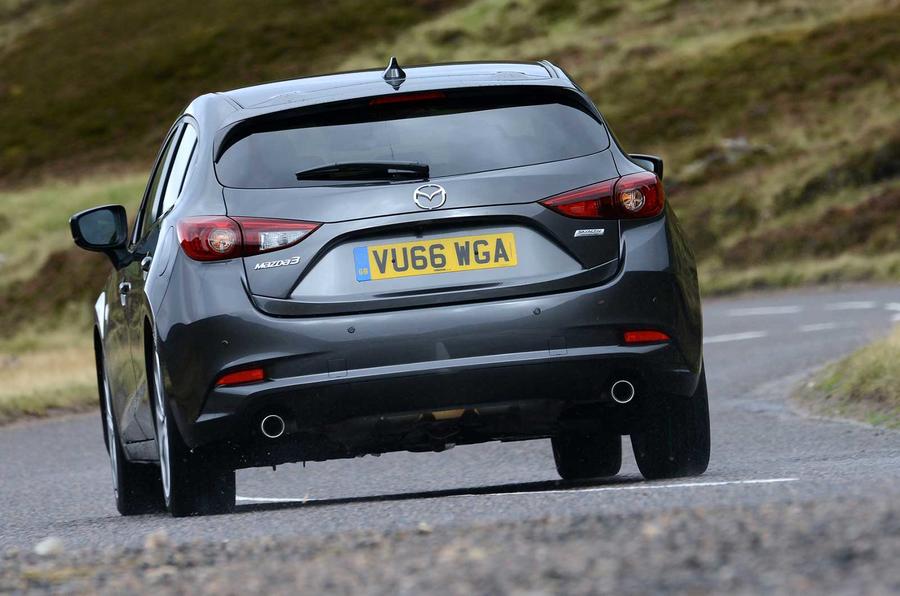 Elsewhere, very little has changed, which is no bad thing. This diesel engine is economical - an official combined economy figure of 68.9mpg is among the class's best, while CO2 emissions of 107g/km mean you'll pay just £20 in tax as a private buyer, or 21% BIK if you run this 3 as a company car.

Old problems remain, though. Most of the 3's rivals offer better insulation from wind and tyre noise, and while the diesel engine is quieter in this facelifted car (a new system dubbed Natural Sound Smoother aims to improve low-speed engine refinement), it's still fairly vocal.

The interior is more of a mixed bag. There's plenty of space in the front and rear and a fairly large boot, but some of Mazda's material choices remain questionable. While the top of the dashboard gets plush leather, things quickly revert to harsh plastics lower down. That new black plastic trim shows fingerprints very easily, too. The car's infotainment system is unchanged but remains easy to use and graphically rich.

If you're looking for a fine driver's choice in the family hatchback market, this updated 3 should be on your shortlist. The changes made with this facelift are minor, so current owners needn't rush to upgrade, but if you're not tempted by some of this segment's big sellers, such as the Ford Focus, Vauxhall Astra and Volkswagen Golf, then the 3 offers a rewarding and economical drive - especially in diesel form.

We might be tempted by a lesser spec than this range-topping Sport Nav model, though. Mid-range SE-L Nav models get rear parking sensors, heated seats, dual-zone climate control, AEB and cruise control and costs £950 less. 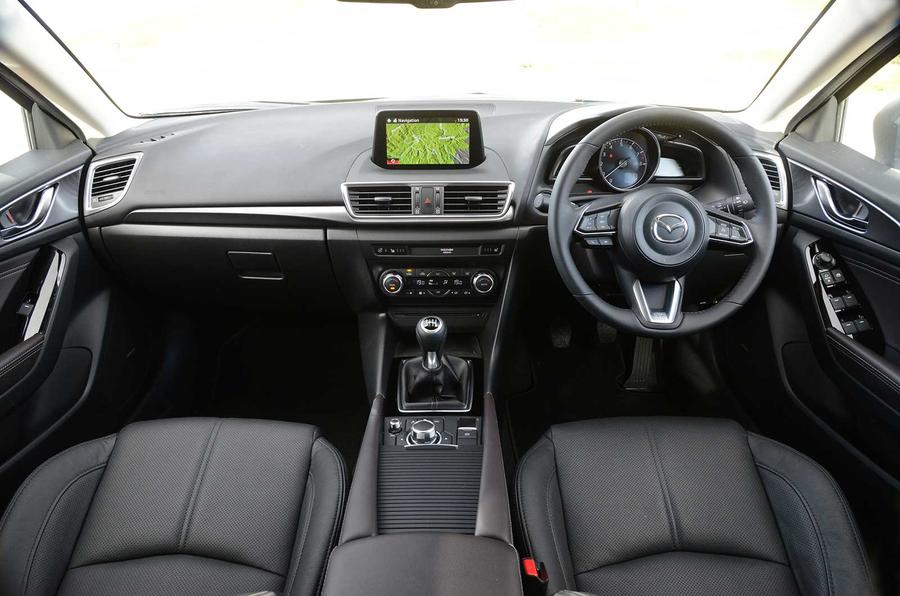 I test drove one when changing my car last and was impressed all the controls felt precise and consistent to me only didn't buy due to getting a better deal on a 6 estate. If they have managed to improve on the 2.2 diesel in my car then they will created a absolute peach on an engine! mine revs like a petrol pulls smoothly at any revs, sounds almost sporty and is nearly as economical as my previous V40 1.6D. Makes the Volvo and Audi diesels I had previously seem like cement mixers with rocks inside.
Mazda make cars with character and a consistent well engineered feel, quality mechanical movement and sound contributes to give the cars that very character which is being filtered out of German brands in their constant pursuit of quietness.
Bishop 5 October 2016

As an owner of the pre-facelift model, I still don't know what Autocar is talking about in terms of "at speed the inconsistently weighted steering lets it down"? I find the steering meaty, well weighted and linear - one might almost call it 'old fashioned'. Perhaps someone can explain more precisely what they are feeling when they sense this inconsistency of weighting.
LP in Brighton 5 October 2016

Low CO2 no longer matters much

With CO2 about to be no longer a determinant for VED, the advantage of an efficient engine will be diminished in the eyes of many consumers. I suspect this is going to make it harder for manufacturers to sell diesels, no matter how clean and efficient they may be.
View all comments (4)