From £60,2306
Stylish Levante is now available with an entry-level V6 petrol engine. We put it to the test on UK roads
Open gallery
Close

It’s a Maserati Levante with a Ferrari-derived petrol V6 under the bonnet, which sounds like a rather exciting prospect indeed. The only thing is, it’s not quite the bells-and-whistles petrol V6 you get in the Levante S. You know, the one that churns out a rather lovely 424bhp and 428lb ft.

No, this is more of a baby brother-type model. An entry-level petrol offering, if you will. It’s a car that has actually been around for quite some time, but it’s only now that Maserati has made the decision to offer it to buyers here in the UK.

That engine is essentially the same 3.0-litre twin-turbocharged V6 you’ll find in the Levante S, only with a few software tweaks to curb its power and torque outputs. In this application, it makes 345bhp at 5750rpm, while torque is brought down to 369lb ft and developed between 1750rpm and 4750rpm.

Otherwise, it’s largely identical to that more powerful - not to mention more expensive - Levante S. Drive is directed to all four wheels via an eight-speed automatic transmission, while air springs and Maserati’s ‘Skyhook’ adaptive dampers come as standard. The trim hierarchy is the same, with the standard Levante costing from £61,425, and the GranLusso and GranSport models being priced from £69,425.

Our test car came in the more athletically styled GranSport flavour, which adds - among other features - 20in alloys as standard, a more aggressively styled front bumper, sports seats and piano black exterior trim detailing. It’s a smart-looking SUV, this. 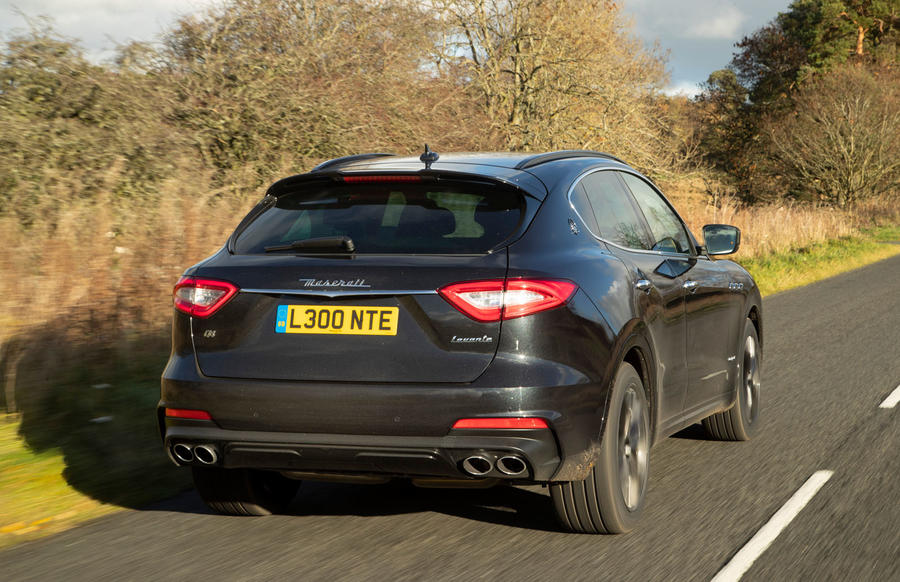 Out on the road, this particular Levante is a bit hit and miss - especially when you take into account the fact that Maserati views itself as a manufacturer of luxurious grand tourers as opposed to out-and-out sports cars. If nothing else, a grand tourer - even a 2.1-tonne, SUV-shaped one - should be capable of covering ground in a reasonably rapid fashion, while remaining composed and comfortable on all manner of road surfaces.

On both of these fronts, the big Maserati didn’t quite hit the mark. The occasions when the gorgeous yet demanding roads of our Northumbrian test route proved to be a bit much for the Levante were just a touch too frequent for this tester’s liking. Numerous undulations unearthed what seemed to be a fairly loose approach to vertical body control, and the seemingly constant heaving soon became tiring. Admittedly, switching the adaptive dampers to their sportiest setting went some way to remedying this, but next to a Porsche Cayenne - which Maserati considers to be a direct rival - the Levante just isn’t as composed or controlled.

The same is true of the way it goes around corners. Although the Maserati offers a genuinely impressive amount of traction through the twisty stuff, it isn’t quite as successful at masking its considerable weight as other performance-oriented SUVs are, and allows for a wee bit more lateral roll than you might like. The steering would likely benefit from being slightly more athletically weighted too.

And as for the engine? Well, it certainly sounds the part. Stray above 4000rpm or so and you’ll be treated to a mellifluous howl that has just the right amount of aggression to its timbre. It’s a wonderful soundtrack, and one that’s made all the more enjoyable by the fact that there’s no detectable synthetic aural trickery going on behind the scenes.

It’s a shame, then, that the Levante’s performance isn’t as intoxicating. There’s certainly a healthy amount of poke on offer here - overtaking manoeuvres on tight country B-roads can be dispatched with confidence - but it doesn’t feel as quick as its claimed 6.0sec 0-62mph time suggests. Throttle response isn’t particularly sharp, and there’s a degree of lag that needs to be endured before the engine really comes on song. That said, the wonderfully tactile metal paddleshifters make the task of keeping the engine on the boil easier, although the eight-speed auto ’box can be a touch hesitant to respond to requests for downshifts. Of course, as enjoyable as revving such a sonorous engine out is, do so frequently and you’ll pay for it at the pump. Over the course of our test drive, which combined those fantastic B-roads with reasonably lengthy dual carriageway stints, the Levante managed just 12mpg.

Ultimately, it was on those dual carriageways where the Levante felt strongest. Here, its not-so-convincing body control wasn’t as noticeable, and the cabin’s isolation was generally good. Those 20in alloys made for a secondary ride that was irritatingly busy at times, but on smooth surfaces the Levante felt like it was much closer to being in its element. 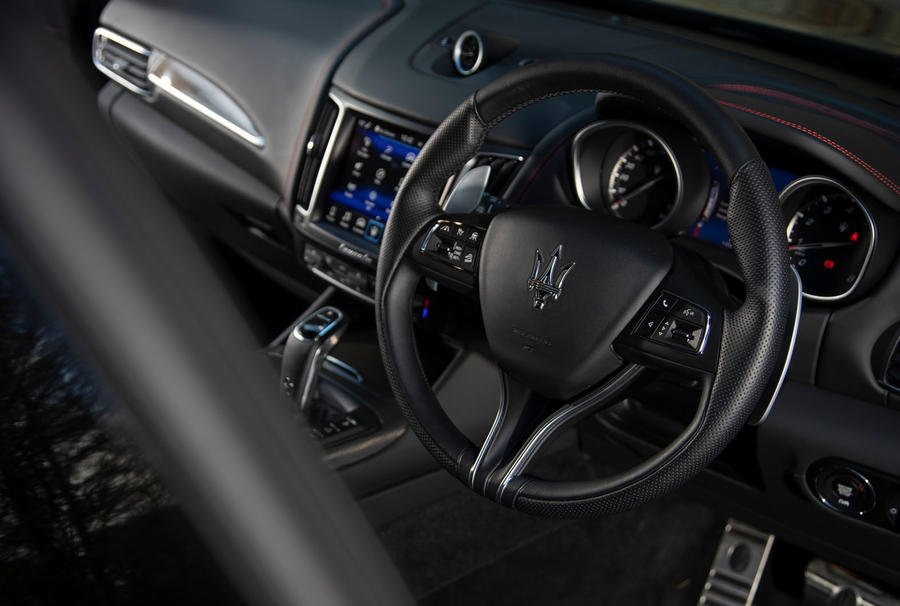 There are certainly better performance SUVs out there, but that’s not to say the Maserati Levante doesn’t have its place. It’s a fine-looking thing, and the noise from that V6 is a hugely endearing part of its character. Its cabin is suitably plush, and there’s a usable amount of room in the second row too.

Objectively, a Porsche Cayenne S - which, at £68,330, is only a shade cheaper than our GranSport test model - is a better car. Dynamically, it has the Maserati licked. But does it offer the style or flair of the Italian? Not really, and for those who just fancy the idea of owning a Maserati, that’s likely the only justification they’ll need. 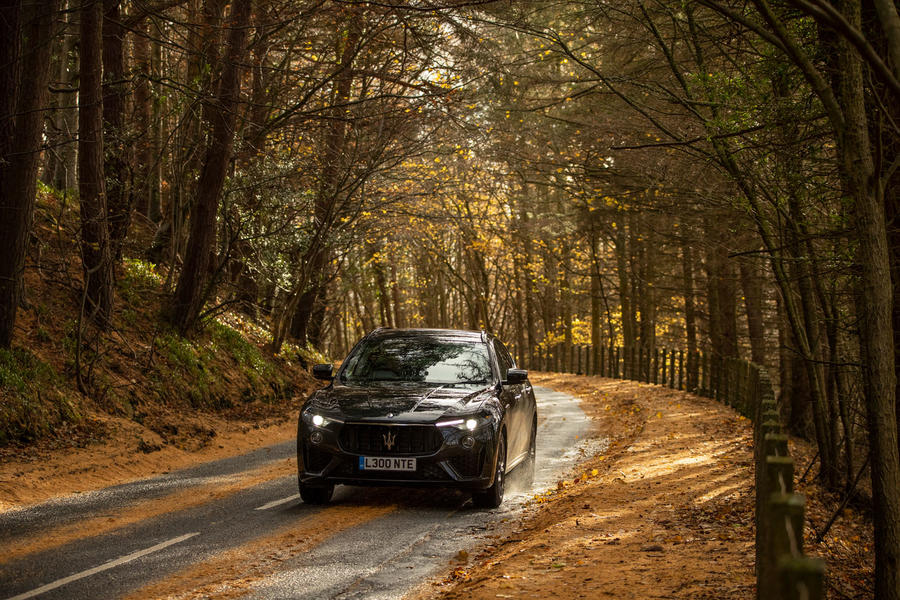 There is a lot wrong with

There is a lot wrong with cars when they have 345 bhp and don't feel like they can crack 60 mph in 6 seconds.

If cars were really getting more efficient as generally claimed, you would need less and less power to get the same performance.

There is a lot wrong with cars when they have 345 bhp and don't feel like they can crack 60 mph in 6 seconds. If cars were really getting more efficient as generally claimed, you would need less and less power to get the same performance.

Apart from which it's probably alright.

Apart for the colour. It's Italian, it shouldn't look as if it's trying to hide, or maybe it's ashamed to be seen.

I like all three current Maseratis', they are a bit different and better for that. Trouble is none of them have much room for your left foot. Their older cars did not have this issue but the modern cars suffer from the RHD conversion in this regard.