From £60,2308
Most extreme Maserati SUV is as characterful as it gets thanks to a Ferrari-derived V8
Open gallery
Close

In a nutshell this is the maddest, baddest and fastest Maserati SUV a (not inconsiderable) sum of money can buy. With the thirst for high-end, high performance off-roaders showing no signs of being slaked, it was only a matter of time before Maserati, already late to the SUV party, jumped on the bandwagon with a rival to the likes of the Porsche Cayenne Coupe Turbo and Range Rover Sport SVR.

So, what have we got? Well, in the very simplest of terms it’s the Modenese maker’s slightly underdone Levante with a Ferrari engine crammed under the bonnet. In fact, it’s something of a Fiat Group team effort, because the Prancing Horse’s V8 motor is mated to a version of Alfa Romeo’s Q4 four-wheel drive transmission. However, Maserati has made been able to put its own stamp on all these bits, creating what promises to be one of the quickest 4x4s by far.

The engine is the same Maranello-built 3.8-litre V8 as used in the Levante GTS, and like that car it gets its own Maserati extras. That means new camshafts and valves, plus redesigned cylinder heads, pistons and con rods. Further changes include a tweaked engine management system and a pair of twin scroll turbochargers. The result is a healthy 574bhp at 6250rpm and 538lb ft of torque, all of it available between 2500rpm and 5000rpm.

To cope with the extra power the chassis has been treated to some upgrades, including a new Aero 2 mode for the air suspension that lowers the ride height by 35mm. There’s also a new Corsa driving mode that stiffens the springs and dampers, as well as loosening the ESP’s grip a little, sharpening the throttle and putting the eight-speed automatic gearbox on high alert.

As with the GTS, the Q4 four-wheel drive essentially runs in rear-wheel drive most of the time, only sending torque forward when it senses slip, something it can do in as little as 150 milliseconds. Maximum torque split front to rear is 50/50. Adding to the Trofeo’s credentials as a ‘proper driver’s car’ is the inclusion of a mechanical limited slip differential for the rear axle. To make the most of this, the Levante runs the latest generation of ESP with an enhanced algorithm that takes into account pitch, yaw, steering wheel angle, road speed, throttle and gear to enhance agility by priming the systems to ‘think’ ahead, rather than reacting once the car has started to slide.

The final change to the chassis is the option (fitted to our test car) of vast 22-inch forged alloy wheels that are wrapped in specially developed Continental rubber, with a 265 section at the front and a steam roller 295 at the rear.

Externally, the Trofeo is marked out by those huge wheels and some bonnet vents, plus a smattering of carbon fibre aerodynamic additions including the now de rigueur ‘F1-inspired’ rear diffuser and a pair of vanes for the front bumper that ‘create a sense of stability’. So not really that aerodynamic then. Oh, and the bonnet has a pair of small vents cut into it, which are a subtle but effective indication of the car’s potential. Yet despite the inclusion of all these lightweight extras the Trofeo still tips the scales at a creaking 2170kg.

Climb aboard and you’ll discover a pair of high-backed sports seats with ‘Trofeo’ logos stitched into their headrests, plus yet more carbon fibre, this time finished in a tasteful naked weave. The soft leather used for the seats and dashboard is also first rate, so it’s a shame some of the plastics and switchgear (the cheap feeling, Mercedes knock-off single wiper and indicator stalk, for example) aren’t quite up to the £124,900 price tag. 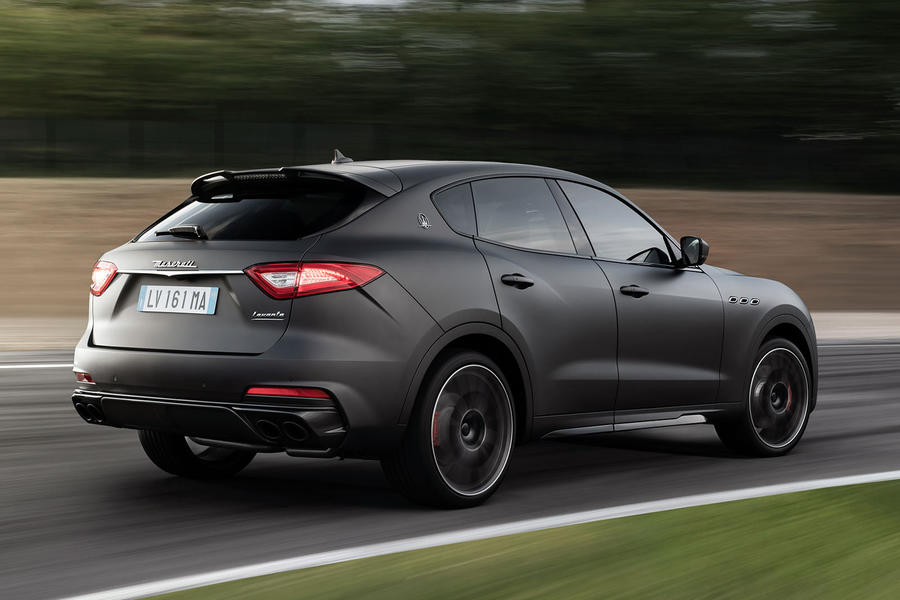 Frankly, the Levante Trofeo could handle like it had two left feet, but you’d be willing to forgive it because of that Ferrari-developed and built engine. Of course it delivers plenty of performance (0-62mph in a launch control assisted 4.1 seconds, as you ask), but it’s the noise that really smears a grin across your face.

This a traditionally Italian engine, filled to its crackle red cam covers with character. Yes there’s a sports exhaust with an active valve that opens in Sport mode for the full operatic effect, but even then the sound is cultured and just the right side of noisy - there’s none of the ostentatious bombast you get with Range Rover Sport and Jaguar F-Pace SVRs. It snarls and howls under load, then cracks, pops and burbles on the overrun. It’s glorious tenor never more than a right foot flex away.

Peak torque comes in at just 2,500rpm, but there’s a decent chunk of it below even this crank speed, meaning the Trofeo covers ground at a fair old lick, easily feeling as fast as Porsche Cayenne Coupe Turbo. It’s the sort of effortless, lag-free urge you expect from turbocharged engines these days, but while the torque curve is flat, the V8’s performance still builds excitingly, crescendoing with a snarling rush of revs over the last 1,000rpm or so.

Happily, the engine is mated to the familiar eight-speed ZF auto, which delivers smooth and crisp shifts in auto mode, yet reacts quickly to the long steering column-mounted paddles - Maserati claims that in Corsa mode the changes take just 150milliseconds.

Corsa also puts the chassis in its sharpest configuration, with the air springs lowered by 35mm and stiffened by about 20 percent. The Q4 transmission is also primed to stay in rear-wheel drive mode for longer, the ESP is relaxed, throttle is sharpened and the exhaust flaps are fully opened.

Even in its firmest configuration the Levante copes well with some of the torn and ragged tarmac we encounter - this is a more forgiving setting than the Cayenne’s Sport+ mode. Yes this means the Maserati doesn’t quite have its German rival’s cast iron control in extremis, but the trade off is more approachable handling.

It’s still a big car, and the mass eventually tells, but driven as briskly as you dare over give-and-take roads the Trofeo is surprisingly entertaining. The algorithm enhanced ESP subtly braking individual wheels (it’s almost imperceptible) to rotate the car into a corner and quell understeer, while the Skyhook adaptive dampers give the Levante the feeling it’s breathing with the road, rather than pummeling it into submission.

Push really hard and the Maserati struggles a little, getting a touch floaty over big bumps and rolling onto its outside rear wheel when really loaded up. However, in the wet conditions we experienced it’s possible to edge the tail out on the exit of slower corners if you’re greedy with the throttle. The rest of the time the Levante simply digs in and goes, the transmission quickly and seamlessly firing torque forward for a rapid corner exit. You have to be precise and neat - this isn’t a car that likes to have it’s attitude shifted mid-corner - but there are real rewards to be had here.

Arguably the weakest link in the dynamic make up is the steering, which quick and precise enough, but suffers from slightly artificial weighting and feedback in Sport and Corsa - it’s feels more natural in Comfort. Speaking of which, knock everything back to its quietest and softest and the Levante is a composed and comfortable cruiser, those air springs adding just the right amount of waft to proceedings.

The rest of the package is as before, which means the Maserati just trails the German competition for overall quality, with some of the plastics and switchgear still feeling a bit FCA hand-me-down and the touchscreen infotainment looking and operating like a unit that’s a generation behind the best. Yet the first rate leather, that exposed carbon fibre weave trim and the impressive finish all help lift the ambience - the Levante still feels a bit special. It’s roomy enough too, even if the rising waistline and smaller rear windows do make the rear feel a little gloomy. Bright red trim like our test car’s is a must. 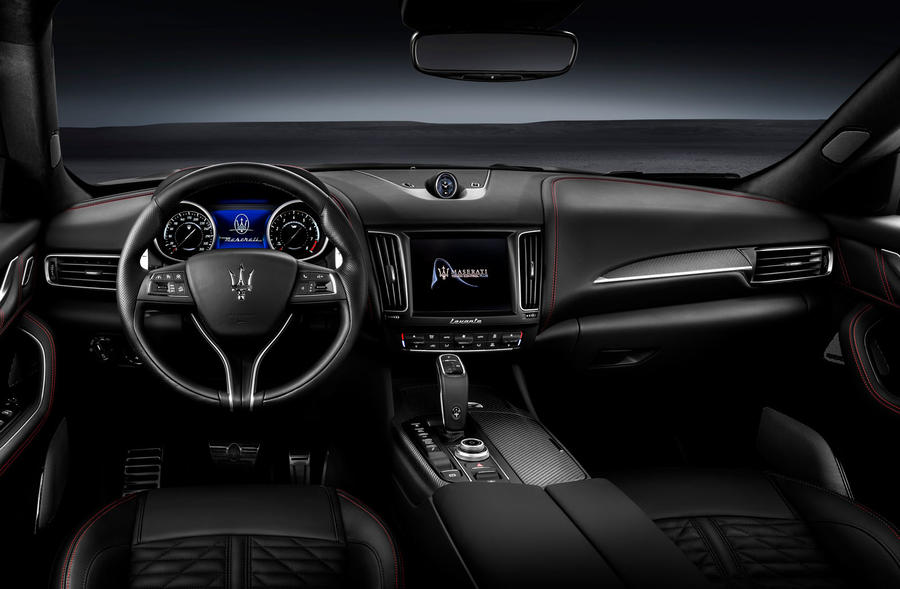 In terms of outright ability and true premium appeal the Levante Trofeo is just shaded by the Porsche Cayenne Coupe Turbo - but then what isn’t in this class? Yet while the Maserati is a touch softer and less controlled than the Cayenne, it’s more approachable, on the road at least.

Keep in the back of your mind the car’s mass and size and you can cover the ground at an alarming rate. And then there’s that glorious masterpiece of an engine, that packs a real punch and musicality - it’s almost worth the price of entry alone. It’s still a flawed car, the Levante, but it has a charm and personality that’s rare in this type of car. Sure it’s not cheap, but as a characterful alternative to the usual suspects it deserves a closer inspection. 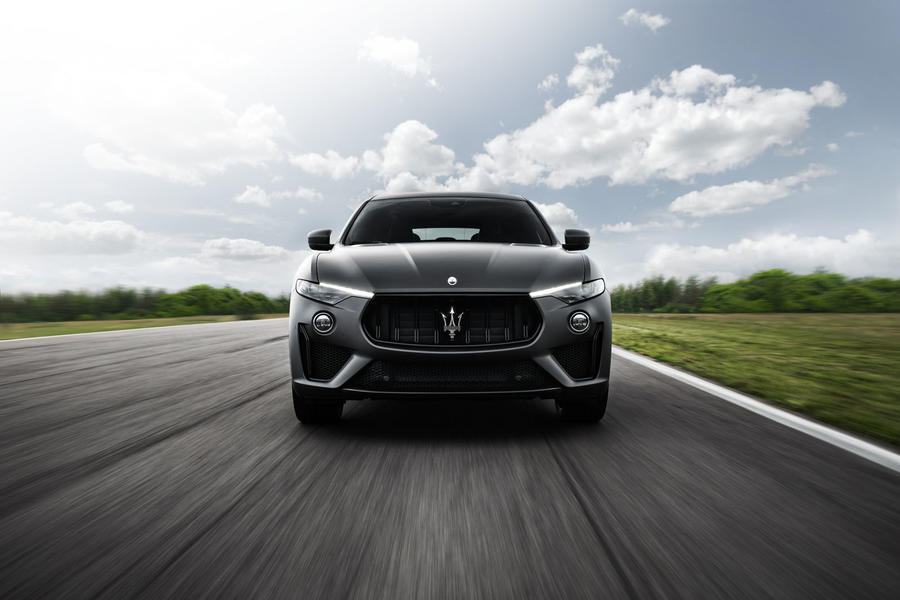 This and that disgusting Urus

This and that disgusting Urus - could there be cars less in tune with the zeitgeist, and simultaneously less true to the spirits of their makers?

I stopped reading about the Urus when they got to the 'digitized' engine sounds coming out of the speakers. That is a concept that in car terms, is pure evil.

In fact whenever a car boss uses the term 'emotion', you know that some disgraceful fakery is about to be unleased.

Seems like a slow expensive ugly Italian copy of a Tesla Model X and something that will contribute massively to global warming 13.7 mpg. Shouldn't be allowed to be on sale in the UK.
James Dene 11 July 2019

The so-called Climate Crisis is seriously overdone. Nonetheless, there is a prevailing mood for attacking ultra high emissions vehicles, overly large vehicles, vehicles capable of "excessive" speeds (read, bragging speeds never actually usable), etc. This one ticks all the boxes and serves only to attract the attention of the unwashed mob. More of these crass vehicles and we'll just see an acceleration of spiraling taxes and charges on otherwise ordinary transport.

The so-called Climate Crisis is seriously overdone. Nonetheless, there is a prevailing mood for attacking ultra high emissions vehicles, overly large vehicles, vehicles capable of "excessive" speeds (read, bragging speeds never actually usable), etc. This one ticks all the boxes and serves only to attract the attention of the unwashed mob. More of these crass vehicles and we'll just see an acceleration of spiraling taxes and charges on otherwise ordinary transport.

You are absolutely right, we can't really justify vehicles like this any longer, way too powerful and far more performance than is needed on public roads. Some elements of the motor industry do themselves no favours, how can they be so short sighted?