From £60,2308
The Levante SUV has created the foundations to allow Maserati to grow, and now it has a petrol engine, but does that make it a true Maserati?
Open gallery
Close
by Dan Prosser
19 December 2017
Share

With the arrival of the Levante S, Maserati’s SUV is available for the first time in right-hand drive markets with a petrol engine. At launch, the Levante was offered in the UK only with a V6 diesel, which, as Maserati itself admits, undermined one of the marque’s core brand values: a stirring soundtrack.

The Levante was always intended to be Maserati’s volume seller. Since going on sale in 2016, the SUV has just about doubled the company’s output, thanks largely to that relatively frugal diesel offering. But there is undoubtedly a hardcore of potential Levante buyers in the UK who just couldn’t reconcile that famous trident badge, and all the connotations of luxury, performance and desirability that went along with it, with the agricultural rumblings of a diesel motor. Now, they don’t have to.

For this 2018 model year refresh, Maserati has introduced two new model lines. Having chosen between the Levante diesel and Levante S, buyers can then upgrade to either GranSport or GranLusso specification, the former adding sportier design touches - black body trim and well-bolstered sports seats - while the latter tends towards luxury, adding chrome and body-coloured elements externally and wood trim rather than carbonfibre within the cabin.

Other changes include a switch to electric power steering, as well as a new suite of level two advanced driver assistance systems, including lane keep assist and road sign recognition.

How important is the Levante to Maserati? Given that 90% of buyers have never owned a Maserati before, it seems the Levante is set to form the basis of the marque’s entire business strategy for years to come. 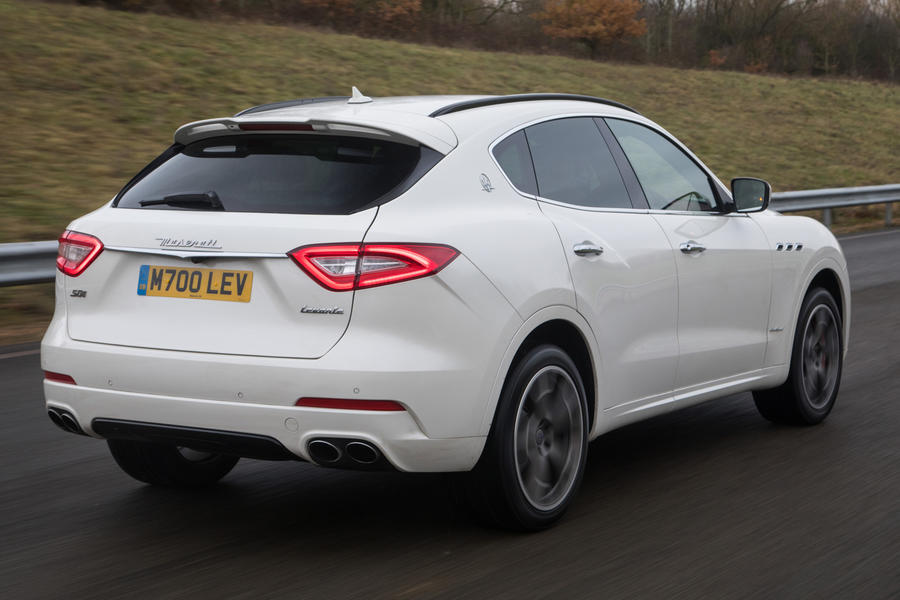 The Levante S has been designed to straddle the line between performance and luxury. That means it should be refined, quiet and comfortable one moment, then fast and athletic the next. That it makes a decent job of both without truly excelling at either demonstrates how squarely Maserati’s engineers have nailed their brief.

All Levantes sit on air springs as standard, but early models tended to ride with a faint edge - a sort of gentle spikiness, like wrapping your fingers around a conker husk - that never went away at any speed. Now, though, the Levante S rolls along the road with a little more fluency, although it doesn't quite pull off the Porsche Cayenne’s trick of ironing out the road surface. The frameless, double-glazed windows keep wind noise down, while the petrol V6 only makes itself known with a cultured, subdued yowl from the exhaust tips.

The eight-speed automatic gearbox, meanwhile, is smooth and unflustered at normal speeds, but if you tap it into manual mode you can use the elegant aluminium paddles to shift up and down, the ratios swapping in and out quickly and precisely, but without the snappiness of a dual-clutch auto.

Pressing the Sport button once primes the powertrain: faster gearshifts, a more aggressive throttle map and a much livelier soundtrack. The engine is sharp and responsive, revving freely and with a rush of energy that you just don’t get from the diesel. The Levante S feels quick without being violently accelerative, Cayenne Turbo-style, but with its more appealing soundtrack and higher rev limit, the petrol V6 is undoubtedly a better fit than the diesel.

Press the Sport button again and the car drops by 20mm and the dampers tighten up. Even on winter tyres, the Levante S handles with control and precision, carrying good speed through corners and remaining relatively flat-bodied and composed. It isn’t in any way exciting or engaging to drive the way the smaller, similar-priced Alfa Romeo Stelvio Quadrifoglio can be, but you don’t find yourself wishing for more front-end bite or any mid-corner adjustability. Dynamically, the Levante S is very well judged.

The outgoing hydraulic rack was never the most detailed or satisfying steering system out there, so it’s no great shame to see it replaced by an electrically assisted helm here. The new system is well weighted, crisp and very precise, so at no point do you find yourself pining for that old set-up.

It almost seems absurd to suggest Maserati Levante owners will ever venture off road in their Maserati SUVs, but to its credit, the car does have enough off-road capability to climb up muddy, rutted tracks and wade through two feet or so of water. In normal conditions, the four-wheel drive system sends all drive to the rear axle, but if they begin to slip, or if you press the off-road button and lift the ride height, it can divert half of that to the front axle.

Aside from one or two pieces of interior trim that do feel somewhat mass-produced, the Maserati Levante’s cabin is basically very good, with high-grade leather and a real solidity to the build quality. It mightn’t have the overall grandeur of a Range Rover Sport, but the Levante still feels like a fine thing from within. 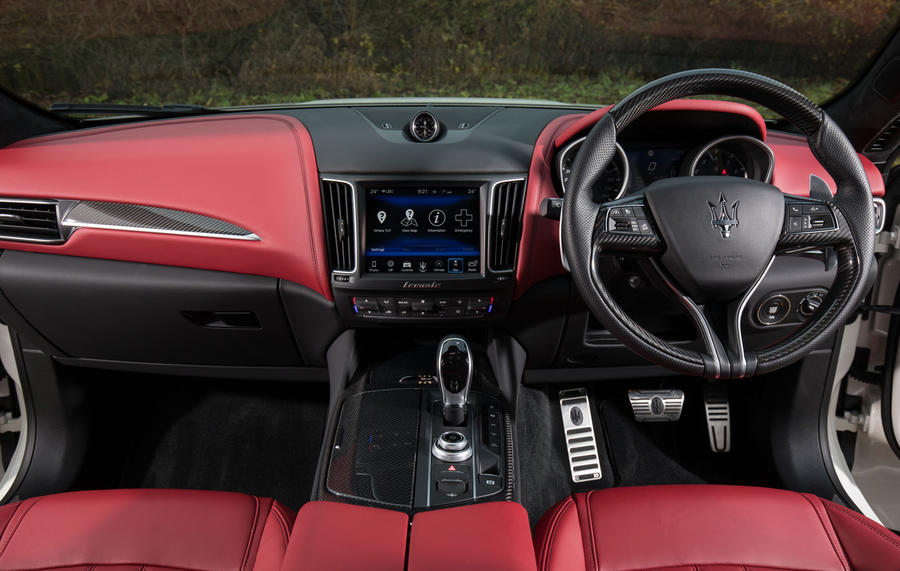 If you’re sold on the exclusivity and romance of the Maserati badge, there’s no particular reason not to buy a Levante S. Other SUVs may be more luxurious still or even better to drive at speed, but the Levante offers a broad spread of talents, backed up by a certain degree of style. And in the Levante S, Maserati’s first SUV finally has an engine that lives up to the trident badge.

Starting at £70,755 - rising to £76,995 for either the GranSport or GranLusso models - the Levante S is a little more expensive than the similarly powerful Porsche Cayenne S, but it's fractionally cheaper than a Range Rover Sport with its much less powerful 334bhp supercharged V6. 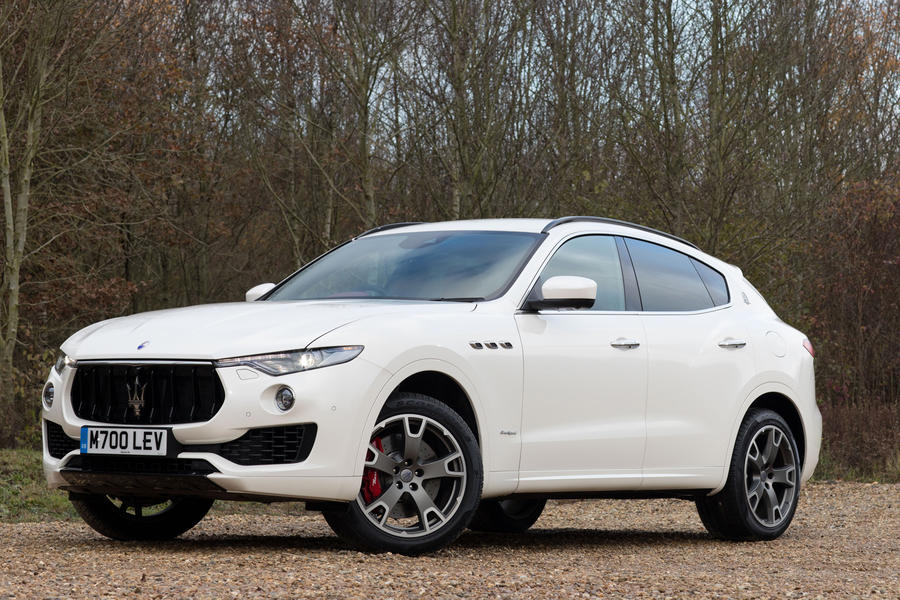 @giulivio: you are absolutely right about the engine...

...but I agree also with @Pierre: rather uninspiring, and its poor sales numbers confirm it.

That too long engine hood gives it a somehow cartoonish-drawn coupe appearence and those (albeit big) rims seem strangely microscopic in the context of this pseudo Alfa Romeo Stelvio design with bad proportions.

Just my opinion though -- P.S. Such a pitty, while the interior is way better resolved.

Dull, even. Apart from the name, and the "OMG I stood next to a Ferrari in the lift" factor, what does it offer?

The cylinder heads are Ferrari (essentially the same as the Alfa Quadrifoglio and a shortened version of what you'd find in a 488 or Portofino, as well as a V8 Maserati). However the cylinder block is a 60º Chrysler Pentastar block, unlike the Ferrari - built 90º unit in an Alfa.