From £60,2308
Get ready to trade in your diesels: Maserati’s luxury SUV finally gets the engine it’s always needed
Open gallery
Close

It’s the new Maserati Levante – or rather the updated ‘2018’ version of a car that made us all wonder, only last year, if the introduction of a luxury SUV was still such a risk to the reputation of a European sports car maker. It’s time to get real. When that’s a risk so many are taking, how can it be?

The Maserati Levante has already become the biggest-selling car that the Modena-based firm makes, reaching 25,000 owners around the world already in its 15-month existence in production – and for a company that only sold 32,000 cars in total in 2015. This car looks like becoming the bedrock of Maserati’s business for years into the future, just as the Porsche Cayenne and Porsche Macan now are for Porsche. As Maserati’s ex-CEO Harald Wester used to say: “The bigger risk would have been not to make it.”

In light of that, keeping the Levante competitive with its rivals is clearly of paramount importance – and that’s not achieved by sitting on your hands. Which is why, only 18 months after the car was unveiled, we’re already seeing a model-year update. The revision mostly adds safety and convenience features, although there are changes to the car’s styling and trim range hierarchy as well.

The engine range is unaltered – at least in a global sense. There’s a choice between 3.0-litre V6 twin-turbocharged petrol engines of either 345bhp or 424bhp, and a 3.0-litre V6 turbodiesel with 271bhp. But whereas until now only the V6 diesel engine was available in right-hand drive markets like ours, Maserati has finally made the V6 turbo petrols available in right-hand drive as well. For now, Maserati UK will only offer the 424bhp Levante V6 S alongside the 271bhp diesel – but the less powerful petrol could also come in time. 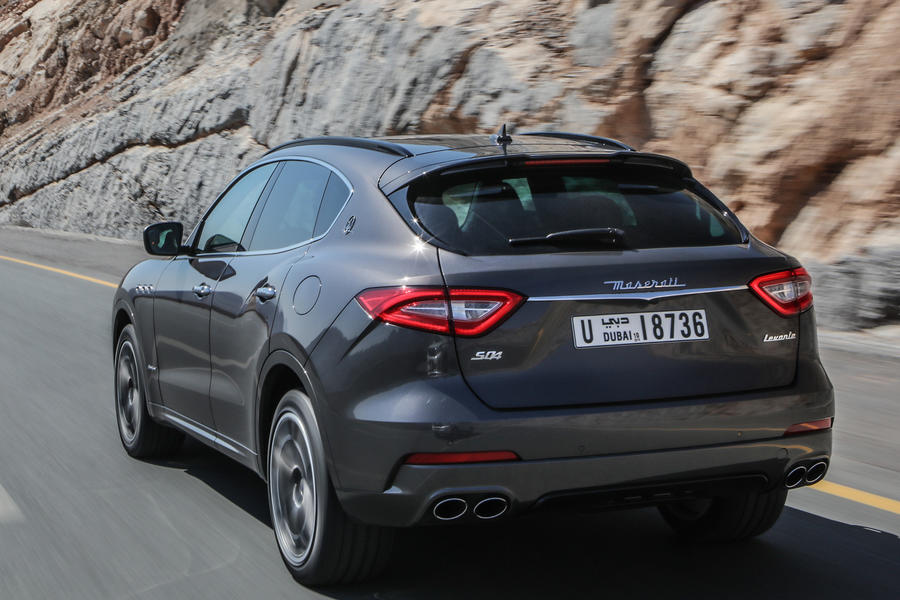 The Levante range now starts with an introductory model before progressing upwards to either luxury-minded ‘GranLusso’ specification or performance-styled ‘GranSport’. The former gets 19in wheels as standard and its exterior styling has extra chrome trimmings, while the latter has 20in rims, ‘piano black’ exterior trim and red brake calipers.

The car’s elegant frameless doors now have ‘soft-close’ motors on them: that’s added convenience feature number one. Once you’re inside, you’ll find the Levante’s cabin is wrapped in smooth, colourful leathers, and that it’s got very comfortable front seats – with slightly less room in the back than some rival SUVs offer, but still plenty for most adults to get comfortable in. Just as before, where the Levante’s interior impresses, it looks and feels very rich and expensive; but where its quality and sophistication disappoints (on the column stalks and some of the switchgear, and in the graphical presentation of the infotainment system particularly), it lags a long way behind the likes of the Audi Q7 and Volvo XC90.

Maserati has added several active safety features to the car, among them a ‘highway assist’ system that works to automatically keep it in its lane and to maintain the gap to the car in front. There’s also a new lane keeping assist system and a traffic sign recognition system: the kind of features that Levante buyers have doubtless been asking for since they’re available on its various rivals.

Delivering some of those features, however, has meant moving the Levante from hydraulic- to electromechanical power steering. The car’s new steering system is lighter than the old one at parking speeds, but has the tuning potential to be made heavier when you put the car into its sportier driving modes.

In ‘normal’ mode, the Maserati Levante rode Dubai’s smooth stretches of tarmac with the compliance and most of the isolation you’d hope for in a car of this type. It takes two presses of the ‘sport’ button to properly prepare the car for a briskly taken series of bends: the first one makes the powertrain ready, the second tells the car’s standard air suspension to hunker down on its haunches by 20mm and to firm up its ‘skyhook’ adaptive dampers, while it also ramps down the steering’s assistance level.

Having done that, the Levante feels much more taut, accurate and keen-handling than the luxury SUV norm, and unmistakably like a true driver’s car. It doesn’t quite have the uncanny cornering balance of a Porsche Cayenne but it’s not far behind, and while the new steering set-up feels slightly less honest than the old one, it’s well-paced, has useful weight and isn’t without feel.

All of that would mean little, of course, if UK buyers wanting a sporting luxury SUV continued to be stuck with the Levante’s plain old VM Motori diesel engine; but having the Ferrari-developed twin-turbo petrol engine in this car instead makes it so much more enticing to drive. The 424bhp 3.0-litre unit works up a head of steam through a little bit of turbo lag, but not a dismaying amount. But it really pulls keenly and revs freely once it’s on song, and sounds both authentic and sweet through Maserati’s active sports exhaust. Unlike the diesel, the V6 petrol needs no speakers hidden behind the rear bumper to produce its vocals performance. 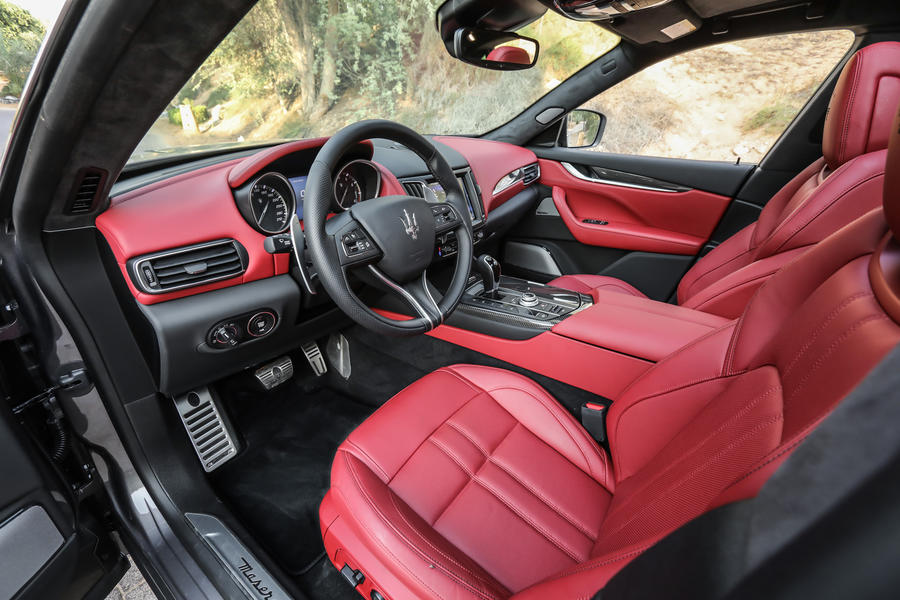 If you liked that idea last year but were ultimately put off as a disadvantaged right-hand-drive customer, you should certainly consider it afresh. Because, praise be, what’s shaping up to be the most important Maserati in decades seems to have negotiated its awkward early years and blossomed into the car many probably hoped it might be from the off.

As a luxury SUV, the Maserati Levante remains one of big attractions and a few telling disappointments. But as a driver’s car, as much as it matters to British buyers at least, it’s finally been given the engine its chassis deserves - and that feels like a much-needed coming of age. 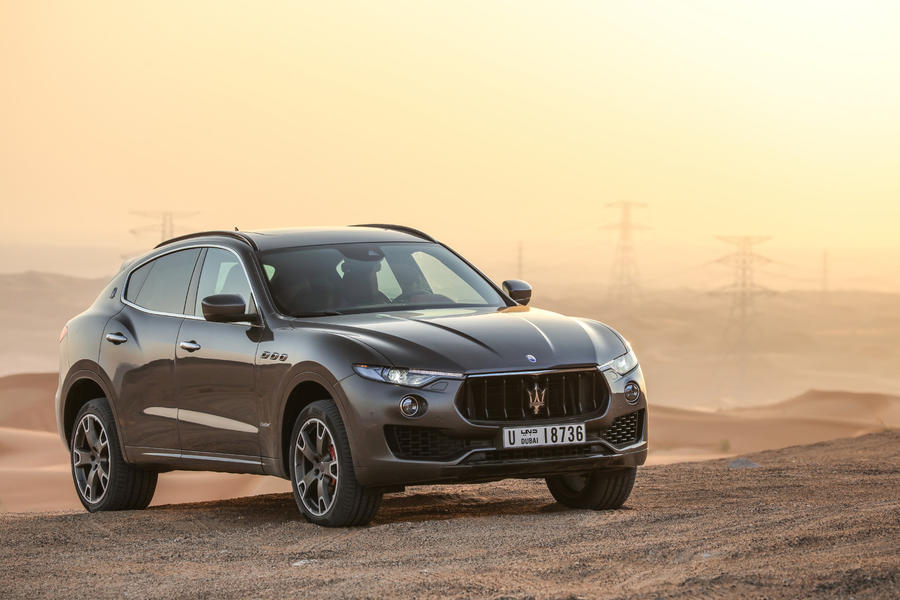 and it's jumping erratically around with random saving. Sorry for the double post.

suv? My backside. Jacked up small sports estate, a bigger version of those awful jacked up hatchbacks. Yes I don't like them, it's not rational or anything. A personal distaste for pointless fashion items.

The levante is Massively over engineered to overcome the issues with the raised ride height to give it sportiness. It even lowers by 20mm because of this to help with handling. There is a much better solution to this. Over successive generations it should gradually be lowered to be more sporty evolving become an estate, should fashion permit.

the U bit of suv is missing largely, the S bit is very emphasised. SV anyone?

suv? My backside. Jacked up small sports estate, a bigger version of those awful jacked up hatchbacks. Yes I don't like them, it's not rational or anything. A personal distaste for pointless fashion items.

The levante is Massively over engineered to overcome the issues with the raised ride height to give it sportiness. It even lowers by 20mm because of this to help with handling. There is a much better solution to this. Over successive generations it should gradually be lowered to be more sporty evolving become an estate, should fashion permit.

the U bit of suv is missing largely, the S bit is very emphasised. SV anyone?