From £52,8856
The Italian saloon gets its most comprehensive update yet, but is that enough to make it a match for rival offerings from BMW and Mercedes?
Open gallery
Close

This is the most extensive updating yet of a model that has now been on sale for more than four years. Maserati has upgraded its best-selling model in previous seasons with a much-improved infotainment system (necessitating a partial redesign of the dashboard), adaptive cruise control with a stop-and-go traffic jam function, forward collision warning, autonomous emergency braking and blind spot monitoring. The lower-powered petrol V6 twin turbo’s power output has previously been increased from 326bhp to 345bhp, too.

The 2018 model year changes build on this with electronic driver aids and safety systems enabled by the substitution of electric power steering for the previous hydraulic system, the car now self-steering to remain in lane. The Ghibli’s nose, grille and tail have been redesigned, there’s a power upgrade for the petrol S, adaptive LED headlights are standard and the range has been restructured similarly to the Maserati Levante and Maserati Quattroporte’s. Buyers are now able to choose a base model, or versions with either the comfort GranLusso or performance GranSport pack.

Cars with either of the trim packs are the same price. Key ingredients of the GranSport pack include Maserati’s adjustable Skyhook electronic dampers, paddleshifts, racier seats and more sporting design details. The GranLusso has conventional suspension but provides soft-close doors, 12 rather than six-way electric front seats, electric adjustment for the steering wheel and pedals and interior trim that includes silk inserts by fashion designer Ermenegildo Zegna.

Up to now the Maserati Ghibli has been selling at an 80:20 diesel to petrol ratio in the UK, but Maserati now expects a 50:50 split. The 247bhp VM diesel remains unchanged, the base petrol V6 turbo provides 344bhp and the S version a thumping 444bhp, but in a car that weighs more than 1800kg. 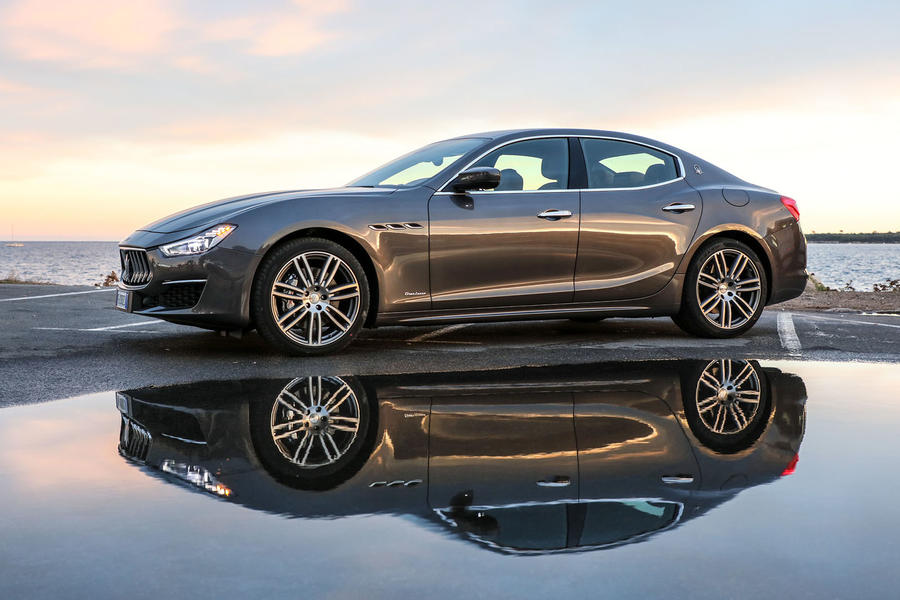 The Ghibli remains elegantly shapely, Maserati’s designers wisely deciding not to fiddle too much, but it’s the lush cabin that is this perhaps this car’s strongest draw. An interestingly sculpted, leather-sheathed dashboard, sumptuously upholstered seats and an aura of fine Italian craftsmanship make for a particularly inviting environment, as has long been the Maserati way. The dashboard looks more contemporary now that there’s a decently scaled infotainment system at its centre, but the increasing proliferation of configurable TFT instrument screens and head-up displays means that Maserati remains adrift of some rivals in electronic display terms. That said, the Maserati Ghibli’s twin major dials make a pleasing sight.

The potent hum of the petrol V6 at idle is pleasing too. It has quite a chunk of Maserati to catapult, the S engine not quite energising the Maserati Ghibli in the way that 444bhp might imply, although you’d hardly call it slow. The eight-speed ZF gearbox heightens its urge to surge, as does the V6 soundtrack. It lacks the mellifluous roar of Alfa’s long departed V6, but it still makes mildly beguiling sounds. Both GranLusso and GranSport are mechanically identical bar Skyhook, which was nevertheless fitted to our GranLusso test car. This continuously variable damping system is vastly more competent than when it first underpinned a Maserati, but it’s a surprise that the company hasn’t attempted to improve the Ghibli’s dynamics, which weren’t its strong point four years ago and certainly aren’t today.

Body control is a bit loose in comfort mode, the car heaving over crests and sinking hard into dips while serving a slightly pattery ride. Choose sport and it subtly tightens to lightly limit roll, but with an extra helping of patter. The same system in the diesel provides more contrast between these modes, the back axle settling less easily, too. The diesel turns untidier sooner, its manners better suited to a less ambitious pace. The petrol Ghibli is a more enjoyable drive for the keen and better confirms Maserati’s claim that the new electric power steering is superior to the outgoing hydraulic system. Only a little low-speed on-centre slack betrays this volt-powered system, whose rim weight rises to 0.8g’s worth of cornering force compared to the previous system’s 0.4g. Of actual road feel there isn’t much, but that’s typical today.

Frustratingly, the most accomplished and enjoyable Maserati Ghibli won’t be coming here because it’s not possible to engineer the all-wheel-drive S Q4 for right-hand drive. That car attacks bends with rather more panache, generates some fine four-wheel drifts and issues suitably enthusiastic trumpetings from its exhausts. It’s still short of body control, but this is more forgivable in a car that will joyfully romp along a mountain pass. The S Q4 also cruises with surprising quiet, as do all Ghiblis, their aural refinement matching the visual sophistication of their cabins. Backbenchers may soon find a shortage of legroom less satisfying, but the seats themselves are suitably sumptuous. 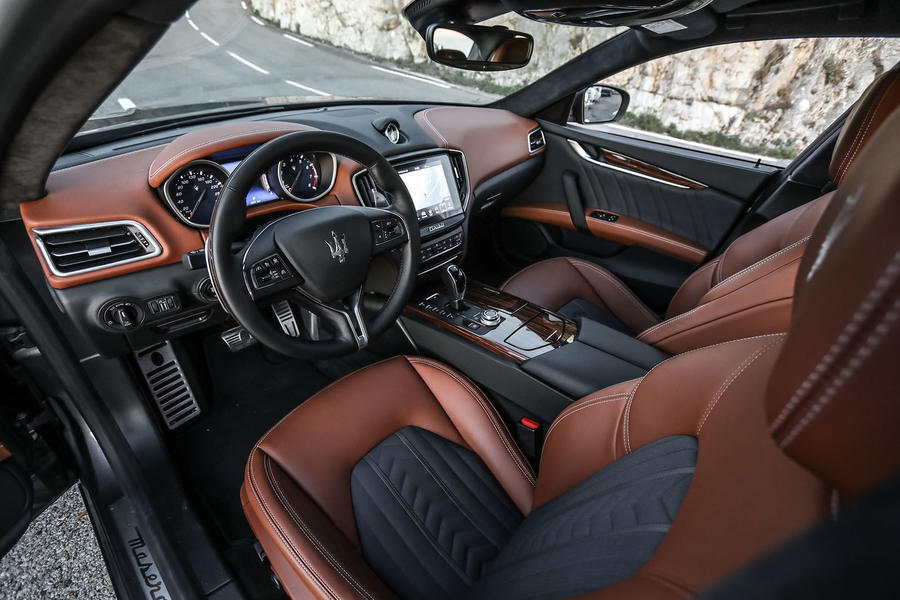 It would be easy to understand anyone falling for the Maserati Ghibli’s interior, and its quietly handsome style, too. While it doesn’t offer all the electronics hardware of a Mercedes Mercedes-Benz E-Class or a BMW 5 Series, the list of missing items is less serious than previously. The switch to electric power steering has largely been successful, too. But it’s a shame this update didn’t run to a rework of the suspension.

Body control, the occasional thumping shimmy from the rear end and, in the diesel’s case, a distinct lack of close-to-the limit composure leave this Maserati adrift of most rivals. For drivers mostly inhabiting motorways that will matter less than the allure of Italian leather, but keen drivers – and Maserati’s often stellar history – deserve something better. 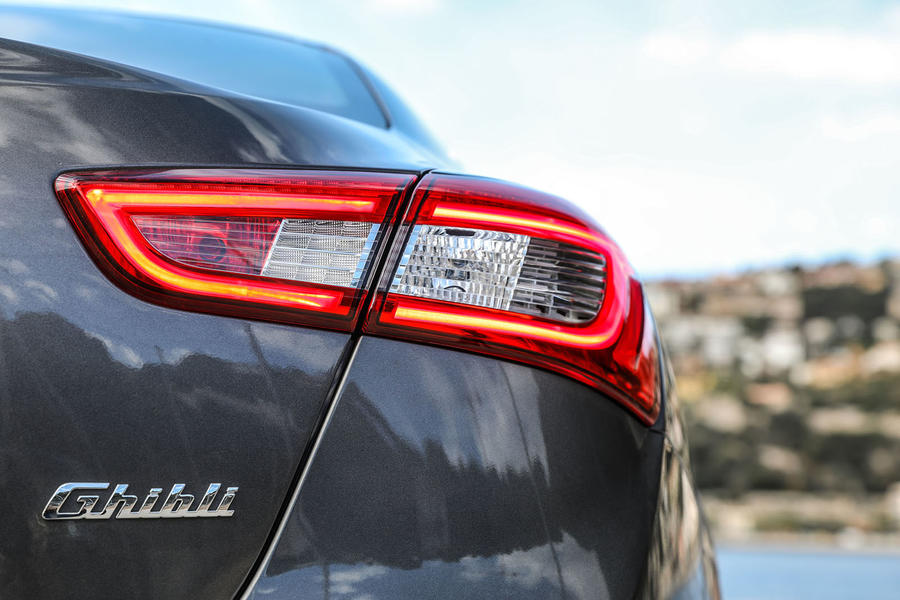 Stuningly beautiful car, so different in looks to your BM's and Mercs. So what if the performance is not up to the peers. It stands out and has great performance, you could say a poor man's Ferarri.

Stuningly beautiful car, so different in looks to your BM's and Mercs. So what if the performance is not up to the peers. It stands out and has great performance, you could say a poor man's Ferarri.

Too little too late!

While it looks much nicer than the larger, more expensive Quattroporte (which is also looking dated and almost Buick-like), it's still way behind its more mainstream competitors like Mercedes. Quality and reliability has always been an issue, but when does anyone buy an Italian car because of its reliability, but at this price range I expect less Chrysler parts used here and better more modern performance and dynamics.

The interior is beautiful to look at but the detailing and execution in some places are not up to par with its competitors. The grain of the wood trim (that looks like plastic) do not match or line up with each other (Even on a Mercedes C-class beautiful woodgrain trim is used on its centre console and dash and it's cut from one piece of veneer ensuring a continuously matching grain pattern), and the mesh pockets on the backside of the seats looks like something you would see in a trunk of any car.