From £52,8856
Share review
Some cars are brilliant. Some are charming. The Ghibli doesn’t have enough of either to win people over
Share
Open gallery
Close

The electrification age has dawned at Maserati but it’s still a pretty cloudy morning.

There will be an all-electric Granturismo replacement next year, but this for now is the Ghibli Hybrid, a large saloon whose electrical assistance comprises a 48V starter-generator and electric supercharger to boost the low-end torque and response of a 2.0-litre petrol engine.

At no point does it run on electricity alone, and nor can it be plugged in, but Maserati says that it nonetheless gives the Hybrid the urge of its larger V6 petrol-engined Ghibli while pulling the CO2 figure down to that of the diesel, which it has now discontinued. Headline figures, then, are 325bhp (the V6 has 345bhp) and 192-216g/km (the diesel was 206g/km).

The move has also, it’s said, improved the weight distribution, because a four-cylinder is lighter than a V6 at the front and a small battery pack sits under the rear. As with other Ghiblis, the Hybrid has a largely steel monocoque but with an aluminium bonnet and front sub-frame, and a magnesium dash cross-member, all to help lighten the front; which is, encouragingly, the kind of thing Maserati worries about. The double-wishbone (front) and multi-link (rear) suspension has coil springs while dampers, by option, and fitted to our test car, are adaptive.

For the 2021 model year, there are some mild interior mods, too. Nothing you’d be bold enough to call a facelift, but a new multimedia system running a more reliable, faster and higher-definition set-up, with increased connectivity. The 10.1in central touchscreen (there’s a rotary controller, too) is slightly curved, claimed to be a first in a car.

It looks good and is functional but just as useful is the diddy shelf beneath for steadying your hand on while you use it. Nice that there are plenty of physical buttons for things, too. And I don’t mind having a pair of clear analogue instruments. 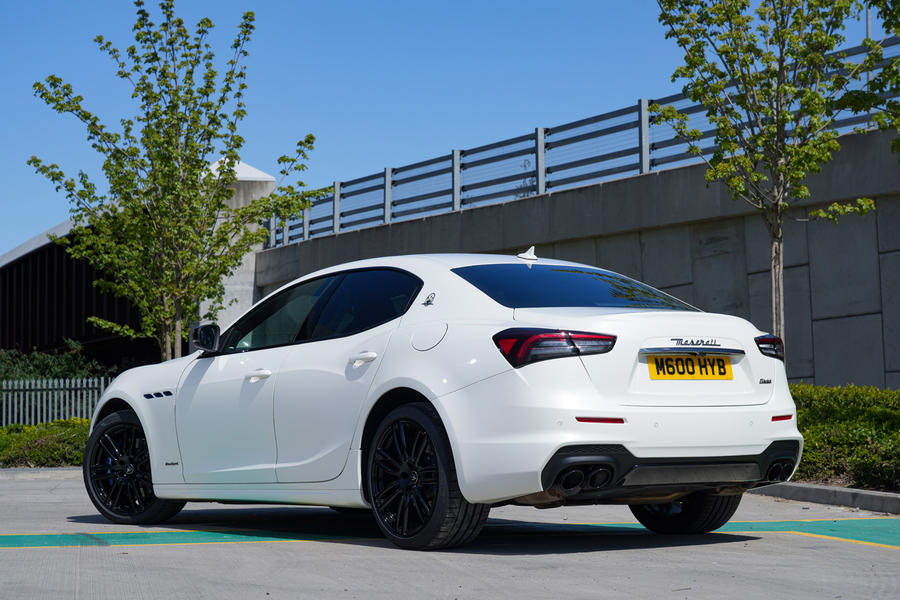 The rest of the cabin has been mildly tidied, which means it remains chunkily designed but pleasingly finished, with good materials nicely stitched. The seats put me a bit high and they’re a touch flat, while the steering wheel seems curiously large, too – plus there’s only one column stalk and it’s a long way behind the big gearshift paddles.

Generally, though, it’s a decent driving environment, with a scattering of storage cubbies on the dash, and very small door pockets. It’s better to be in the front than the back, where rear leg room is ungenerous for a 4.97m-long car.

The engine drives through an eight-speed automatic gearbox to the back wheels only. And the drivetrain is effective. The engine revs to 6500 and is quiet on little throttle, with a slightly raspy noise with a bit of whoosh and whine overlaid as you ask for more urge.

It’s nothing like as sonorous as a six-cylinder, or anything else that might scream Maserati, but it’s responsive, particularly so from low revs, where the ‘eBooster’ does its thing. Peak torque, 332lb ft of it, is at 4000rpm but it becomes urgent at far fewer revs. You can take control of the gears yourself but it doesn’t add much on the road, given the ample torque. Stick the drivetrain into Sport mode and you get a bit more noise as it holds on to lower gears for longer, but as soon as you’re at a cruising speed, you’ll probably pop it back in Normal again. At a cruise, it’ll hit 40mpg; in mixed driving, more like 30mpg.

The measures to balance the weight distribution sound quite promising – as though this will be an analogue driver’s saloon. And you wonder if it could be, had it been tuned better. The ingredients are there and, underneath it all, you can detect there’s the makings of a decent driver’s car.

As it is, it neither rides with the deftness of a true executive saloon nor has the agility or involvement of a sporty one. The Giulia of sibling company Alfa Romeo rather shows it how it’s done (in a smaller and less luxurious package, I grant you). Here, there’s a thump to the underlying ride, and steering that does little more than turn the wheels. There’s a nothingness to the steering, no build-up of weight, but conversely no oily smoothness, either.

I’m not sure quite what it wants to be and it ends up a slightly characterless driver’s car as a result. To its credit, the ride is quiet and body control is fine. There’s a firm damping mode but, by gum, you don’t need it. I’d almost say it’s pleasant enough – but at £58,500 to £70,270, just being pleasant isn’t enough. 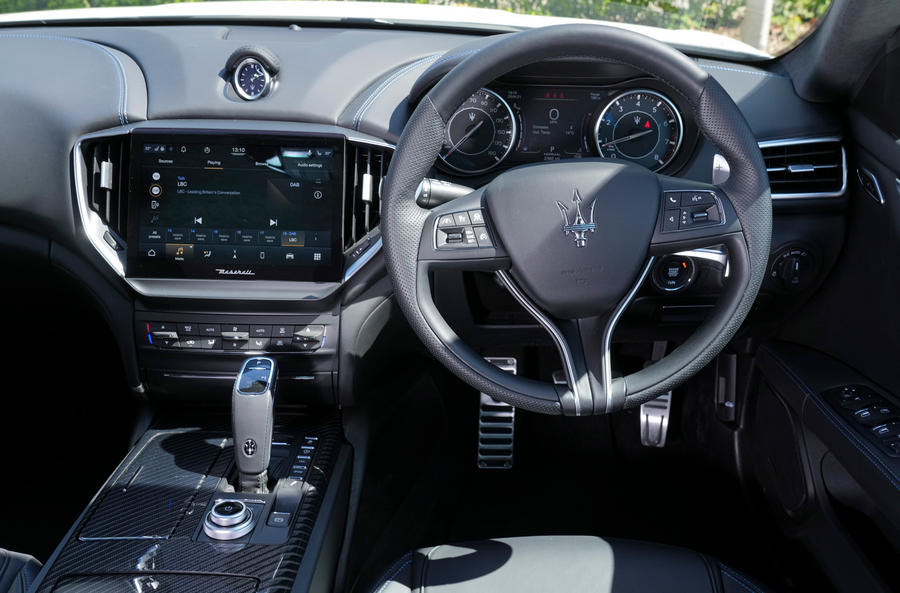 I know somebody who had a Ghibli, for a while, because he’d tried the opposition and wanted something new, and with the Ghibli he found a way to scratch an itch.

The real trick will be to make it a sufficient balm that people don’t get itchy again once they’re in it. 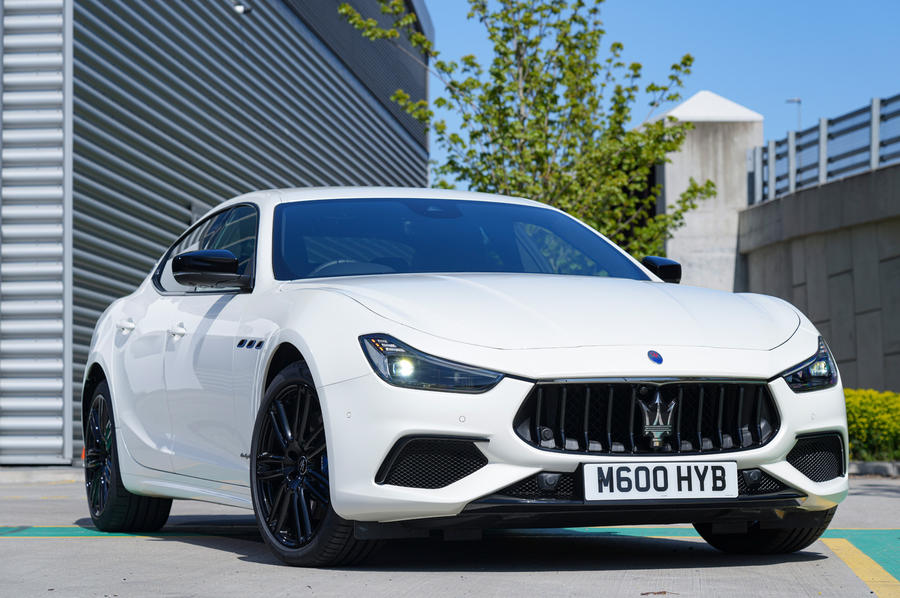 Log in or register to post comments
si73 4 May 2021
This is a similar weight to Toyota's fcev, which in turn makes the weight of the equally large Mirai seem not so bad.
Maserati has had some beautiful cars, this included, it would be a shame if they disappeared.
Andrew1 4 May 2021
I am sure the ejected successor will be the real deal. This is more intended to keep the brand in the news, for the time being.
MkVII Golf GTI 4 May 2021

Nothing about the Ghibli or any other current Maserati is enticing. This is why I said yesterday on the article about Alfa and Jaguar being in trouble that Autocar also seemingly forgot to mention Maserati's troubles. Maserati could have been a legitimate alternative to BMW, Mercedes or Audi, just an Italian version with more passion, verve and excitement, but FCA never gave them the resources or hired the right people to make it happen. FCA should can Maserati or Alfa Romeo so they only have one Italian luxury carmaker to turn around, one company to dedicate all the resources and money to, and one lineup of cars to make great. They don't need two brands stepping on each others' toes or purposely not expanding one brand's lineup to prevent it from competing with the other. I personally believe Alfa hasn't ever gotten the product expansion they were supposed to get (5-Series/X5 rival) because it would directly compete against the Ghibli. It's the same reason Maserati never got a Giulia sized car. There's too much similarities between the brands. I know with investment, Maserati could become a legitimate player in the luxury car space, but I'll say it again... Alfa Romeo needs to die off, or be sold to someone like VW, Daimler, BMW, etc. in order for Maserati to prosper.