From £52,9009
Valedictory Final Edition is the curtain call for Hethel’s intoxicating road-racer. After 21 years, just how much will the Exige be missed?
Open gallery
Close

We don’t always mourn the passing of truly unique cars.

When the Audi A2 slipped away, nobody really noticed (wrongly), and journalists weren’t exactly queuing up to pen an obituary for the drop-top Range Rover Evoque in 2018 (more understandable, that). But the Lotus Exige? This one hurts.

After 21 years and three iterations, production is ending, along with that of the ultra-lightweight Lotus Elise and the GT-flavoured Lotus Evora. Come winter 2021, the final Exige will have left the factory, which is now gearing up for production of the altogether more rounded, Porsche-911-rivalling Emira coupé. That has got a new assembly hall with autonomous pallets that move chassis between stations and an improved paintshop. Even the facility constructing the extruded-aluminium core is new and now sits near Hethel, having outgrown Lotus’s Worcester site.

But here’s the big one, for anyone who has been living underneath a rock in outer space: the Emira is expected to be the final combustion-engined Lotus ever. It will blend attributes from the Evora and the Exige and package it all underneath bodywork strongly reminiscent of the £2.04 million Evija electric supercar – yet it’s only a stepping stone.

Owner Geely wants to make Lotus an EV-only brand by 2028, as well as increasing production from around 1500 cars annually to a figure in the tens of thousands. Plans are in place to make many of these extra cars in Wuhan, China, and to branch out into crossovers in the process, although Lotus will also grow its very healthy engineering consultancy further, notably with the development of an electric sports car platform with Alpine. In short, change is afoot.

Given the Emira will be heavier and everything thereafter electrified, you could describe the fat-free Exige Sport 390 Final Edition tested here as the last of the Lotus old guard, Colin Chapman-style. Essentially, it’s the one-last-gasp replacement for the Sport 350, which has been the entry-level S3 Exige since 2015, when it replaced the Exige S.

In temperament, the 390 is split roughly 60:40 road to track, according to senior dynamics engineer Dan Peck, who says it has “all the best parts from the Sport 420 with the suppleness of the Sport 350”. Anyone craving more track-day attitude can escalate matters, as Lotus is also offering Final Edition versions of the Exige Sport 420 and the Cup 430.

Assuming you’re not the one paying (the 390 costs £64,000, while the 420 is £82,675 and the 430 is a plump £100,600), you can quickly tell the three apart by looking at the rear wing. The 390’s is the smallest but also the most stylised, artfully folding over on itself, whereas the 420’s is wickedly bowed with meaty endplates and the 430’s is bigger still, mounted higher and arrow-straight above the rear deck. Not that any of the three wants for presence. Even as the light of its life force begins to flicker, any Exige crams more visual impact in its Renault Clio-sized footprint than even the Lamborghini Aventador manages. Nearly. 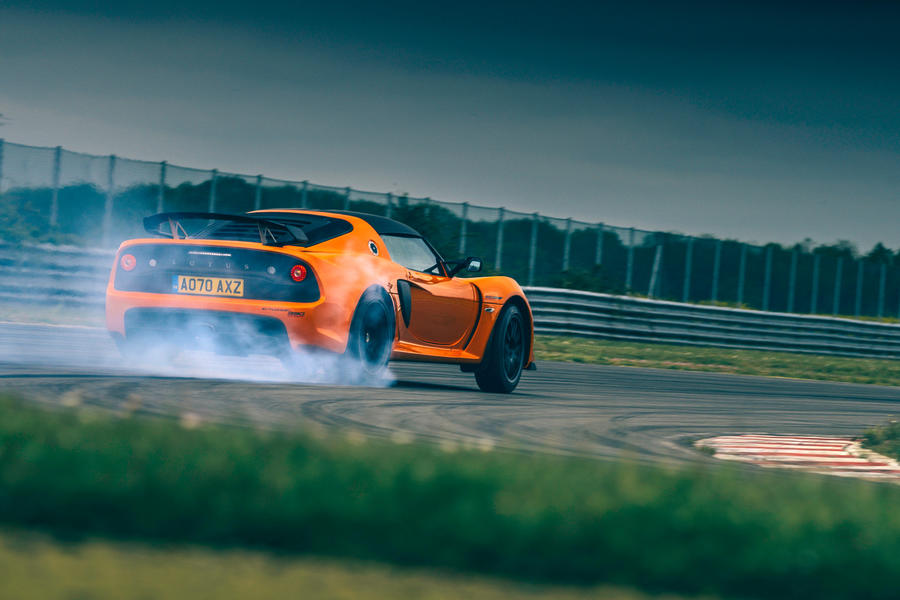 As for the hardware, the Sport 390 uses the familiar wet-sump Toyota 3.5-litre V6, mid-mounted transversely and as low as possible. To ratchet up the power from 345bhp in the Sport 350 to 392bhp here, the larger Edelbrock supercharger from the recently retired Sport 410 (keep up back there) has been fitted, along with that car’s three-inch exhaust system – up half an inch. The Sport 390 also benefits from a chargecooler so that it won’t suffer from heat soak and power shortfalls during track use, where grooved AP Racing brakes donated from the red-raw Cup 430 ought to prove their worth.

Where the Sport 390 really differs from its Final Edition siblings, and where it makes its single biggest nod towards road over track, is at Tarmac level. Michelin’s Pilot Sport 4S tyre is used, rather than the same firm’s sensationally effective but less versatile Cup 2 tyre, and we shouldn’t underestimate that distinction.

Finally, the aero package is lifted from the Sport 350, albeit with the front splitter from the Sport 410, for an overall 115kg of downforce at 170mph. For reference, the Cup 430 makes 171kg, although the similarly conceived Dallara Stradale towers over both with an astonishing 853kg. 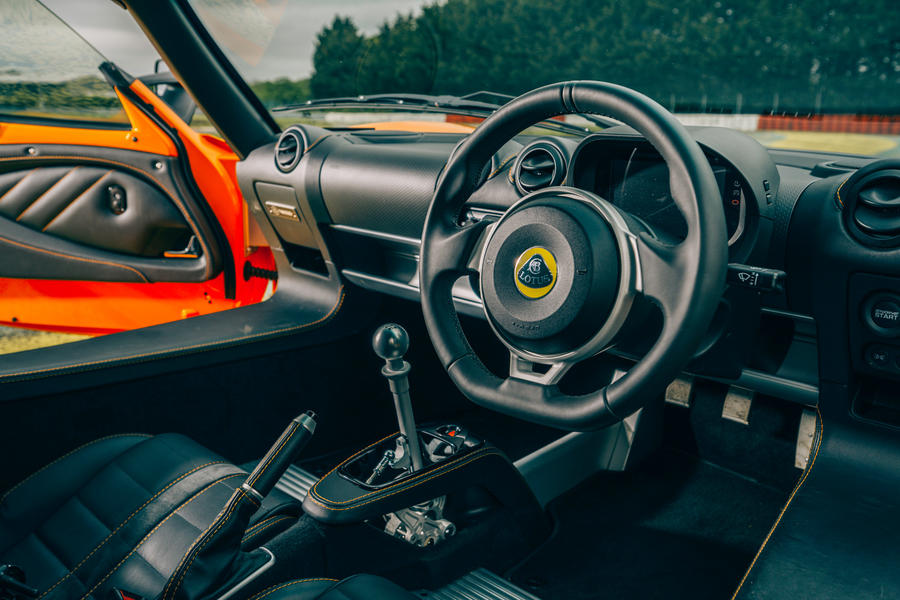 But as ever when you fire up an Exige and flow it through a corner or three, you forget all the details and simply become absorbed in one of the most thrilling driving experiences around. Even today, in the era of the consecrated Porsche 718 Cayman GT4 and Alpine A110, there’s nothing else that makes you so keenly aware of the physics involved, nor gives you the same pulsating feedback through unassisted steering and a beautifully stiff chassis.

It’s a chassis that shines in Sport 390 trim – poised and rewarding of precision but also more willing to rotate on its Pilot Sport 4S tyres and therefore playful in a way the more serious Exiges rarely manage.

The throttle-on transition between grip and slip remains just a touch unpredictable, and Lotus’s decision to fit the Emira with a Torsen-style differential (Hethel has traditionally shunned any form of limited-slip diff, as it can corrupt the steering) is a tacit admission that this is an area in which it needs to raise its game.

But in every other way, this chassis is a masterpiece. Fiercely throttle-adjustable and very much at home on the track, it’s also supremely effective on the road, where the Exige’s tiny body seems to glide along once you’ve got some speed underneath it – which you will, because the exhaust bypass valve slams open at 4500rpm. Beyond that point, you will raise the dead and thoroughly enjoy doing so. 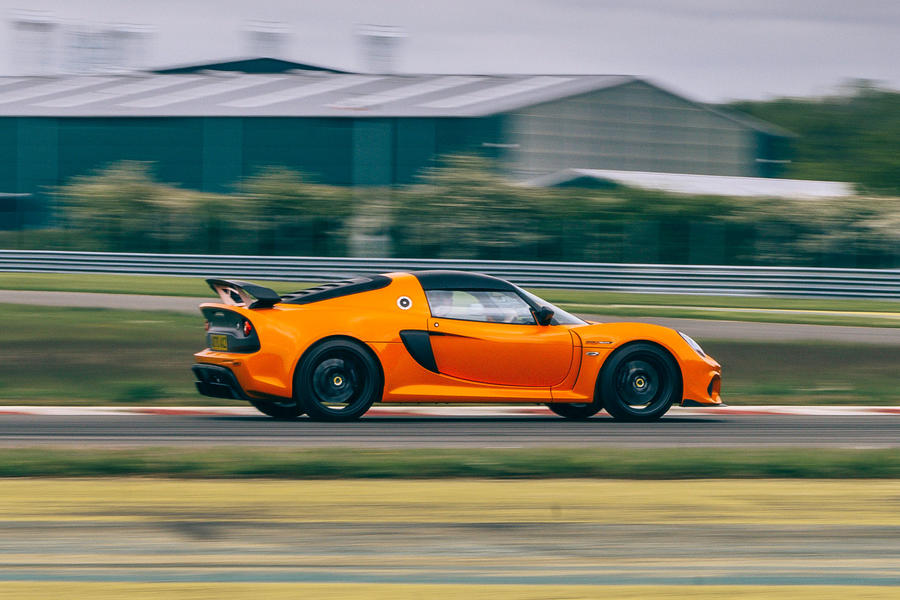 As for owning the Sport 390, I can see why you wouldn’t. There’s a reason why the Emira will have narrower sills, a higher hip-point (although still lower than the Evora’s) and more luggage space. But if you’ve any inclination at all towards these unique sports cars, try an Exige while you can.

Whatever the future holds, the chances of it yielding something that lets you play the Group C hero but is also, in the context of such machines, really quite usable isn’t just small; it’s probably non-existent. 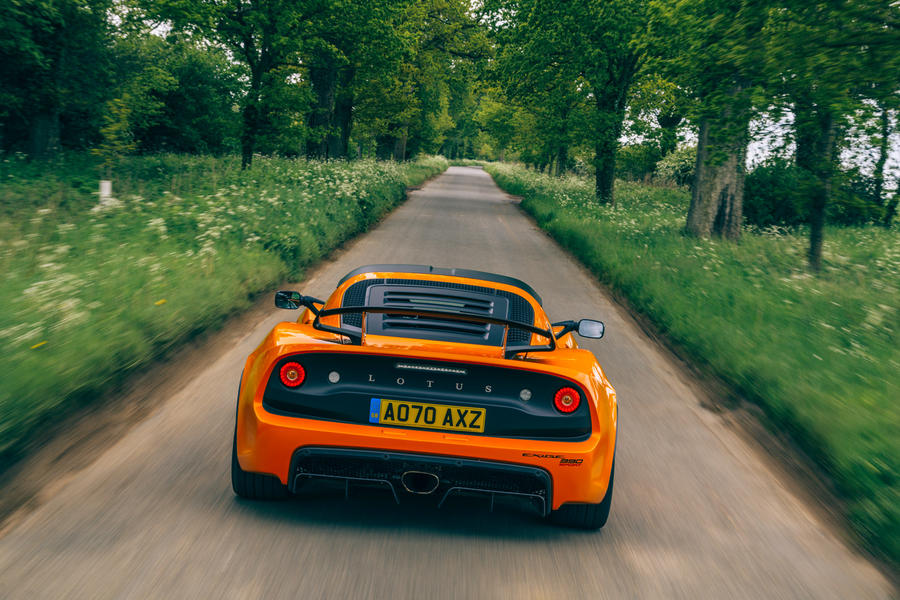 In which case save money and go for an Elise, which as I said would be my first choice, each to their own. The sheer joy of being able to take the roof off in this weather more than makes up for it being difficult for less able people to get into and out of anyway.

Like the way you compared the top of the range Exige to the Alpine by the way, total irrelevant comparasion as you are in an almost different category.

The Camry-powered (see what I did there?) Exige is utterly different from the Alpine - not only is it £18k more expensive for the base one, it's nearly double the price at the top end.

It's an irrelevant comparison though. The Exige is much more hardcore. As an A110 owner (and a Lotus fan - the ones I've driven have been brilliant) I have no doubt that the Exige would run rings around the A110 on a track, and it'd be darned hard to keep up with the Exige on twisty roads. But the Exige would be miserable in a traffic jam, it's awkward to get into and out of, and it's not nearly as nice inside. As an incompromised driving machine the Exige wins; as a car with a broader remit the A110 is more accommodating. Better to compare the latter with the Evora, or much better to celebrate all of these options for the glorious experiences they are, and no be so sniffy all the time.

End of an era, 64k is around the price of the top of the range meganne powered 1.8 Alpine, know which one my money would go on, actually an Elise would my first choice.