From £25,9607
This is the firm's first electric car, and it faces stiff competition from the outset
Open gallery
Close

Interestingly, despite this UX 300e being Lexus’s first pure electric car, the brochure for it still has a page dedicated to the manufacturer’s ‘self-charging’ hybrids. It seems that, despite Lexus finally joining the EV party, it can’t quite let go of what has been its main USP these past few years.

Still, better late than never. This is the fully electric UX (you can still buy a hybrid one), with prices starting from £43,900. Ours is the mid-level Premium Plus Pack, at £47,400. All versions get a 54.3kWh, floor-mounted battery and single, 201bhp motor powering the front wheels. The 0-62mph sprint takes 7.5sec and the top speed is limited to 100mph. Range? 196 miles. Our test car showed 162 miles in mild weather, or 182 miles once we killed the air-con.

Those figures aren’t amazing (the slightly pricier Polestar 2 manages 4.7sec and a theoretical 292 miles), but Lexus says it was a choice between cost and range. All of its hybrids are modular so it could have put more battery oomph in but chose this size as a compromise over a punchier price. 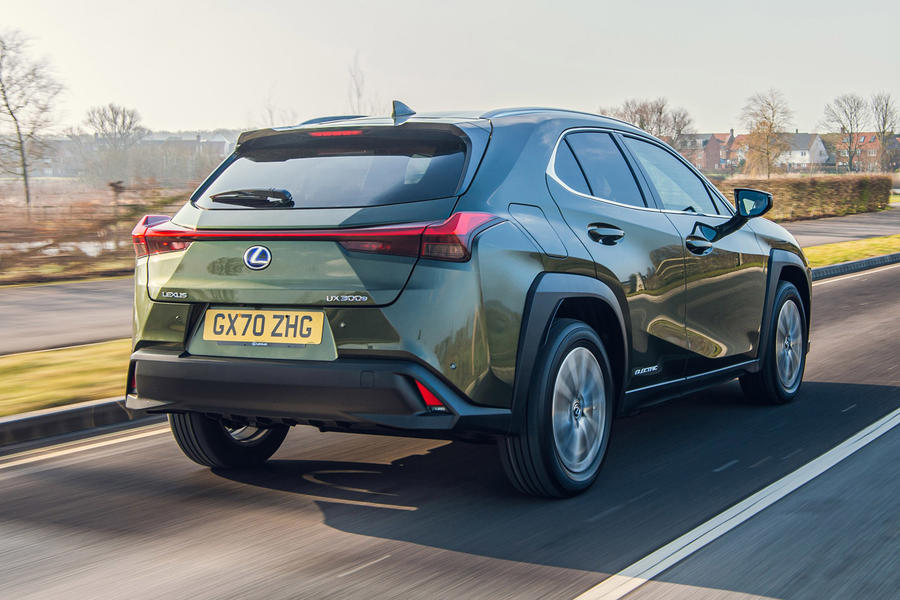 In practice, it’s difficult to see why Lexus didn’t do this before - if ever a powertrain fitted the Japanese firm’s zen-like attitude to driving, it’s electricity. The noise isolation is particularly impressive in this car, as there’s minimal road grumble and the suspension muffles any bumps trying to disturb the inner tranquillity. It’s a very calming car.

Not that it’s slow. The headline figure isn’t captivating, but it never feels sluggish on a journey and also keeps pulling well, even at motorway speeds. Being front-wheel drive, you have to tread carefully mashing the throttle out of a junction, as it’ll spin an inside wheel. Equally, there’s a bit of thump kickback if the steering is loaded up and you hit a mid-corner bump - blame those front tyres for having to do too many tasks.

It’s not an engaging car to drive - unlike the aforementioned Polestar 2 - because the steering is numb and you don’t get much sense of what’s going on underneath. But Lexus knows its market and aims for comfort. In that respect, it does a better job.

There is a brake mode, whereby you can increase the regenerative braking (and with three different settings via the paddles behind the steering wheel), but you can’t drive on a single pedal. The regen power isn’t that strong.

Inside, the electric UX still comes with the firm’s touchpad controller and a digital screen mounted high on the dash. At least the touchpad falls easily to hand just in front of the armrest, but it’s a real fiddle to work accurately and is too distracting to use on the move. To be fair, that same armrest contains buttons for the radio, media and volume so the most common operations can be controlled with physical switches.

The infotainment itself works okay without doing anything radically different - again, Polestar’s design and operation feel more up-to-date. The screen feels a bit poky, as the 7.0in offering in this Premium Plus model sits within the overall housing of the 10.3in multimedia system on the Takumi trim. If you opt for the top-spec model (admittedly a £5350 increase), you also get the excellent Mark Levinson sound system, head-up display, LED headlights, sunroof and sat-nav.

A special mention should go to the seats. These are wonderfully comfortable with just the right amount of support, and also come with ventilation and heat as standard in this trim. 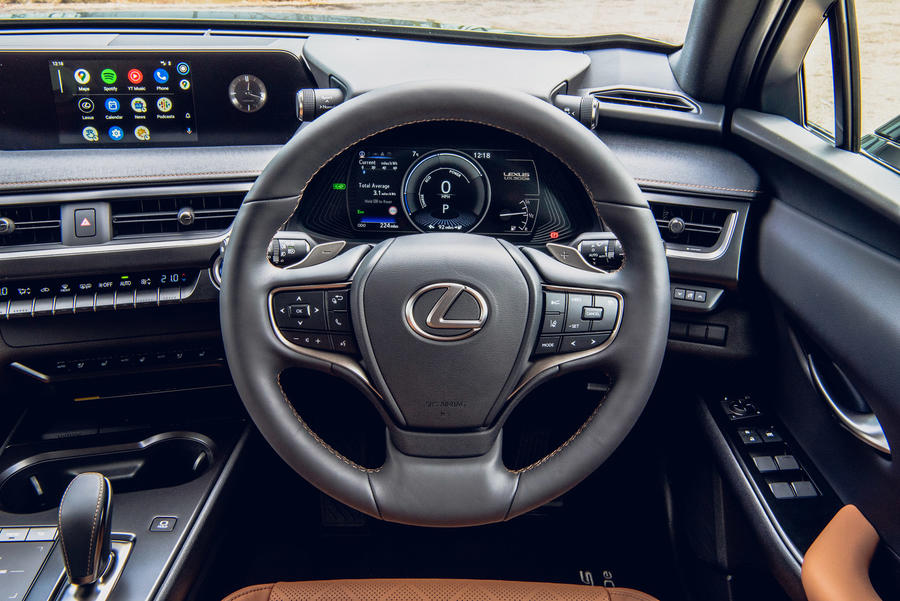 The UX 300e is an interesting option and has some lovely touches - the materials across the dash are great - but that isn’t enough to challenge the class best as others drive better. As such, like many a Lexus, it won’t sit at the top of the sales charts, but then the firm doesn't often chase those figures.

Nor, to be fair, in the current climate of EU fines for polluting manufacturer fleets, does Lexus need this to sell incredibly well in order to drag down its fleet average. Thanks to the brand’s years of hybridisation, it’s not close to breaching the CO2 limits that some manufacturers have had to be wary of. As such, it can build the UX 300e as its customers want it, not as the masses would like it. 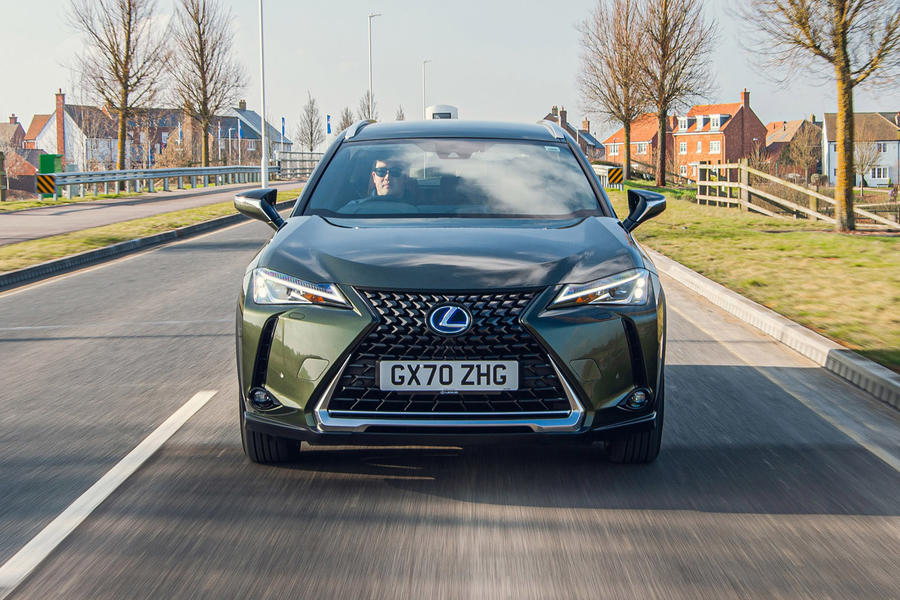 Log in or register to post comments
si73 18 March 2021
So it may not suit the enthusiast, but what SUV really does, that this is as refined as described, quiet and relaxing to drive, should make it a very compelling choice, plenty of space for a family car, good looking, premium badge, quality and feel, what's not to like. That it's not another boring German premium brand also appeals to me and it's price for its premium appeal, along with a pretty decent range all point to this being a pretty good choice, not a quirky left field one, in my opinion.
If I could afford a £40k EV, which lets face it, isn't bad as far as EVs go, this would definitely be a consideration for me.
Antony Riley 17 March 2021

Typical Lexus priorities fantastic seats, super quiet, build quality that supasses the Germans and sevice to die  for Thats why Lexus sits at the top year after year for customer service reliabilty and top notch build. They dont need to chase the oppostion who like to turn out cars faster than Heinz make baked beans,

I quite agree, however the reviewer seems to have pre-determined that a Polestar2 is a better car!

Yes Bar room lawyer. I read Autocar and Autoexpress and find their bias to The VW group astonding too. Look at all current reliabilty stats plus their service dept,s and again way down the charts.  So why do they always prause these to us the buying public ARR yes advertising revenues. thats what. Mind on this occastion reccomending the Volvo is a first hey !! Plus they I mean the weelky magazines just dont get the Lexus way of car making and on going customer service. Being a Lexus owner for almost 20 years I do, and why I look at friends who dont and see their wows when buying non Lexus especially German made over hyped brands.

Anthony, I have driven a Lexus, an IS300H, for 3 1/2 years. No it doesn't handle Autocar would like, but then I didn't buy it for that. I wanted a larger car that wasn't a diesel. Their continuous crticism of the Lexus infotainmnt system is to me pre-judgedand wrong, after about half an hour it became intuitive and I have no problem using it.

The other daily drive is a 2016 Mazda 3 2.0 litre petrol auto, bought to replace a 2011 VW Tiguan 4wd diesel auto we intended to run until it expired. VW Dieselgate modifications made it undriveable, at one point dropping to 4 mpg (not a typo) and the DPF regenerating itself 5 times in 7 miles.