From £25,9607
Basic UX loses some of the F-Sport’s dynamism, but still makes for a largely refined, comfortable urban runabout
Open gallery
Close

Some six months after we got our first taste of the Lexus UX in pre-production form in Sweden, the baby brother to the NX and RX SUVs has finally landed in the UK.

It’s an interesting looking motor, isn’t it? I dare say some will find its myriad creases, folds and angles rather polarising; but to these eyes the compact SUV cuts a fine form indeed.

Our experience of the model Lexus hopes will help push it through the 100,000 annual European sales mark by 2020 has so far been limited to the F-Sport variant, but this time around we’re driving it in standard, £29,900 guise. Well, standard guise but with the optional £4,300 Premium Pack Plus equipped, bringing its total asking price up to £34,100. That’s quite a sum, but the equipment it introduces to the UX’s alternatively attractive cabin does help soothe the sting.

The list of new features includes sumptuously-upholstered leather seats; seat heaters; a heated steering wheel; and curious, but visually striking “Japanese paper-inspired” upholstery for the dashtop. The result is a very positive one indeed; of the current crop of upmarket compact SUVs I’d say the UX sits towards the top of the list in terms of visual and material appeal. Premium Plus doesn’t only add to the UX’s cabin, either: 18in alloys; privacy glass; and front and rear parking sensors are also thrown into the mix. 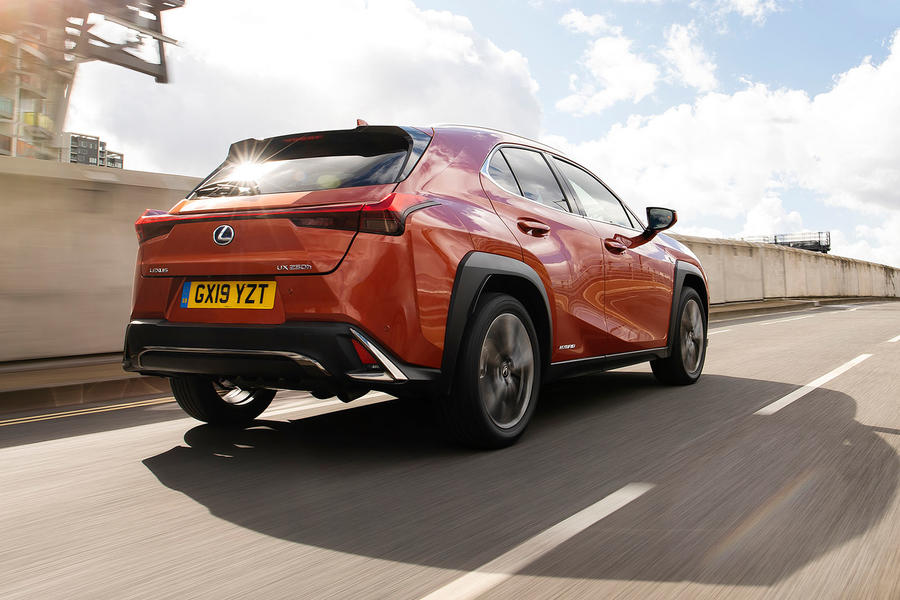 The crucial point of difference between this particular UX and the F-Sport we drove on the international launch all those months ago is that it forgoes that model’s adaptive dampers and sportier suspension.

The result is a distinctly soft-edged primary ride that, while perfectly agreeable around town, does feel almost constantly unsettled on Britain’s more questionably surfaced A- and B-roads. Head-toss is fairly conspicuous as a result, while undulating surfaces aren’t smoothed out with quite the level of sophistication you’d hope for from a vehicle geared more towards comfort and refinement. Instead, its doughier suspension calibration means it just sort of wallows its way over lumpier stretches of Tarmac.

Without the ability to firm up the UX’s dampers during bouts of more animated driving, body roll through bends is also noticeably pronounced - particularly during quicker directional changes. Its front tyres don’t require much in the way of provocation to lose purchase and nudge into gentle, but considerable, understeer, either. Combine all this with a steering rack that’s muted, but admittedly linear and progressive, and the UX doesn’t feel particularly athletic. Certainly not as athletic as its dashing exterior suggests it might be, in any case. It’s similar to that one kid at school who wasn’t particularly talented on the playing field, but always had the flashiest sports gear anyway.

But you know what? I don’t think its lack of handling panache is that big a deal; the UX isn’t the sort of car you’d buy for the purpose of pointing down twisting country roads anyway. Lexus knows this, too; it claims it’s targeting buyers who fit into the ‘creative urban explorer’ demographic. While I’ve no idea what constitutes a creative urban explorer, the UX makes town driving a comfortable, refined experience.

Here, that softer suspension makes for a low-speed primary ride that’s far more settled and cosseting. The manner in which the CVT and hybrid powertrain work to guarantee a smooth step-off and reasonable low-down punch will appeal to many, too. Of course, if you plant your foot the CVT will see the engine flare its revs considerably, but the accompanying drone is muted well enough. Gentle inputs are what make this car tick; adapt your driving style to suit, and the UX is difficult to dislike.

It’s difficult to take issue with the fuel economy, too. With the ability to rely on electric power at low-speeds for short periods of time, the WLTP economy range of 49.6 to 53.3mpg seems perfectly achievable. 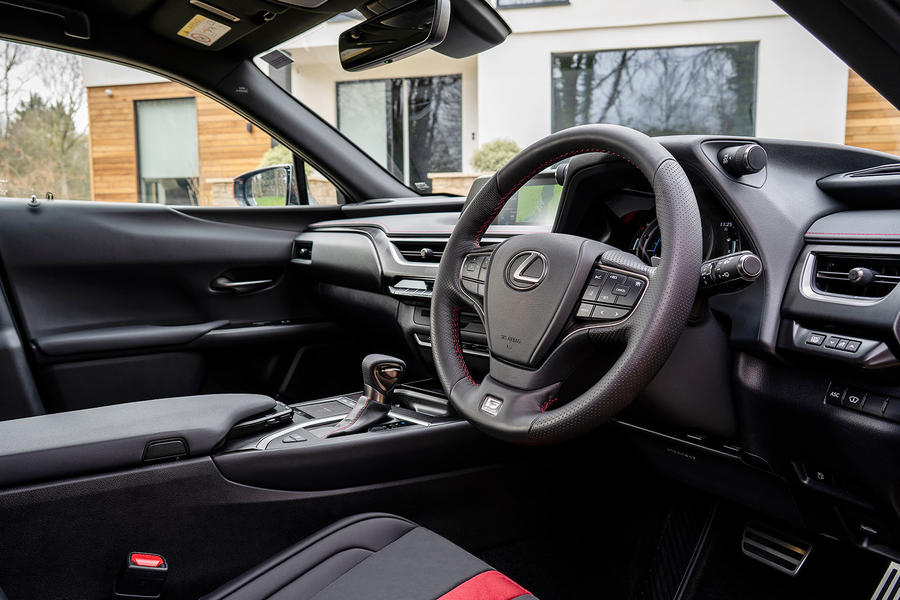 Even without the trick adaptive dampers and sportier suspension set up that differentiates the F-Sport from its regular rangemates, there’s still enough about this entry-level UX to warrant consideration. Its laid back, smooth demeanor helps mitigate the stress that can often accompany driving in built-up areas. That you won’t need to constantly raid your wallet in order to keep it fuelled is a further draw, while fleet managers will no doubt find its 23% BIK rating appealing.

Admittedly a Volvo XC40 is a more complete, well-rounded package, while the Audi Q3’s cabin offers even greater levels of premium appeal. But for those after something a little different, that’ll stand out from the rest of the compact SUV field, the Lexus UX is easy enough to recommend. That said, I’d still go for the F-Sport. 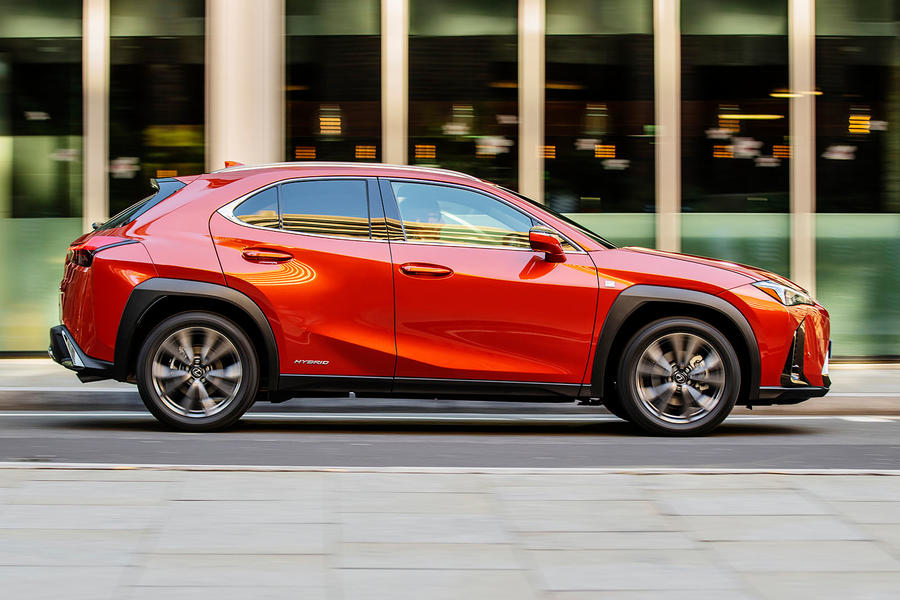 This is really nice but it

This is really nice but it lacks the charm of the MG Montego Turbo.

All these troll coments about

All these troll coments about Lexus makes me laugh.

Its the most relaible and sought after especially in the USA

Mind you, the way us brits critisize them you would think we led the world in automotive perfection.

Wait, sorry what was I thinking- We dont have a car industry anymore. we just assemble other peoples cars

...well they can keep the ugly munters in the States, along with all their own 'home grown' ugly munters. Should fit in well.

lets not forget Its just a Toyota in a Tu-Tu, so of course it is reliable...doesnt unfortunately make it desirable though.

if you insist on calling a car, a motor,should'nt you change the name of the magazine to automotor?