From £41,9407
Supersize version of Lexus’s hybrid-only SUV is a quiet and pleasant but at times curious car to drive
Open gallery
Close

This is the extended-length, seven-seat version of Lexus’s biggest European-market SUV, the RX. While the regular RX was launched in 2015, the L version came along in 2018; both versions had a refresh for the 2020 model year, when we tested the car in regular-sized form and sportier F Sport trim. This is our first chance to get a taste of the more practical, comfortable and versatile side of the RX ownership experience.

The L version of the car is 110mm longer than the regular RX, and all of the extra length is concentrated within the rear overhang. Above that, the car also has a steeper rear window to make extra room for heads and bags at the rear. It ought to look much more like a three-bedroom semi with a dodgy kitchen extension really, but Lexus’s wedgy, edgy styling for the car, which was updated 18 months ago, disguises its bulk quite cleverly. Very few seven-seat SUVs look good, but at least this one still looks a bit different.

The car comes in ‘self-charging’ petrol hybrid form only, just as before; four-wheel drive is provided by a directly driven electric rear axle. It received some incremental chassis stiffening measures (delivered by better joining and welding techniques) as part of its last facelift, as well as revised dampers and a stiffer rear anti-roll bar.

Equipment-wise, the RX now has a 12.3in infotainment system with touchscreen input and Apple and Android smartphone-mirroring compatibility. If you opt for a higher-trim Takumi version (or you buy the right option pack), you can have a wireless device charging pad and a head-up display too. You can also now have individual ‘captain’s seats’ in the second row (instead of the usual three-seater bench), which offer extra adjustment range, and also make a bit of extra leg and foot space for those in row three.

The car’s value proposition was given a shot in the arm when Lexus introduced a new entry-level version of the RX for a cheaper price late in 2020. That move meant you could, and still can, get into one of these for less than £55,000, complete with seven seats as standard, 20in wheels, that updated infotainment system and a long list of active safety systems. And that’s in a luxury SUV market in which you’ll do well to get into a similarly equipped Volvo XC90 mild-hybrid petrol, or a comparable diesel-powered seven-seat BMW X5 or Land Rover Discovery, for less than £60,000. 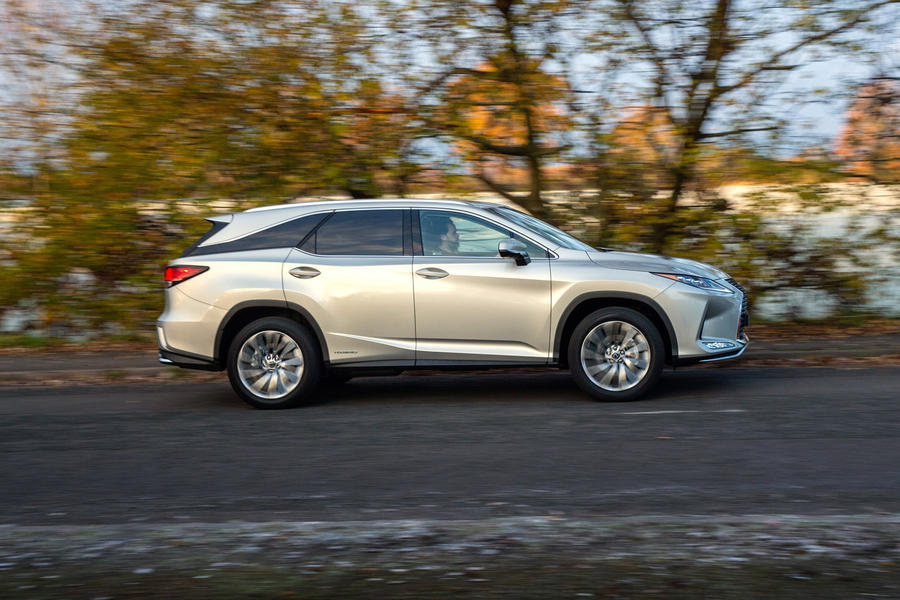 Lexus's cabin is one of rich, solid-feeling materials and high perceived quality - but it’s also quite old-school. The RX’s fascia is still big on buttons and switches (there isn’t one that feels remotely flimsy or low-rent, by the way), and it still has analogue illuminated dials and a chunky clock right in the middle of the dashboard, and very nice they look too. There’s even a golf-ball-sized knob for tuning the radio, and a slot in the centre stack into which you can put something called a compact disc (assuming you’ve still got any). This is very much how good luxury car interiors used to be, before how they look became of more importance to car designers than how easy they are to use while driving.

There’s still a conveniently placed fingertip trackpad input device on the transmission tunnel that you can use to operate the infotainment system, too, if you don’t like doing that at arms length on the screen itself. Having said that, the new infotainment system is quite a lot more usable than the old one simply because you can lean forward and navigate it with a prod of a digit on occasion. It could still be a bit more intuitive to use, but it’s missing little in terms of information or features.

You sit medium-high and bent-legged up front in the car, with a commanding view of the road but also with a little less head room than some big SUVs have. Second-row space is good, the car’s middle row being split 40:60, and sliding forward and aft as well as folding.

Third-row passengers get pretty meagre space, although they are provided with air vents, cupholders and a climate control console of their own. There’s enough room for little ones, but even a young teenager wouldn’t want to travel back there for very long, and access is tight. Lexus’s second-row captain’s seats may address the leg room shortage a little, but I doubt very much that they’d make a meaningful difference - so if you need a seven-seater with room for adults in all three rows, best shop elsewhere. 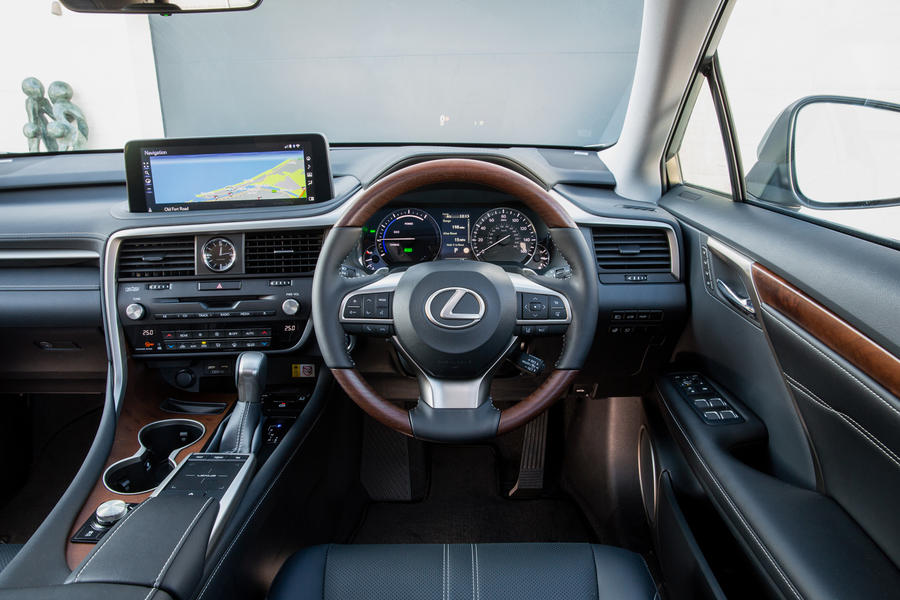 The RX’s hybrid powertrain works well around town and through the top half of the accelerator pedal’s travel. It’s hushed and pleasant under light loads, and if you do mostly urban mileage and aren’t one for rushing around, you might see a daily return of 35mpg from the car, which isn’t bad for something of this size.

Drive harder and it responds strongly enough, and without much in the way of old-school hybrid 'rubber-band effect' delayed acceleration. Toyota and Lexus hybrids never quite used to feel like they developed every last horsepower they were supposed to but, on a wide open throttle, this one does. But it still needs to let the engine rev hard to really pick up urgently; and a 3.5-litre V6 spinning to 5500rpm about three feet away from your ear is never going to make for an effortless or entirely refined-feeling car.

In the bottom half of the accelerator travel, the RX’s engine feels as much like an outboard motor as a car engine: it’s effective but a bit characterless and seems strangely detached. It also makes the RX seem very much like a front-wheel-drive car when it’s knuckling down; you can feel some tractive load and corruption of the steering, particularly on uneven surfaces or when cornering.

Broadly speaking, though, the RX handles quite well despite its size and heft. It steers with plenty of weight and nicely judged pace, the rack lightening just enough at maneuvering speeds but feeling assured and natural through quicker bends. It is nothing to get excited about when you’re at the wheel, but it takes a line quite willingly, and hauling it around tighter corners and holding it in close to a verge when you need to is easily done.

Body control is reasonable when cornering, but the car’s suspension feels quite soft most of the time. Soft, that is, but not always as supportive as it could be, and not always entirely comfortable.

The RX’s ride is one that’s generally pretty well isolated except on the coarsest Tarmac, but it's almost always on the move at speed. Just a little bit, perhaps, at A- and B-road speeds when the surface is good; but quite a bit more so if the surface gets choppier, when the car will begin to pitch and squat, and joggle you gently in your seat.

If I’m absolutely honest, it brought to my mind Her Majesty’s bath water on the Royal Yacht Britannia. It may wash around gently when the going’s good, soaking up little inputs and disturbances rather nicely, and seeming generally agreeable. But it quickly gets sloshy when conditions turn rough, or when the helmsman gets a bit carried away on the bridge – as can happen, of course. ("Sorry, ma’am. Sport mode is disengaged.") 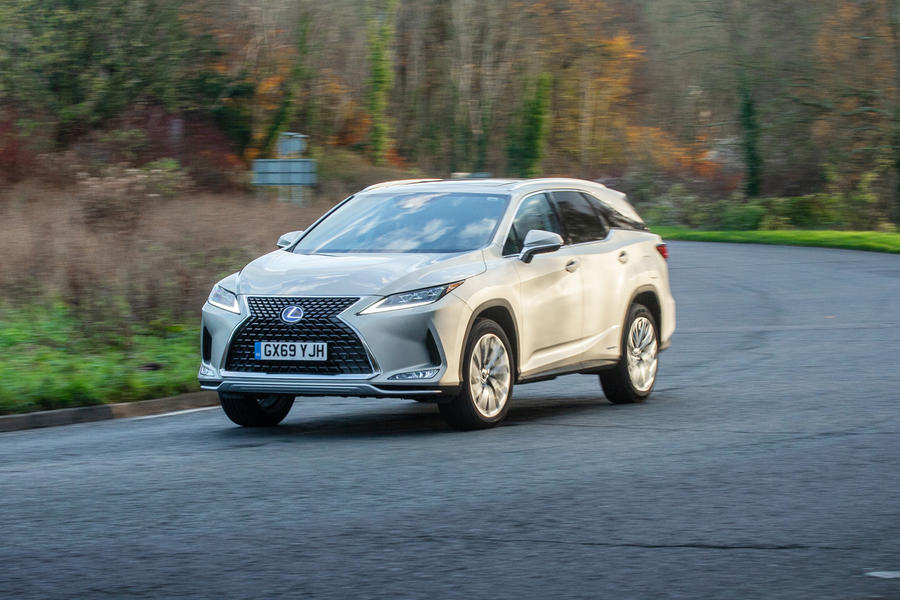 The RX would be a fairly smart, refined and decently economical way for a private buyer to avoid a diesel engine in a big SUV, without landing that buyer in a particularly thirsty petrol, or a plug-in hybrid option that he or she may not be able to charge up (and which could therefore become just as uneconomical).

A torquey, smooth, fairly frugal multi-cylinder diesel engine and a conventional automatic gearbox would still be my default choice for a car like this; and it is likely to remain so for as long as you can buy one. Nevertheless, the RX’s hybrid powertrain is a pretty credible alternative.

It remains a little bit funny to drive in some ways, isn’t as roomy as the very largest seven-seat SUVs, and isn’t always as comfortable as it might be. But it’s classy and well built, it feels like it should age well, and it offers plenty for the money. 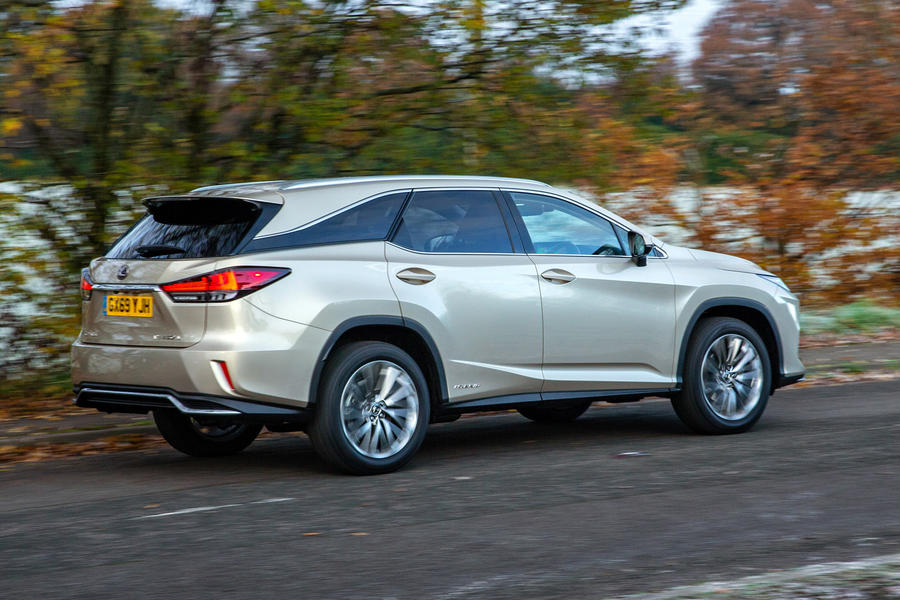 A typical Lexus smooth,sophisticated peerless build quality and the reliability of a Swiss watch and for what it is excellent value. If I had a criticism it's slightly too Anerican for my tastes,but what's the alternative? for the same amount of money you could buy a similar SUV that wouldn't hold a candle to the innate quality of a Lexus

Interesting and no doubt extremely reliable for its second and subsequent owners, but I would want something better to drive and more modern feeling than this for my £58k.

This car has achived something very few cars do, it is a complete munter from EVERY angle. Toyota at its worst