The new Range Rover Sport HST: a special new trim level for Land Rover’s ever-popular Porsche Cayenne rival which gives us our first taste of a key component of the company’s developing engine portfolio – the first six-cylinder motor of the ‘Ingenium’ engine family.

JLR is moving away from V6 engines and towards straight sixes for a few reasons: because it can develop the latter using modular block architecture related to that of its four-pots, but also because straight sixes are more easily packaged with the ever more complicated induction and exhaust systems that modern engines use, and they also deliver well-known relative advantages in mechanical refinement.

The Range Sport’s new ‘P400’ unit is just under 3.0 litres by volume, and it uses twin-scroll turbocharging, electric supercharging and mild hybrid electric motor assistance to make 396bhp and 406lb ft of torque. It effectively replaces the car’s old 3.0-litre V6 supercharged option, slotting into the lineup just below the P400e plug-in hybrid on price, but slightly above it on acceleration and top speed. And, while you can have it in a more ordinary trim level, Land Rover is marking the engine’s introduction with a special trim derivative called HST. 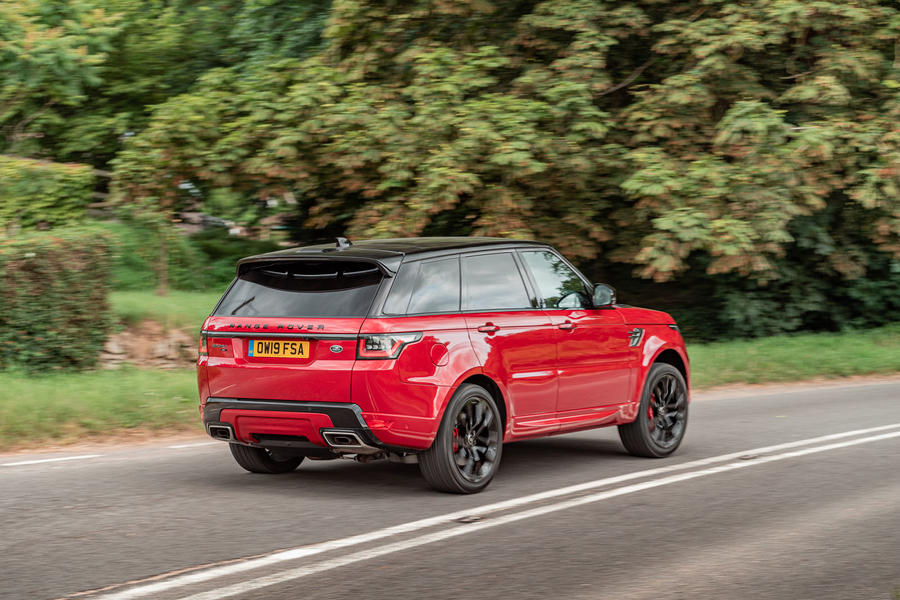 Your first impression of the new motor is one of refinement. Gaydon has gone to considerable lengths to make the P400 the smoothest and most discreet engine available in the car at any price – by fitting near-silent timing chains and the like – and the effort’s paid off pretty clearly.

The HST starts and runs very quietly indeed around town, and shifts gear almost imperceptibly on a steady throttle. There’s a slightly slurred shift quality about the way it swaps cogs at times, and also an occasional gentle surge of torque on upshifts that comes unannounced – but almost nothing else to mark each gear as it engages.

Extend the engine’s revs in manual mode and, even in a 2.2-tonne car, the straight six is responsive, flexible and potent; in something half-a-tonne lighter, it’d be ready for a sporting application already – assuming a more positive and consistent shift quality could be tuned in. Power delivery is very linear; the engine pulls beyond 6000rpm notably more freely than JLR's four-pot Ingenium turbos. Audible character, meanwhile, is great: smooth and reserved at low speed, yet quite tuneful through the higher reaches.

Our short test drive didn’t grant a chance to get a really accurate impression of what the HST’s everyday fuel economy might be, but did suggest that 25mpg is achievable on a mix of urban and country roads. Explore the engine’s full range of performance and you’ll see fuel economy drop quickly into the high teens. Anyone expecting economy on a level with that of a SDV6, then, might therefore be in for a slight disappointment – although, if you drive moderately, it certainly seems possible to get a respectable return.

The HST’s ride and handling is for the most part as we’ve reported of other ‘L494’-generation Range Sports – and both still bear comparison pretty well with the very latest arrivals in the luxury 4x4 set. For such a high and heavy car, it remains a very pleasant surprise to find how agile and precise the car feels at cross–country speeds, and just how cleverly its body control juggles a tied-down sense of control with fluent long-wave bump absorption. As a result, the Range Sport still seems like the sort of car that a keen driver should gravitate towards, in a field of very accomplished but often quite remote-feeling luxury SUVs; today, just as it did in 2013.

The one footnote to mention is that our test car’s low speed ride did suffer a bit for the fitment of optional 22in alloy wheels. Although supple at higher speeds, the HST picks up on sharper ridges and raised ironwork in slightly fussy, unbecoming fashion. Thankfully, smaller rims are available.

Land Rover’s 2017 facelift for the car widely updated the Range Sport’s interior, and as a result it doesn’t look or feel quite as old as you might imagine. Gaydon’s Touch Pro Duo infotainment system has plenty of graphical slickness and is easy to use with familiarity, and the mix of materials around the rest of the cabin is generally appealing to the eye and to the touch. 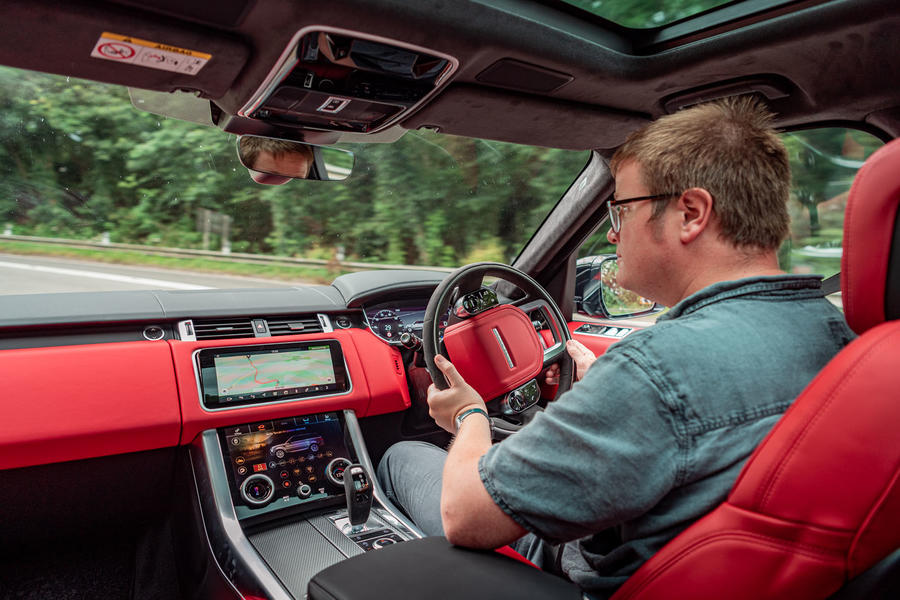 Honestly, I’d avoid the more garish touches (that’s ‘pimento’ two-tone leather, for the record, and it’s an option; the carbon exterior trim isn’t) and the bigger alloy wheels of HST trim. Given how refined this car is in other respects, its shortfall on low-speed ride jars just a little bit – but it can probably be either mitigated or avoided almost entirely with a better wheel choice.

Otherwise, the new P400 engine seems to suit the Range Rover Sport very well, proffering much of the accessible torque and easy drivability of the multi-cylinder diesel versions, as well as a refinement and richness to compare with a V8 petrol. Most buyers should probably stick with an SDV6, but you can well imagine this becoming one of the go-to Range Rover engines for the firm’s metropolitan clientele. It should also serve very effectively, I dare say, in more driver-focussed Land Rovers and Jaguars in the not-too-distant future. 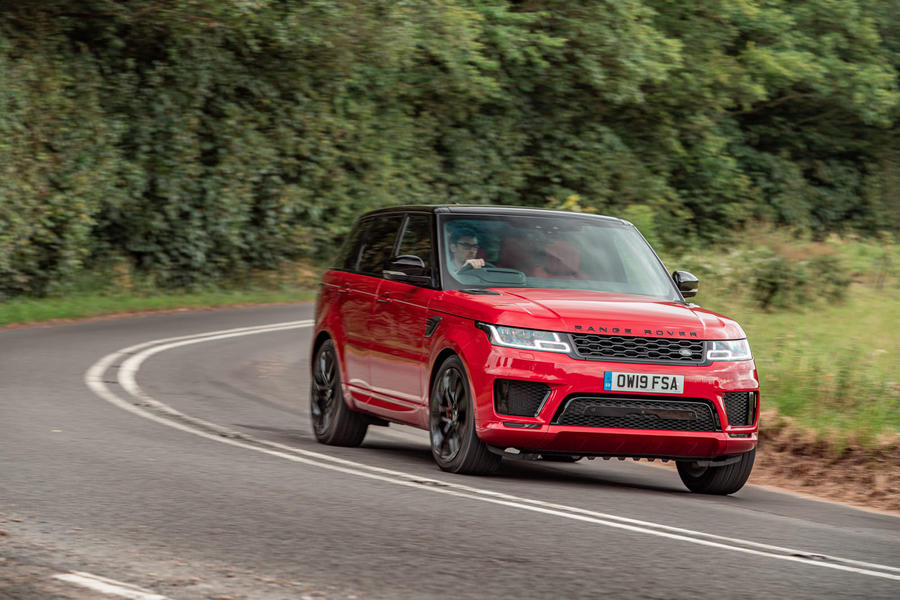 A red Range Rover Sport with a red interior?

Engline sounds good though.  Get it popped in some of the smaller cars.  Come on-concerted effort everyone...

Why would you bother with anything else as long as you can afford one, my cousin and I have them and been superb, I get 28 to 32  mpgin my last of old model and my cousin gets 35 to 39 mpg with a one year old new model.

So even with electric s/charging

And mild hybrid tech, you'll be very lucky to see only mid to low twenties mpg.
Diesel all the way with this behemoth.
DeathToMing 11 July 2019

And mild hybrid tech, you'll be very lucky to see only mid to low twenties mpg.
Diesel all the way with this behemoth.

I have a 3 litre 2012 Range Rover Sport and get about 28-32mpg. That's with a mixture of motorway and urban driving. Best car I've ever driven.