From £46,8009
Facelifted Disco 5 offers almost all the Defender’s off-road ability yet is sweeter on the road
Open gallery
Close

Land Rover invented the Discovery in 1989 to fight new rivals such as the Mitsubishi Shogun, and it has since proved not just capable but also almost cultishly likeable.

No wonder the concept hasn’t changed in five generations, except to mature and improve. And today's Disco duly follows the same rough recipe as the original: it's the love-child of rugged Defender and lavish Range Rover, which is to say formidable off-road but equally happy on the motorway. Plush but not posh. And for a price that, were people more rational, would have it outselling the Range Rover Sport and Velar.

And yet, the Discovery's long-standing niche in the Land Rover line-up has recently been skewed by the arrival of the rejuvenated Defender. By swapping the body-on-frame setup for the D7 aluminium monocoque used by the Discovery and Range Rover (albeit heavily beefed up), the Defender’s on-road manners have been transformed, while its interior feels like the Palace of Versailles compared with before. It's now an effortlessly useble machine, as well as one that's more capable than almost any other.

Where does this leave our friend the Discovery, then? In quite an uncomfortable position, truth be told, which is why the updates for 2021 have been aimed at gently re-establishing the model in the Land Rover line-up, as well as keeping it competitive with the Volvo XC90, Audi Q7 and Mercedes-Benz GLE.

The makeover starts with new air springs, new anti-roll bars and recalibrated dampers and steering to imbue the Discovery 5, which has been with us since 2017, with more precision on the road while sacrificing not an iota of that capability off it. The current Discovery has never been something you could describe as 'agricultural', but the chassis tweaks are aimed to make its road manners better than ever.

And, if anything, its ability to negotiate improbably tough terrain has also been improved, as you can now manually configure the ride height and locking characteristics of the rear and centre differentials irrespective of the mode selected for the Terrain Response 2 programme. That you can also now see in real-time when and to what extent those differentials are locking, via the superb new 11.4in Pivi Pro touchscreen infotainment, brings an extra bit of fun and involvement.

Wading depth also remains class-leading, although the Discovery’s commendable breakover, approach and departure angles are easily outdone by those of its sibling. And while we're at it, the braked-trailer towing capacity is still 3500kg across the range, which is as much as you can lug around on a regular Category B driving licence.

The interior then benefits from that hugely improved new Pivi Pro infotainment system, whose curved touchscreen lifts the ambience, but the decision to swap the lovely Range Rover-inspired steering wheel for one clearly Defender-related is curious. 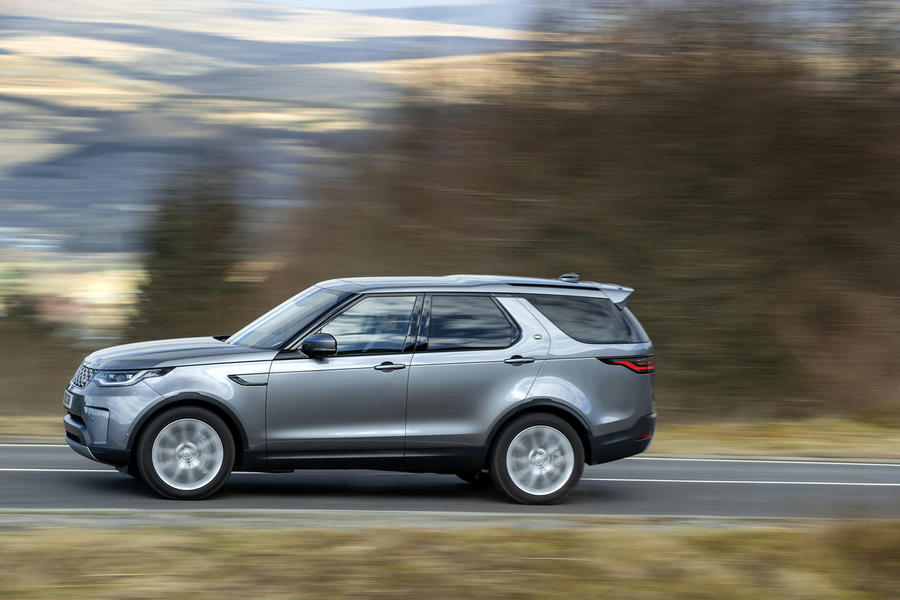 Elsewhere, the transmission tunnel is decluttered and wrapped in the soft-but-tough rubberised plastic that Land Rover now favours, and the second-row seats have been resculpted for improved comfort.

Other tweaks extend to new wheel designs (ranging from 19in to 22in), a subtler front grille and seamless LED headlights – although the offset rear numberplate stubbornly remains. R-Dynamic variants also get some more aggressive styling tweaks than the car tested here, though whatever the specification, the Disco remains handsome from some angles but a little ungainly from others.

As for the engines, the petrols are represetned by the four-pot P300 and the 3.0-litre mild-hybrid straight-six P360; on the diesel side, the V6 has been replaced by a new mild-hybrid straight six, which is available in D250 or D300 guises. In the D300, as tested here, power has fallen from 302bhp in the old V6 to 296bhp, and torque falls from 516lb ft to 479lb ft, but then so do CO2 emissions – handsomely – and official fuel economy is also up by around 10%.

A 48-volt electric supercharger (to work in conjunction with a conventional twin-scroll turbo) is the extent of the electrification, however. Almost every other Land Rover product is welcoming a plug-in hybrid to the line-up, but the Discovery will go without. Why? Because the large battery pack would raise the boot floor – prohibitively so for the full-size third-row seats, which Land Rover regards as one of the Discovery's USPs in this class.

Plug-in die-hards will miss out, though, because the updated Disco is as likeable as ever, if not more so. Noticeably improved is acoustic isolation, the big diesel now feeling smoother and more distant than the old V6 (this car wants for six cylinders for sure). And while the eight-speed gearbox isn't the most dexterous around, it's never flustered, and overall the driveline is decently deft on the road. You still have to think twice before overtaking, because the thing weighs more than 2300kg, but between the sensible gearbox calibration and the engine's easy-access torque, if probably wouldn't be too much of stretch to call the D300 'brisk'.

The P360 we also tried was quicker, slicker and more refined still, if quite a bit thirstier on paper.

The dynamic changes are harder to discern, although it hardly matters, because the pre-facelift car was hardly a handful. A BMW X5 is still plainly more agile than this updated Discovery, but the Land Rover really isn't that far behind. It handles tidily, and the recognisable combination of a high driving position, fluidly accurate (if light and leisurely) steering through the wide-diameter rim and a relaxed long-wave gait (with the odd bobble or bounce) continue to make it an easygoing delight on all manner of roads.

Confidence-inspiring, too, which is down to the fact the Disco hides it weight much more deviously than the Defender, if not quite as deftly as the Range Rover Sport. 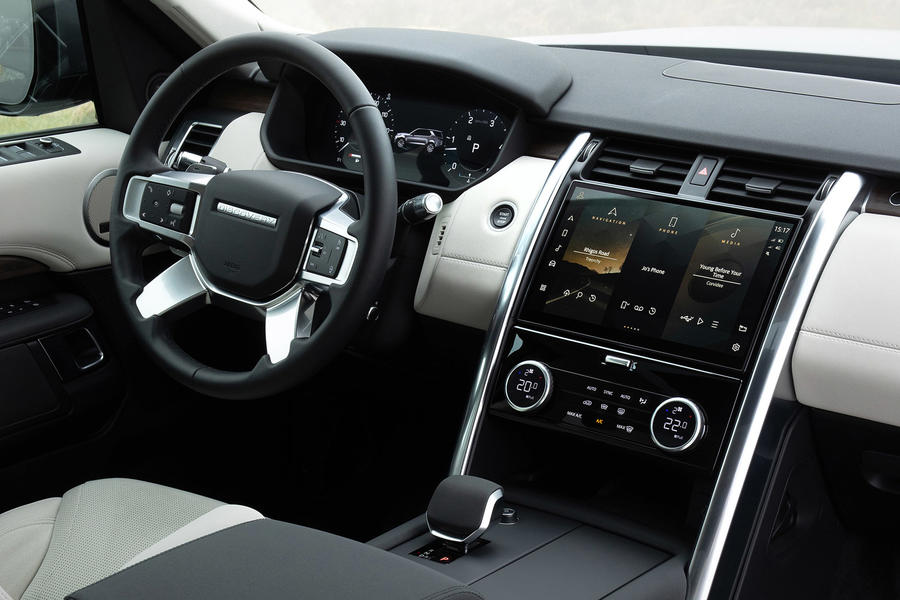 Particularly with its modernised and roomy interior, the unpretentious Discovery remains, in the true sense of the word, the most versatile car in its class.

In fact, if you're combining scores for off-road and on-road ability, nothing beats it. But even if you are only considering road-going prowess, the Land Rover is far from outclassed by its deliberately more car-like rivals. There's just something very appealing about the Disco's distinctive and unique lux-utility persona, and in many ways it makes its own brother, the new Defender, look like a try-hard.

It's still not quite as polished as some of the Germans dynamically, and the smooth MHEV diesel still isn’t especially efficient, but those after something authentic and almost endleslly usable should probably start here. 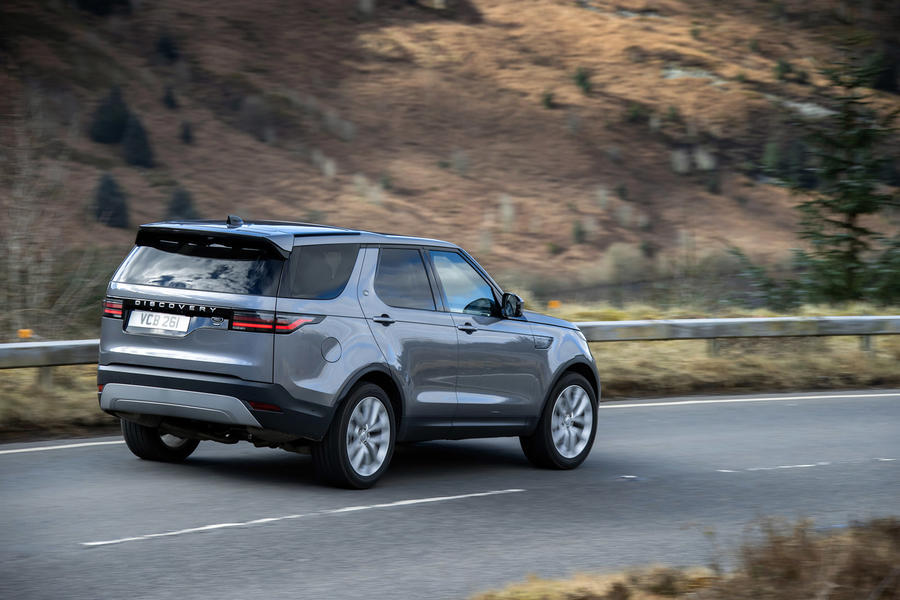 I love the way journalists mention the offset rear numberplate as if its responsible for the compromised looks of the Disco 5 - its nothing to do with it. The problem is someone got the basic proportions of the back end of the vehicle wrong before it was signed off, the rear end is just too big and angled oddly for the rest of it. You'll never change this without a major re-design which they're never going to do at this stage of its lifecycle. I read how well the Defender is selling, and that demand for used Disco 4's is very high - I wonder why.

This is probably the best iteration of the Discovery 5, and the most complete vehicle in LR history, although the D250 is just as capable, for a few grand less.

It makes a lot of sense for a largeish family in the UK and is probably the best ski trip vehicle ever invented ;-)

I'll be buying one of these later this decade (dv) as a long-range family car for when the great electric revolution sweeps these shores...

Pity it still has the Fat Annie rear end.