From £46,8008
Share review
Four-cylinder petrol from the Ingenium family is installed in Land Rover's seven-seat SUV. Is it up to the job?
Open gallery
Close

The Land Rover Discovery Si4, a four-cylinder petrol variant of the seven-seat luxury SUV, has been added to the range at a useful time to capitalise on the continuing slump in popularity of diesel engines.

The question is: can this turbocharged 2.0-litre inline four with 296bhp and 295lb ft really be a match for the kind of oil-burning unit that is traditionally found under the bonnet of practical-but-posh workhorses such as the Solihull-built Discovery?

The engine, part of Jaguar Land Rover’s Ingenium ‘AJ200’ family constructed at the engine manufacturing centre in Wolverhampton, has previously been added to the line-ups of the Land Rover Discovery Sport, Range Rover Velar and Evoque. 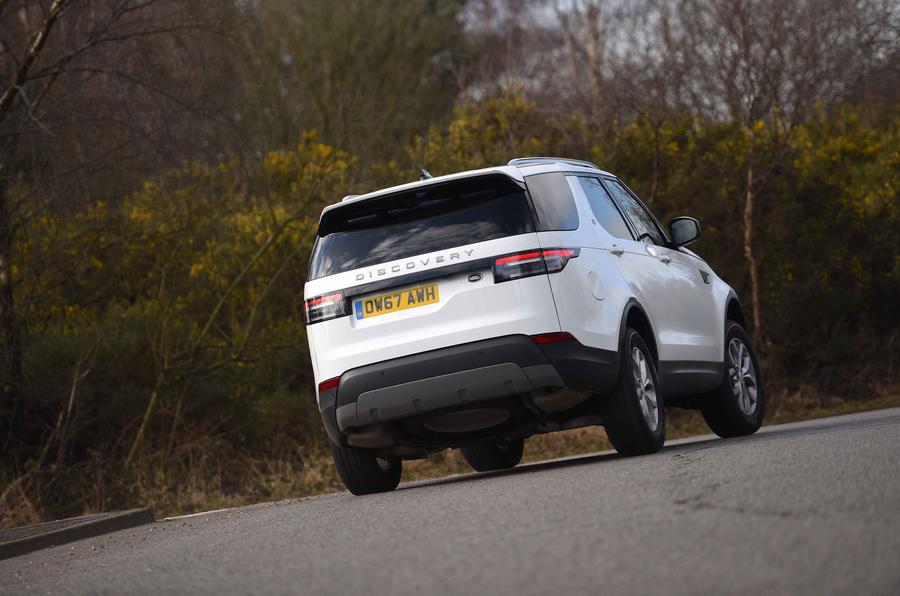 On the Discovery Si4, it is mated to the eight-speed ZF automatic transmission and four-wheel drive system that are ubiquitous across the fifth-generation Discovery’s range, which you can read more about in our full road test here.

Our test car came in SE trim, one up from the entry-level S specification, but it was still as well appointed as you’d hope a £50,000 SUV might be. Kit highlights include a 10.0in touchscreen infotainment system, air suspension, heated front seats, LED headlights, a 250W, 10-speaker sound system and leather front seats.

Options on our test car were limited to privacy glass (£400), a rear-view camera (£375) and 360deg parking assist (£280). The latter two proved useful for backing the Discovery into dauntingly tight multi-storey parking bays.

More accomplished than it might appear on paper. The petrol unit does a fairly spirited job of pulling this two-tonne 4x4 on motorways, A-roads, B-roads and around town. At cruising speeds, engine noise is muted and, allied with the general hush present within the  cabin, there’s a veneer of refinement you don’t get from diesel derivatives. In that respect, this new engine complements the 4x4’s laidback vibe rather well.

Land Rover claims 7.3sec for the 0-60mph sprint and there’s certainly decent enough urge from low in the rev range, although under load the unit seems to work harder to maintain your momentum than a more flexible diesel might. If you call on additional power, the eight-speed automatic transmission is kept quite busy shuffling up and down through its ratios.

Fuel economy could suffer as a result. Our 179-mile test yielded an indicated average of 27.3mpg against Land Rover’s claim of 29.4mpg, but if you spend a lot of time enthusiastically using a Disco as nature intended – dragging a horse box, brimmed with people, bounding along country lanes – you’ll do well to see that. 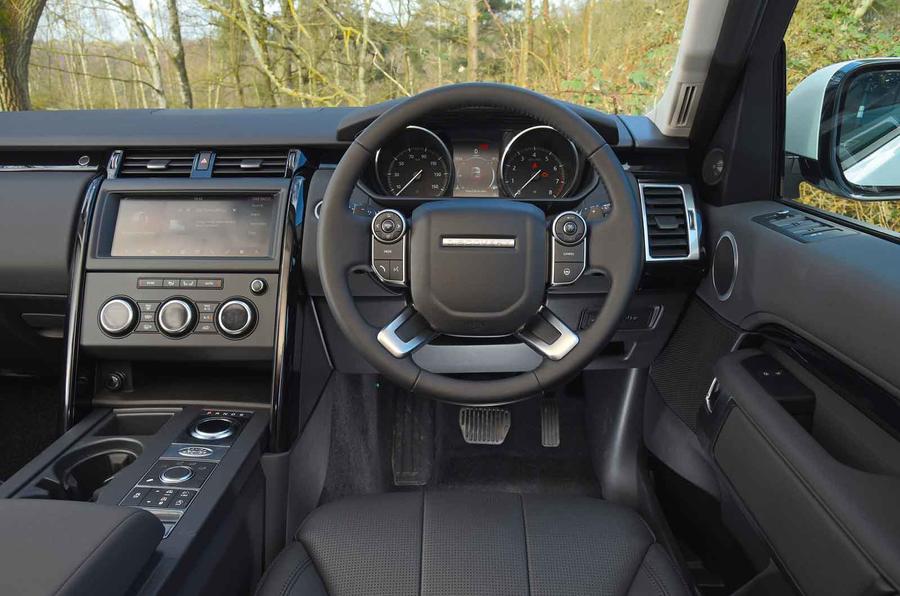 Elsewhere, the Discovery’s trademark traits remain. Its four-wheel drive capability and the ability to raise the air suspension to ‘off-road’ mode, which is up to 75mm higher than the standard setting depending on vehicle speed, ensure our test car dealt with the worst that the recent snow blizzards could throw at it with consummate ease.

The Si4 comes in at about 20kg lighter than the SD4, thanks to the lighter engine – a useful saving, if not one that has a tangible impact on the driving experience. This is a tall, heavy, comfort-oriented vehicle, after all, not one that reacts to being hustled with any particularly relish.

Time was that the least powerful petrol variant in a model’s range would often represent the entry point, but that’s not always the case these days. This petrol derivative is £700 more expensive than the 237bhp 2.0-litre SD4, which is the equivalent diesel. The petrol is quicker – not that raw pace is likely to be a primary concern for most Discovery drivers – but delivers inferior fuel economy and emits more CO2 than the SD4. It also spews out less in the way of particulates. 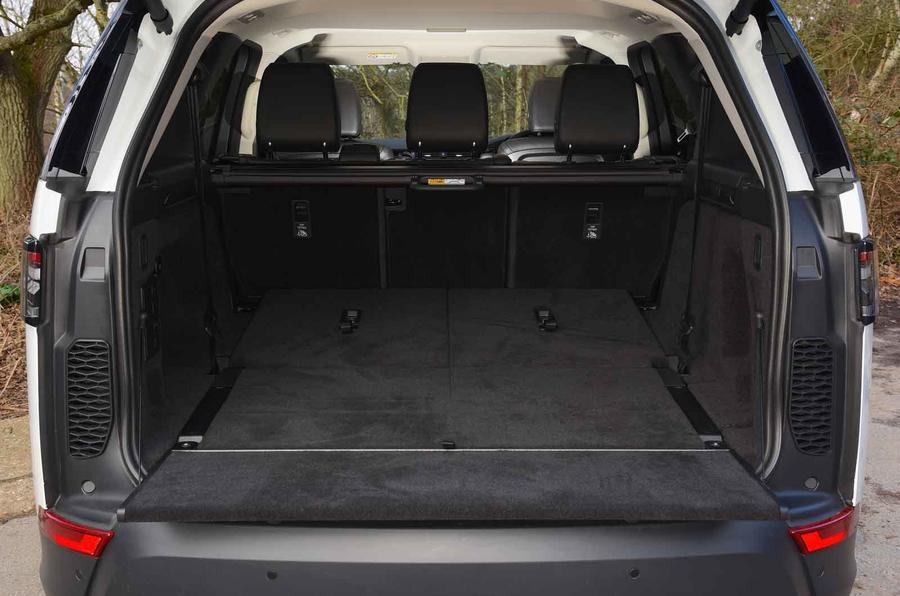 If you’re buying a Discovery for its style, space and useful high-riding driving position but don’t intend to use it to its full capabilities or load it full to the gunwales, this version could suit your priorities.

However, if you’re one of those buyers who intend to work their Discovery hard, tow trailers, occasionally venture off road, regularly achieve high mileages and desire additional frugality, it’s hard to look past the diesel.

produces 222g/km CO2 in a Discovery, but only 64g/km when mated to a hybrid system in the RangeRover P400, so now tell me its not a tax fiddle, and if its such an amazing hybrid system, why havent they fitted it in the Discovery?

produces 222g/km CO2 in a Discovery, but only 64g/km when mated to a hybrid system in the RangeRover P400, so now tell me its not a tax fiddle, and if its such an amazing hybrid system, why havent they fitted it in the Discovery?

I guess the hybrid powertrain is fitted only when and when it needs to be.  When your model range is made up of heavy, high Co2 producing vehicles, one or two models producing very low figures help pull down your overall figure, why do anymore than you need to.

I think the lines look ok but wouldn't be able to get on with the wonky number plate, does it really need to be of centre?
abkq 31 March 2018

The oddest design feature is

The oddest design feature is the body-coloured aggressively sloping thick C-pillar (all the other pillars are black and 'invisible'). It appears to grow upwards from the body to support the roof, and yet it is stopped by the black roof rail as a result of which the roof reads as a separate element.

How does Mr McGovern explain this?