From £28,9408
The latest generation of Ingenium engines make the Land Rover Discovery Sport better, but it still can't match the silky refinement of its rivals
Open gallery
Close

To the surprise of nobody, the Discovery Sport is Land Rover’s fastest-selling model. Just how popular is it? Well, consider that more than 200,000 have rolled out of the firm’s Halewood plant since it replaced the ageing Freelander in 2014.

That popularity is likely to now get a further boost with the introduction of Jaguar Land Rover’s latest four-cylinder Ingenium engines to the range, including two Si4 petrol options – of 237bhp and 286bhp – and the solitary SD4 diesel offering driven here.

Equipped with a pair of sequential turbochargers, the SD4 promises pretty robust performance, developing 237bhp and – more appreciably – a 367lb ft slug of torque from 1500rpm. The lesser TD4 makes 177bhp and 317lb ft by comparison, though both models share a nine-speed automatic gearbox supplied by German firm ZF. This feeds power to all four wheels, with Land Rover’s now-familiar Terrain Response programme optimising the chassis for everything from motorway runs to sand dunes.

As an aside, Land Rover will from now offer a front-wheel-drive version of the Discovery Sport – a base-spec model badged Pure – but only in 147bhp eD4 diesel guise.

The addition of these new Ingenium engines to the range also heralds an enlarged colour palette, some new interior trim options and alterations to the seat foam, though the interior, with its lofty driving position, remains handsome in a workaday fashion. 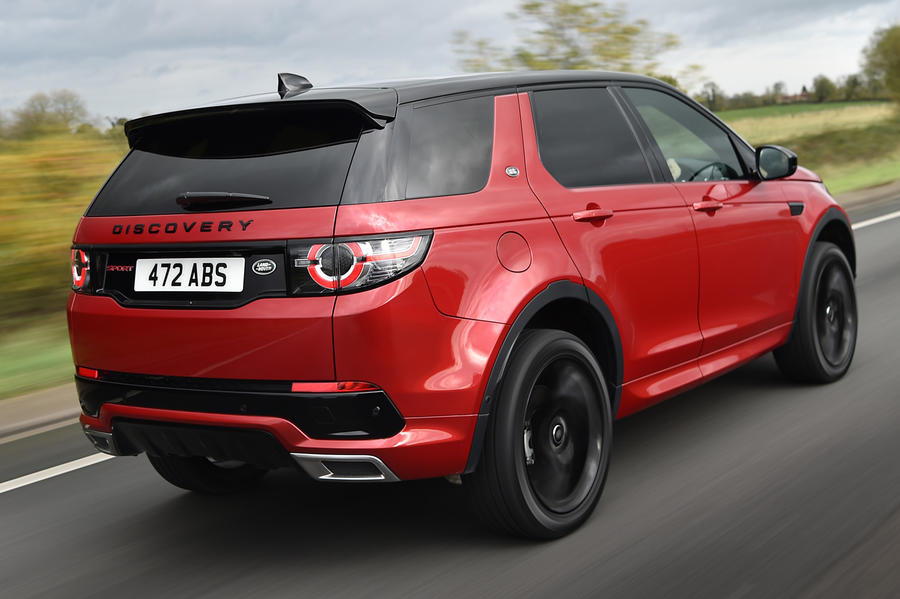 The SD4 is decently potent but not as refined as you might expect, with its rather gruff idle literally setting the tone for an engine note that’s never what you’d call intrusive but is always present. Certainly, those hopping from the polished confines of an Audi Q5 2.0 TDI might raise an eyebrow, although anybody acclimatised to the corresponding powerplant in the Nissan X-Trail would be pleasantly surprised. You could say, then, that this engine mirrors the Discovery Sport’s status as a premium product guided by utilitarian principles.

It is thirsty, though. Its combined fuel economy of 44.1mpg is bettered even by the considerably more powerful 3.0-litre TDI diesel of the Q5, which goes to show how far Land Rover has to go before its oil-burning engines match the best in the class. Given the Discovery Sport’s otherwise strong capabilities as a long-distance family tourer, it’s a little disappointing. Much the same can be said for the new Si4 petrol engines, which, as you’d expect, are markedly more refined but fall down on fuel consumption.

But what of that performance? A 0-60mph time of 7.1sec puts the new SD4 Discovery Sport on a level with warm hatches such as the Volkswagen Golf GTD, although it doesn’t always feel particularly quick. Not that it should, of course - just don’t be fooled into thinking all that torque is enough to make a two-tonne SUV feel sprightly. It isn’t.

Along with that bulk, the nine-speed automatic gearbox must also take some of the blame for the Discovery Sport’s steady modus operandi.

Okay, it juggled cogs with impressive ease while meandering along the Yorkshire Dales roads of our test drive. In fact, you barely notice as the rev counter's needle gently swoops up and down, smoothly keeping the engine in its sweetspot.

But frustrations arise when you require a sudden burst of acceleration – not uncommon on undulating roads like these, thick with slow-moving farm traffic – because there’s a lengthy delay before the transmission finds the most appropriate of its closely packed ratios. With the correct cog selected, the SD4 is forceful enough, but it just takes a while to get to that stage, and it’s a characteristic that can leave you floundering on approach to roundabouts should you never actually come to a complete stop.

Elsewhere, the Discovery Sport’s ride remains impressive at a canter but suffers occasionally over more pronounced road imperfections. It’s capable but a little rough around the edges, which, if you were feeling kind, you could once again say was in keeping with the car’s designated personality. 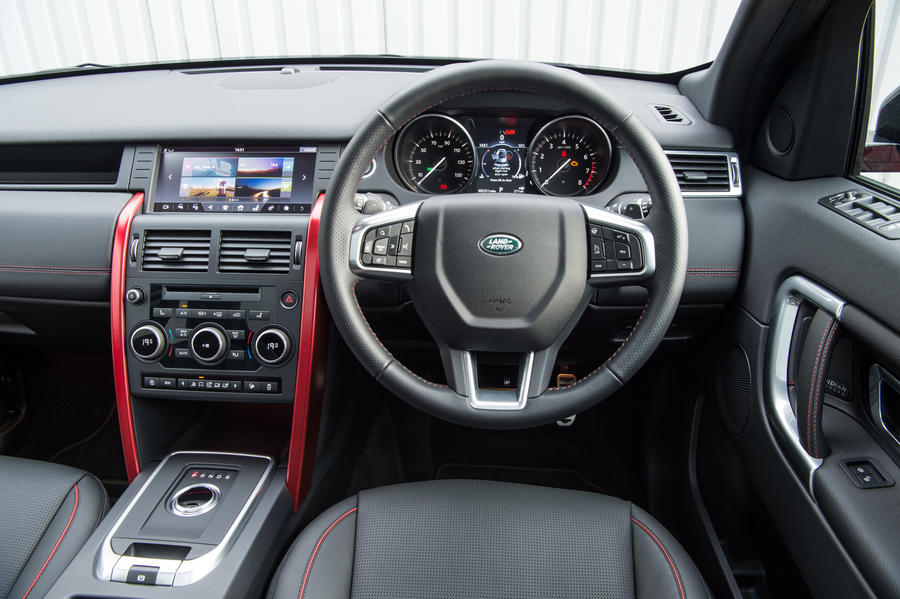 Propelled by its new Ingenium SD4 engine, the Discovery Sport remains an attractive, likeable, dependable but expensive quantity. This new engine is a good fit for the model but doesn’t necessarily do much to elevate it as a package, particularly in terms of fuel economy.

That you might well consider buying a Skoda Kodiaq instead is evidence of how far that particular Volkswagen Group subsidiary has come. In fact, the Kodiaq is more refined, has a larger boot and is better equipped than the Discovery Sport, as well as being substantially cheaper.

There are other rivals worth considering – the Q5 and the new Volvo XC60 are the most likely to appeal to prospective Land Rover owners – but neither matches the off-road capability – or charm – of the Discovery Sport. 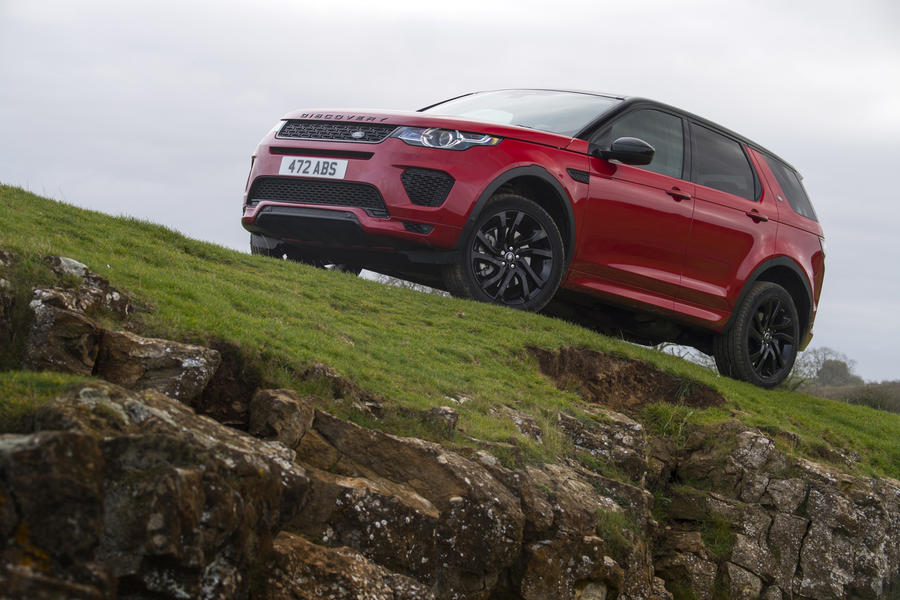 Saw one of these new ones

Already arrived in Russia guiys!!! The one I saw was sans registration suggesting it was a demo model prior to being registered for duty as such. Couldnt alctually make up my mind if I liked it. Need to sit in one but at that price doubt it will enter into the budget plans

4 stars for such an average

4 stars for such an average review/car? Ok engine; ok ride; ok performance; etc. Why would you choose this over the many rivals? I think the badge doesn’t hold credence with the poor reliability, either.

The engine seems fine, as good as any 4cyl D I have  driven, but it’s a bigish car with a complex perminant AWD drivetrain, the 9 sped auto is not that happy in commuter traffic, wonderful smooth dive but not economical in stop go situations. my feeling is the 6 speed auto in my old CX5 was better with a fast acting lock up clutch rather than the CVT like 9 speed.

The interior needs a tweak, small changes to improve the “infrotainemnt” system. smartphone mirroring and a less, eyes off the road reachy interface, a buff on some of the materials and textures, all would go a long way on this car.