From £28,9408
New Discovery Sport is comfortable, refined and incredibly well mannered – as long as you drive it sensibly
Open gallery
Close

Make no mistake: there’s a lot more that’s new about this updated Land Rover Discovery Sport than immediately meets the eye. Sure, it looks largely the same as it has since the original model replaced the long-standing Freelander back in 2015, but so extensive are the changes made beneath the skin of Land Rover’s best-selling (and arguably most important) model that simply labelling it a mere facelift almost feels like selling it short.

You see, in addition to giving the Discovery Sport a subtly tweaked exterior and a new interior that looks and feels far more Range Rover-like than ever before, Land Rover has completely replaced the architecture upon which it’s based. Originally, this was a fairly heavily reengineered version of the LR-MS platform that underpinned the first-generation Range Rover Evoque, but this has now been done away with and replaced by Land Rover’s latest Premium Transverse Architecture (PTA) - the same platform that, funnily enough, also underpins the second-generation Evoque.

Unsurprisingly, this is quite a big deal. Along with the improvements in body stiffness, cabin isolation and passenger safety that the introduction of the PTA platform allows for, an ability to accommodate electrified powertrains has been at the forefront of its development process.

And so the Discovery Sport is available with a range of transversely mounted four-cylinder petrol and diesel engines, most of which are now complemented by a 48-volt mild hybrid architecture - much like what you get on the new Evoque. That said, it’s a front-wheel-drive (yes, you’re reading that correctly), non-hybrid 148bhp diesel with a six-speed manual gearbox that represents the new Discovery Sport in its most efficient form, with CO2 emissions as low as 140g/km and official combined fuel economy of 47.8mpg.

Call me cynical, but I reckon that entry-level model is there largely so that the Discovery Sport’s ‘emissions from’ strapline will look a bit more appealing in the brochure. After all, this is a Land Rover, so you’d expect most customers to skip over that particular variant and head straight for the 4x4 models. Well, you’d hope they would, anyway.

If the wider model line-up is anything to go by, Land Rover seems to think this will be the case, too; four-wheel-drive models (all of which come with a nine-speed ZF automatic gearbox) account for the meat of the range. In the black corner, that same 148bhp unit starts things off at the lower end of the power spectrum, and is followed by 178bhp and 237bhp oil-burners. For those who prefer to take their fuel from the green pump, there’s a choice of 197bhp and 247bhp petrol engines too. Later this year, a plug-in hybrid model will also join the range.

In addition to their mild hybrid architecture, the four-wheel-drive models feature Land Rover’s Driveline Disconnect system. At a steady cruise, this in effect makes the Discovery Sport front-wheel drive - which should theoretically allow for greater marginal gains in fuel economy. 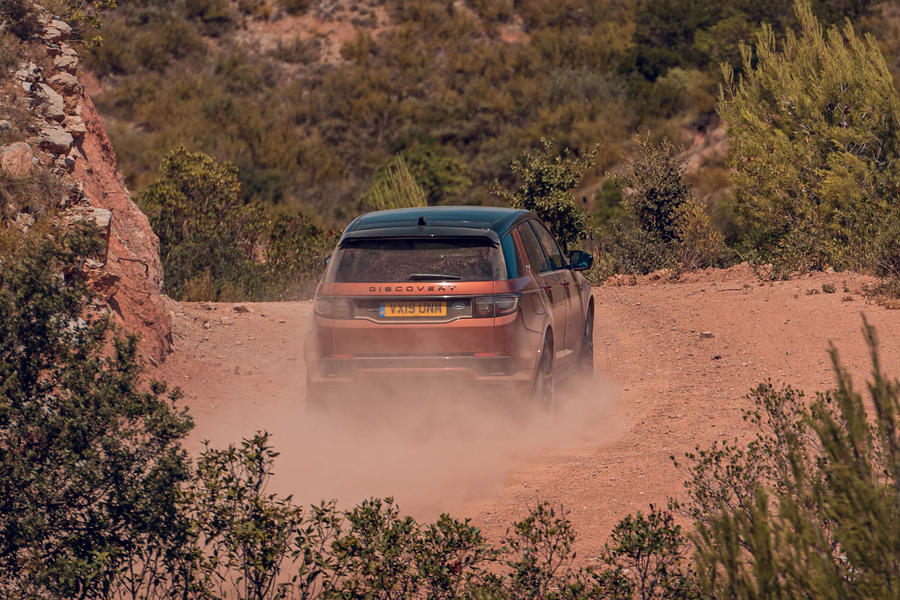 Speaking of economy, our 237bhp diesel R-Dynamic S test car - which came with a five-seat layout, as opposed to the optional seven - claims a WLTP-certified figure of 39.6mpg, while CO2 emissions stand at 187g/km. Combined with that nine-speed auto ’box, it makes for a likeable - if not entirely convincing - powertrain.

For starters, it feels nowhere near as quick as its 7.7sec 0-62mph time suggests it should. It may have 369lb ft of torque to call upon, available from crank speeds as low as 1500rpm, but in a car with a DIN kerb weight of 1934kg (and probably more than 2000kg in real-world terms), that doesn’t amount to much.

There’s a hint of mid-range punch when you plant the throttle, but the rate at which this heavy SUV gathers pace is unequivocally relaxed. There’s certainly enough urgency here to overtake slower cars, but you’ll need plenty of room and a generous amount of patience to do so. Despite its position at the top of the diesel range, this D240 model isn't what you'd call especially quick.

But then again, in the context of a large four-wheel-drive family car that’s capable of travelling quite a bit farther from the beaten track than most of its competitors, a shortage of straight-line performance isn’t the end of the world. More of a concern is the fact that, when you do need to accelerate with some sense of urgency, the gearbox has a tendency to be rather indecisive.

Strangely, throttle response in terms of being able to encourage kickdown is generally good, but there’s quite a lengthy delay between the prod of the accelerator that prompts said kickdown and the gearbox actually finding the gear it’s looking for. You can see the rev counter spiralling towards the redline without any improvement in straight-line pace as the ’box appears to rifle around in its bag for the right ratio. And when it does eventually find what it’s looking for, it then tends to hold on for just a bit too long - so an already slow motor begins to sound and feel even more out of breath.

There is good news, though. Driven at a relaxed pace, it’s a fantastically smooth and refined engine. In fact, so good is the engine isolation that from within the cabin you barely even know it’s chugging away when you’re at a standstill. That said, at motorway speeds the car's reasonably bluff front end and chunky door mirrors generate a fair amount of wind noise, but it’s a relatively minor grievance.

The Discovery Sport also handles very well indeed. Not in a sporty fashion, but with plenty of quiet confidence. Much like its predecessor, you don’t get the sense Land Rover has tried to make the Discovery Sport behave like a saloon on twistier roads. So you get slower yet impressively precise steering, much more pronounced levels of controlled body roll and sturdy front-end grip that gives way to progressive understeer if you push a bit too hard. It’s a handling character that’s entertaining and enjoyable enough without feeling contrived or put on, and it’s all the better for it.

On optional 21in wheels, the Discovery Sport has a tendency to sniff out ruts and bumps, but generally it's a very comfortable place in which to spend time. Its primary ride is buoyant and soft-edged, endowing it with a relaxed, calm gait on undulating surfaces. 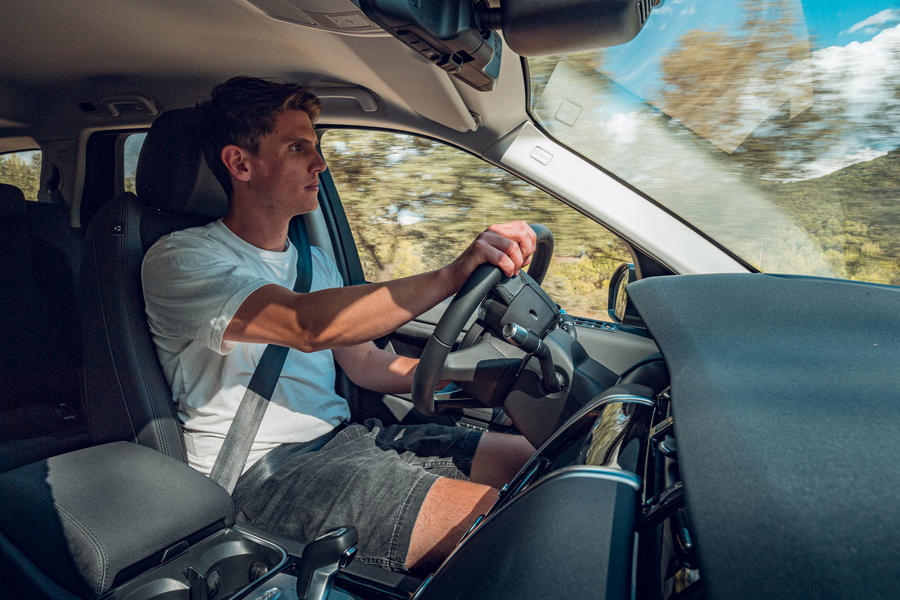 Prices for this revamped Discovery Sport start at £31,575 and can rise as high as £49,675. While our R-Dynamic S test car’s £43,975 price tag seems like pretty good value against a BMW X3 xDrive20d M Sport (£44,015 for a less powerful four-cylinder diesel engine), it’s worth noting that the options fitted would easily push that price up closer to £50,000 - if not further.

The Discovery Sport may not have the dynamic finesse as the X3, and its four-cylinder diesel engine may not muster quite the same level of refinement, but this feels like a more earnest take on what a family SUV should be. That you can have one with seven seats, and take it through rivers and up mountains far easier than you could any of its rivals, will no doubt sweeten the deal for plenty of people, too. 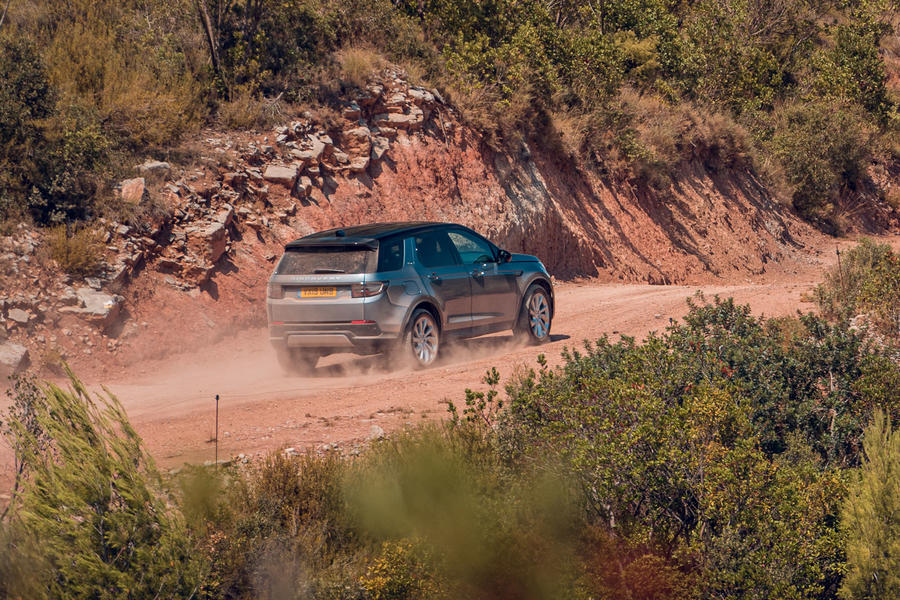 The review makes reference to off-road capability but gives no information on hardware or capabilities. Also, what about towing weights and load-carrying capacity? Probably all far more relevant than how it doesn't deliver when pushed to the limit on the road.
Paul Dalgarno 13 September 2019

So it’s ridiculously heavy and slow

It will be interesting to find out the extent of any possible engine/powertrain collaboration between them. Everyone is very quiet here (BMW) about it. JLR won't can Ingenium, it owes too much, early units were under developed, they switched off their supply contract for the old 2.2 unit assuming Ingenium would be ready, it wasn't, the project lagged but they had to release the engine before it was where they wanted it. They've caught up now but it's still not the greatest. I can only see them sharing V engines, it's the only deal that makes sense.

Nope but I did take a 2 hour test drive

I tested one as an option before I bought a Qashqai. It was over priced, overweight, uncouth, slow, and noisy. Didn’t handle even at moderate speeds. This one is also slow, also overweight, and doesn’t handle.

I can accept handling is not the priority, and that it’ll run rings round most SUVs off-road, and discount this, but the weight, speed, and economy is still terrible (not poor, but actually terrible).

Why the aggressive reply?  I bet you’re a wet blanket in real life that wouldn’t say boo to a goose to someone in person. Your comment adds zero to the debate, and you’d be better served making your argument about the car.