From £40,0008
New seven-seat SUV has impressed in hybrid form, but how about with its new diesel engine?
Open gallery
Close

It’s no surprise that the new Kia Sorento has been launched as a trendy petrol-electric hybrid, nor that it will soon become available as a Sorento plug-in hybrid too. What might raise an eyebrow, though, is that the diesel option has survived into the model’s fourth generation.

Sales of diesels won't stop plummeting, not just due to the bad taste left in the public’s mouth from the Volkswagen scandal but also because company car tax rules now make hybrids, particularly PHEVs, the obvious choice. However, if diesel survives anywhere, surely it will be in repmobiles, for long-distance economy, and large SUVs, favoured as they are by those who tow caravans, horseboxes and suchlike.

And the new Sorento is certainly a large SUV, being even longer and wider than its predecessor, at 4810mm and 1900mm. Thankfully, that extra metal is compensated for by a new, lighter engine 2.2-litre four-cylinder diesel engine, which produces 199bhp and a healthy 325lb ft of torque. Both the hybrid and PHEV, meanwhile, make just 258lb ft.

That extra torque you trade for CO2 emissions, with the diesel falling into the top benefit-in-kind tax band of 37%. The PHEV’s WLTP figures have yet to be confirmed, but we know how ridiculous these usually are. For instance, you pay just 10% for the P300e plug-in hybrid version of the Land Rover Discovery Sport – which is probably the Sorento’s biggest rival.

Like the Korean car, it’s a large, luxurious, seven-seater that costs from around £40,000 and offers both hybrid and diesel power. If you still think of the 2002 original when picturing the Sorento – a gawky, body-on-frame 4x4 – you couldn’t be further from the truth. The Kia badge is steadily gaining prestige and respect, and products like this show exactly why.

Even compared with that of the old Sorento, the interior is serious business. The materials in all the key places feel of high quality, touches such as a stylish light motif on the front doors make it feel special and the seats are comfortable – but it’s probably the technology that impresses the most.

In front of you is a clear, configurable 12.3in digital instrument display, and in the centre of the massive dashboard is a 10.25 touchscreen. It will take a while to get used to, but the functionality is thereafter simple and comprehensive; it certainly doesn’t feel like it has been just lifted out of a Ceed or something, and it never once lagged or crashed during our test.

Also, while we would normally dismiss the ‘ambient soundscape’ options as a gimmick, sitting in a big, warm leather chair with your eyes closed and having the car fool you into thinking you’re in a coffee shop or summer forest suddenly sounds very appealing as we enter a winter lockdown. 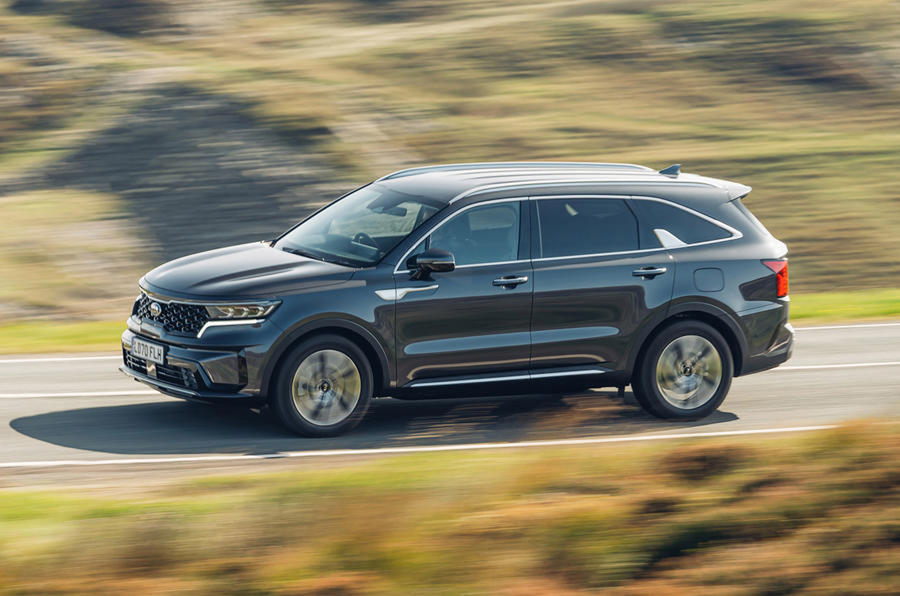 We’ve already established on our drive of the Kia Sorento hybrid that the new car can be very comfortable, albeit not quite as much as its Land Rover rival. Although it feels somewhat starchy at lower speeds, suppleness only increases as does speed, turning this SUV into an appealing motorway express, even if its suspension could be quieter.

Also that the handling is nothing to write home about – who’da thunk it? – but nothing to complain about either. While you’re certainly always aware of the Sorento’s girth, tight streets never strike fear into your heart, and at higher speeds it’s solid and dependable. Yes, there’s plenty of body lean if you hustle it, but not in the way that makes you doubt its composure. It also avoids that floaty feeling ingrained in some large cars, which is good news for parents.

It’s the engine we’re focusing on here, and Kia’s new Smartstream unit definitely isn’t one that sounds like it could have come out of a Massey-Ferguson. Starting on wet November nights made it grumble, sure, but it always remains impressively isolated from the cabin. The new diesel in the Land Rover Discovery Sport is whisper-quiet, mind you, as is that offered by the Audi Q5.

It’s not weak, either; in fact, its pulling power might take you aback somewhat the first time you boot the accelerator pedal. Despite weighing just shy of two tonnes and being of a size that wouldn’t look amiss in Texas, the Sorento diesel charges forth, hitting 60mph in 9.1sec.

It also picks up decently when the speed limit changes or you’re pulling into the other lane for an overtake. This is helped by its eight-speed gearbox, which is usually adept at going unnoticed – although it does occasionally suffer from the alarming lethargy when you go to jump into a gap in the traffic that afflicts most modern automatics, as they’re tuned for fuel-saving.

There are a number of driving modes, too, with Comfort proving the best in our view for the road; Sport, which turns the digital dials a racy silver, simply makes the gearbox hang onto ratios for too long, producing unpleasant over-revving. If you're out in the country, it will be comforting to know that there are mud, snow and sand specialities as well as the standard four-wheel drive.

As for economy, we scored mpg in the low 30s, which is far off the official 42.2mpg, but then our test was mostly in urban areas and included some driving in which frugality was firmly back of mind. In any case, most rivals would achieve around the same, given their size.

On that subject, larger families will be taken with the Sorento, because even smaller adults can fit into the third row – which is clearly far from an afterthought, given the seats are almost the same as those in front; they even get their own cupholders and USB charging ports for the kids’ iPads.

They’re easily accessible as well, past three middle seats that slide back and forth in a split. 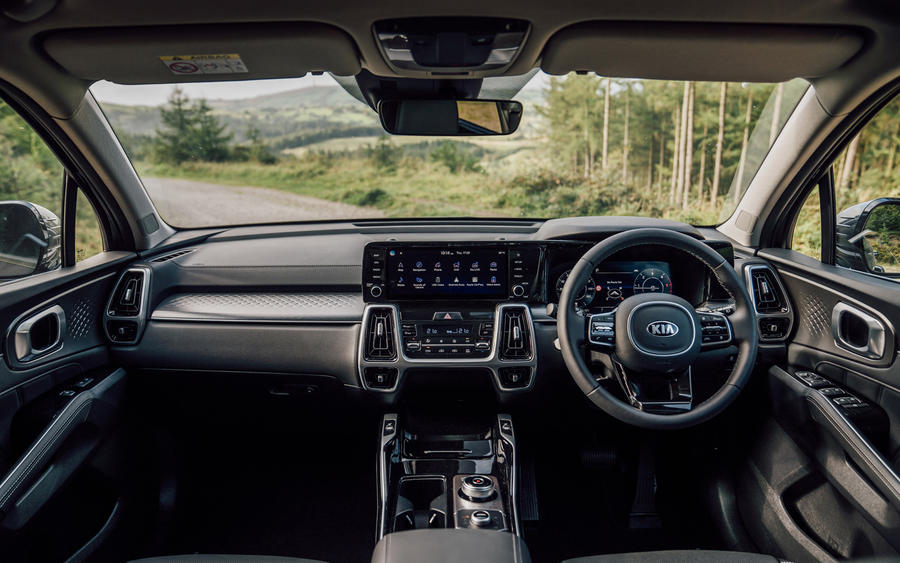 If you’re looking for a seven-seat SUV, or indeed just a large, practical car, you could do a hell of a lot worse than this. Such has been Kia’s progress in recent years that mention of it has become clichéd, but you could seriously consider the Sorento against the Discovery Sport. It really is a crazy amount of car for £41,245.

As for whether large SUV drivers should stick with diesel is completely down to usage. For towing, definitely. Its capacity is a huge 2500kg, by the way – half a tonne more than before. For those who have a long motorway commute? Again, probably the wise choice.

But for everybody else, the hybrid is the sensible option – and, if you can afford the step up in price, the plug-in hybrid even more so. Being able to drive this big, comfy car silently and without the guilt of knowing how wasteful you will look to some will surely be very pleasing. 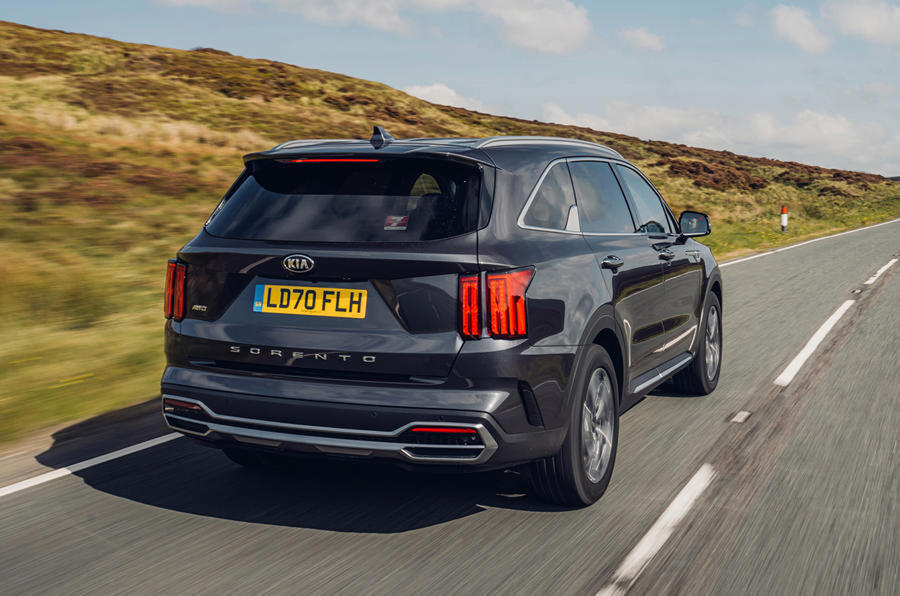 You've got to consider

You've got to consider depreciation in this. A Discovery Sport will save you mega bucks in that respect.

...it's as ridiculously priced as all the other inflation-busting over-priced money pits out there now.

The author of this article is clearly unaccustomed to driving anything larger than a Fiesta, judging by his constant references to the Sorento's allegedly 'large' proportions. As the worldy-wise will know, the Kia is just another mid-size family SUV. And his bizarre claim that it's particularly suited to Texas - where the full-size Tahoe, Suburban, Expedition and Yukon reign supreme - further demonstrates the limitations of his knowledge.

Sadly Mr Culmer's ignorance extends to British products too, as the Disco Sport ain't a large SUV either. In fact it's less than 4.6m in length, which is considerably shorter than medium-size saloons such as Mondeo, Insignia, Passat etc.

Am I alone in wondering if the British motoring press is actively collaborating with auto makers to persuade consumers to pay big car money for ordinary motors?