From £37,3607
Share review
Hotrod SUV doesn’t know much in the way of delicacy and isn’t at all good mannered. But would you want it any other way?
Share
Open gallery
Close

Just when Europe needed an abuse test for its newly certified WLTP emissions labs, Fiat Chrysler Automobiles has generously provided one in the shape of the new Jeep Grand Cherokee Trackhawk.

This is the first car in a new order of performance SUVs from the original American 4x4 brand. It uses the supercharged 6.2-litre Hemi V8 of the Dodge Challenger Hellcat, which puts a frankly unhinged-sounding 700bhp and 640lb ft at its disposal.

And so the Trackhawk now joins the super-exclusive ranks of two-and-a-bit-tonne 4x4s that can crack 0-62mph in less time than it took the Ferrari F40 in 1987 (3.8sec). This Jeep and the Lamborghini Urus are the founder members of that little club (what a pair), but expect them to be joined by Porsches, BMWs, Mercedes-AMGs and others before very long. 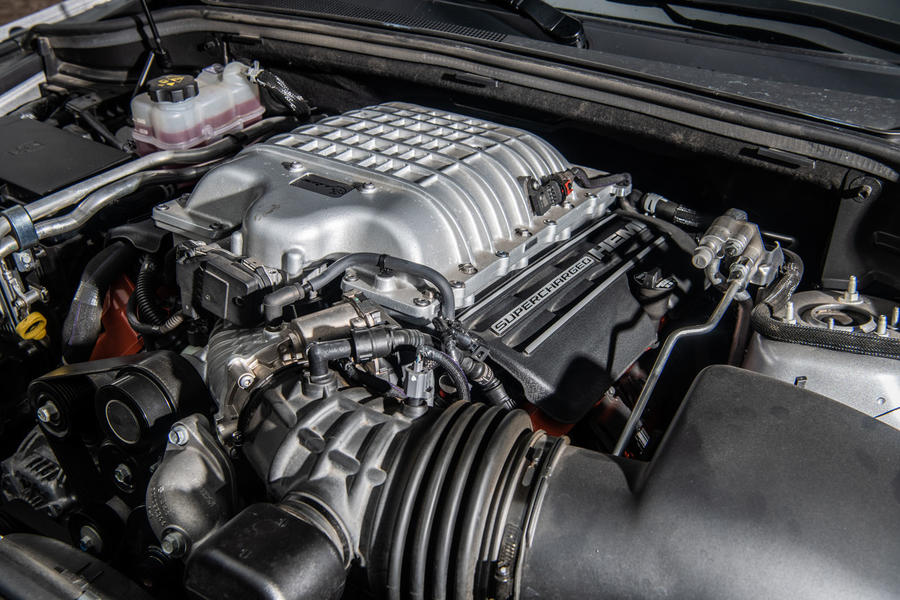 Meanwhile, Jeep has timed this car (and it has an onboard launch control acceleration timing app that allows you to verify this for yourself) doing 11.5sec standing quarter miles – which is pretty much Porsche 911 Turbo or Nissan GT-R pace. And if the mere idea of such a thing seems more than a bit absurd? Just wait until we get on to the reality.

The Trackhawk’s V8 is the kind of engine that clunks roughly into drive and then doesn’t so much creep as heave its way forward at idle. Thank heaven there’s a warning light to tell you if you’ve left the foot-operated parking brake on, because it might take an awfully long time to notice otherwise.

Despite having a widely leather-bound cabin and a good amount of onboard infotainment tech available, the Trackhawk isn’t a very convincing luxury SUV. Jeep’s interior fittings aren’t very rich or substantial and its infotainment set-up doesn’t exactly flatter a £90,000 luxury car. In fact, a direct comparison between this driving environment and the one in the Audi SQ7 or Porsche Cayenne Turbo wouldn’t be too flattering on the Jeep any which way you looked at it. 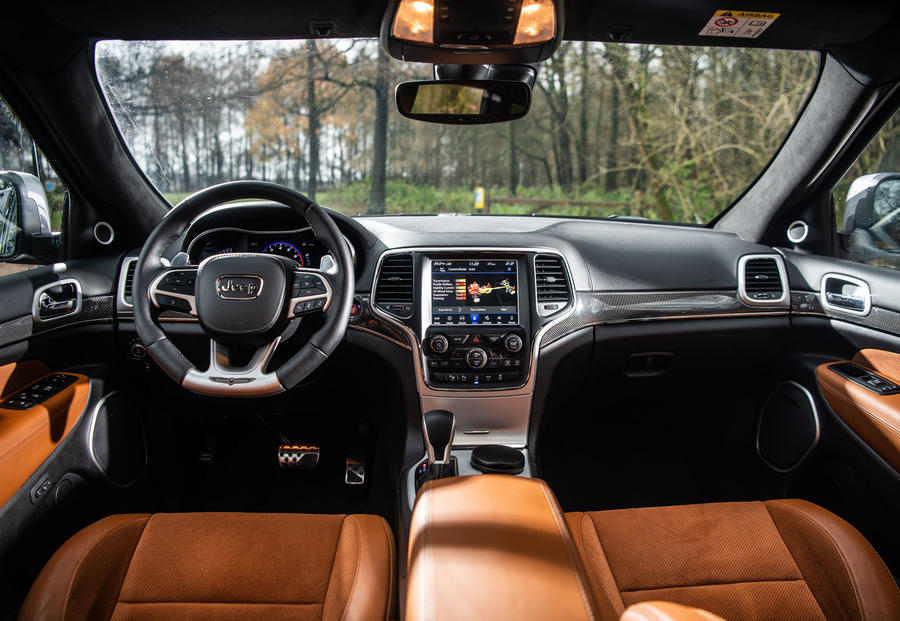 There's also little you could call refined about this car’s driving experience - not that you’d change much about that. The Trackhawk bristles with the vociferous energy of that megastar engine at all times. It rumbles and woofles away on a trailing throttle, only to go through layers of sonic transformation as you probe into the accelerator travel.

The distant whine of that supercharger gets gently faded up as you tip into the pedal, getting louder through the middle of the range, only for more crackling combustion noise to come fighting back as you begin to feel the carpet under the edges of your shoe. Few modern performance engines are as characterful, as exciting or as wonderfully, rabidly genuine to listen to. And I’m not sure if any provides a more incongruous or improper-feeling turn of speed, which builds to a deliciously dramatic and noisy crescendo at high revs like the perfect antidote to the modern sledgehammer turbo V8.

The Grand Cherokee's chassis works well enough as a delivery mechanism for the charms of that engine up to a point, although it’s hardly what the engine deserves. Some seriously uncompromising suspension spring rates attempt to cover for the absence of many of the technologies that help the Jeep’s rivals to apparently defy physics and handle so well, such as active anti-roll bars, proper torque vectoring and four-wheel steering. And so the Trackhawk’s low-speed ride is fidgety and brusque, and higher-speed composure is less than assured at times. The suspension has adaptive dampers, but the Jeep still lacks the breadth of range that might otherwise allow you to relax at the wheel and cover big miles at a fast, effortless stride.

Lateral body control and handling balance are both good, though, and there’s certainly enough togetherness and composure about the rest of the Trackhawk’s dynamic picture that you can thoroughly enjoy a brisk strop down a fairly smooth road. Vertical composure over tougher roads is less good, and the car’s stability thereon isn't helped by steering that’s overly light in most of its driving modes and could better communicate front tyre load, but neither problem is too objectionable or persistently bothersome. 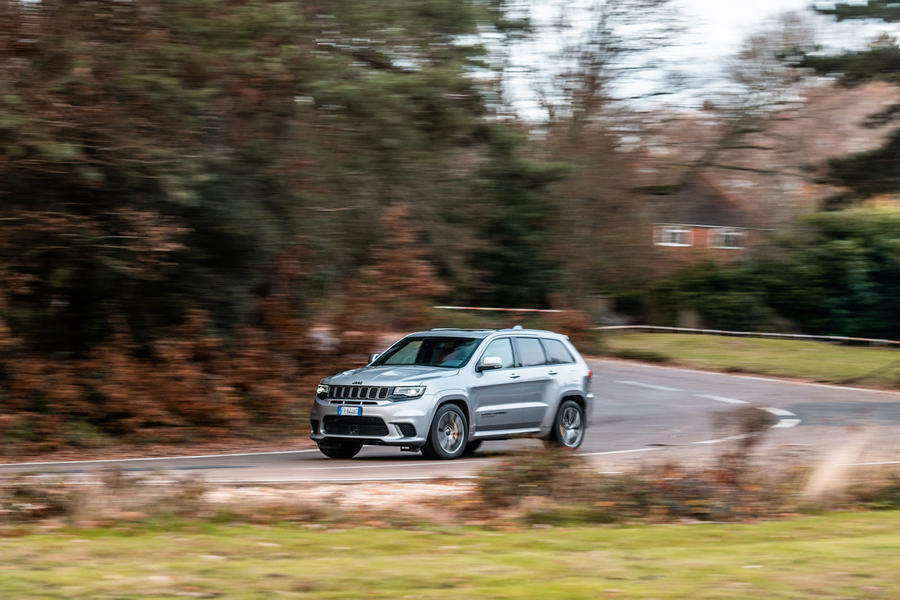 If you’re the sort of person who thinks that if you’re going to offend your neighbours and risk your social standing with a fast SUV, you might as well do it properly, get yourself a Helljeep. That’ll do it.

Moreover, if you’ve owned and loved proper American muscle cars but your life has developed beyond their typical range of usability, the Grand Cherokee Trackhawk might even deserve to be the only car in your thinking. It is, for its many and obvious flaws and failings, a superbly singular thing.

From a simple bang-for-buck perspective, is there another way to buy 700bhp straight out of the showroom for £90,000 at the moment? Not that I know of. Is there a more straightforward, direct, unpretentious and genial car than this among a fairly disagreeable bunch of modern super-SUVs? If so, I’m not sure I’ve driven it. 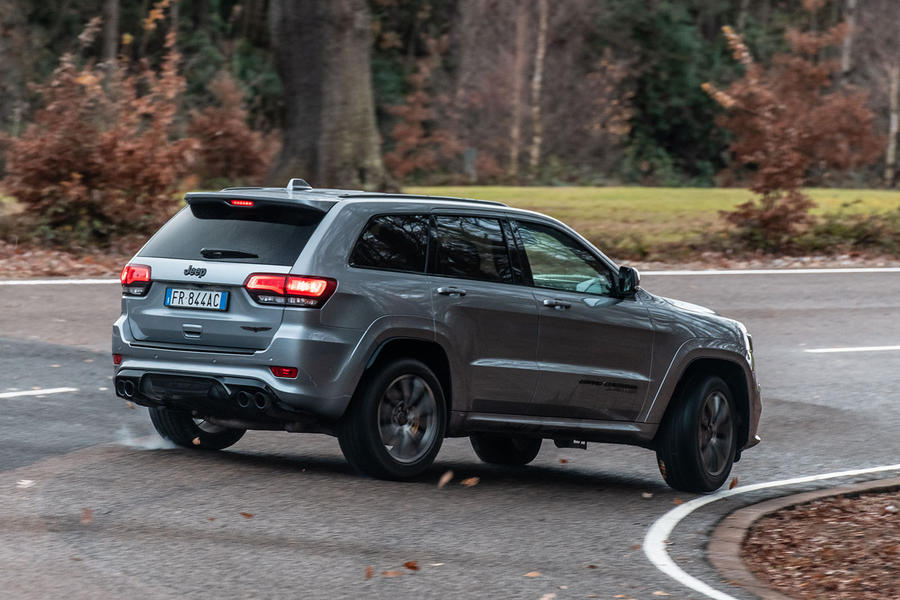 The only serious word of warning we would give to prospective customers concerns tyres. We tested an Italian-spec, left-hand-drive car on Pirelli P-Zero tyres, which, oddly, won’t be available in the UK; here, the Trackhawk will come on 'all-season' rubber as standard. Shall we pause and think about that for a second? 700bhp, 2429kg and super sports car pace, all on squirming treadblocks. Gulp.

I wonder if ‘one-season’ might be a better description for those tyres, given the torrid time a Trackhawk might give ‘em. I also worry about what they might do to a handling compromise that doesn’t have abundant lateral grip or stability at the best of times.

All of that stuff’s just a hunch, of course. Maybe the Pirelli Scorpion Verdes are entirely up to the challenge. But if it were my car, I’d put a set of proper performance ‘summer’ tyres in the corner of the garage to be fitted sometime in late April 2019. And then I’d be delighted just to worship at the altar of this car’s V8 as regularly and as zealously as I could get away with.

This is a stupid car, but I

This is a stupid car, but I loves it!

Fiat Chrysler lost their minds while signing this for production, but I love them for that.

This should be filed under 'guilty pleasures'. I know I shouldn't but if I had the cash to buy (and run) one, I would. Nice to see Matt talking about the importance of having the right tyres for the job; there isn't enough awareness of how critical tyres are.

So very easily the most

So very easily the most appealing of all the fast SUVs.  Even the crappy bits add rather than detract - not being like an Audi is the higest of compliments.

It has back-to-basics raucous charm, doesn't pretend to be saving the world, and is very specifically intended to make the driver smile - a quality long forgotten by most.

I know someone who very recently bought one and I asked him about it. Half his conversation was lamenting the fuel consumption. I somewhat dozed off, although the number 8 seems to have stuck with me.

They say there’s a Car for everyone, one we like, we don’t necessarily like each other’s choices but there you go, the human nature for you, so this beast is a good ol’ Uncle Sam Hotrod in SUV form, reading between the lines I think it’s a handful if you go near the limit, and where’s the fun in that?, wondering if it’s going to Chuck you off the Road if you overstep the mark, nope, for £90K I could think of loads of Cars I’d like to buy, old and new than this SUV.....

Peter, please tell me.  Whatever would you be doing 'near the limit' in a Jeep?

Esaton@, you obviously lead a senditary life, near the limit is where your most alive, just at the point between life n death, never heard that before....?

I think it is time for Peter

I think it is time for Peter Cavellini to leave his mother's basement....

FR12@, only if you stop having a Shandy every Night?