From £90,0858
Flagship Jaguar XJR now puts out 567bhp from a supercharged 5.0-litre V8 as part of a wider XJ revamp, but is it a match for an S-Class?
Open gallery
Close

I almost wonder if the most important thing to know about the Jaguar XJ is that there’ll definitely be another generation after this one. “A flagship car company needs a flagship car,” says Ian Callum, Jaguar’s design director.

But that it even came up for discussion – it wouldn’t with the Mercedes-Benz S-Class or BMW 7 Series, you suspect – shows you where the XJ is. Celebs phone Jaguar and say they’d like to arrive at events in the back of an XJ because not many other people will. It’s starting to become a hero of its own lack of success.

Anyway, this one has been around for seven years now. Doesn’t quite seem possible, does it? So here it is. Surely, we’ll see the new one in the next couple of years – and Callum says it’ll be “wilfully different” from something like an S-Class “because there’s no point taking them on at their game”. Which sounds fair. Meanwhile, though, the current XJ has been given a range of tweaks to make it, if not an all-singing, all-dancing technological marvel, then at least humming gently and tapping its foot. I’d forgotten how broad the XJ range is – depending on where you live.

You can have a 3.0-litre diesel, which is what most UK buyers have. But there’s also a 3.0-litre supercharged V6 petrol, which can be had in rear drive or all-wheel drive (AWD). Then there’s the 5.0-litre V8 petrol, which is itself available in three versions. There’s one with 464bhp, another with 503bhp and then there’s the full-fat XJR 575, which now has 567bhp (575PS) rather than 542bhp. And all of these can be had in standard or long-wheelbase styles.

Jaguar Because the XJR is the only one in the range to have received a power increase, that seems like the most suitable car on which to base our review of the 2018-model-year car. No other reason at all. Definitely not that it also has the ability to smoke up its tyres at will and that this sounds like a giggle. No, no. 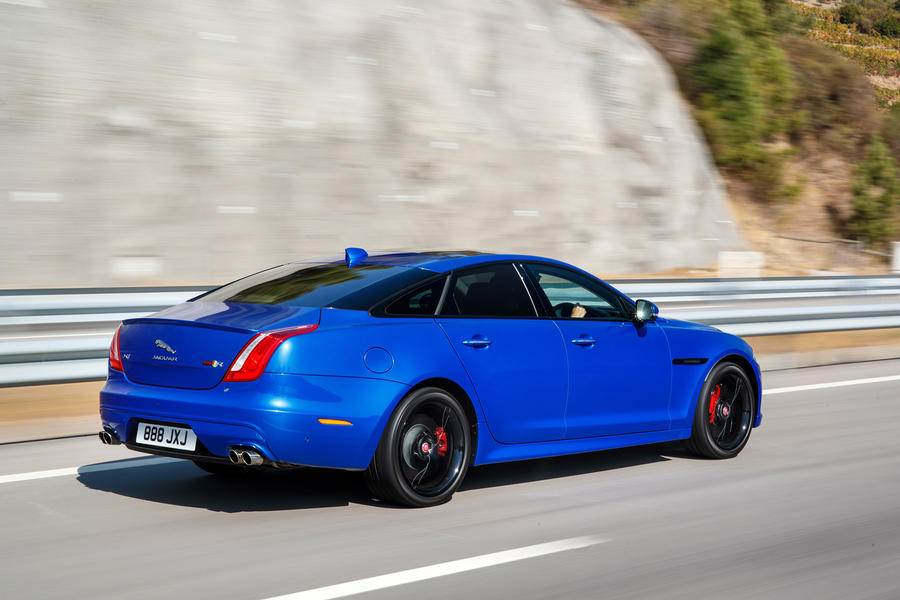 Jaguar All rear-driven XJs receive electric rather than hydraulic power steering (although the AWD retains a hydraulic rack). There’s a new 10.0in touchscreen in the middle of the dashboard and around all of that comes updated software, plus some new technological and active safety features such as lane keeping and parking assist (hence the electric steering), city braking and radar cruise that can take you to and from a standstill.

The nice thing about the XJ has always been that it is wilfully different from the German luxury car club. I can feel people at Bentley wincing at the word ‘luxury’ even as I type it. An Mercedes-Benz S-Class isn’t luxury, they’re thinking, because nobody hangs off a cliff on guide ropes to cut burrs from an incredibly rare tree so they can use them for veneer. They don’t do that at Jaguar, either, but the word ‘luxury’ feels less dirty in relation to an XJ than it does to an S-Class or Audi A8 even though, in fact, it’s less luxurious – if you’re counting toys – than both.

Why is that? It isn’t the perceived quality, because there’s nothing in an S-Class that has anything remotely to fear from an XJ’s interior. And, like I say, it certainly isn’t that the XJ has more buttons or is more advanced. But there is something, and I’m not sure it’s solely the fact that it’s rarer.

Maybe it’s the design. The Jaguar is an attractive car inside and out. Mostly out, but it’s swishy around the dash top, too. But perhaps it’s because it also feels a little more old-school in its charm. It’s a bit more involving, a bit more engaging, a bit more personal. If I had to pick a car in this class that felt most like a Rolls-Royce Phantom, a car that is the very epitome of luxury, I suppose it would be the XJ. Although I can’t yet pinpoint why. Maybe you can’t define it. Or maybe I just don’t understand it.

Still, let’s start with the rear seats. They’re good. In the long-wheelbase XJ, where rear leg room is excellent, Jaguar says they are ‘airline-style’ individual chairs, which move and whatnot. Very comfy, too. Personally, I’d ditch the term ‘airline’ next time, because having your shampoo X-rayed before and paying £4.75 for an M&S bacon roll leave the word feeling less glamorous than it used to be. For a short-haul flight, sign me up to the back of an XJ every time.

But it’s the front seat where my – and, I suspect, your – real interest lies. It is in driving where the XJ range in general and Jaguar the XJR in particular remain the most endearing luxury-class car of all.

Even with electric assistance, it still steers. I’ll admit it has been Jaguar a good couple of years since I drove an XJ, so I can’t tell you whether it is better or worse now than it was before, but it’s certainly still oily smooth and pleasingly weighted, with the right amount of self-centring. There’s nothing else in the class quite this good.

Likewise, it has a remarkable deftness to its ride quality. Its ability to sooth bumps is superior to all but the most pillowy versions of the Mercedes-Benz S-Class and yet it retains control of its 1875kg body. Design and dynamics: that’s what Jaguar seems to get right every time.

The engine and ’box combo is rather good, too. All that has liberated the extra 25bhp is a change to the engine control unit, so it remains a terrific-sounding, mellow yet linearly responsive engine that shifts smoothly and smokes its rear tyres with ease; not that anybody ever will, away from a Middle Eastern or Russian highway. It can’t go on forever, can it, a powertrain like this? A 5.0-litre supercharged donkey with 567bhp but 25.5mpg and 264g/km? We saw about 18mpg, by the way. I suppose it will for a long while yet, in some parts of the world, but it’s starting to feel – albeit wonderfully – out of kilter with northern Europe. 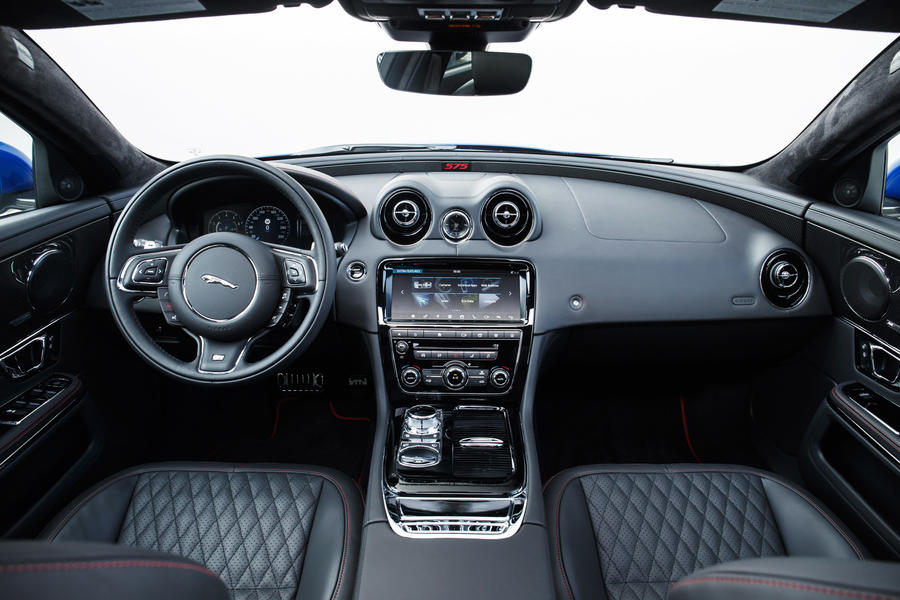 Jaguar All of which leaves the XJR where, exactly? A bit old-fashioned and a bit old-school? Perhaps. Is it as tech-laden as an Mercedes-Benz S-Class or the latest Audi A8? Is it heck. Is it as crushingly capable as a Porsche Panamera? Could it wrestle a live rhino to the ground like a BMW 760Li? I shouldn’t imagine so for a second. For all of these reasons and more, I couldn’t bring myself to give the XJ any more than four stars. But I also don’t think it matters that much, which is why I’d recommend one in a second. 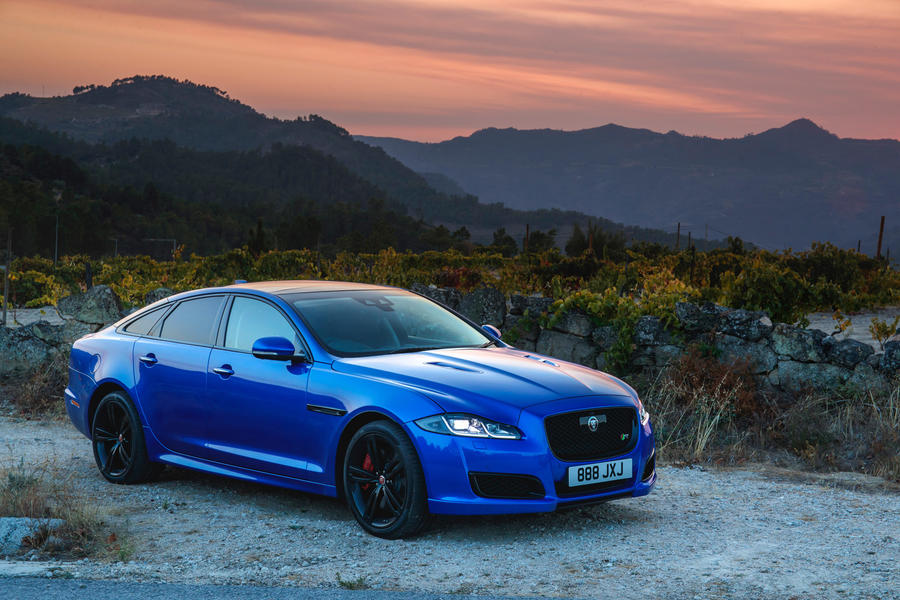 There is just something about the Jags- its just the way they drive.

i would really like to love this car but I just can’t get excited about it. Never mind luxury, it doesn’t say class or style. For this money I would get a circa 98/99 xjr in black with with ivory leather and have one of those restoration companies update all the parts. With the money left over I would take an Uber if I didn’t want to drive.