9
Jaguar’s new performance SUV is a gutsy, gregarious giggle, but knows how to be grown up when the need arises. A very well-judged fast family car.
Open gallery
Close

“An unspecified component supply problem” is the bone offered up to the historical record to explain the near year-long delay of the third ‘SVR’-branded performance car from Jaguar Land Rover’s Special Operations division: the Jaguar F-Pace SVR.

This hot SUV was just weeks from its launch to the press in July 2018 when, as a result of a batch of components delivered for production which apparently weren’t as Jaguar ordered them, the decision was taken to cancel the launch and delay the car until the problem could be fixed.

That’s the official reason, at any rate: a component supply issue that took nine months to resolve. Hmm. Not sure we’re getting the whole truth there. And it just so happens that SVO has had a new boss, at least one cancelled project (that we know about), and the ripples and repercussions of JLR’s declining corporate fortunes with which to contend during the intervening period between the hot F-Pace’s original introduction timing and now, should you feel inclined towards supposition about other potential explanations for the delay. Plenty clearly do, judging by the rumours I’ve heard.

For what it’s worth, though, I don’t buy the theory that new broom Michael van der Sande (formerly of Alpine) could have sent this car back for significant overhaul as one of his first orders of business. A nine-month delay might seem like a long one to us, but in the car industry it’s about enough time to re-engineer a pair of wiper arms and a boot light. 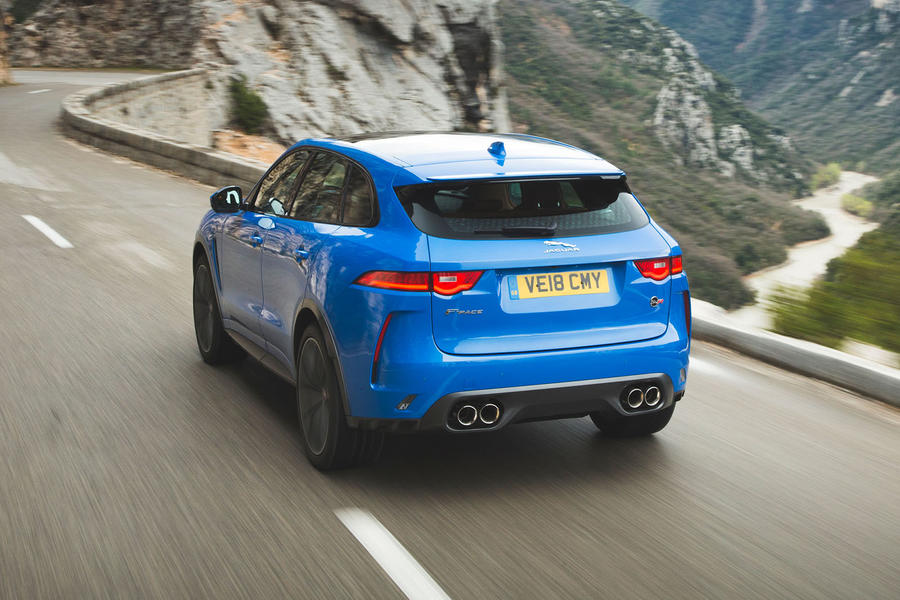 Jaguar’s answer to the Alfa Romeo Stelvio Quadrifoglio, Porsche Macan Turbo, Mercedes-AMG GLC 63 S and every other daftly over-endowed mid-sized SUV that £70,000 can buy has been mooted since the launch of the regular F-Pace in 2016, but assiduously denied by JLR spokespeople for a long while thereafter. It brings Jaguar’s bombastic supercharged 5.0-litre lump to a class where V8 engines are a relative rarity, and where it should therefore post some outstanding performance stats.

Except that it doesn’t; not quite. 542bhp is certainly an outstanding output for the Jaguar to be able to lay claim to, but 1995kg is a pretty significant number too when one or two of the car’s key rivals are the thick end of 200kg lighter.

And so, needing 4.3sec to hit 62mph from rest, the F-Pace SVR is actually slower off the mark than several of its rivals according to the manufacturer claims; and, to people who value these cars for the sheer absurdity of them, I fear that may not be unimportant. It’ll be interesting to find out how the car goes against our road test timing gear, and to extract a few more meaningful performance measurements for it when we get a chance – because I just can’t believe a car with this engine, up against rivals that almost all offer less under the bonnet, isn’t a more dominant accelerative force. We’ll see.

The F-Pace retains steel coil suspension, the rates of which have been increased by 30 per cent up front and 10 per cent at the rear, and gets uprated adaptive dampers as standard. Forged alloy wheels of up to 22in in diameter come in, on the outside of uprated brakes with lightweight hubs and discs measuring up to 396mm. The car’s primary driveline mechanical ingredient remains ZF’s ‘8HP70’ eight-speed torque-converter automatic gearbox, which drives through a ‘hang-on’ style clutch-based four-wheel drive system that tends to favour sending torque to the rear axle before it shuffles it forwards. But the all-new driveline component is a torque-vectoring ‘eDiff’ sat between the rear wheels, unlike one used anywhere by SVO before.

Inside the cabin, the F-Pace SVR avoids the more lurid upholstery colour combinations we’ve seen of late on the Range Rover Sport SVR; at least, our test car did, having instead a nicely understated combination of tan and black leather with some attractive carbonfibre decorative trims used quite sparingly, but well. Regrettably for this tester, however, the interior doesn’t avoid carrying over very similar sports seats (with integrated seatbacks-cum-head restraints) as those seen on the Range Sport SVR, which would be a lot more comfortable if they didn’t poke you in the back of the neck every time you attempt to settle deep into the bolsters.

Of the rest of the interior there’s plenty to like. Spaciousness and convenience are both good by class standards and, although the F-Pace’s cabin doesn’t get JLR’s latest infotainment setup and isn’t the most up-to-date interior the firm currently makes, it’s still a rich, comfortable and very pleasant place in which to find yourself staring down a road cut into the side of a French prehistoric gorge like a bit of loose ribbon draped off the side of a titan’s wedding cake.

This F-Pace is a car that feels its size on a fairly narrow, serpentine stretch like this; and I’m not sure you’d say that of a Porsche Macan or an Alfa Romeo Stelvio. It rolls and leans just a little bit under high cornering loads; and while it has more lateral grip and smarter directional responses than many would expect of it, it doesn’t exactly dive and rotate like a gymnast in a fat suit. It steers enticingly well, but not with alarming pace or cloying weight. Rather, its handling responses seem just a little bit moderate and measured, so that they’re natural-feeling and easily intelligible – and, moreover, so that they can be combined with a ride comfortable enough to suit any £70,000 SUV.

The car’s engine, meanwhile, is a gem: not just bluntly potent but with a depth of audible character and intrigue that would be beyond any equivalent turbocharged V8, and a brilliant balance of accessible grunt and rewarding high-range linearity. It makes enough torque to move the F-Pace along briskly without breaking a sweat or kicking down a gear, at middling revs and leaving plenty in reserve: a quality you want, I think, in a performance car like this. It’s runs smoothly and quite lavishly when you want it to as well. But it also comes alive with wonderfully raucous brimstone when you flick a couple of downshifts and bury the pedal. 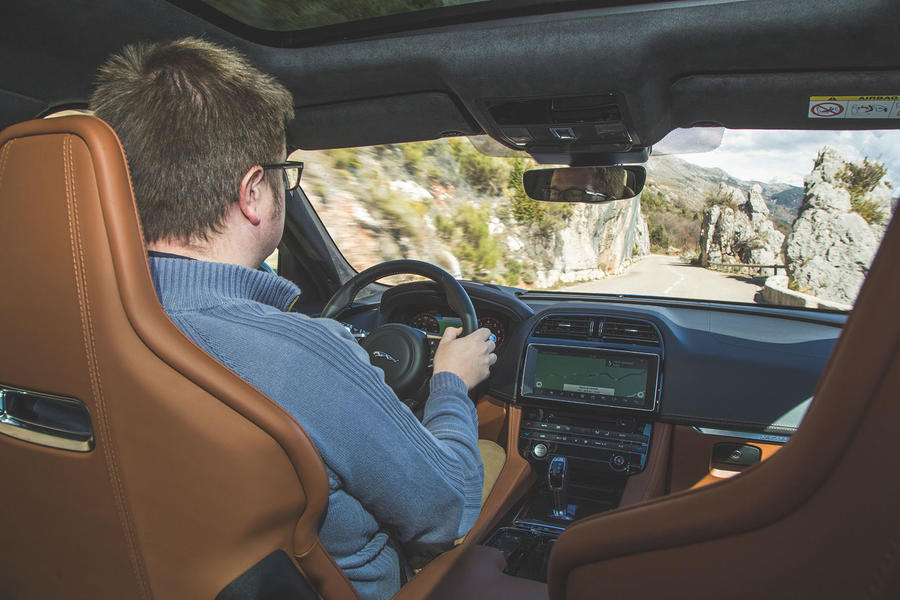 Sure. This fast SUV is a real giggle to drive, but doesn’t get so carried away with the dance routine that it forgets its place in the world. It’s the kind of car you’d be delighted to take a few mates out in for a fast, memorable trip somewhere – but you wouldn’t feel inclined to apologise for on grounds of comfort, practicality on anything else. It’s a great laugh, but stops well short of becoming a bad joke.

And while this might only be my personal taste talking, I hope it serves as a lesson to other makers of performance SUVs that cars of this ilk also need to be versatile, comfortable everyday drivers. After all, a fast SUV that isn’t those things, besides being fast, exciting and a little bit bonkers, might just be even less useful than it is ornamental. 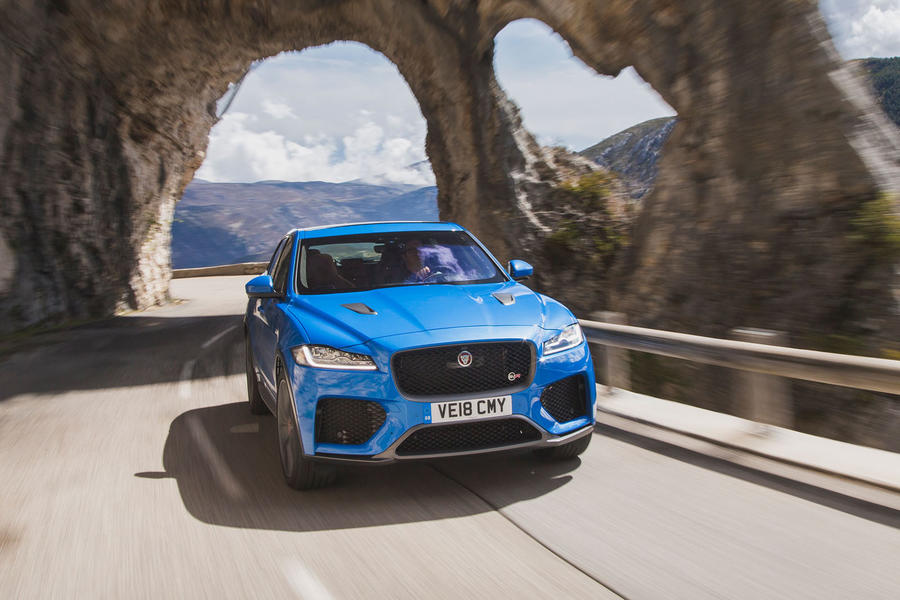 We are United Kingdom Top IT Rental Company Providing Best IT solutions for events, organization and tradeshows. We have all kind of IT related things on rent for short term and long term for more information. Kindly visit our website or call us now we are 24/7 available for our respected clients!

There are two types of

There are two types of criticism on the interior - (1) material quality (2) design.

I am not much concerned about material quality, but it is the totally unimaginative design that I cant take. If Callum decided not to respect Jaguar's wood & leather interior, at least make something interesting to replace tradition. But the F-Pace interior (like XE & XF) are hopelessly bland and uninspiring. A disastrous failure.

Macan Turbo all day long if spending your own money.